In "United States of Tara," Toni Collette turns in a brilliant performance as a woman with dissociative identity disorder. 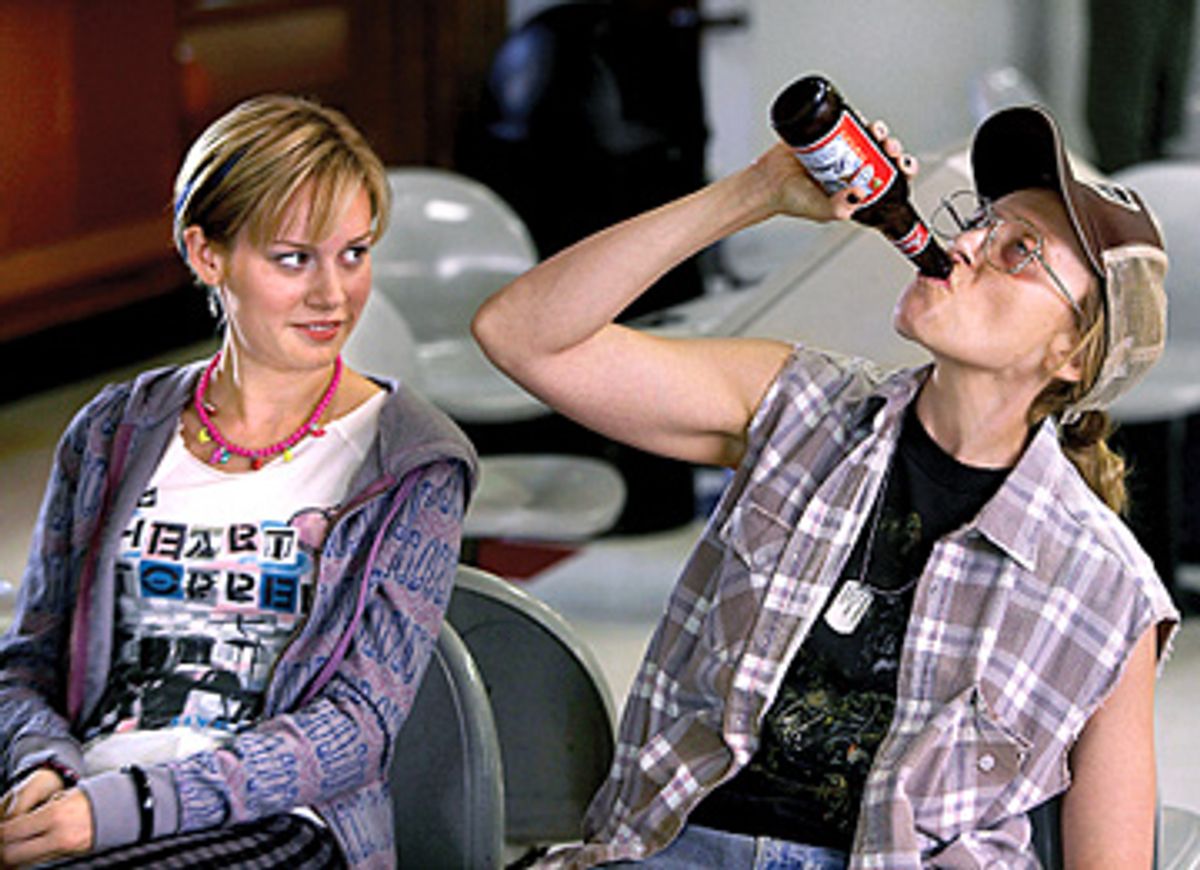 "Having multiple personalities is like hosting a kegger in your brain, only you're passed out cold while everyone else is just trashing the joint." ­-- Tara

At first glance, "United States of Tara" (10 p.m. Sundays) looks like another wacky, gimmick-based half-hour dramedy from Showtime, where they've been friendly to that format since the whimsical pot farce "Weeds" became one of the premium channel's most popular shows. The comedy certainly seems to follow the recipe that makes "Californication" such a pale shadow to "Weeds": Start with a zany premise (Mom with multiple personalities makes her teen kids' lives hell!), throw in a recognizable star (Toni Collette of "Muriel's Wedding"), and toss in the hot screenwriter of the moment, Diablo Cody (the woman behind "Juno").

Even if "United States of Tara" sounds vaguely plucky and fun, it's still tough not to be skeptical of Cody, who was endlessly profiled last year for her crazy made-up name (She heard the song "El Diablo" while driving through Cody, Wyo., and the name just stuck!), her stripper past (She wrote a book about how, like, weird it was!), and devil-may-care personal style. But the first four episodes of "United States of Tara" will capsize your suspicions in a frenzy of hilarious but hopelessly real teenage kids, snappy dialogue and undeniable sweetness. Gimmicks and endless costume changes aside, this new comedy is wrecklessly smart, fun, poignant, marvelously well-acted and addictive enough to take the place of "Weeds" as the jewel in Showtime's crown.

If I'm starting to sound like I'm aching to be quoted on Showtime's next promotional poster, it's because "United States of Tara" is a real joy to watch and easily my favorite new show of the winter season. Unlike "Californication" or even "Weeds," ­ and in spite of the show's slightly  fantastical premise, the characters here are far from exaggerated or farcical. Yes, of course Tara's personalities (know as "alters," as in alter egos) are utterly over-the-top, but that's often the case with people suffering from dissociative identity disorder, the new name for that old personality affliction made so popular back in 1957 with the book and film "The Three Faces of Eve," and in 1976  with the TV movie "Sybil." Whether or not this disorder actually exists (some still feel it's misdiagnosed by psychologists), Toni Collette sells it with every inch of her being, and the results are enormously entertaining.

But equally impressive are the supporting characters: Brie Larson plays Kate, Tara's teenage daughter, with so much eye-rolling flair and casual nastiness, she's the best teenage character on TV since Lauren Ambrose brought her own sassy world-weariness to "Six Feet Under." Likewise, Keir Gilchrist makes Tara's younger son Marshall all his own, whether he's primly informing his high school English teacher that the walking stick in a book they're reading quite clearly symbolizes an erection ("Excuse me, Mr. Gershenoff. I'm not an expert or anything, but I think I know my literary boners") or sipping on his Chai latte while sweetly reassuring his mom that her dizzying pathology simply makes the whole family more "interesting."

When Marshall bakes "muffins of triumph" for Kate's ballet performance, only to have Mom's chain-smoking Vietnam vet alter, Buck, call him "Marsha" while extinguishing his cigarette into one of the muffins, the scene is as richly droll as anything you'd find in the best indie movies of the year. This is true, thanks to the rare combination of a seriously talented writer with a vision, a sense of humor and a modern sensibility that somehow isn't dulled or muted by the sometimes hokey-feeling medium of television, and young actors carefully selected for their ability to make their characters' lines sound funny while coming across as authentic. Larson and Gilchrist make the kids on "90210" look like badly crafted hand puppets by comparison.

Of course, Tara and her alters are the real stars in this marriage, and we're shown, almost from the start, how they each jump in just when they're needed. Take that parent-teacher conference, which Alice, Tara's prudish, retro-housewife alter, interrupts with her telltale air of prim pushiness:

Alice: Mr. Gershenoff, it is such a pleasure! We're so very worried about our Marshall. Should we be concerned?

Gershenoff: Marshall is a unique challenge.

Alice: Mr. Gershenoff, we all know what this is really about: being different. I mean, you out of anyone should understand. Poor little Oral Gershenoff, sitting in the back of the class, with his funny hair and his funny name, daydreaming about sports he'd never play and girls he'd never touch. You know, pandering to the football captains and the prom queens of today won't take away the pain of yesterday. They can't appreciate you now any more than they did back then! And taking it out on the weird kid won't help that weird kid in there. It's time to start loving Oral.

Gershenoff: [quietly] I never meant to single Marshall out. [pause] I've assigned some extra credit so if he completes it, he can keep his average up.

This is exactly the sort of situation in which Tara herself -- down-to-earth and thoughtful but easily overwhelmed -- would let her emotions get the best of her, thereby making an enemy of the teacher and compounding Marshall's troubles in the class. Alice, on the other hand, with her sugary demeanor, can get away with stating the truth as she sees it, sympathetically but unapologetically.

And in fact, when you watch Tara's alter Buck punch Kate's manipulative boyfriend in the face ("What is this Mrs. Gregson shit? I am Buck and I will fuck you sideways!") or Tara's alter T giggle and plan a trip to the mall with Tara's credit cards, ("You have to drive 'cause I smoked a fatty!"), you start to wonder how anyone can raise a teenager without a few extra personalities in tow.

But the high-caliber storytelling is what separates "United States of Tara" from just another kooky romp of a dramedy, teetering precariously on a superficial premise. Just as HBO's "Big Love" is wise and poignant enough to make life with three wives look not odd but fundamentally necessary, so, too, does "United States of Tara" take a bizarre page out of the DSM-IV (the American Psychiatric Association's Diagnostic and Statistical Manual of Mental Disorders) and bring it to life, giving it heart, soul and a great sense of humor to boot. A far cry from the three-ring circus you'd expect, "United States of Tara" is packed not with empty high jinks but with genuine exchanges and memorable interactions.

My only wish is that "United States of Tara" weren't just a half-hour long. The series' clever, savvy dialogue reminds me so much of Alan Ball's work on "Six Feet Under" (there's a former "SFU" writer on the show's staff) that it makes me miss that drama all the more, while longing for more, more, more of Tara -- and her unruly friends, of course.