Why New York Gov. David Paterson chose a senator with conservative views that clash with his own. 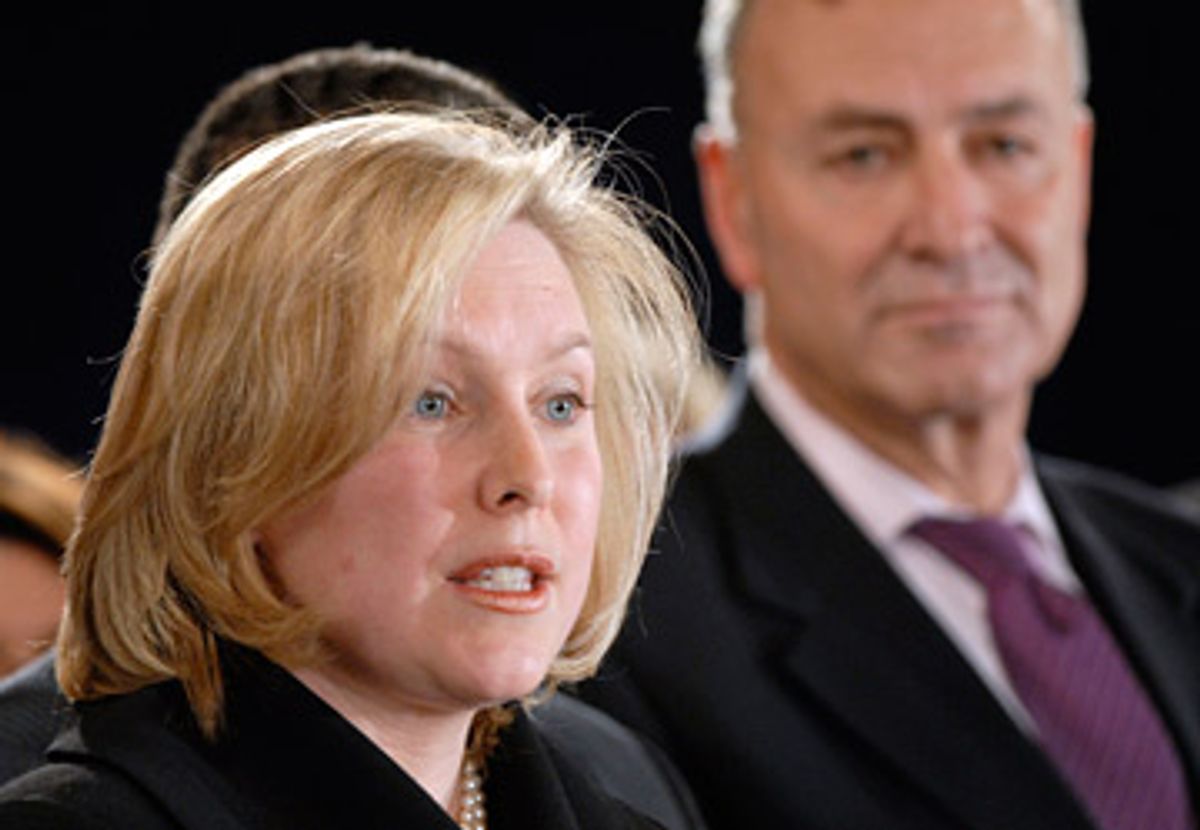 Whether New York's rank-and-file Democrats are pleased, puzzled or apoplectic about the appointment of Kirsten Gillibrand to succeed Hillary Rodham Clinton, they cannot fault their new United States senator for being who she is -- an ordinary upstate politician, largely defined by poll-driven issues that fit the right-wing rural district she represented in Congress. The sole responsibility for choosing an avowed conservative Democrat belongs to Gov. David Paterson, who seems to have relied heavily upon the advice of Charles Schumer, the state's senior senator.

So if liberal Democrats are looking for somebody to blame for Gillibrand, they should look no further than Paterson, whose haphazard process for selecting a successor to Clinton seems to have been guided not by any progressive outlook he espoused in his earlier career, but instead by his own prospects for reelection next year.

At first, the governor seemed to have reached an understanding with New York City Mayor Michael Bloomberg to appoint Caroline Kennedy, the mayor's preferred candidate, until she suddenly and somewhat mysteriously opted out of the process. A political cipher whose curious candidacy was based on name recognition, Kennedy was only entertained by Paterson because of the expectation that she could raise tens of millions of dollars to support the Democratic ticket in 2010 -- and perhaps because she might help him win a prized Bloomberg endorsement.

In the wake of her withdrawal, the governor immediately shifted to Gillibrand, a figure whose brief record in the House scarcely accords with his own perspectives and priorities. What she offers Paterson is her own formidable fundraising capacity, augmented in the past two election cycles by the Clinton organization, and her ties to the state Republican Party through her father, Doug Rutnik, a longtime lobbyist in Albany with powerful GOP connections. She is a veteran campaigner, dogged and highly skilled, whose female name above Paterson's on the Democratic ticket may well draw votes to him come November 2010.

While Gillibrand herself has supported lobbying reform in Congress, her family connections have raised troubling issues, explored in recent columns by the state's premier investigative reporter, Wayne Barrett of the Village Voice. (Barrett will be digging further into the Rutnik aspect of the Gillibrand story next week.)

Family and partisan liabilities aside, the new junior senator is energetic, telegenic, youthful and combative, qualities that may yet transform her into a Washington star. Yet she has displayed little of the independence and intellect that marked the legendary occupants of that seat, such as Robert F. Kennedy or Daniel Patrick Moynihan.

On the economic issues that ought to be uppermost in the mind of the man who chose her, Gillibrand has taken positions precisely opposed to his; as Paterson might observe, positions that were inimical to the interests of her state if not her district. Last year, she voted against the Wall Street bailout bill, presumably because that legislation polled poorly. Her Web site boasts that she has been "a strong supporter of the Pay-As-You-Go (PAYGO) rule, which bans deficit spending." That mindless notion would dictate a vote against the stimulus bill proposed by President Barack Obama and supported by the Democratic leadership in both houses, which will create the biggest budget deficit since World War II. And unlike most Democrats, she continues to support the Bush tax cuts.

Gillibrand is supple enough to earn high ratings from both the National Rifle Association and the American Civil Liberties Union. Her position on immigration reform hews to Republican orthodoxy ("no amnesty for illegal immigrants"), and although she claims to have supported "redeployment of troops from Iraq to Afghanistan," she voted with the Bush administration and against her own party leadership on funding the war. At the same time, she has strongly defended Social Security and Medicare against Republican incursions, endorses universal health insurance, and has worked hard to promote family farms, organic agriculture and alternative energy programs. She is, in short, a hybrid politician who has remained conservative enough to keep her seat while appearing progressive enough to raise money downstate.

Perhaps none of these positions will matter much in the future; perhaps they will simply evaporate. Today the Empire State Pride Agenda, the leading group promoting gay equality in New York, said Gillibrand has assured them that she supports same-sex marriage. That would place her to the left of Schumer and Clinton, alongside Paterson and his predecessor Eliot Spitzer. If she has always thought that gay marriage should be legislated, she kept that opinion to herself during her last two campaigns for Congress.

With his new colleague standing beside him at the press conference announcing her appointment, Schumer confidently predicted that notwithstanding their sharp disagreements on gun control and other issues, he expects that Gillibrand's "views will evolve" as she seeks to represent the whole state. Back when he represented a Brooklyn congressional district, he recalled, his opposition to all agriculture subsidies was unbending. Now that he represents all New Yorkers, he boasted, "Upstate they call me the Brooklyn farmer."

When Schumer urged her to embark on a "listening tour" to Bayside and Bedford-Stuyvesant, where her ideological evolution might begin, and her chances of reelection will improve, the new senator from New York simply nodded.