Friday's airstrikes are evidence Obama will take the hard line he promised in Pakistan and Afghanistan. But he should remember what happened to another president who inherited a war. 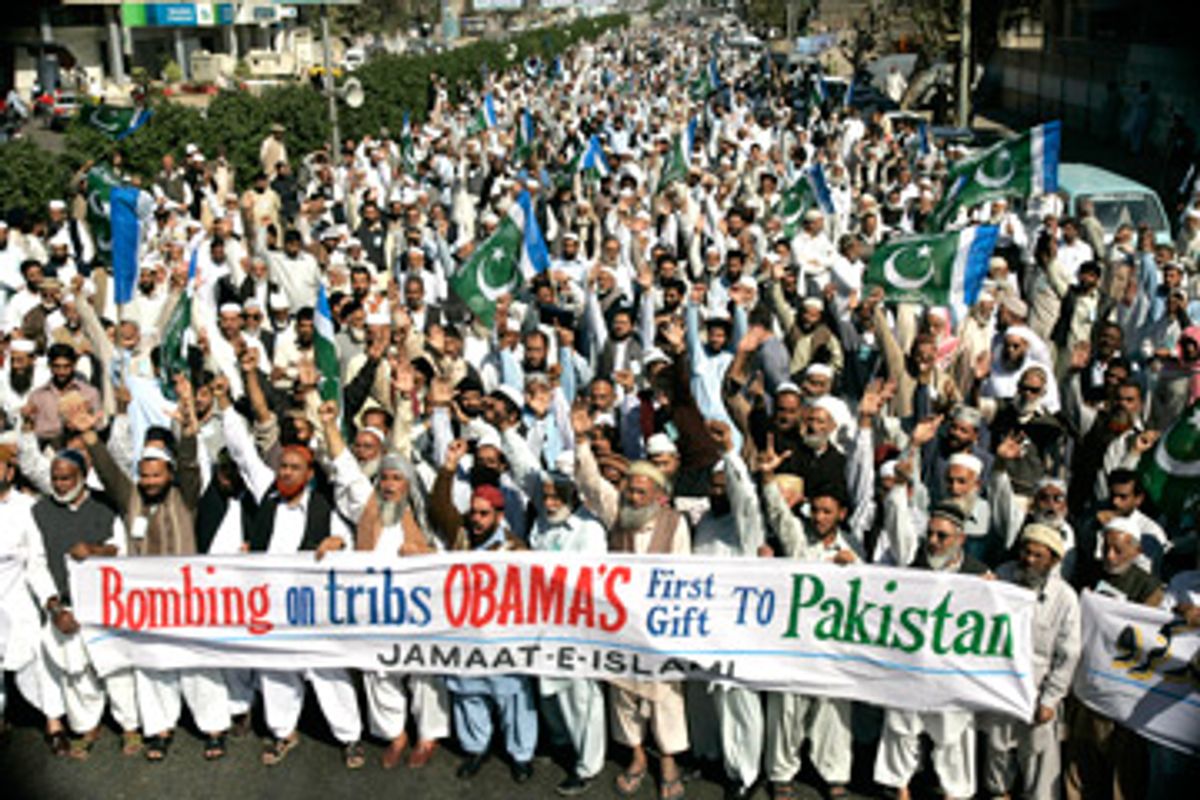 On Friday, President Barack Obama ordered an Air Force drone to bomb two separate Pakistani villages, killing what Pakistani officials said were 22 individuals, including between four and seven foreign fighters. Many of Obama's initiatives in his first few days in office -- preparing to depart Iraq, ending torture and closing Guantánamo -- were aimed at signaling a sharp turn away from Bush administration policies. In contrast, the headline about the strike in Waziristan could as easily have appeared in December with "President Bush" substituted for "President Obama." Pundits are already worrying that Obama may be falling into the Lyndon Johnson Vietnam trap, of escalating a predecessor's halfhearted war into a major quagmire. What does Obama's first military operation tell us about his administration's priorities?

Obama's first meeting with his team on national security issues focused on Afghanistan and Pakistan, in the course of which the new president is reported to have endorsed the drone attacks. Friday's were the first major U.S. airstrikes on Pakistani territory since Jan. 1, because the Pakistan Taliban Movement in the Federally Administered Tribal Areas (FATA) had launched a campaign to discover local informants for the Central Intelligence Agency, killing 40 of them. The two cells the U.S. hit are accused of raiding over the border into Afghanistan, lending support to the Taliban there.

The tribal notable Khalil Dawar, who lived near the village of Mir Ali in Pakistan's North Waziristan Agency, hosted a party of five alleged al-Qaida operatives in the guesthouse on his property. An American drone hit the site with three Hellfire missiles. According to the Pakistani press, the strike not only killed the four Arab fighters and a Punjabi militant, but also the Pashtun host and some of his family members. A few hours later, missiles slammed into another residence near the village of Wana in a nearby tribal agency, South Waziristan, killing 10. Pakistani sources disagreed over whether there had been any foreign fighters at all at the second target, with locals claiming that 10 family members, including women and children, were the only victims. Villagers in Pakistan's northwestern tribal belt sometimes rent to the Arab fighters because they are sympathetic to their struggle, but sometimes they just need the money.

The U.S. committed itself, when it overthrew the largely Pashtun Taliban in 2001, to building up a new government in Afghanistan and restoring the country to stability. The new government of President Hamid Karzai, however, was viewed as disproportionately benefiting northern ethnic groups such as the Tajiks, Hazara and Uzbeks. NATO search and destroy missions in the ethnically Pashtun south of the country alienated villagers, as did forcible eradication of lucrative poppy crops. The Taliban revived, and new groups emerged allied with them, turning to suicide bombings and attacks on the new Afghan army and on NATO and U.S. troops. Obama has committed to dealing with this problem by increasing the size of the U.S. and NATO troop contingent in Afghanistan, which already stands at more than 50,000, but the plan is facing stiff resistance from NATO allies and their publics.

Sandwiched between the lush river-fed plains of Pakistan and the deserts and mountains of southern Afghanistan, the 13 Federally Administered Tribal Areas are a no-man's land that is technically part of Pakistan but seldom truly controlled by Islamabad. Ethnically, the inhabitants are Pashtuns, the same group that dominates southern Afghanistan, and many of them deeply sympathize with those Afghan neighbors who are fighting Western troops and the Karzai government. In recent years, tribal and village organizations in FATA have been shunted aside by Muslim radicals who formed the Pakistan Taliban movement, emulating the Taliban of Afghanistan. They not only raid into southern Afghanistan but have also committed terrorist acts in Pakistani cities such as Peshawar and Islamabad.

The Bush administration launched 30 air attacks on targets in Pakistan in 2008, killing 220 persons. The strikes seem to have started in the summer, during the presidential campaign, about a year after candidate Obama began urging this policy. Bush may have instituted the aerial attacks to deny Obama a campaign talking point and to prevent him from out-hawking John McCain. That is, Obama may have pushed Bush -- who had earlier been wary of alienating Pakistan -- to the right. The American bombing of the tribal areas occurs with tacit Pakistani government acquiescence as a result of a secret agreement reached last September, despite the sometimes vehement public denunciations that Prime Minister Yousuf Raza Gilani issues after they've occurred.

In this instance, a spokesman for the Pakistani foreign ministry complained to Ambassador Anne W. Patterson, saying, "With the advent of the new U.S. administration, it is Pakistan's sincere hope that the United States will review its policy and adopt a more holistic and integrated approach towards dealing with the issue of terrorism and extremism."

The Pakistani government is now ruled by the largely secular, left-of-center Pakistan People's Party, and President Asaf Ali Zardari blames the Taliban for the assassination of his wife, Benazir Bhutto, late in 2007. Any dispute between Islamabad and the Obama administration centers on issues of national sovereignty, not on the question of whether the Taliban should be crushed. Pakistan's own military is also fighting the Pakistan Taliban Movement and its tribal supporters. Early last week, Islamabad's Frontier Corps pounded several villages of the Mohmand Agency, killing 60 militants. In the course of the past five months, Pakistani military operations against the Pakistani Taliban in the neighboring Bajaur Agency have left hundreds dead and hundreds of thousands homeless and displaced.

The risk Obama takes in continuing the Bush administration policy of bombing Pakistani territory is provoking further anger in the public of that country against the United States and harming the legitimacy of Zardari's fragile elected government. A Gallup poll done last summer found that 45 percent of Pakistanis believe that the U.S. military presence in Afghanistan poses a threat to their country. Of Pakistanis who expressed an opinion on the matter, an overwhelming majority believed that the cooperation between the U.S. and the Pakistani military in the "war on terror" has mainly benefited Washington. If a more muscular American policy toward Afghanistan and Pakistan sufficiently angers the Pakistani public, they could start voting for religious parties, delivering a nuclear state into the hands of Muslim fundamentalists.

The fundamentalist Jamaat-i Islami (JI), led by Qazi Husain Ahmad, held a rally of several thousand protesters in the Pakistani capital on Friday to protest the drone attacks and the ongoing military campaigns in FATA. (I saw the demonstration on satellite television, and it was clearly bigger than the wire services reported.) The coalition of religious parties of which the JI formed part was dealt a crushing rejection by the Pakistani electorate last February, but for the U.S. to continually bombard Pakistani territory could be a wedge issue whereby they return to political influence. Whereas the Jamaat-i Islami had welcomed Obama's new path in the Muslim world before the strikes, the JI leader blasted the new president in their aftermath.

Obama's policy toward Pakistan is not solely military. He appointed as his special advisor on Pakistan and Afghanistan veteran diplomat Richard Holbrooke, who played an important role in peace negotiations over Bosnia in the 1990s. The new president, who has praised Pakistan's return to civilian parliamentary rule, has pledged to triple civilian aid. Opinion polling shows that more civilian development monies and less focus on military equipment are precisely what a majority of the Pakistani public want. Obama also intends to tie the annual amount of military aid released to the actual performance of the Pakistani military in preventing cross-border raids of FATA militants into Afghanistan. Allegations have swirled for the past year that rogue cells in the feared Inter-Services Intelligence of the Pakistani military have been actively sending the militants to hit targets inside Afghanistan, including the Indian embassy at Kabul.

Despite the positive harbingers from Obama of a new, civilian-friendly foreign policy that will devote substantial resources to human development, the very first practical step he took in Pakistan was to bomb its territory. This resort to violence from the skies even before Obama had initiated discussions with Islamabad is a bad sign. It is not clear if Obama really believes that the fractious tribes of the Pakistani northwest can be subdued with some airstrikes and if he really believes that U.S. security depends on what happens in Waziristan. If he thinks the drone attacks on FATA are a painless way to signal to the world that he is no wimp, he may find, as Lyndon Johnson did, that such military operations take on a momentum of their own, and produce popular discontents that can prove deadly to the military mission.