Springsteen can't save us

This should be Bruce's promised land. So why is his vision of America still so bleak? 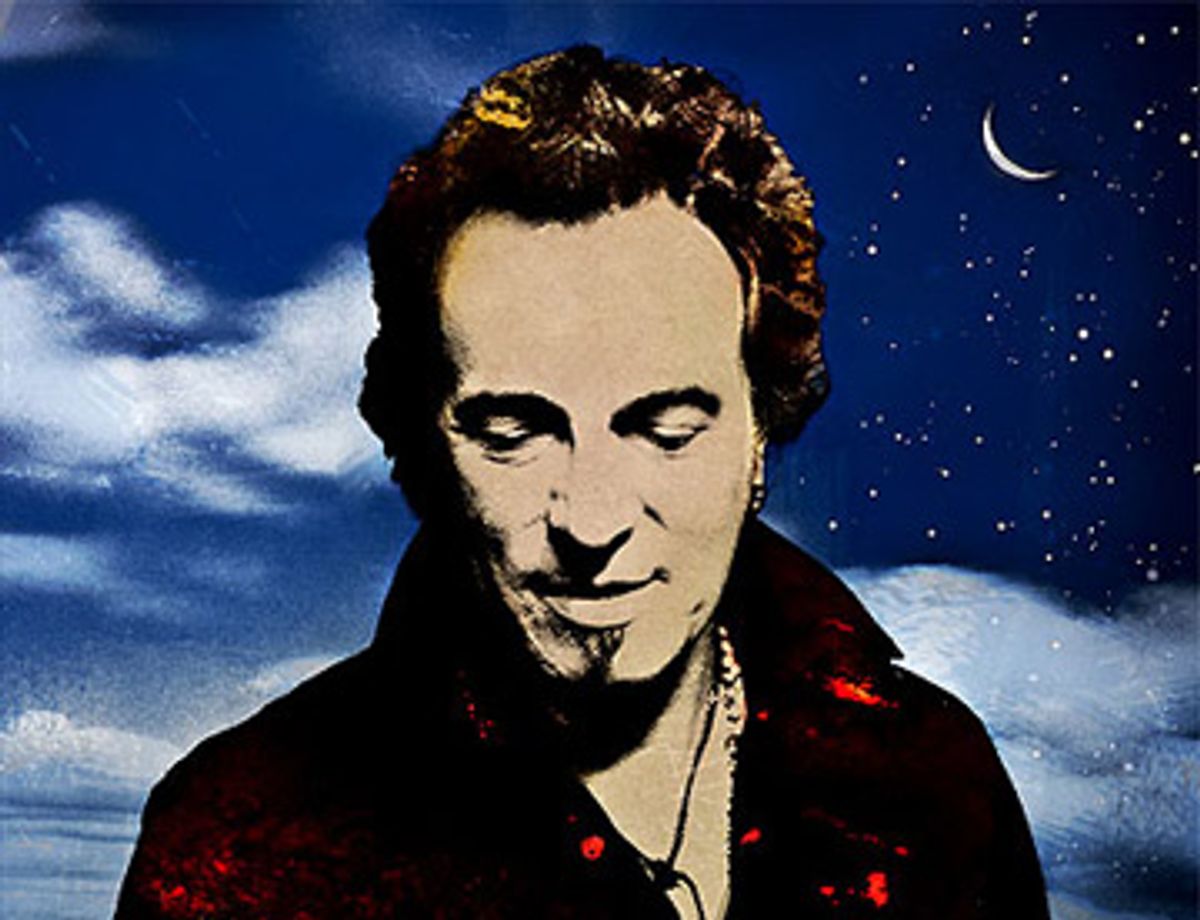 Bruce Springsteen at the Super Bowl. It doesn't get much better than that for a self-described "attention whore" -- unless, of course, you are invited to play the president's inauguration concert. Oh yeah, he did that. Far from the 26-year-old kid who was initially embarrassed at seeing himself on the covers of Time and Newsweek in 1975 and who tore down posters put up by his record company that announced, "Finally, the world is ready for Bruce Springsteen," he seems at peace now with his role as America's rock 'n' roll prophet. Amazing what time and therapy can do. What hasn't changed, through all the success, has been his exploration of America. "My songs," he told Rolling Stone in 2007, "they're all about the American identity and your own identity and the masks behind the masks behind the masks, both for the country and for yourself." He further elaborated to "60 Minutes," "I'm interested in what it means to live in America."

If an artist is lucky, his work will rhyme with the times. If an artist is especially attuned, his work rhymes over and through different times, again and again: "Born to Run" in 1975, "Born in the USA" in 1984, "The Rising" in 2002. Springsteen writes a song for a movie ("Streets of Philadelphia") and wins an Oscar. Does another ("The Wrestler") and wins a Golden Globe. What makes Springsteen's popular success all the more astonishing is his bleakness. At its most searing, his work probes the underside of the American dream -- its elusiveness for everyday Americans, the price we pay for chasing it, even the need to escape it altogether in order to survive. By offering up the American promise as a lie, Springsteen belongs alongside such diverse writers as F. Scott Fitzgerald, John Steinbeck, Arthur Miller, Thomas Pynchon and Toni Morrison, all of whom have probed the darkness of the American condition.

His 16th studio album is titled "Working on a Dream," and in the context of Obama's inauguration and Springsteen's performance at the Lincoln Memorial, it is impossible not to think about the best-known use of the word in American history: Martin Luther King Jr.'s "I Have a Dream" speech.

The word "dream" appears repeatedly in the Springsteen songbook. "Born to Run" first diagnosed the problem of the "runaway American dream," and Springsteen then planned an escape from "dreams that tear you apart" ("Promised Land"), a "dream where everything goes wrong" ("The Price You Pay"), a world that "slowly grinds your dreams away" ("Blood Brothers"). For Springsteen, dreams of love go unrequited ("One Step Up"), people dream of fields of blood ("Devils and Dust"), dreams are only good for reuniting with the dead ("Mary's Place").

Most people don't like hearing that the struggle to make it is bound to fail and that the American promise of happiness is a lie. So how does he transform despair into such undeniably popular anthems? Springsteen's art lies in a deception, a tension between the verse lyrics and the chorus. He sings to our heads, but rocks to our hearts. In the verses, he explains, he sings the blues. But the chorus is gospel. And so we shout, "Born in the USA," fists pumping in celebration, yet the lyrics ("born in a dead man's town") depict a defeated patriotism. We sing, "Don't worry Darlin'," but "Livin' in the Future" is an apocalyptic vision ("a bloody red horizon") of a totalitarian nation. The music is so exhilarating it sometimes masks the message.

The title song off the new album continues the convention. It opens "out here" where "nights are long, and days are lonely." But then a lilting voice croons, "working on a dream." There is even whistling. Some commentators have called the album sweet and optimistic, but it is the music that has taken them in: There is nothing sweet and optimistic about loneliness and exile.

Springsteen's infatuation with pop saturates the album. Musically, the best songs feature orchestral walls of sound and clever hooks. Echoes of a dozen groups and riffs from the 1960s, especially the Beatles, Byrds and Beach Boys, can be heard here, and for good measure Springsteen throws in some folk, blues and soul. But lyrically the songs are no joyous romp. There is very little happiness here. In "This Life" Springsteen recalls "This emptiness I've roamed/ Searching for a home," a place that he has been looking for ever since his characters began fleeing the "death trap" and "suicide rap" from which they were born to run. The most poignant song off his last album, "Magic," is "Long Walk Home," an attempt to recover "who we are" and to begin again.

Now the search continues, but he hasn't made it home yet. In one song, he can't turn a "black sky blue"; in another, he can't return from "the dark of fierce exile." And when he finally arrives someplace, as on the last song of the new album, a melancholy tribute to band mate Danny Federici, who died last year, he discovers "empty are the fairgrounds."

In August 2004, Springsteen embraced a public political persona when he published an editorial in the New York Times titled "Chords for Change" and took an active role in the election. "I've tried to think long and hard about what it means to be an American," he said, and now it was time to fight for "the country we carry in our hearts."

He meant giving flesh to abstractions such as justice, equality, fairness and freedom. "What it means to be an American": It used to mean the work ethic, individualism, democracy and the frontier, all undergirded by a spiritual sense of providential destiny, which is fine as long as it doesn't metastasize, as it seems to have of late, into hatred and oppression.

Springsteen knows being American stands for something, but he is still searching for connection, for a path from despair to hope. His characters tried the highway and ended up lost or wounded or dead. But the answer isn't back home either, because the place is forever changed from what it once was. Springsteen's message on "Working on a Dream" seems to be that the answer is love. He knows the Beatles delivered the news more than 40 years ago, which is perhaps why so many of the song titles on the new album evoke the Fab Four: "Tomorrow Never Knows," "This Life," "Life Itself" and "Surprise, Surprise." (Recall that John Lennon whistles at the end of "The Two of Us," a song about a relationship and going home.) Half of the new songs have the word "love" in them. And the others include lines such as "with you I have been blessed" and "you're mine for always."

In "Working on a Dream," Springsteen's music avoids overt politics. He has said, "I'm interested in the kind of country that we live in and leave to our kids. I'm interested in trying to define what that country is. I've got the chutzpah or whatever you want to say to believe that if I write a really good song about it, it's going to make a difference." But these songs are not going to do that, not in the way a '60s generation raised on protest songs might like to imagine. Instead, Bruce has returned to an original faith in rock 'n' roll as the music of liberation. He once observed that Elvis freed our bodies and Dylan freed our minds. Springsteen is working on our souls.

The saving grace of rock 'n' roll will not revolutionize society, and it certainly will not deliver the American dream, but it has changed many a person's life. Springsteen knows this because he is one of the saved. He got religion after seeing Elvis on the Ed Sullivan show in 1957, and he got his first electric guitar after seeing the Beatles on the show in 1964.

Springsteen turns 60 this September. He has sustained his career and maintained his integrity, for the most part at least. Some fans of late aren't happy with an exclusive deal he made with Wal-Mart for a new greatest hits collection. But he never sold "Born to Run" to Nike or "Born in the USA" to Chrysler. And in performances, as much revivals as concerts, he has never just gone through the motions.

Springsteen continues to keep his promise to himself and to his fans. What he said in 1992 remains true today: "I didn't get burned out. I didn't waste myself. I didn't die. I didn't throw away my musical values." Springsteen's music can make us feel alive, but it cannot save the country or restore the American dream. That part is up to us.

Louis P. Masur is Distinguished Professor of American Studies and History at Rutgers University. He is the author of many books, including Lincoln’s Last Speech, The Civil War: A Concise History, and Lincoln's Hundred Days: The Emancipation Proclamation and the War for the Union.