Democrats: The party of business

Obama shows his skill at stimulus politics, addressing an admiring crowd of CEOs while the GOP postures and makes itself increasingly irrelevant 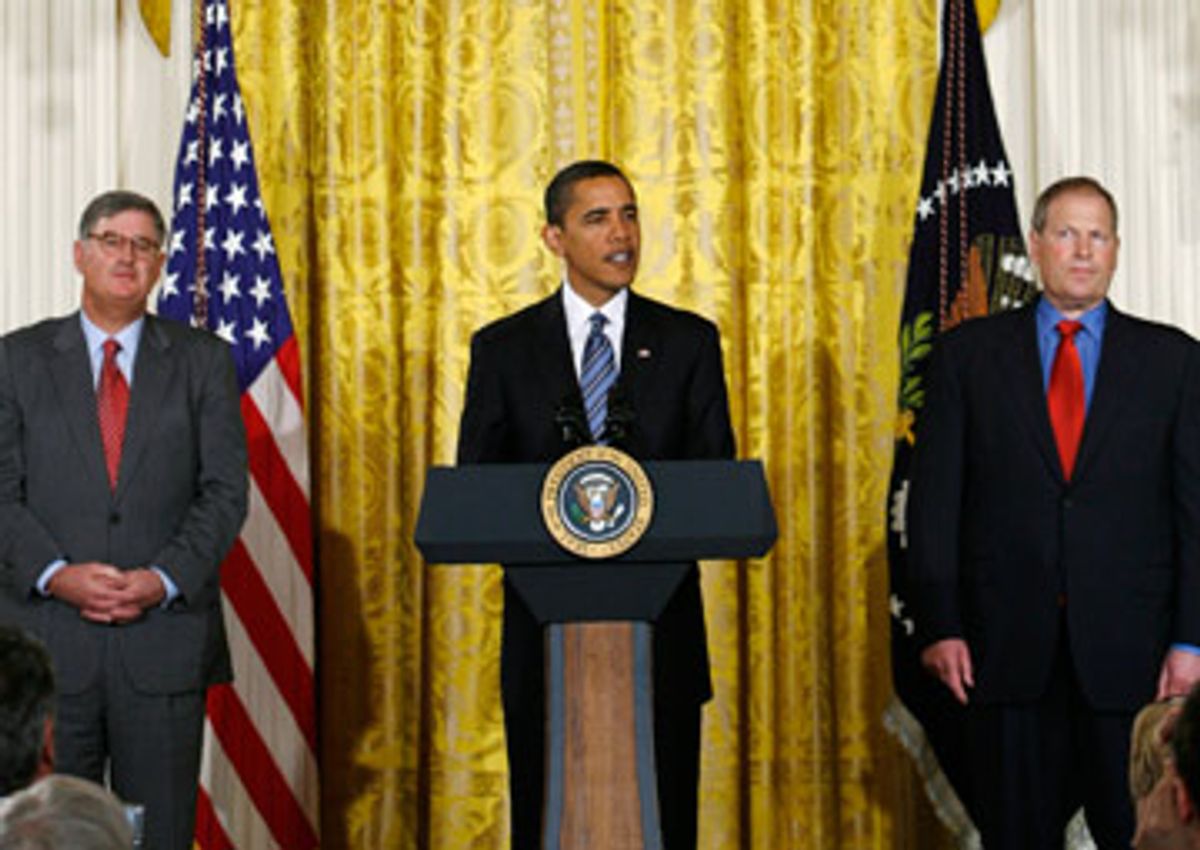 President Barack Obama speaks about the economy in the East Room of the White House in Washington Jan. 28, 2009. Flanking Obama are IBM chairman and CEO Sam Palmisano (left) and Honeywell CEO Dave Cote.

I don't think MSNBC did this purposely, but the network's setup for President Obama's speech Wednesday morning was priceless. It featured GOP Rep. Jim Gerlach explaining why he's "leaning against" Obama's stimulus and recovery plan, while the CEOs of IBM and Honeywell were praising it in a split-screen shot.

So far Obama is playing stimulus politics very well, and Wednesday morning was perfect. It was great to see him defending his recovery plan's long-term goals -- against GOP demands that money go to "shovel-ready" infrastructure projects and tax cuts -- in front of a crowd of business leaders who likewise praised his commitment to a greener, wired, 21st century economy.

"But even as this plan puts Americans back to work today, it will also make those critical investments in alternative energy and safer roads, better healthcare and modern schools that will lay the foundation for long-term growth and prosperity," Obama told the admiring group. "And it will invest in broadband and emerging technologies, like the ones imagined and introduced to the world by people like [IBM CEO] Sam Palmisano and so many of the CEOs here today. Because that is how America will retain and regain its competitive edge in the 21st century."

There will likely be more compromise on the recovery package. I wasn't surprised to see contraception funding and money for National Mall rehabilitation tossed out of the bill. A few more things may get cut.

But Obama doesn't look like he's trying for 80 votes in the Senate anymore, as one of his aides once foolishly said earlier this month; he looks like he's wielding his electoral mandate for change, and he should. And he and his staff are mostly ignoring John Boehner's House Republicans, who seem determined to make their party irrelevant with their sloganeering and obstruction while the economy falls apart.

There was a little too much pandering to the CEOs for my taste, of course. I wasn't thrilled when Obama blamed the economy's troubles on "a sense of irresponsibility that prevailed from Wall Street to Washington" and then said the burden for recovery will fall on "executives and factory floor workers, educators and engineers, healthcare professionals and elected officials."

I'd like the burden to fall heaviest on those responsible for this mess, some of them probably in Obama's audience this morning. But that's not realistic politics.

After the speech, MSNBC's Pat Buchanan asked, "Was that Barack Obama or Ronald Reagan?" Buchanan tried to make the case that Obama's speech was "very conservative," because he also promised to root out government waste -- as though waste were a liberal value. But what Buchanan was really praising was Obama's Reaganesque grasp of politics and pageantry. He's trying to make Democrats the party of business and prosperity, and he looks like he's succeeding. It's going to be fun to watch the House Republicans now.