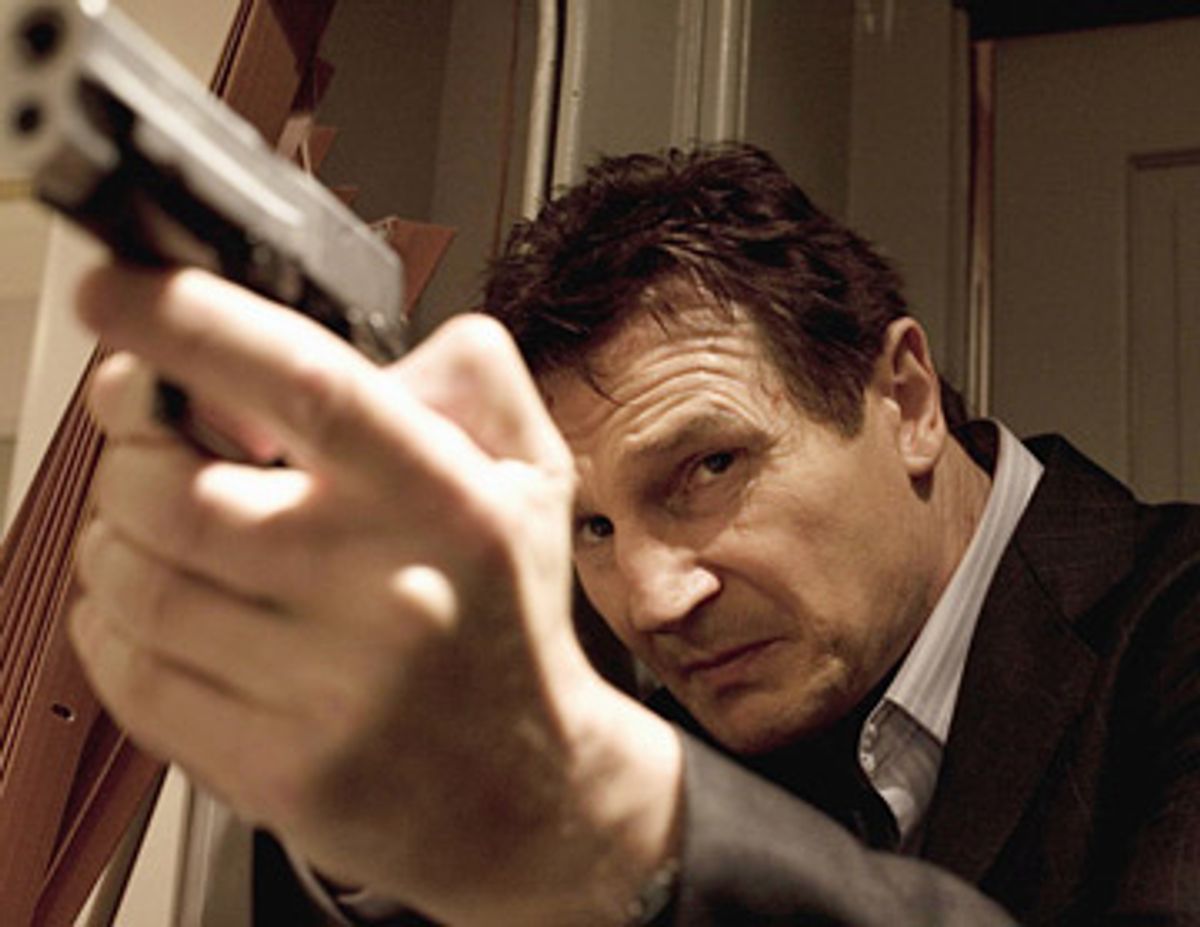 It's so hard to find good, disreputable thrills anymore. So many contemporary action movies -- like those choppy thingamabobs Ridley Scott so loves to churn out -- are built around semi-plausible, politically charged premises, like keeping plutonium out of the hands of this or that evildoer from somewhere in the Middle East. It's gotten impossible to find a villain who's just, say, a good, old-fashioned Albanian prostitute wrangler -- just a real bad guy, someone out to make a profit by wholly immoral means, with no underlying political or religious motives that we must struggle to understand.

For those kinds of tawdry kicks, thank god we have writer/producer/nutball Luc Besson. "Taken" is the latest hyperkinetic chicken to emerge from the semi-cracked egg that is Besson's brain: He co-wrote the picture with Robert Mark Kamen, and it's directed by Pierre Morel, who previously made the exhilarating French cult hit "District B13" (also written and produced by Besson). In "Taken," Liam Neeson plays Bryan Mills, a former CIA operative who has retired from a lifetime of covert ops to build a relationship with his 17-year-old daughter, Kim (Maggie Grace), whose childhood he missed, thanks to his devotion to his job. His icy ex-wife, Lenore (Famke Janssen), now remarried to some superrich guy (played by Xander Berkeley), thinks it's too late for Bryan to make amends and does all she can to keep him away from Kim. But then Kim gets the chance to go to Paris with some friends -- because she's underage, she needs Bryan's permission to travel overseas. Lenore assures him Kim will be fine, but his former line of work has made him all too aware of the terrible things that can happen out there in the world, especially to a giggly teenager whose travel wardrobe includes a sequin-studded jacket that screams, "Look! I'm a clueless American tourist!"

Bryan finally, and reluctantly, complies, giving Kim a preprogrammed cellphone and urging her to keep him apprised of her whereabouts. The movie's title -- as well as its trailer, if you've seen it -- gives away what happens next. But that doesn't really matter. The delirious and sometimes nasty little pleasures that "Taken" offers don't hinge as much on surprise as they do on the action (which is crisp and fast, with a minimum of computer enhancement) and on the story's unabashedly sentimental underpinnings. This is one of the things I love about Besson, whose work, I'll concede, is sometimes both flashy and pointless. He's been the string-puller behind some lousy movies (the stinky bit of Joan of Arc cheese known as "The Messenger," for instance), as well as some extremely fun ones (my most recent favorite is "Transporter 3," which restores some of the cartoonish thrills that have been missing from the more recent and somewhat serious James Bond movies, as much as I respect those).

Besson is unafraid of sentimentality, to the extent that he sometimes goes overboard with it. But Morel keeps "Taken" moving swiftly. It's never dragged down by excess feelings; instead, it's powered by the potency of the right ones. Much of the credit must also go to Neeson, a fine actor who is also often, unfortunately, extremely dull. His performance in "Taken" is anything but: It's big enough to fill up the screen but not so oversized that you end up giggling at it. He finds the perfect balance between self-seriousness and looseness. When Lenore's husband, after learning Kim has been kidnapped, begins defending some of his possibly shady business interests, Bryan snaps at him: "Now's not the time for dick-measuring, Stuart!" The line is funny -- intentionally so -- but it's also the kind of dialogue that can keep a picture moving swiftly, and Neeson knows instinctively just how to make it work.

This performance is unapologetically emotional. Bryan is motivated to do bad stuff (and some of it, I'll warn you, is quite bad, although the movie has been trimmed to a relatively chaste PG-13) for the love for his daughter and out of an instinctive desire to protect her. There's something about Neeson's hangdog Irish mug that makes both the innocence of that love and its fierceness intensely believable. When you've got that much sorrow in your eyes, you sure as hell are going to want to kick the butts of some scumbags who've abducted your kid for their own nefarious purposes.

Bryan works alone, roaming the streets of Paris (the picturesque ones and the not-so-pretty ones) with single-minded determination. He also uses a minimum of technology. This isn't a picture where the hero needs a complicated collection of high-tech gadgets to get the job done. Bryan is clever about the uses of multiple cellphones, but mostly, he's just pretty good at breaking jaws and busting kneecaps. And perhaps that's what makes this particular Neeson performance so delightful. The guy rarely gets a chance to move this much, and it sets something free in him. At one point, Bryan takes on six guys -- and possibly even more -- single-handedly. It's the most unrealistic action sequence you could possibly imagine, which makes it that much more enjoyable. Neeson emerges from it, and from the movie, with barely a scratch.