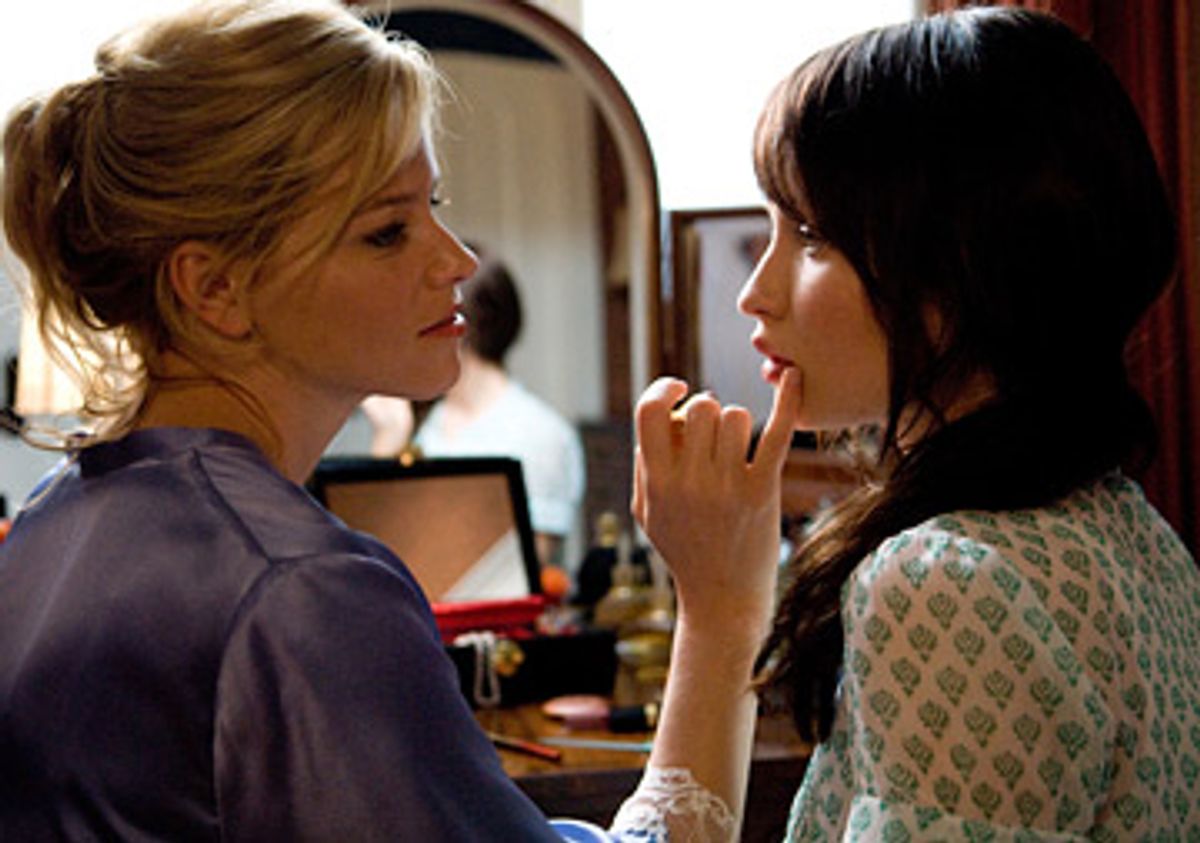 Even in her saner roles -- playing, for instance, a racehorse owner's wife in "Seabiscuit" or Laura Bush in "W." -- the actress Elizabeth Banks always has a vaguely demented gleam in her eye. So you'd think she was made for the role she plays in "The Uninvited": a possibly murderous almost-stepmom whose relationship with her two potential teenage daughters is contentious, to put it mildly. But it's a role no one could pull off well. Banks gets one or two close-ups in which we're allowed to bask in her appealing nuttiness. The rest of the time, she merely looks confused by the plot she's been plopped into.

"The Uninvited," a horror-thriller that's neither horrifying nor thrilling, is the debut feature by the Guard brothers, Charles and Thomas, an English duo whose previous credits include several shorts made with the actress Lena Headey. The picture is ostensibly a remake of South Korean filmmaker Ji-woon Kim's 2003 "A Tale of Two Sisters," an elegant, haunting picture that is, unfortunately, now out of print and a bit difficult to find (although I urge you to seek it out, if only so you can explain to me what the hell the stuff toward the end means -- "Sisters" is a creepy and poetic piece of work, if not a particularly coherent one). "The Uninvited" doesn't, of course, have the same creepy glow as its inspiration: Instead of making allusions, it offers up specifics. Lots of stuff jumps out at us in "The Uninvited." At one point we catch a glimpse of a spooky, unseen something in a dark corner, but in the context of the rest of the movie's obviousness, the eerie indirectness of that moment just seems like a mistake.

This is your standard, straight-up mainstream supernatural entertainment, although, to its credit, it's low on gore and sadism. What's more, its plot (the script is by Craig Rosenberg, Doug Miro and Carlo Bernard) pretty much makes sense, in a hallucinatory kind of way. Anna (Emily Browning, who played Violet in "Lemony Snicket's A Series of Unfortunate Events") is a sweet-faced teen who's just been sprung from the loony bin. A kindly psychiatrist there urges her to go out into the world, "kiss a boy, get into trouble." There's been some trauma in her past, involving the death of her mother, and it has made her home life a nightmare. Her father's new girlfriend, Rachel (Banks), alternates between menacing her and lavishing an unsettling degree of motherly attention on her. Her father (David Strathairn) stands by, looking like a beaten dog. Her only friend and confidante is her older sister, Alex (Arielle Kebbel), a leggy troublemaker who also sees that something's not quite right with stepmommy-wannabe Rachel.

Anna wakes in the middle of the night to find dark, slimy specters crawling around her bedroom floor. She keeps seeing a mysterious little redheaded girl with dead-looking eyes; garbage bags that are supposedly filled with garbage begin ... moving. Is she dreaming this stuff? Has the household been invaded by ghosties and beasties? Or could it be that she was sprung from the hospital a tad too early? Nothing in "The Uninvited" makes you care enough to want to find out. As is generally the case with Hollywood movies that use Asian horror films as their inspiration, the Guard brothers seem to have glanced at the original, borrowed a few images and then made the movie according to some preconceived template of what makes audiences jump -- instead of burrowing into the stuff that haunts our dreams. Banks, whose character is a nurse, gets a speech about having served her time wiping the bums of elderly patients. But that's about as close to scary as "The Uninvited" gets.