Moving the center to the left

Just as Republican congressmen moved President Bush to the right, so Washington's Democrats are now pushing Obama to the left. 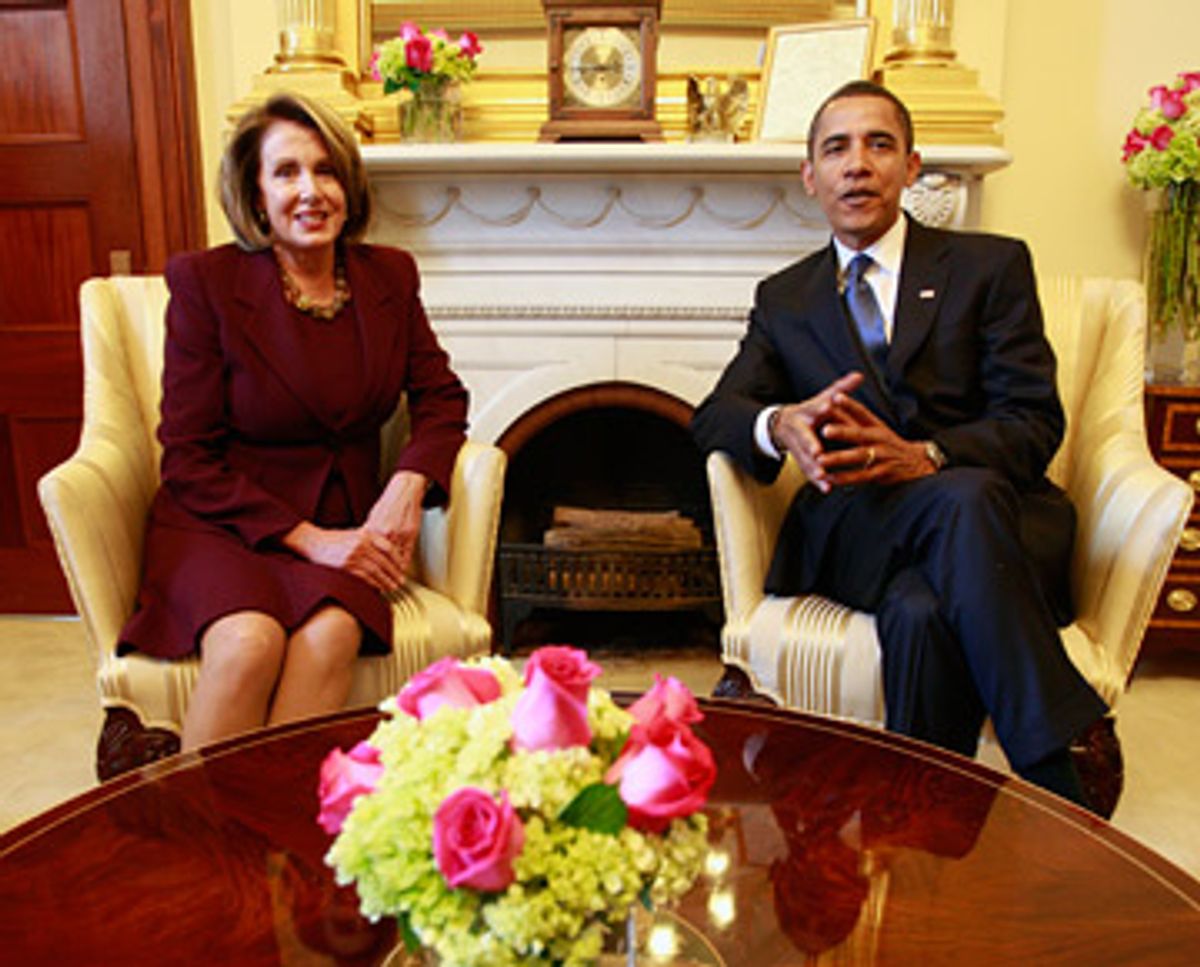 When they write their retrospectives about the era that ended with the 2008 election, economic historians will undoubtedly credit George W. Bush with almost single-handedly moving the country to embrace extremist conservatism. It’s a simple storyline: Cowboy president drives bewildered American herd over laissez-faire cliff. What such reductionism will ignore, though, is what we must remember now: namely, that Congress also played a decisive role in the stampede.

As former House Republican leader Tom DeLay said, he and his colleagues deliberately started “every policy initiative from as far to the political right” as possible, so as to shift “the center further to the right.” The formula emulated Franklin Roosevelt’s fabled admonishment to allies: “I agree with you, I want to do it, now make me do it.”

With Bush, congressional Republicans knew they had an ideological comrade in the White House. But they also knew he was confined by the (minimally) moderating desire for reelection and the (even more minimally) moderating limits of his national office. So, to reach their goals, conservatives had to compel their presidential friend to do what they wanted -- and compel him they did. When Bush’s tax cuts and deregulatory schemes hit the Capitol, Republicans inevitably expanded them to fully achieve the right’s objectives.

Of course, that triumph was the country’s loss, as Republican policies thrust the political center off a conservative precipice and America into an economic freefall. And as we plummet, we are desperately groping for a lifeline.

If we are lucky and we end up snagging one that saves us -- a huge if -- it will be one that is strong enough to snap the center back from the conservative brink. This super-durable bungee cord must have the force of law, meaning it will be woven by Democratic legislators now exerting as much pressure on President Obama's left as congressional Republicans focused on President Bush’s right.

When, for instance, Obama hedged on his promise to revoke $226 billion worth of Bush’s upper-income tax cuts, House Speaker Nancy Pelosi, pushed him to fulfill the pledge and put the money into programs that better guarantee job creation.

When Obama initially offered up a stimulus bill filled with discredited business tax breaks, Democratic senators forced him to back off. Reps. David Obey, D-Wis., and Jim Oberstar, D-Minn., then argued that the president’s proposed infrastructure investments were too small to boost the economy. That led House Democrats to increase Obama’s spending targets.

Then there was the progressive reaction to Obama’s demand for more financial bailout money. Turning a routine committee hearing into a modern-day incarnation of the Great Depression’s Pecora Commission, Rep. Alan Grayson, D-Fla., upbraided a Federal Reserve official for refusing to disclose which banks are receiving taxpayer dollars. The spectacle was one of many that whipped the House into passing a bill attaching strings to the funds. Obama responded by committing to enact some of the restrictions by fiat.

At once complementary and adversarial, this intragovernmental squabbling probably makes the conflict-averse Obama uncomfortable. But the “make him do it” dynamic could finally bring the center of Washington’s political debate closer to the progressive center of American public opinion. Even more important, it is precisely what will help the new president avert an economic disaster.