His rock-star status among world leaders, at a time when America's reputation is in tatters, shows the former president is a major asset to Barack Obama. 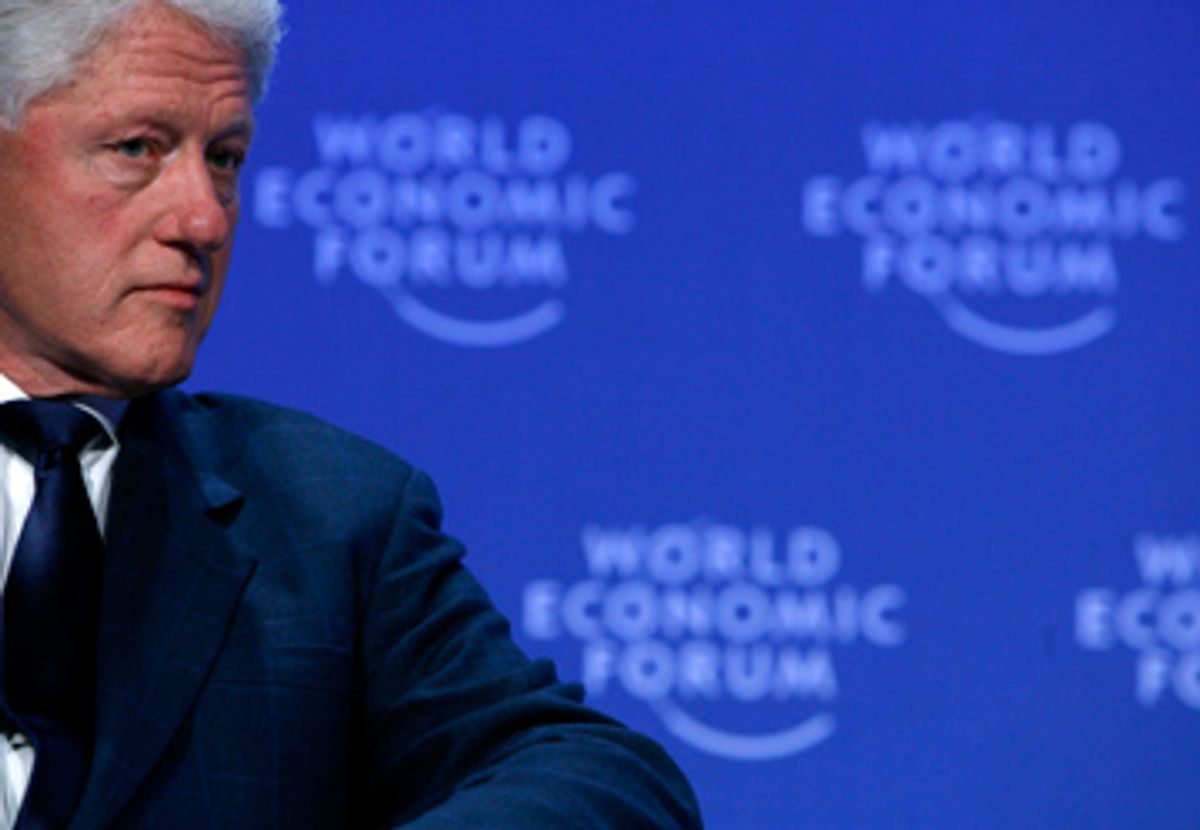 Given our current realities, it might be easy to dismiss the networking hive of corporate, media and philanthropic leaders who gather annually in Davos, Switzerland, for the World Economic Forum. Accustomed to flattering themselves and each other as benevolent masters of the globalizing world, they now confront an unprecedented crisis -- actually a conglomeration of crises -- that has diminished their financial worth and moral credibility.

What roused the global elitists from their glum torpor was the opportunity to lay blame for the economic catastrophe that has befallen the world. There was one obvious target: the United States of America, whose stupid and criminal bankers have inflicted so much harm on the whole of humanity. It is an undeniable fact that the Russian and Chinese leaders explored with great relish at every opportunity.

Into this hostile territory rode Bill Clinton, the lone American to whom anyone at Davos might actually listen as he attempted to uphold the name of his country. (Presumably too busy for international confabs as they try to organize their administration and save the country, the Obama White House sent nobody except presidential aide Valerie Jarrett, who didn't make much of an impression.)

Featured at a special plenary session with Klaus Schwab, WEF's slightly menacing supreme impresario, the former president didn't try to evade the responsibility attributed to the U.S. by speaker after speaker. Referring to sharp words from Chinese Prime Minister Wen Jiabao, he admitted: "The Chinese premier was right: It all started in the United States." But he then went on to insist that China must continue subsidizing the U.S. budget and trade deficits in order to preserve its own vital export industries. "Global interdependence is more important than anything else in the world today," he said. "We cannot escape each other. Divorce is not an option."

He spoke out forcefully in defense of the Obama administration's economic policies, notably including the economic stimulus package and the proposed "bad bank" to nationalize distressed mortgage assets. He lifted the spirits of the conference at least momentarily when he demanded that world leaders act in the great American tradition of Franklin D. Roosevelt, although he didn't mention FDR by name.

"This is not a time for denial or delay. Do something. Give people confidence by showing confidence," he urged. "Don't give up. Don't bet against yourself. Don't bet against your country. This is still a good time to be alive." If that was not sufficient to motivate the Davos audience, he later pointed out at a forum on the "philanthrocrisis" that the responsibilities of the fortunate had in no way been lessened by declining portfolios. "We're all still doing pretty well or we wouldn't be here," he declared. Now is the time, he said, to redouble efforts to provide better healthcare and more robust economic development in poor countries -- and to work together to forestall climate change.

Clinton did not stay long in Davos, arriving Wednesday afternoon and leaving Thursday evening. But when he wasn't delivering public pep talks, he was constantly busy in a stream of private meetings with foreign dignitaries. He remains a charismatic figure, where he is as likely to be mobbed for autographs and photos at a Swiss truck stop as at a cocktail fete of celebrities and investment bankers.

And in the first days of Hillary Clinton's tenure as secretary of state, he appears to be serving in a diplomatic capacity of some kind. On Wednesday evening, he stopped by the hotel where Vladimir Putin, the Russian prime minister, was hosting a rather desultory party, attended by functionaries and oligarchs (including the notorious aluminum tycoon Oleg Deripaska). What seemed at first to be a mere courtesy visit where he might shake hands, raise a toast and depart quickly turned into something else.

Putin greeted Clinton cordially as "our good friend" as they raised glasses of vodka and then listened to a few musical selections by a pianist and a violinist. But after the entertainment ended, the two former presidents moved to a table in a separate room, with their interpreter, behind a phalanx of Secret Service and Russian security agents. They talked intensely for nearly 90 minutes before rising and walking out together for a few pictures with partygoers.

Neither would comment on the substance of their discussion. But it was obvious that Clinton would not have participated in such a public encounter, witnessed by scores of people at the Putin party, unless the White House and the State Department had approved in advance. Perhaps encouraged by Putin's keynote address, in which he signaled a desire for better ties with the West, the Obama administration hopes to obtain greater Russian cooperation on issues such as the Iranian nuclear program.

For his part, Clinton will ignore the critics who denigrate him and continue to exercise his diplomatic skills on behalf of his country -- as he has done informally ever since he left the Oval Office. The warm reception in Davos suggested that he can help a new and popular president rebuild the prestige squandered so recklessly by his predecessor.