Limbaugh and Palin are in charge, and there's nothing Michael Steele or Mitch McConnell can do about it. 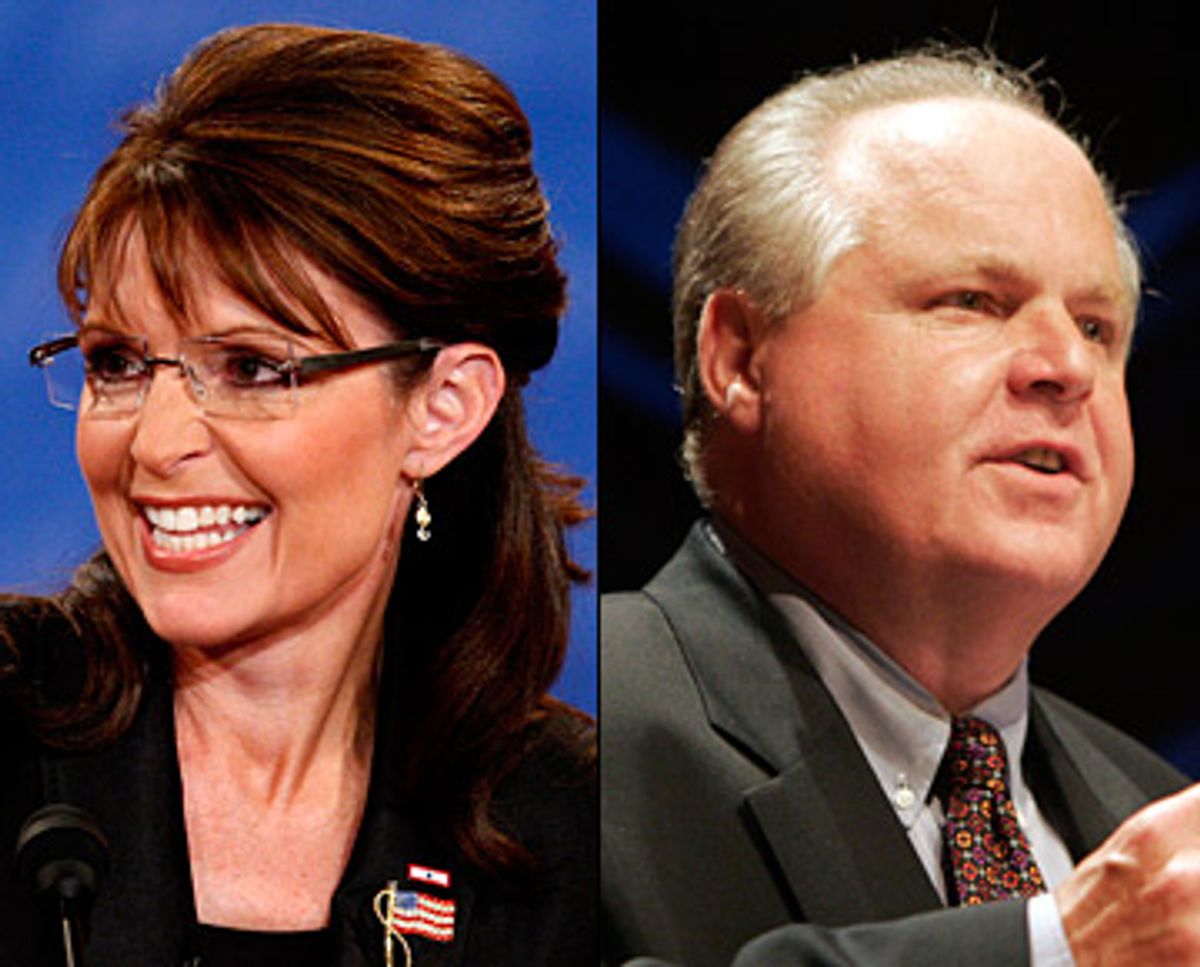 Sorry, Michael Steele, but it's going to be a while before you're anything more than the figurehead frontman of a shipwrecked Republican National Committee. Sarah Palin and Rush Limbaugh remain the leaders of your party, and most Republicans are happy that way. A Rasmussen poll out today found that fully 55 percent of Republicans polled think their party should be "more like" Palin.

The nominal topic Dick Armey and I were set to debate on "Hardball" last week, before our conversation went off the rails, was the Democrats' role in making Limbaugh and Palin the public faces of the party. But I thought the framing was off. Democrats have had almost nothing to do with the growing prominence of either GOP entertainer emerging from the Republican wilderness; Palin and Limbaugh are hogging the limelight themselves. Just in the last week we saw the launch of SarahPAC, Palin's new fundraising vehicle; we saw her pallin' around with elitists and stalking Barack Obama at the stuffy Alfalfa Dinner; and today she's composed an Op-Ed backing (surprise!) drilling in the Alaska National Wildlife Refuge. Meanwhile, Limbaugh had his own Op-Ed in the Wall Street Journal over the weekend, with a farcical approach to an "Obama-Limbaugh" stimulus proposal, and he's continuing to use his radio show to campaign against the Democrats' stimulus bill.

Despite his cliffhanger election to run the RNC, Steele couldn't compete for media attention with Palin or Limbaugh this week. And even when he gets the spotlight, he barely makes sense. On Monday Steele parroted dumb GOP anti-stimulus talking points, telling CNN's Wolf Blitzer that "not in the history of mankind has the government ever created a job," ignoring the millions of Americans currently employed in government jobs, not to mention the military. (I don't expect Steele to know anything about fabulous Depression-era successes like the Works Progress Administration and the Civilian Conservation Corps, but the existing government workforce seems like something Steele should be familiar with.)

The only thing sadder than the GOP's leadership deficit is its ideas deficit, and the two afflictions are related. Imagine if, as RNC head, Steele got together with other party mavericks (if they exist) to draft a stimulus package he thought might actually reach African-American and working-class voters, one that didn't rely merely on the voodoo of tax cuts but also included stimulus spending that would put unemployed and underemployed workers in new jobs. I'm not saying it would work, but it would be interesting to hear a pragmatic GOP alternative. Instead Steele's just another Republican talking head mouthing "tax cuts, tax cuts" like a zombie, while the economy continues to shed jobs and the nation heads for harder times. Similarly over the weekend, GOP Sen. Jim DeMint was absolutely stomped on ABC's "This Week," with not only Barney Frank but also with corporate chieftains blasting his assertion that only tax cuts can create jobs.

"We have to decide if we want to be a free market economy and let the money stay there or be a government-directed economy, which is where we're headed with this plan," DeMint argued. FedEx CEO Fred Smith countered: "No question about it, the infrastructure of the country has been underfunded for a long time ... it certainly would be a wise thing to invest in all kinds of infrastructure," while Google CEO Eric Scmidt came back with: "I'm worried that tax cuts alone won't work because people are not paying any taxes because they're not making any money."

Still, the stimulus fight is tougher than it should be for Democrats. Clearly the best ally the Republicans have is the economic illiteracy of the pundit class in America. I'm watching NBC's Chuck Todd say the Democrats have lost the "message war" over the stimulus, because it's now just seen as a "spending bill." There's no way for a stimulus bill not to be a spending bill; the point is that the economy is such a wreck the government becomes the spender of last resort. This had merely been a stupid GOP talking point until 10 minutes ago; now it's becoming a stupid media talking point. Funny how that works.

Meanwhile, this morning MSNBC's Joe Scarborough began railing about how the plan's rebates to working people who don't earn enough to pay income taxes (though they do pay sales, payroll and property taxes) amount to "socialism." Let's get this straight: It's socialism when government gives money to workers whose jobs don't pay enough to keep them out of poverty, but it's not socialism when the government bails out greedy, failed banks? I guess not, especially if the bailout forces don't impose limits on executive compensation or play a role in managing the bailed-out enterprises. That's actually called lemon socialism, as Paul Krugman notes, in which "taxpayers bear the cost if things go wrong, but stockholders and executives get the benefits if things go right." Obama knows better than that.

I think the Democrats are being hurt by a few political complications right now. It's not good that we're debating how to spend the second "tranche" of the awful TARP program at the same time as we're having the stimulus debate; I think the inequities and inefficiencies of TARP are smogging the atmosphere for the as-yet-unfinished stimulus bill. We all heard about a desperately needed $700 billion bailout bill a few months ago -- it rewarded bad behavior and, worst of all, it didn't work. So why should Americans be any more optimistic about the separate (and it's hard to keep straight that it is separate) stimulus bill Obama has championed?

I also think Obama and the Democrats need to break three or four categories of spending out of the bill, and crusade for them daily, in real-life, real-job, real-money terms. This mess is complicated, and I'm not suggesting that Obama demagogue or exaggerate, but what the plan will accomplish is getting lost in debate over tax cuts and tax credits, shovel-ready vs. forward-looking projects, and confusion over the stimulative role of direct grants to the states. There is so much confusion and ignorance at work here, only some of it willful.  Obama has an enormous educational and not merely political task in front of him this week, and he can't expect much help from most of the media.