How mixed martial arts went from a "blood-flecked freak show" to an international phenomenon that could permanently put boxing in a chokehold. 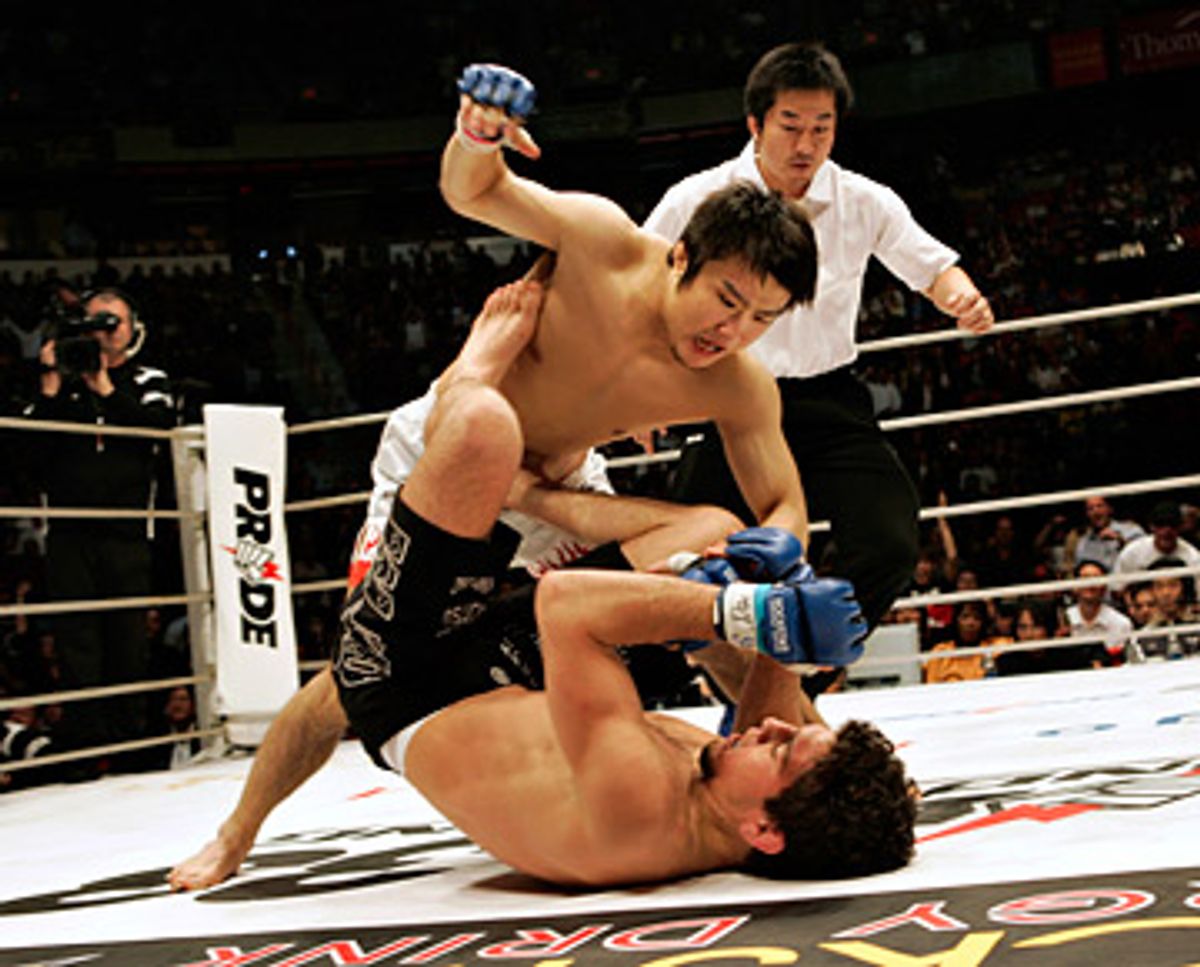 The first impression mixed martial arts made on America had all the charm of a drunk knocking over a casket at a wake. Described as "no-holds-barred fighting," MMA was presented in a 1993 pay-per-view telecast pitting practitioners of various martial arts against each other in an octagonal cage. It was exactly the kind of alligator vs. shark competition that gets young men hollering. "Bruce Lee would kick Ali's ass!" "The hell he would!" The premier Ultimate Fighting Championship event was directed at exactly that testosterone-addled, free-spending demographic, and it promised that victory would only come with "knockout, surrender, doctor’s intervention or death."

Except for biting and eye-gouging, everything was permitted at UFC I. The lowbrow allure was real -- I sure as hell watched, and got my car-crash satisfaction when a kickboxer punted a sumo wrestler’s teeth into the ringside seats (also embedding a few teeth in his own shin). Royce Gracie, a member of the family that had founded Brazilian jiu-jitsu, won the elimination-style competition. Gracie jiu-jitsu involves dragging an opponent to the ground and twisting his extremities into uncomfortable positions, or choking him unconscious. (In the early UFC competitions, the Gracies almost always won, often defeating much larger men.) Of greater importance to the promoters was the fact that the event grossed over $12 million  in pay-per-view buys.

It’s not every day that a new sport becomes a major cultural force, especially when it comes to martial arts; after all, people have been fighting for a long time. In America, MMA jumped into the void left by boxing, which had begun waning in popularity, and now threatens to topple the "sweet science of bruising" from its long reign as the preeminent combat sport.

The UFC version of mixed martial arts has only been around for 15 years, but its history is already being written. In "Blood in the Cage: Mixed Martial Arts, Pat Miletich, and the Furious Rise of the UFC," Sports Illustrated writer L. Jon Wertheim follows the evolution of MMA by way of Pat Miletich, an early champion. Wertheim pays full attention to the UFC’s gruesome inauguration and aftermath. The blood-flecked freak show lurched on through the '90s -- John Wayne Bobbitt even tried to get in on the act -- providing a Macy’s parade-size piñata for politicians to bash in their requisite displays of moral rectitude. John McCain, a devoted boxing fan, became the most conspicuous critic of MMA, declaring it to be "human cockfighting."

Lost in the spectacle was the fact that the sport was developing rapidly and leaving the grotesqueries of its earliest days behind. An increasing number of fighters, especially former wrestlers -- Olympic-style wrestlers, not the dudes in spandex -- were making MMA their profession. Although the political persecution almost drove MMA out of business, it managed to survive and then thrive through canny marketing, a successful reality TV show ("The Ultimate Fighter") and capital infusions from the Fertitta family (billionaire casino and amusement park owners). More subtly, the introduction of weight classes and rule changes made bouts more competitive and fighters no longer had to face multiple opponents on the same night. Head butts, fishhooking, groin strikes and hair-pulling were banned, as was "small-joint manipulation" -- that is, snapping fingers. The fighters also began to wear light gloves to protect the delicate bones of the hands. (Some MMA leagues banned elbow strikes to cut down on bleeding, as elbows break skin more easily than gloved fists.) The new standards also made the fights more fun to watch.

Pat Miletich gives "Blood in the Cage" a soul. People fight for all kinds of reasons -- they love contact, or they need money, or because they’re filled with rage. A miserable childhood threw Miletich face first into that last category. An Iowa native, Miletich and his family were first abused then abandoned by an alcoholic father. Two of Miletich’s brothers died violently and another spent an extended stint in prison for armed robbery. An indifferent student, Miletich was a gifted athlete and even more gifted street brawler. Martial arts saved him by directing his aggression into the discipline of the gym. However, it wasn’t until the UFC came along that he started getting paid to do what came naturally.

Wertheim’s early chapters are disfigured by the clichés and lad-speak that have become the degraded baseline for prose in men’s magazine. Themes are "kicked around" and novice competitors "beat a hasty retreat." Fighters have "testicles the size of cabbages" and, "In the Octagon, no one gives a shit about your satirical blog ..." Even a little of this goes much too far. Yet Wertheim is a capable journalist and when he turns to Miletich and the development of MMA, the narrative settles down. Although a relative newcomer to the sport, Wertheim knows the difference between a chokehold and a kimura and he deftly balances the business history of MMA with colorful characters like 280-pound Henry "Tank" Abbot, self-declared "master of the ancient martial art of kicking ass" and possessed of a lengthy criminal record for assault and battery. Most important, Wertheim gives insight into the spirit of men who subject themselves to intense pain and suffering to become successful fighters.

Wertheim’s analysis of the rise of MMA is extensive, if often superficial. He credits the fact that "violence sells," and that MMA meshes with YouTube and video game culture ("the actual fighting ... often assumes the feeling of a video game, with its spasms of action and multiple ways of winning and losing"). In MMA, Wertheim writes, the stars remain approachable by fans and are less pampered than the icons of mainstream sports. For Wertheim, real men have long been under attack by a "feminized" culture that wants to put bubble wrap and knee pads on everything. He also links the popularity of MMA to an uptick in American machismo post-9/11. I have mixed feelings about Wertheim’s sociology. After all, it's only upper-middle-class kids whose mommies keep them out of the mud, and if there is a "war against the boys," the boys seem to be holding their own with SpikeTV and "Girls Gone Wild" videos.

Any discussion of MMA's rise has to also include one of boxing's fall (in the U.S. if not in Britain and Latin America). At this point, it’s difficult to understand just how important boxing was in this country through the 1960s -- on par with baseball and far overshadowing upstarts like basketball and football. Wertheim makes the excellent point that MMA, for all the blood spilled in the octagon, is less dangerous long-term than boxing (pace Sen. McCain). This is because MMA fighters, who get hit in the head less than boxers, suffer less brain damage (though how much less will only be known as this generation of fighters ages).

"Blood in the Cage" is less convincing when Wertheim insists that boxing has fewer exciting fights than MMA. While it’s true that the UFC holds its fighters under tight contractual restraints and can force them to compete whenever it wants, the sport seems just as reliant on the star system as boxing. For all the greed of boxing promoters, there’s been no shortage of riveting matches in the past decade.

Wertheim claims that "boxing is still populated largely by reformed thugs" and/or people of color who don’t necessarily resonate with a mainstream audience, while MMA fighters tend to be college-educated and better behaved. Wertheim fails to explain why people don't mind watching thugs of the unreformed variety run amok in, say, the NFL, since Plaxico Burress’ nightclub adventures didn’t have anyone tuning out the Super Bowl. While boxing’s fall does involve race and class, the story is more complex than Wertheim is ready to admit. Quintessentially urban, boxing thrived during the Depression, both because there were a lot of desperate young men and because the culture celebrated working-class heroes. (Boxing drew its top fighters from the tidal wave of immigration in the first part of the century. It’s always the guy just off the boat who has the most to prove.) After the Second World War, the city played a smaller role in the American story. The cultural focus turned to the suburbs and boxing was left behind. Suburban folk wanted their kids to be doctors, lawyers and businessmen, not fighters.

The suburban white-picket fence turned out to be hiding the same poverty, dysfunction and drugs as the cities, and all the old impulses still drove young men to fight. Yet it was impossible to go back to boxing -- the infrastructure of boxing gyms and school boxing programs had never been created in the suburbs. To succeed as a professional boxer, you have to start by age 12 or so, preferably earlier. By the time some angry teenager in the exurbs wanted to learn how to use his fists, it was already too late, even if he’d had somewhere to go.

What the suburbs do have in abundance are wrestling teams and the martial arts schools that became a suburban staple in the chop-socky craze of the 1970s. (No strip mall is complete without a karate, akido or jujitsu dojo.) Former high school wrestlers found that they had been given a good foundation for a successful MMA career. Even now, a talented athlete with a background in martial arts or wrestling can pick up enough skills in a year or two to compete in MMA -- something impossible to achieve in boxing. MMA gave white people a way to fight again. In the octagon, fans see men who they can imagine aren’t really all that different from them. As the sport becomes ever more professionalized, we’ll see if middle-class men will continue to be able to compete against those for whom fighting provides the only way out.

I don’t find MMA as visually compelling as boxing; unless you have a technical understanding of Brazilian jiu-jitsu, it often looks like two sweaty guys rolling around on the ground. (As a longtime prizefight fan and former amateur boxer, I have to admit a bias.) But the fact that MMA fighters generally aren’t very good at avoiding punches does lead to spectacular knockouts. There are plenty of boring boxing matches too, and I think that over time, MMA will continue to tweak the rules to make the sport easier on the eyes. Even without such changes, it could be that MMA has already permanently eclipsed boxing. Recently Oscar de la Hoya, the most recognizable boxer in the world after Muhammad Ali, was promoting two cards on the same night -- one a boxing title fight in Los Angeles, the other an MMA event in Anaheim, Calif. Which one did de la Hoya attend? Oscar went to Anaheim.

Two men pitted against one another in the squared circle -- or in the octagon -- provides the purest expression of struggle and competition. When the bell rings, all pretense falls away and we push up against the limits of brutality, endurance and courage. (Not for nothing did A.J. Liebling label boxing a "Jansenist sport.") For those who need to fight, or who need to watch fighting, MMA provides an outlet with a smaller cost in human suffering than boxing.

MMA has yet to find its great scribe, its Liebling, Pierce Egan or Norman Mailer, but it is young. Until that new bard of bloodshed comes along, "Blood in the Cage" will stand as a worthy introduction to the birth of something both awful and beautiful.

Robert Anasi is the author of "The Gloves: A Boxing Chronicle." His new book, "Golden Man: The Remarkable Quest of Gene Savoy," will be published soon, he hopes. pes.