How Obama must sell his recovery plan

Democrats have to get off defense and explain how their funding priorities will create jobs and build a stronger, more inclusive economy. 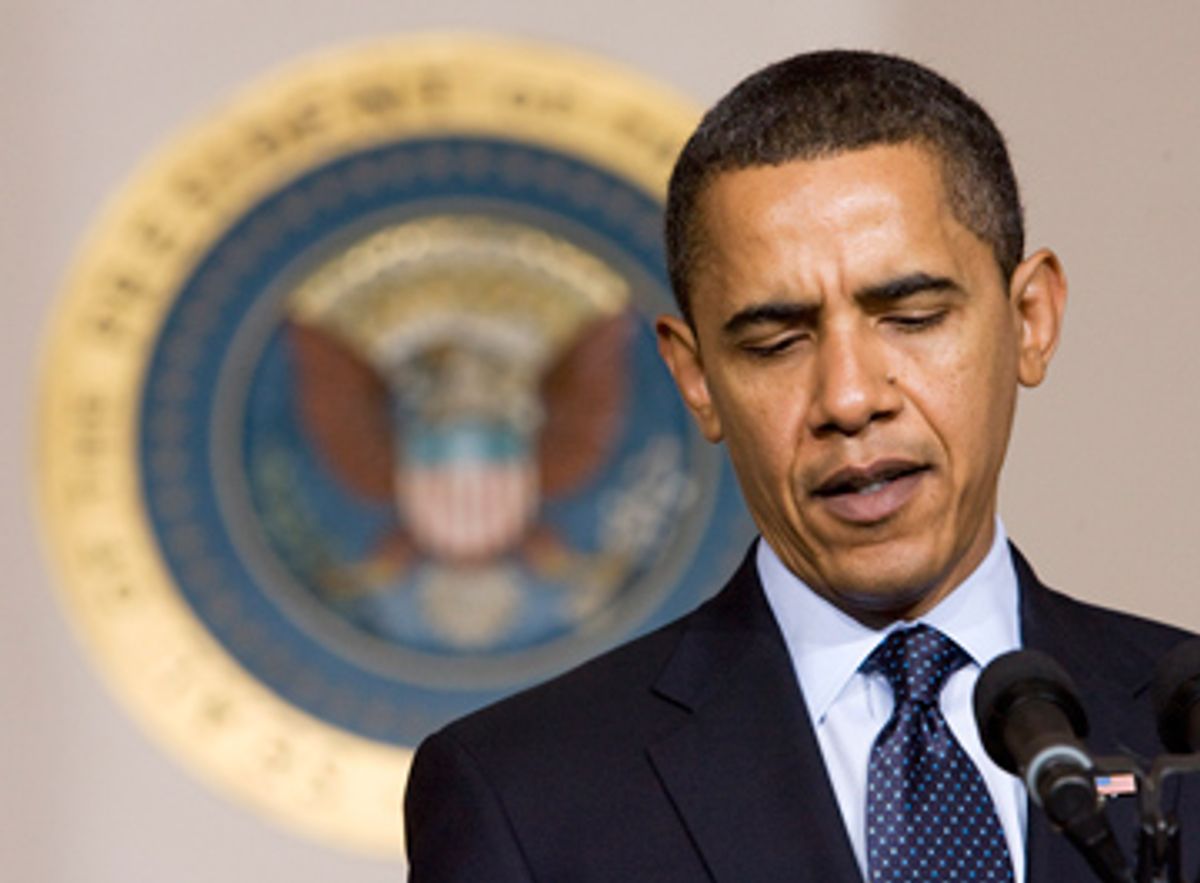 Millions of Americans are suffering thanks to an economic crisis that shows no signs of letting up soon. Congressional stimulus proposals likely hold the key to our economic revival. Yet the debate over the bill is dominated by allegations about alleged pork and wasteful spending. At a time of national crisis and on the heels of a formidable electoral victory, why are President Obama and his congressional allies playing defense on the recovery?

Obama must find a more compelling way to tell America that we need far more than just a short-term stimulus plan. This bill -- with some relatively small adjustments -- offers hopeful signs that the nation is ready to transform and move quickly to do so.

Sure, the bill is flawed, but it also does much right. Foremost, it offers solid and immediate help for low-income people - - those hit "first and worst" -- with boosts in unemployment insurance, food stamps and refundable tax credits. Many Republicans are questioning why such social support expansions are in the bill, but it is clear that it is both humane and economically savvy. The inability and unwillingness of millions of Americans to spend is forcing us further down a grave economic spiral. The poorest Americans -- those who are targets of this social spending -- have no choice but to spend what they have. That is why this kind of spending is, in fact, perhaps the most stimulative portion of the bill -- the gross-domestic-product turnover per dollar spent for these kinds of social spending is far, far higher than any corporate tax break.

The bill also provides some tentative first steps toward a down payment on many pressing infrastructure demands -- a kind of economic backfilling. In the wake of Hurricane Katrina and the Minneapolis bridge collapse, we have seen what happens when we refuse to dedicate the necessary dollars and manpower to fixing our infrastructure. But not all infrastructure projects are equal. Retrofitting schools and homes, building new energy grids and expanding public transit access all work to make a more green and broadly prosperous America.

So, the broad outlines of the bill are encouraging. But there remain significant concerns about whether this bill will help those who need it most and usher in a new era of shared prosperity in America.

For instance, the bill calls for massive investments in suburban highways, but comparatively little for the public transit that is the economic lifeblood of millions of low-income Americans -- and which, if funded well, could be the salvation of millions more.

Job training programs also do not receive nearly enough funding. At PolicyLink, we call for at least 1 or 2 percent of all infrastructure funding to go toward training the next generation workforce.

And outside-the-box projects like grants and loans for new supermarkets in poor communities (to help inner-city residents eat better and improve their health) or more targeted broadband expansion (to encourage competitiveness and entrepreneurship in low-income communities) haven't the attention they deserve, either.

The bill started off from a very exciting place -- a recognition that we need a massive infrastructure investment and it could be used as stimulus. But the infrastructure choices, so far, have not met this singular moment. And Republicans have been successful at the cable news game of highlighting seemingly wasteful spending, forcing supporters of the stimulus continue to play defense.

Still, we support the general outlines of this bill. We, of course, hope President Obama and Congress will improve it. But the president must not shy away from talking about what this bill truly is. It is not simply a stimulus package. It is a stimulus and recovery package. It is the first step toward settling the roiling economy and beginning a dramatic, overdue and equitable transformation of the American economy. The nation can afford nothing less -- now or for future generations.