The random beauty of "25 Random Things"

Why the latest annoying Facebook trend might be one of the most inspiring Web crazes in years. 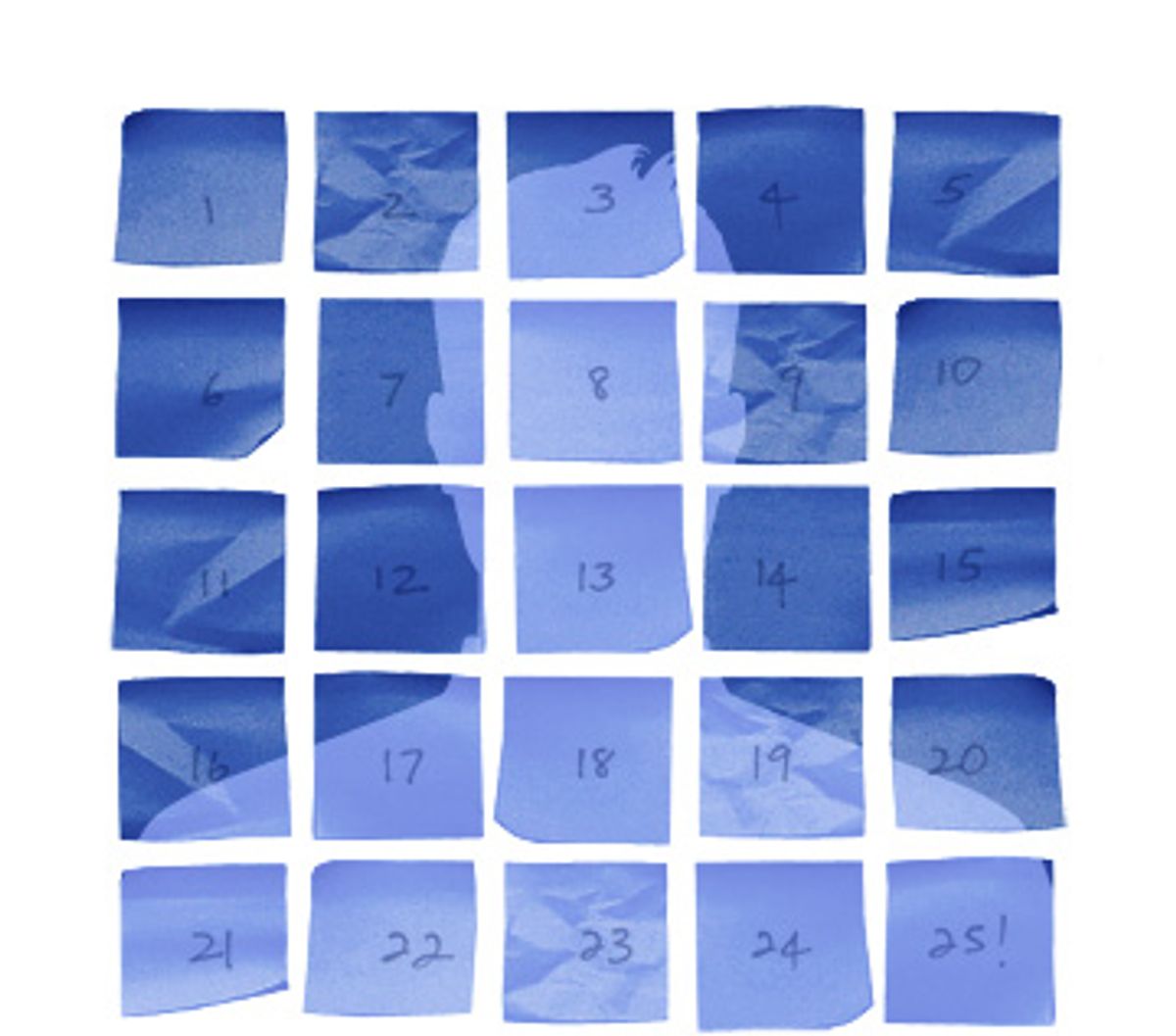 I was in the middle of typing up my "25 Random Things About Me" list on Facebook when a funny thing happened. I hit clear and decided to abandon the whole time-wasting endeavor. I'd made it through what I intended to be my sole entry before coming to my senses:

1. I like certain books and films and things that taste good. Also, kittens. Thanks for including me in this important social experiment. Now, please stop tagging me.

Over the past two weeks, I'd found my steady purr of status updates on Facebook interrupted by the ever-growing, viral cacophony of the "25 Random Things About Me" chain letter. In case you haven't been "tagged" yet (fear not, you will be) the concept is simple. Generate a list of 25 "things, facts, habits or goals" about yourself in the notes section of your profile and hit submit. Then, annoy 25 of your Facebook friends by encouraging them to do the same. "If I tagged you," the instructions explain, "it's because I want to know more about you."

The first time I encountered the new trend was about 10 days ago. An e-mail alert arrived in my in box informing me that I'd been tagged. I went about my day and assumed it was just another irritating Internet trend, like Julia Allison or that bitten by a zombie widget. It would run its narcissistic course, I reasoned, and then go away. But in the days that followed, I found myself bombarded with a tirade of mundane details about the friends I'd accumulated on Facebook. You've doubtless seen a few yourself -- and if you haven't, tens of thousands of people have begun reblogging them on their personal Web sites for your viewing pleasure.

Michel's No. 2, for instance, informs us that he was born with flat feet: "When I go swimming and walk around the pool, my feet make sounds as if they were suction cups." Jenny is "neutral to mildly negative about nutmeg." Tammy has "treated a goat's cantelope sized scrotum" and apparently has some difficulty spelling.

My Facebook wall was filling up with similarly compelling tidbits, which, of course, left me with one all-encompassing question: Do I really need to know that John "loves elk meat"?

What was happening? Facebook is supposed to be a safe haven for drunk teenagers who want to post pictures of themselves vomiting. An inclusive club where Obama staffers can freely grope cardboard cutouts of Hillary. A digital playground for stalking ex-girlfriends. These simple pleasures were being undermined by this solipsistic intruder, "25 Random Things About Me."

Clearly, I wasn't the only person who was frustrated. Just days into the fad, a growing number of Facebook groups protesting "25 Random Things About Me" had already begun to spring up. Thus far, I've spotted close to a dozen including:

Screw you, I'm not gonna tell you 25 Random things about myself

Stop Tagging Me in 25 Random Things Posts You Tards

Oddly, even the people who were submitting their own "25 Random Things About Me" lists seemed confused by their own participation. In addition to an inordinate number of posts about bacon, nearly every list I encountered included a disclaimer. Amber writes, "I have been tagged multiple times and resisted doing this meme." My friend Pete asserts at the top of his list, "I never respond to these types of things" -- which was my sentiment exactly, when I began to type up my snarky, one-item response to the trend.

That's when I noticed a new Facebook update on my wall. It was another list, submitted by a woman I'd worked with at a handful of different jobs. I'd known her for years, but somehow never really gotten to know much about her personally. I read her list, and "25 Things About Me" fatigue be damned, I was intrigued. Somehow moved. No. 18 even managed to break my heart. I immediately deleted my own cynical entry with a click of the mouse. This is what she'd written:

2. My mom was and still is a very famous actress in Romania. Her movies and plays are featured on TV all the time. When I was a kid I would beg her to bring me the flowers she received from the audience. She typically gave them to the ladies behind the scenes. I wish she would write a book about her life.

14. As a 6 year old in Bucuresti, I was a passenger in a car that was chased by the police. My dad was in the backseat with me. He covered my ears so the siren would not freak me out. The driver, my dad's friend, ran a red light and since he was somewhat drunk he decided to speed off. We got away just fine. The guy changed his license plate later on that night. My mom was very angry after we arrived home and she found out what had happened.

18. I still miss my dad tremendously, whenever I think of him. He died on Sept. 13, 1999 at home in Florida. He held my moms' hand and my hand in his as he died. I heard his last breath and it was a gentle, beautiful death - nothing like what I expected it to be from TV and the movies. He glowed for a long time after he died. He was a beautiful and wonderful man and I was his little girl.

Over the next couple of days, I began paying closer attention. I discovered that dozens of my friends had actually been posting things that were quite meaningful, witty, smart and sometimes poetic.

My friend Matt tended toward the cerebral:

8. While I've known some extraordinary women and men of faith in my lifetime, and goodness knows many favorite authors and musicians were believers, I strongly suspect that religion has long outlasted its usefulness to the species. I, without hesitation, call myself an atheist not so much to claim that I understand a thing about the whys and wherefores of the infinite universe in which we live, but to declare emphatically that no single religion on Earth does either.

Bret made me laugh with his hilarious randomness:

6. I own the URL fuckrock.com, but feel like I haven't fully realized its potential.

And my sister reminded me how important she is to me:

2. My parents have not spoken to me in over two years because I am gay.

9. I am extremely proud of my brother, Robbie and my sister-in-law, Amy.

And sure, there were the utterly ridiculous lists that wasted my time as well, and dozens that simply made me laugh. But even the most mundane entries tended to contain a few gems, minimalist narratives I could attach to the blur of faces I'd accumulated in this often paradoxically antisocial networking world we call Facebook.

That's the thing about "25 Random Things About Me": Once you stop being annoyed you realize that, at its best, it's one of the more compelling -- and, yes, even oddly inspiring -- wastes of time to hit the Web in years. And let's cut to the chase. Should we really be complaining about the inanity of this new trend? We're a nation entertained by lolcats.

So, accuse me of oversharing. Say I'm adding to the problem. But I've decided to stop sneering at those who've taken the time to share something about their lives. In fact, I've decided to post a list of my own. I didn't join Facebook, after all, to be anonymous, incurious or left alone.

Robert Lanham's writing has appeared in The New York Times, The Washington Post, Maxim, The Huffington Post, Radar, Nylon, Playboy and Time Out New York, among others. He is the author of the satirical anthropological studies "The Hipster Handbook," "Food Court Druids," and "The Sinner's Guide to the Evangelical Right." Lanham is the founder and editor of the trendsetting publication FREEwilliamsburg.com.