The president puts congressional pandering to the GOP in his rearview as he thrills a crowd in a Republican stronghold. 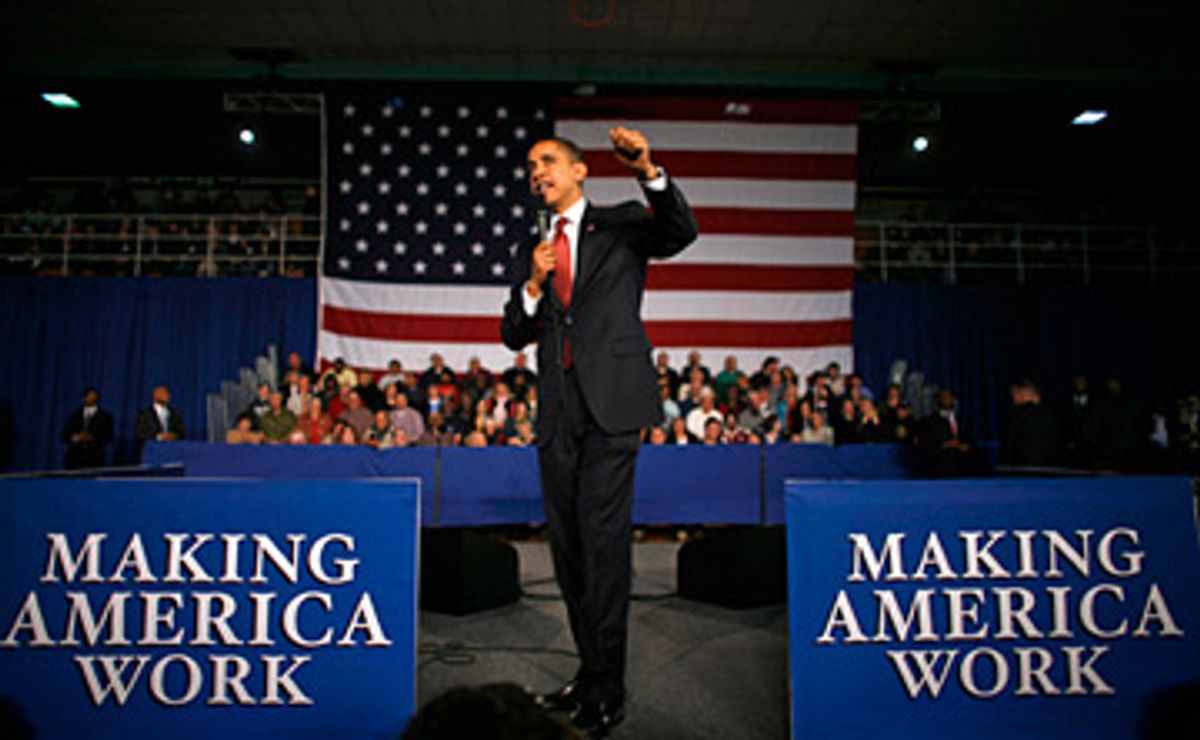 President Obama returned to the campaign trail Monday morning, a tad belatedly in my opinion, to sell his recovery and reinvestment plan. He went to Elkhart, Ind., which didn't actually vote for him in November. This was smart bipartisanship, not the silly kind we've been seeing in Congress, where Democrats put ineffectual Republican ideas in the stimulus bill, and cut good ideas, but still get few or no GOP votes.

But the Elkhart region has the nation's fastest-growing unemployment rate -- it's 15.3 percent, up from 4.7 percent only a year ago, and it's been hit hard by RV-industry layoffs. The president didn't screen his crowd or his questions, unlike his timid White House predecessor, but the rollicking hour-plus town hall felt like an Obama rally anyway. He laid out his spending priorities -- getting money in the hands of people who'll spend it, creating and saving jobs, and in the meantime, putting people to work doing things the country needs, not makework. And the crowd loved it.

Although he was speaking in a city that went for John McCain, Obama didn't pander to congressional Republicans at all. In fact he tweaked them by repeating a line that reportedly hurts their feelings: "We can no longer ... resort to the same failed ideas that got us into this mess in the first place. That was what the election was all about -- that the American people rejected those ideas because they didn't work. You didn’t send us to Washington because you were hoping for more of the same. You sent us there with a mandate for change, and the expectation that we would act quickly and boldly to carry it out -- and that is exactly what I intend to do as president of the United States." Obama warned that without bold action, "millions more jobs will be lost ... and our nation will sink into a crisis that, at some point, we may be unable to reverse."

To his credit, the president pitched his recovery and reinvestment plan as built around a "simple" core idea: "to put Americans back to work doing the work America needs done." The plan would save or create 3 million jobs, he said, "but not just any jobs -- jobs that meet the needs we’ve neglected for far too long and lay the groundwork for long-term economic growth." Obama also laid out the underlying basis for putting money in low-income, working-class Americans' hands, via targeted tax cuts, credits and rebates and expanded unemployment spending: "If you don’t have money, you can’t spend it. And if you don’t spend it, our economy will continue to decline."

Then he showed exactly how it would help Indiana: by extending unemployment insurance and other support for 550,000 Indiana workers, a partially refundable $2,500-per-student tax credit "to help 76,000 Hoosier families send their kids to college," and $1,000 tax cuts for Indiana families (he didn't have a number for that; he needs to get one before he gets to Florida). He promised his plan would create or save 80,000 jobs in Indiana, and that infrastructure funding would improve "roads like US 31 here in Indiana that Hoosiers count on ... and I know that a new overpass downtown would make a big difference for businesses and families right here in Elkhart."

I was also happy to hear Obama strike a populist tone, to answer a question from a "foreclosure intervention counselor," promising that he'd work to prevent foreclosures by making it easier for judges to modify mortgages in bankruptcy. "If you have a second, third, fourth or fifth home," Obama started, to increasing laughter and then a few hisses there in Elkhart, where few have second, let alone fifth homes, "and you go bankrupt, then the judge can modify the terms of your mortgage on your second, third, fourth or fifth home. But, if you are like most people, including me, and you got one house (the house I'm in in D.C., I'm just borrowing that, it's the people's house) ... you can't modify that mortgage if you're in bankruptcy."

What Obama didn't do: He didn't specify which version of the recovery bill he preferred. He was mostly silent about the dysfunctional Washington debate, except to say, "Now I’m not going to tell you that this bill is perfect. It's coming out of Washington, it's going through Congress (laughs). But it is the right size, the right scope, and has the right priorities to create jobs that will jump-start our economy and transform it for the 21st century." Maybe that's smart politics; he's trying to reach the American people, not pick a fight with any faction in Congress. He did give some signals about what he'd like to see in the bill by praising education construction and operations funding and home weatherization programs, which were reduced or eliminated by either the Senate bill or the Ben Nelson-Susan Collins compromise. I hope he's fighting hard for those priorities behind the scenes.

Obama also didn't zero in as quickly as he should have on how the bill would help Elkhart during the question-and-answer session. While I thought he was unbelievably effective answering these unfiltered questions -- especially the one from the Republican who wanted him to have a beer with Sean Hannity -- I thought he stumbled on the very first one, from a woman who wanted to know whether and how money would be spent directly in Elkhart. Obama rambled about his Recovery.gov site, which will let people see how it's being spent, and about working with the state to find worthy programs, but he didn't nail the question.

This is where he needs to get even more concrete, and I think over the next week he can. Wherever he goes, he should start with the estimated number of people in each city and state he visits who'll get his tax cut or rebate. Then he should talk about working with school officials to decide on local school funding priorities, with the local mayor on city needs, then the governor on bigger state and local projects.

To prove Obama didn't quite get the first question right, the very next person asked Obama how much of the bill would go into taxpayers' mailboxes directly. He didn't seem like a Republican, either: He told Obama to "support the people who got you into the office -- we the people, not the fat cats." That time, Obama got the answer right, and said he wouldn't be giving any more tax cuts to the rich, because they don't spend the money. But taken together, those first two questions in Elkhart showed there's an enormous concern, even among Democrats, that the stimulus get money out directly to the people and places that need it.

As I was waiting to watch the Elkhart rally early Monday morning, I saw shots of people who slept outside Sunday night to make sure they got in to see Obama. But it turned out the cable news shots weren't in Elkhart, but in Fort Myers, Fla., where he's headed tomorrow (and where an excellent New York Times piece on Sunday showed the extent of the devastation and suffering). Folks in Fort Myers started lining up Sunday night for a Tuesday speech.

Obama was right, if late, taking his pitch to the voters. (GOP Gov. Charlie Crist will be by his side in Fort Myers, a nice way to flip off John McCain, who's back to his cranky claims of "socialism!" about "that one." This will be a decisive week in the battle over the economy, and over the future of the country. Let's hope Obama hits the same feisty notes in his prime-time press conference tonight.