The Internet is made of kittens

How the lowly cat, shunned by Hollywood, became an online star: An introduction to Pet Week. 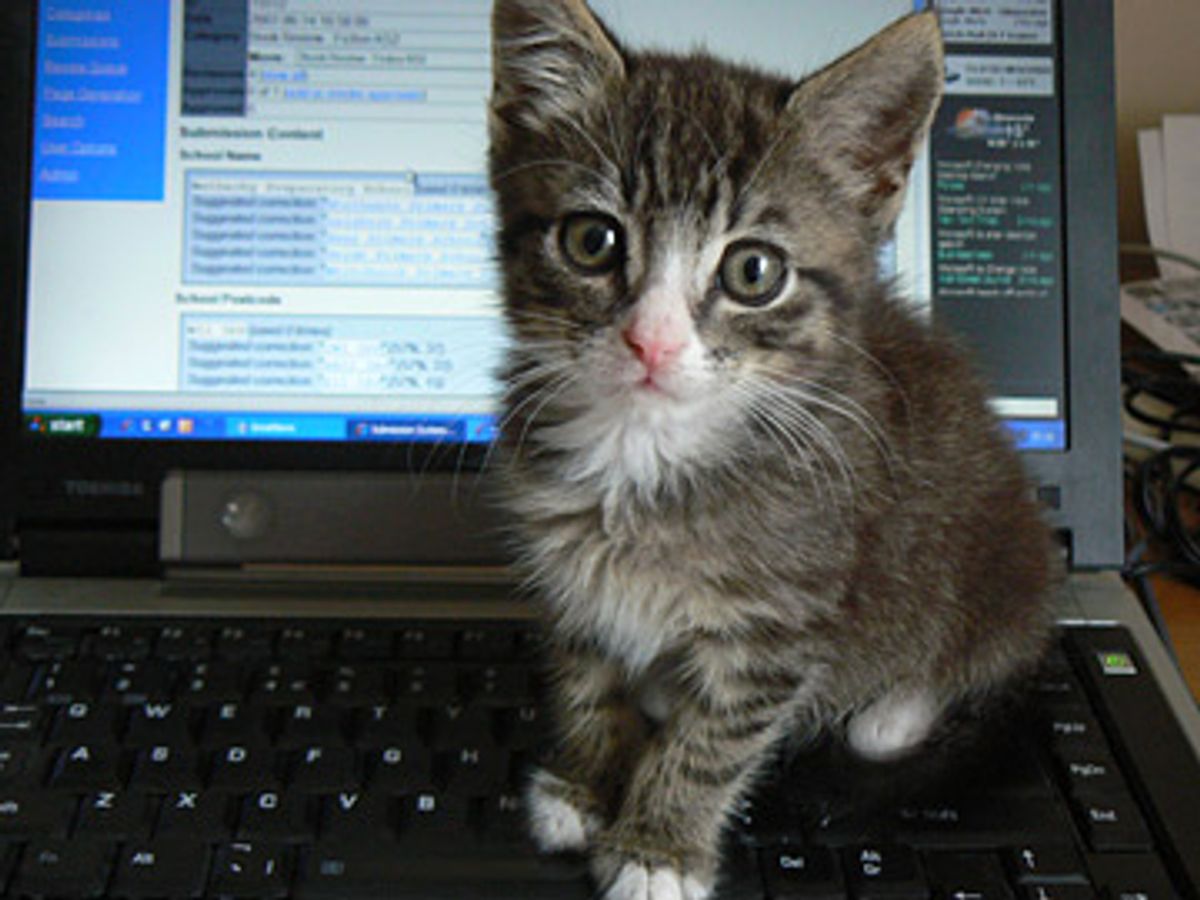 For all the "Marley & Me's" and "Beverly Hills Chihuahuas," for all the Lassies and Benjis, there are almost no movies about cats. Untrainable, skittish and unpredictable beasts that they are, cats are a bust in Hollywood. (The one exception? Morris the cat, whose trademark skill was licking his lips.)

But it's those skittish, unpredictable qualities that made them screwball comics for a YouTube age. The box-surfing cat, the kitty on a Roomba, the cat eating gyoza -- the Internet pumps out new adorable cat videos every day, many of them comic gems that rack up millions of viewers, their sheer simplicity and nuclear cuteness enough to make serious filmmakers soil themselves with envy and futility. (Have I seen "Che"? I have not. Have I seen "Cat with a bag on its head?" Uh, yeah: Like 10 times.)

Cats are the most popular household pets, but it took the ubiquity of video cameras (and help from the Japanese, who have never been shy about their feline fetish) to turn them into bona fide stars. Cats are creeping villains aquiver with menace. Cats are bungling Keystone Coppers whose best plans are always foiled. Cats are dicks. Cats are nauseatingly, almost criminally cute.

"The internet is the best thing that ever happened to cats," said one commenter at the video-sharing site Videosift, following a clip in which one kitten faces off against a litter of puppies in a "Matrix"-type satire.

For what it's worth, I didn't mean to be a cat person. I grew up with a healthy, sneering disdain for the painfully middlebrow antics of "America's Funniest Home Videos," for the "Hang in there!" posters of kittens clinging precociously to a tree limb. But there was this orange tabby, and blah blah blah, and suddenly my clothes are covered in stubborn fur. Thing is, to be a cat person is something of a private affair. We don't meet at the park and throw sticks. We don't parade our animals down the block or stand around, chatting awkwardly while our pets sniff each others' rear ends. Whatever your cat does -- the way he curls up like a croissant and snores, the way he pads frantically about the bed at 4:30 a.m., paw to your face -- is largely between you and the torn furniture. Which is another reason I think cat culture erupted online, the same reason people get pets in the first place: It's nice to know you're not alone. Other people's cats do this stuff, too.

There's also probably a heavy Venn overlap between cat people and Internet pioneers. Cats' biggest online boost -- the anthropomorphized lolcats that launched their own "catois" -- began on a message board for geeks and obsessives called 4chan, the same warped and merry pranksters who brought us the RickRoll. Posting cat pictures has long been a bloggers in-joke -- Friday catblogging, Caturdays! -- where exhausting 10-hour cycles of generating new copy screamed out for some kind of silly, mindless relief by the end of the week. "What's funny in this cramped, airless apartment? Ah, yes: The cat."

And, it turns out, cats are a brilliant blank slate. "Cats are easier to objectify -- ask the ancient Egyptians!" says Jason Kottke, who runs the influential site kottke.org. Cats, therefore, "are easier to make fun of, especially if they act in ways that run counter to cat-like tendencies, which they do in so many popular cat memes." And so we have Cats Who look like Hitler. We have Pirate Cats.  We have Kittens I Have Killed (not to be confused with Pets Who Want to Kill Themselves). There is just plain weirdness like Stuff on My Cat and Wii Kitty and Purrcast, an audio file that is exactly what it sounds like. There is a whole Pacific Ocean of content -- from the gold standard Cute Overload to more recent additions like the new live-stream Kitty Cam -- devoted to the no-duh reality that cats and kittens are, well, crushingly adorable. In fact, I would submit that cats and kittens might outnumber porn at this point.

Pandas are nice. But do they make a nom-nom noise when they drink? I don't think so.

As we approach Valentine's Day, Salon decided to take a look at one of the most binding and blinding of all romances -- the one we have with our pets. Ours is a culture obsessed with animals, in all sorts of endearing and intense and occasionally disturbing ways. And so this week we'll be examining the crazy love of the human-animal bond from a variety of perspectives, from the biological underpinnings fueling our behavior to the devastation of losing an animal to the ways the recession is affecting our pets. Today, closeted but rabid canine lover Heather Havrilesky ponders what it means to be a dog person. As for what it means to be a cat person, all I can say is that it helps to have a fast Internet connection -- and a lint brush.