Praise be to dog

An ode to loud, stinky, filthy canines and the pathologically needy people who love them. 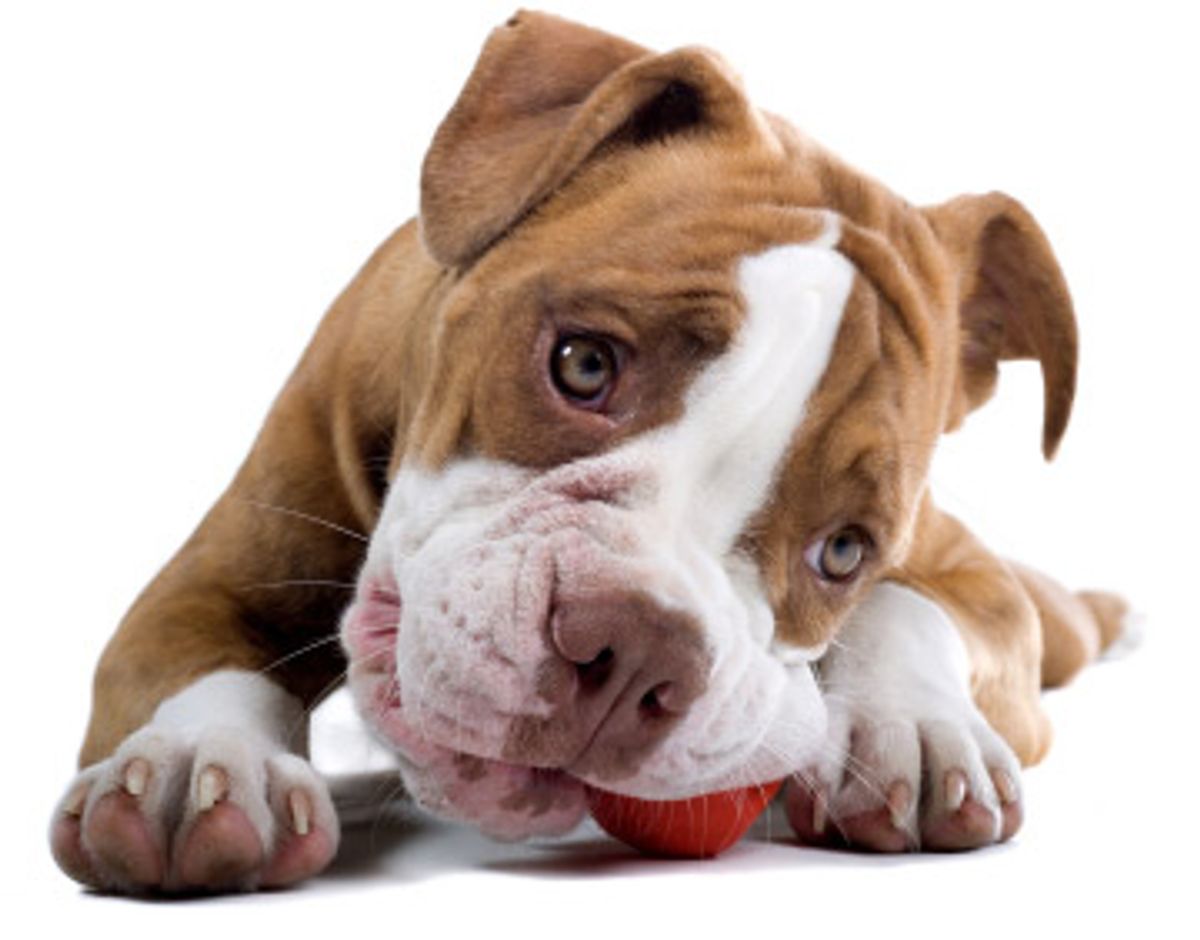 Dogs, babies, great books, margaritas, long naps, enormous oatmeal cookies: Some things in this life are so indisputably lovable that there's really no reason to discuss why we love them. Maybe that's why the notion of chatting about dogs with other dog owners or joining a book group or a mommy group always strikes me as redundant, unless I can talk books with the dog people, or join a mommy group that drinks margaritas then takes long naps, or find a book group that serves enormous oatmeal cookies that no one can shut up about.

I find self-proclaimed "dog lovers" particularly worrisome, even though I clearly belong among them. I teach my two big dogs stupid tricks, I walk them every day, I stare into their brown eyes and ask them how they're doing, I go into debt to pay for deluxe boarding that amounts to Doggie Disneyland. As I rile them up and wrestle with them on the floor and call them stupid names like "crocadonkey" and "princesshund" each night, my 2-year-old daughter looks on like a disapproving headmistress. "You playing?" she asks, but the look in her eyes says, "Why does my mother demean herself with those foul canines?"

And they are foul. Human beings who keep smelly, burping, unruly, butt-licking beasts in their houses with them, allowing those beasts to lounge on the furniture, gulp up their gruel in the kitchen, press their slimy noses against the front windows, shed their hair all over the floors, growl menacingly at innocent mail carriers, then stretch their filthy bodies across the bed at night must be, by definition, dog lovers. It's shameful, in other words. So, do we really have to talk about it?

This hesitation to discuss the wherefore and the how come and the "what the hell?" of the pet-owning affliction, then, informs my approach to the upcoming "Nature" special "Why We Love Cats and Dogs" (premieres 8 p.m., Feb. 15, on PBS). I love my dogs for the same reasons I love long naps and babies and enormous oatmeal cookies: They're delicious and fun and perfect and they bring pure joy to my life. See how dirty you feel now? Did we really have to talk about it in the first place?

The point is, hearing about why other people, people who define themselves as "pet lovers," love their pets is, to me, a little bit like discussing sex acts in mixed company -- or, worse yet, talking about sex with a "sex lovers" group. It's all so obvious, why put it into words? No, I'm saying shut up about it already. Oh Jesus, you just had to put it into words, didn't you?

"They bring out the softer side of me," one cat lover tells the "Nature" cameras. "Good for you," I think. "Now shut up about it." "We share a very special relationship" says a dog lover. "Great," I think, "but keep it to yourself." Another woman explains how, when she broke up with her boyfriend, she told him, "I just wish I could love you like I love [my dog] Zachary." "Well, that sort of makes sense," I think.

"I gotta find a girlfriend who likes to sleep with the dog in the bed. I'll do anything you want, lady, but the dog's gotta sleep in the bed," says one guy, whom I miraculously don't hate on sight, maybe because he's hot. His dog seems cool, too.

"I think that people tend to be overindulgent of their pets," says another guy, whom I strongly dislike for no reason. Maybe because he's right.

"I think I would give up my baby before I'd give up my dogs," says another lady, who is clearly deranged but whom I still want to invite over for a beer.

In the end, this "Nature" special accomplishes something pretty incredible: It manages to make pet owners appear entirely reasonable for loving their animals to an unreasonable extent. Somehow, they found a bunch of dog and cat lovers who are smart and charismatic and funny and not creepy at all. (If you've ever been to the local dog park, you know how rare that is.)

And that's laudable, because who really wants to be a dog lover who walks around hating other dog lovers all the time? And how absurd is it to hate people just for loving something that's quite plainly lovable?

In fact, I don't think there's anyone I hate more than people who can't shut up about how deeply sick and wrong it is to love your dog and call her stupid names and treat her with the respect and kindness and around-the-clock fawning and admiration to which she's clearly entitled. I have a big problem with people who want to hold court on how bad it is for a dog to be invited onto the bed or the couch and squeezed and kissed and anthropomorphized. "Dogs were meant to roam around in the wilderness," they remind us, "ripping little animals apart all day long! Dogs weren't meant to lounge about on the furniture, wimpering for more Snausages!"

Listen, people. I recognize that. If I could afford a grand, wooded estate that I could stock full of innocent, overweight, slow-moving squirrels for my dogs to hunt down and rip to shreds, I'd do it in a second. I'm an animal lover, don't you get it? I feel tremendous guilt over not being able to give my doggy the sheer pleasure of sinking her sharp teeth into the warm hide of a live, wriggling squirrel. I ache for her not knowing the thrill that comes from that intoxicating, panicked screeching for mercy! My poor little honey lamb has never felt the spray of warm blood on her nose! Do you think that doesn't break my heart? What kind of a monster do you think I am?

And look, let's limit this to practical concerns: I know my dogs don't want the hugs, just a few well-aimed scratches, thank you very much. I know they'd prefer three hourlong walks a day instead of just one. There's only so much I can do. But beds and couches are more comfortable than the floor. The filthy beasts are already forced to sleep on the floor at night, they wait patiently until I give the OK before they eat, they listen to me at least half of the time. They're treated like second-class citizens occasionally. Sometimes I even acknowledge their nonhuman status by calling them "dummies," as in, "Hey, dummies!" and "Aw, you're such a stupid little pea-brained dumb-dumb. Come up here and let me rub your belly, stupid."

Of course these dogs serve as substitutes for healthy relationships with other human beings! Why else would we allow untamed, hairy, carnivorous stink bombs into our homes if we didn't have some deep pathological neediness lurking in our very souls?

So, what, you expect me not to project all my emotional needs and fears onto my dog? Why, so I can project them onto some innocent human being? That's how people get hurt! That's why most marriages fail! You want me to smother my husband with kisses and bear hugs every night? I'd start to gross him out in a matter of weeks. You expect him to lick my feet and say, "Ri rove roo" when I hold a cookie over his head? I'd lose respect for him in less than a second. That's why I have subordinate pack animals around, so I can be bossy and demeaning to something that finds being bossed around and demeaned vaguely relaxing.

Haven't you ever seen "The Dog Whisperer," wherein the prophet Cesar Millan teaches us that dogs need lots of exercise, and they need to be ignored and insulted as often as possible? Look at his dog pack: They're all so relaxed. They recognize his word as the word of God, no need to ponder big, unanswerable existential questions like "Why haven't I ripped the guts out of a rabbit lately, and why shouldn't I rip the guts out of this annoying Rottweiler instead?" or "What is that smelly thing stuck to the pavement over there, and does it taste good?"

Yes, it's true, Millan doesn't entirely approve of projecting our emotional needs onto our dogs. But what does he know? This guy was an illegal immigrant, washing cars for a living 20 years ago, and now he's reclining on Oprah's butter-yellow couches, chatting aimlessly about his favorite animal. Trust me, I've met Cesar Millan. He's handsome and dashing and self-possessed and charming as hell. Cesar Millan bestrides the mortal world like a colossus. What does he know of the deep pathological neediness that lurks in mortal souls?

So that's where this episode of "Nature" -- which is very entertaining and funny and well worth any pet owner's time, by the way -- leaves me: torn between my hatred of dog lovers and my hatred of the people who hate dog lovers. My position is insupportable. It springs from self-hatred, emotional longing and an inability to play nicely with others or to derive my identity from being part of a warm, openhearted community. I have big problems. I am fundamentally unwell. I am unlovable.

Where's my princesshund anyway? Where's my crocadonkey? Aw, there you are, you big idiots. You love me, yes you do! That's right, I love you, too, stupid dummies. Mommy loves you, too.