Treasury Secretary Tim Geithner didn't have all the answers for the Senate Banking Committee, but the senators didn't have any solutions for Wall Street either. 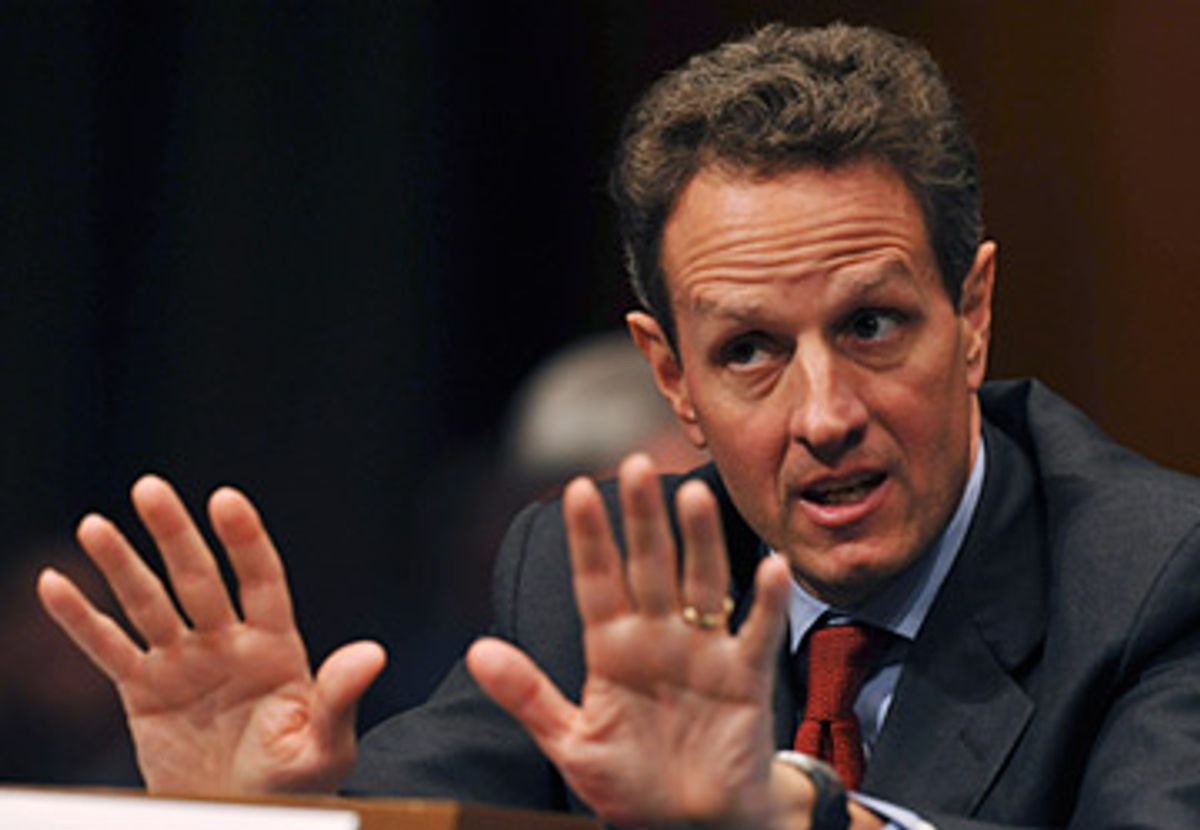 U.S. Secretary of Treasury Timothy Geithner outlines the Obama Administration's plans for the economy while testifying before the Senate Banking, Housing and Urban Affairs Committee in Washington, February 10, 2009.

About an hour and a half into Treasury Secretary Tim Geithner's marathon appearance before the Senate Banking Committee Tuesday afternoon, Sen. Bob Corker, R-Tenn., got right to the point. He noted that on Monday night, President Obama declared that Geithner would lay out a specific plan of action to address the financial crisis in his speech Tuesday morning. "But we didn't get that," said Corker. "Your plan was vague."

Fair enough. Wall Street investors, econobloggers and senators all agree: Geithner's speech was lacking in specificity (as is a "fact-sheet" posted to the new Web site, FinancialStability.gov), particularly on the critical issue of how the government plans to value the toxic assets currently weighing down the balance sheets of financial institutions.

In a process of give-and-take that lasted well over three hours, a more nuanced view of Geithner's strategy did emerge, albeit still lacking in the kind of detail likely to satisfy the markets or the pundits. In Geithner's ideal scenario, the issue of asset valuation will only be solved when private capital reenters financial markets and starts buying up the bad assets. In Geithner's opinion, a key reason why private capital has been unwilling, to this point, to play in these markets is related to a lack of "appropriate financing." Private sources of capital are too worried about their own potential losses should they make a bad bet on a busted mortgage-backed security. The government, Geithner thinks, can provide the financing necessary to private capital that will encourage it to get more involved and set in motion the process of price discovery that finally resolves the big freeze in credit markets.

At least half a dozen senators expressed confusion as to exactly how this strategy of asset valuation will work. And nobody seemed particularly assuaged by Geithner's basic answer: "It is enormously difficult to decide on a mechanism that will give us confidence that the values are fair and realistic and the government understands the risks it is assuming."

That was neither the first nor the last time that Geithner uttered the words "enormously difficult" during the hearing. Honest, perhaps, but not necessarily a confidence-builder from the new Treasury secretary. But here's the rub: Neither the Republicans nor the Democrats on the committee seemed to have anything better to suggest. There is no constituency for nationalizing the banks in the Senate, but there is also a recognition that in the absence of government help, the financial system may well collapse -- and a functioning banking system is necessary for a functioning economy. So something has to be done. There did appear to be a widely shared understanding that whatever action the government takes to solve the crisis will be fantastically expensive, perhaps on the order of a couple of trillion dollars -- a scale that makes quibbling over $100 billion here or there in the stimulus package seem like bickering over small change.

Sen. Corker suggested "that we should just take our medicine and get the country moving again." By which he appeared to mean that we just pony up the cash necessary to fix the system -- perhaps a surprising sentiment for a Republican senator, but one that might possibly be taken as a sign that some Republicans in the Senate do recognize reality, in contradistinction to their colleagues in the House.

Geithner did not ask for additional money during his testimony. Indeed, he appears to be striving to keep government outlays at a minimum, which is why he is banking, so to speak, on getting private capital back into the system. But barring that, there will be difficult decisions to make down the line -- and ultimately, the quite likely prospect of very intense government intervention in the financial system, regardless of ideological desires. In my mind the most meaningful exchange during the hearing occurred during some back-and-forth with Sen. Jon Tester, D-Mont.

Tester wondered if there was any scenario in which the Treasury Department would allow any of the 14 largest financial institutions to fail.

Geithner responded that "we will take whatever action necessary to prevent the kind of failure that could lead to a larger systemic failure."

"So these institutions are too big to fail?"

"I don't want to use those words," said Geithner. And then he made a revealing comment. "But as a basic principle, conditions should escalate with the level of assistance."

Taken to its logical consequences, if the Treasury follows through on its intent to do whatever it takes to bail out Wall Street, applying such principles seems bound to lead to de facto nationalization of large portions of the financial industry.