The media says Americans have the economic blues. But we're meeting these down times the way we always have: Not with resignation but with grit, compassion and humor. 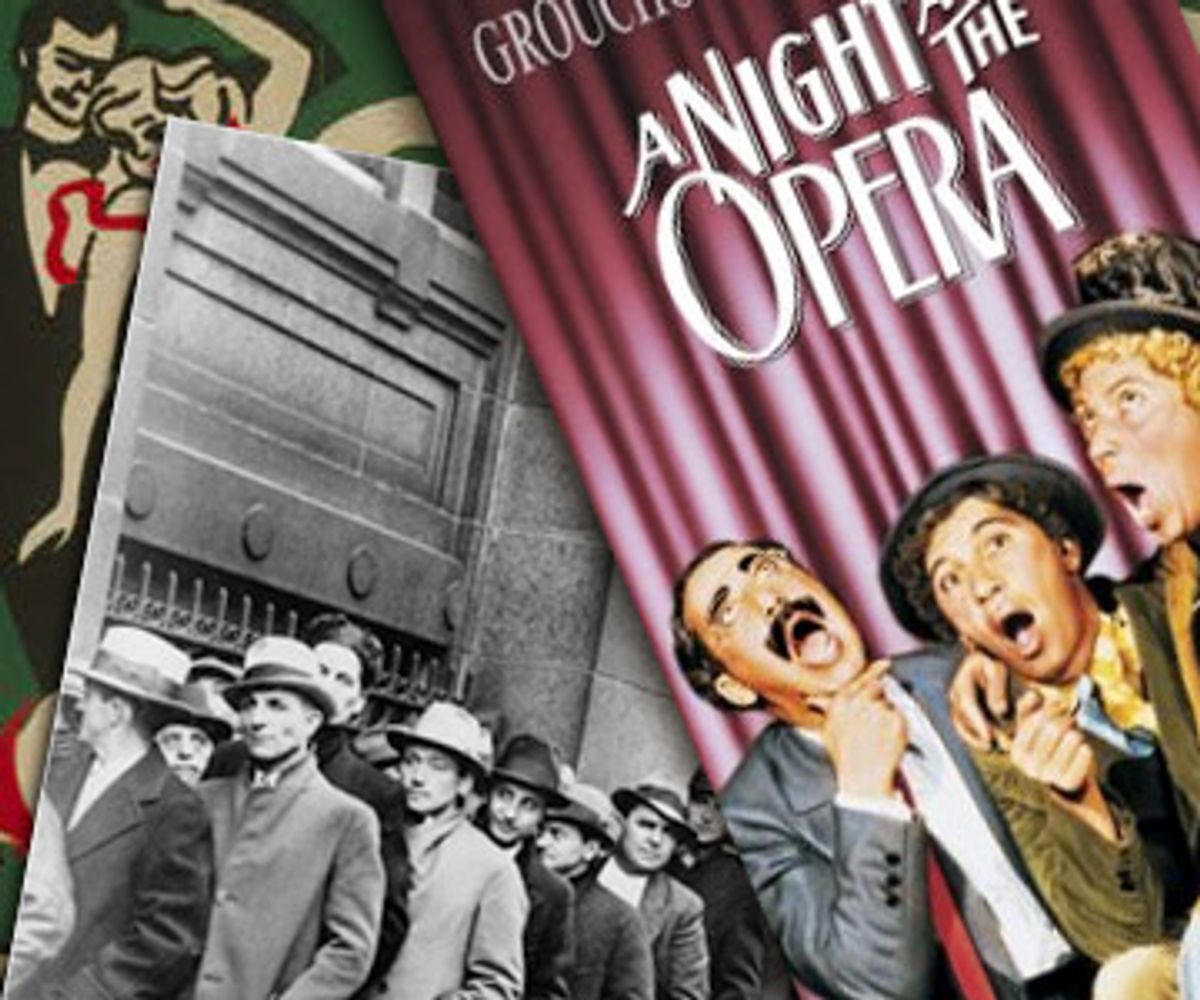 According to American legend, when the stock market crashed on Oct. 29, 1929, flocks of stockbrokers jumped to their death on Wall Street, in violent parody of down-trending graphs and ticker-tape parades and calendar pages flung from windows on New Year's Eve. It never happened.

The fallacy of American capitalism is the equation of our economic status and our mental well-being. In a country where we routinely define ourselves by our job, an economic downturn must lead to a psychological downturn. Right?

It becomes oddly pertinent to observe that, as the country faces an economic calamity unequaled since the Great Depression, the employees of the failed brokerage houses and banks in New York are not clustered on the ledges of skyscrapers above Wall Street. (I am afraid if they were, the cry from below would be "Jump! Jump!") The pope of Ponzi, Bernard Madoff, is required by a federal judge to wear an ankle bracelet not because he is a danger to himself, but because the judge fears that Madoff will skip town.

Despite the fury of public opinion, the press has been intent on diagnosing a national economic depression in terms of psychological depression. The New York Times, on its front page last Sunday, headlined: "Florida's Crossroads of Foreclosure and Despair."

In October a Southern Californian murdered his wife, his mother-in-law, and his three sons, before killing himself. The Los Angeles Times diagnosed the killer as "despondent over financial losses."

We do not know yet the precise impact that the recession is having on American suicide rates, but crisis lines have reported increased numbers of callers. The national suicide rate did climb in America during the first five years of the Great Depression. But it crested by 1935, which was also the year when Americans laughed at "A Night at the Opera" -- wherein the Marx Brothers happily embedded themselves within the pretensions of the rich. It was also in 1935 that Fred Astaire romanced the nation; dressed in white tie and tails, he danced with Ginger Rogers in "Top Hat."

The Depression years were the golden years of Hollywood. Americans went to the movies as the economy melted. In some small towns, where people were unable to buy tickets, merchants projected movies onto the side of a building to attract shoppers to Main Street.

You will say, perhaps, that Americans wanted to forget their troubles in the dark. But maybe Americans needed to have their vision restored by the scale of the big screen. And maybe people needed the civic assurance of being in a large audience -- not alone with their worries -- as the crowd of strangers laughed and cried as one.

From Europe have come two recent stories of suicides among the very rich. Adolf Merckle, a German billionaire, threw himself in front a train, after losing a vast portion -- but nowhere near all -- of his wealth in bad investments. In France, Thierry Magon de la Villehuchet, a money manager, committed suicide after learning that his clients' investments -- Bernard Madoff, again -- had disappeared. Both suicides were Japan-esque in their sense of shame, and quite unlike the recent scenarios from Wall Street.

Dick Fuld, who oversaw the collapse of Lehman Brothers, continues to live in his Greenwich, Conn., mansion. (Kudos, Dick!) John Thain, who managed to sell off Merrill Lynch as it was accumulating billions in debt, was recently fired from Bank of America. He promised to repay the million dollars of bank money he used to redecorate his office. But he exited the building with million-dollar bills stuffed in his briefcase. Robert Rubin (once proclaimed "the best secretary of the treasury since Alexander Hamilton" by Bill Clinton) resigned from Citibank after receiving millions of dollars for services that have never been adequately described to shareholders. Rubin plans some sort of return to "public service" in the future.

A friend of mine who teaches philosophy at Harvard tells me that for the past 10 years or so -- years of the Wall Street boom -- his best students, the most subtle thinkers, the elegant stylists, were bedazzled by the earning power of fund traders. The hedge-fund billionaires seemed to belong to some new global civilization, and philosophy students were by no means immune to the lure. "Now, it is unclear if my bright students will want to emulate them," my friend says.

Vladimir Ilyich Lenin described fascism as "capitalism in decay." Though Lenin died five years before Wall Street crashed, his epithet anticipated the rise of fascism and Nazism across Europe. Anarchists and Marxists and socialists also seized the bullhorn and swayed crowds.

With the 1930s as our guide, we should not be surprised today by the riots and demonstrations in Chinese factory towns and along the boulevards of Paris, and at the Republic Windows and Doors factory in Chicago. Economic depression gives rise to political unrest that makes "depression" a misnomer when applied to human emotion or behavior.

But all was not street riots and the rise of tyrants in the 1930s. John Updike, the great American writer who died last month, remembered in an interview the fears of his childhood -- life savings lost, people thrown out of work. Updike was born in 1932; he remembered also strangers' kindnesses to one another: "It was considered correct form to give a dollar to bums when they came to the back door, and when they did, we did."

The social cohesion attributed to the '30s (I, too, have heard such stories) and the war years and 9/11 might be mythical. I don't know. But a novel like John Steinbeck's "Grapes of Wrath" was written for middle-class readers during the Depression. Steinbeck summoned compassion for the poor during years when the middle class of California's Central Valley was so cruelly organized against the "invasion" of Okies and Arkies.

As grandparents and great-grandparents who lived through the Depression will tell you, families were often strengthened in adversity, not splintered. And there was, in the constriction of family budgets, a sense of the essential. Today's economic downturn is the result of an unbridled credit economy -- the expectation of ever-increasing earning power. In the past year, Americans have learned caution; we are saving money, not spending. Economists tell us we will extend the recession if we keep saving. But the question is whether Americans are going to find a sense of well-being by living modestly rather than by shopping.

Finally, I would speak of the bravery of Americans. All over the country, people are uneasy, worried, yes. But they are getting out of bed to join job lines and job fairs. In Washington, there is much debate about the appropriate girth of a "stimulus bill." But responsibility is the stimulus that gets people out of bed and dressed and out of the house.

You see them in hotel lobby job fairs -- men and women of every age, their résumés in their hands. At Great America in Silicon Valley, a call for seasonal hiring gathered hundreds of applicants, 20-year-olds alongside 50- and 60-year-olds. In Miami last week more than a thousand people showed up for 35 fire department openings. The crowd formed before dawn. Everyone in line looked solemn. Not expectant. But resolute.

We are more than the sum of our dollars. In adversity, this is what America is learning. The national mood is more complicated than an economist has the ability to graph.

I remind you: The '30s were a time of bread lines and tent cities, a time of humiliation and want; they were also the years of the big bands -- Ellington, Goodman. Americans wanted to sing and to dance. Busby Berkeley made dozens of loony musicals with hundreds of Americans, in swimming suits, tuxedos, sequined gowns, dancing. At ground level the movement was as confusing as a nightmare. But from a bird's-eye view, a skyscraper view, the movement of lives seemed like a vast machine, ready to work.