Clive Owen and Naomi Watts try to take down a crooked bank in this audacious action-thriller from the director of "Run Lola Run." 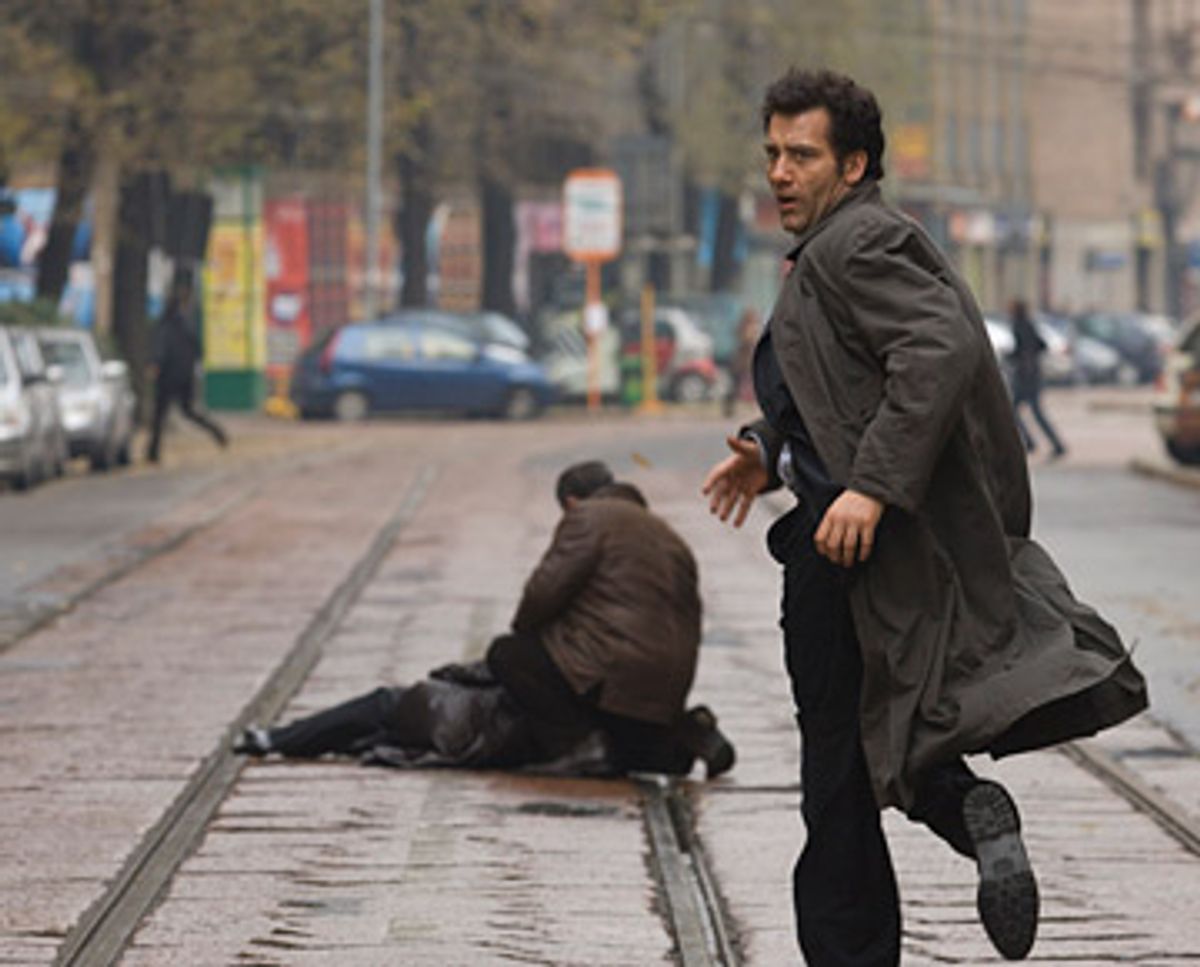 German director Tom Tykwer's "The International" is so unlike any action-thriller on the current landscape that it's practically a citizen of its own invented movie country. Clive Owen stars as Louis Salinger, a scruffy, emotionally tortured Interpol agent who's working with an assistant district attorney based in New York, Eleanor Whitman (Naomi Watts), to bring down a shadowy multinational bank involved in money laundering, weapons trafficking and the backing of disgruntled rebel armies -- in other words, it's an outfit that gleefully profits off political unrest, which is why it seeks, as one character puts it, to make nations and individuals "slaves to debt."

To crack the foundation of this evil monolith -- it goes by the efficiently anonymous acronym IBBC -- Salinger and Whitman spend their time chipping away at the organization's chain of command, hoping, ultimately, to reach the guy at the top, chilly Euro-snob Jonas Skarssen (Ulrich Thomsen), whose eyes are as blank as dollar signs. He proves elusive, leaving Whitman and Salinger to chase after meager fragments of information -- from Berlin to Lyon, France, to Milan, from New York to Istanbul -- with the aim of piecing these elusive, mutable facts into some meaningful whole.

The plot of "The International," which borrows elements from Bourne and Bond, is perhaps more convoluted and more preposterous than it needs to be. (Screenwriter Eric Warren Singer was inspired by the real-life story of the Bank of Credit and Commercial International, which funded all sorts of unsavory activities worldwide until its demise in 1991.) Sometimes the intricacies of the story are blurry and indistinct: Important details about a character might be wedged into the narrative with just a line of dialogue, or briefly alluded to and then waved off altogether. Worst of all, maybe, is that Watts is left to limp her way through the movie, playing a desperately underwritten character. She makes the best of even the tiniest moments -- as when, for example, it dawns on her that her work may endanger her husband and child. There just aren't enough of those moments to add up to a significant performance.

Maybe that sounds like too many problems for a thriller to survive. Yet "The International" succeeds at all the things you can't tote up on a score card. And in the end, it works precisely because of all the things it's not -- if only more mainstream Hollywood pictures had these kinds of negatives going for them. This is a thriller where the cutting, even in most of the action sequences, is meticulous but leisurely. The elaborate set pieces are so beautifully worked out that you could take them apart, shot by shot, and fit the pieces back together like an intricate Chinese puzzle. The movie's rewards unfold slowly and quietly, but the payoff, despite the fact that few of us are feeling too kindly toward the banking industry these days, is hardly cathartic. Instead, the picture inches, scene by scene and layer by layer, toward a mood of restless melancholy. Rather than coming at us aggressively, "The International" demands that we come to it. We're guests within its borders, but there's no desperation in the way it works to keep us there.

I'm sure that makes "The International" sound odd, particularly for big-budget mainstream entertainment. The wonder of "The International" is that it is odd, to the point of audaciousness. Tykwer's 1998 art-house hit "Run Lola Run" made bold assertions about what an action movie could be; it was a brash delight that ticked along with remarkable precision. From there, Tykwer went on to make several imperfect but always interesting movies (among them the 2001 "The Princess and the Warrior" and "Heaven" in 2002), none of them as vital and arresting as "Lola."

And "The International" isn't, either -- yet it's so self-assured, so assertive in its devotion to craftsmanship, that it proves Tykwer is continually building on his promise as a filmmaker, not squandering it. The picture opens with a halting, cautious conversation between two men in a parked car, one in the driver's seat, the other in the back -- we can discern little about them other than that one might be an informant and the other an informee. All we can see of the first man's face is his piercing, nervous eyes, reflected in the car's rearview mirror. "You need to relax," says the guy in the back, although it's clear he's the more anxious of the two. "I'm more comfortable tense," says the guy in the front, a terse sentence that clicks the movie into its starting position.

From there, the picture takes off like a shot -- a slow and steady one. Tykwer revels in working subtle, sleight-of-hand tricks with the camera: A figure who passes by in a blur just made something happen, but what? A sharpshooter sights his target with workaday confidence, only to realize that a shooter even sharper than he is has already worked out a better angle -- the camera gives us just enough clues without giving the whole game away. Tykwer pulls out all the stops in a fantastically choreographed shootout that unfolds, with steady and brutal grace, inside the nautilus of the Guggenheim Museum. (Frank Lloyd Wright devotees should know that no ramps were harmed in the making of this picture. Aside from a few establishing shots, the sequence was filmed inside a giant replica built in Berlin.) So many contemporary action-movie directors just crash through a violent action scene, knowing they can add faux energy in the editing room later. Tykwer, on the other hand, honors the laws of physics: Energy can neither be created nor destroyed, although it can be converted from one form to another and transferred from one object to another. In the Guggenheim sequence, in particular, Tykwer does all that converting and transferring visually. He has planned his shots so carefully that the editing feels organic.

In fact, "The International" gets most of its narrative shape not from the dialogue but from the visuals. Shot by Frank Griebe, who has frequently worked with Tykwer, the picture has a somber, elegant look. Even though it hops from one glamorous location to another (Istanbul, with its collage of sun-warmed rooftops, looks particularly resplendent) the images never have that stiff, flattened, travelogue quality. They always look like places where people work and live, and where time passes.

Maybe that's because, in the end, "The International" is largely about the passage of time and its wearying effects, particularly on a reluctant hero like the one Owen plays here. We don't get much back story on Salinger. The other characters keep alluding to a crackup he suffered in his previous job, at Scotland Yard, but his past is really just a shadowy abstraction.

On the other hand, a face like Owen's doesn't need a complicated back story -- it fills in the blanks well enough on its own. The plot's moral complexity, such as it is, ultimately hinges on Salinger's encounter with a high-level baddie (played by Armin Mueller-Stahl) who has years' worth of evildoing packed into the suitcase of his past. But most of the moral weight of this story is carried in the dark circles under Owen's eyes. The lack of fast cutting in "The International" actually enhances the film's sleepless, restless spirit -- the idea, maybe, is that the world around Salinger is moving fast enough as it is. Running in place, even in his perpetual state of spiritual exhaustion, is his only hope. As Owen plays him, Salinger is a man without a country who still strives to be a citizen of the world. No wonder he's tired.