Newsflash: Whores and wanton hussies happier, more productive than ever! Bed-hopping tarts rule the small screen, from "Secret Diary of a Call Girl" to "Mistresses." 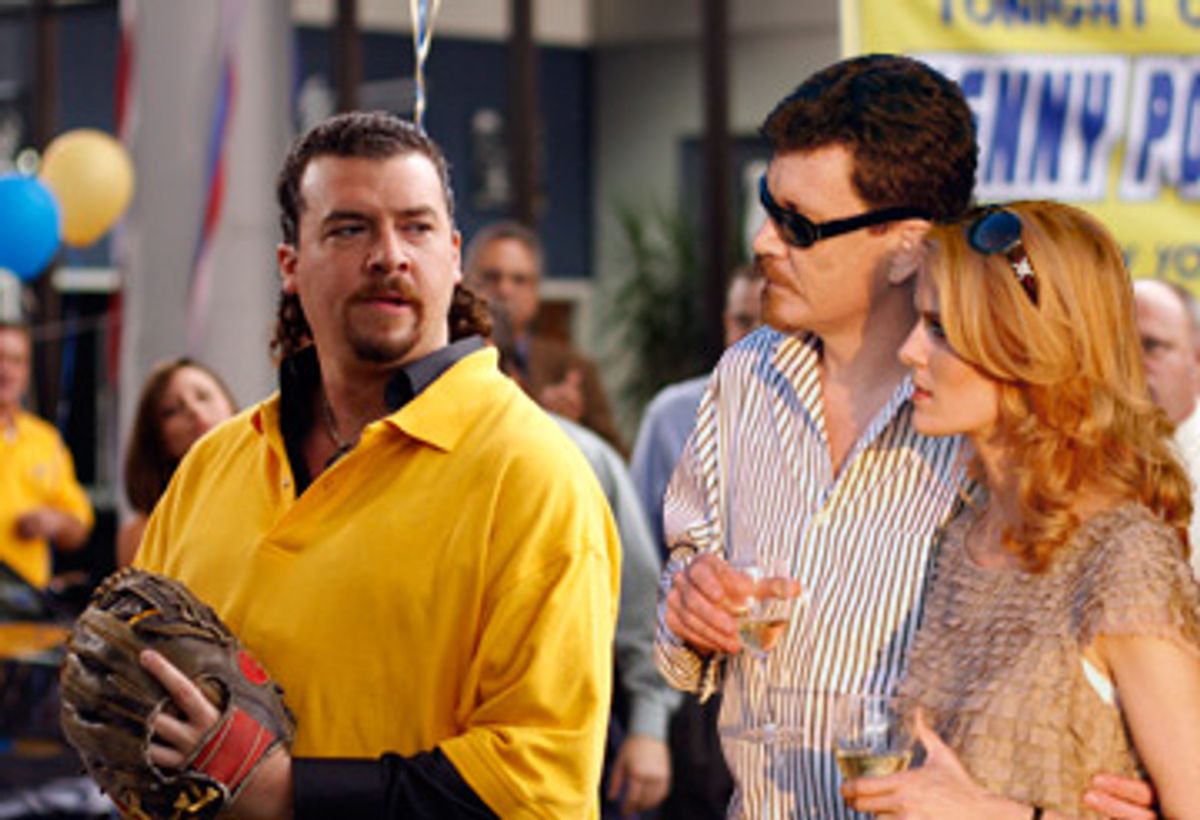 Remember when everyone was intrigued by cops? We wanted to watch them solving crimes, nabbing criminals, battling drinking problems and going through tough divorces.

These days, the world is bored by cops. We want bed-hopping strumpets instead. We want to watch as wanton floozies cheat on their husbands, grope their much-younger lovers and have illicit dalliances with lesbian brides. We want to see classy courtesans put on maid uniforms and pee on prominent politicians. We want to gasp at the brazen, oversexed antics of the modern-day harlot, balancing her debauched profession with her everyday life.

Of course these shameless tarts' stories are morality tales, just like they always were. But this time around, the moral of the story goes like this: Carpe diem, whores and tramplets! Get out there and grab every man, woman and man-child who strikes your fancy! As long as you lounge around in black lace thigh-high stockings, smoking and brooding away your ample free time as the camera circles, we're behind you 100 percent!

The question is, are these fables of unchaste women made for sexually frustrated men, women or both?

Populated as it is by attractive, thoughtful, upper-middle-class ladies and the handsome, fawning men who adore them, BBC America's "Mistresses" (premieres 8 p.m. Friday, Feb. 20), at least, presents a bona fide bodice-ripper. Yes, these are regular, lovely ladies, women who were happily following the bourgeois moral codes set before them, until one day, a sexual opportunity presented itself that was just too steamy and utterly wrong to resist!

Take Katie, an attractive doctor in her late 30s. How could she stop herself from falling in love with John, a strikingly attractive, intelligent man who just happened to be married? He was about to leave his wife for her, in fact, when he was diagnosed with cancer. Katie helped him end his life before his disease got too unbearable, but then his pesky -- but also deliciously hot! -- college-age son, Sam, started snooping around after finding one of Katie's love notes in his father's pockets. What could Katie do? She tried taking Sam off her patient list, but that only made him more suspicious! She denied any involvement with John, but that only emboldened Sam to make a move on her, confessing, post-kiss, "I've wanted to do that since I was 15 years old!"

Now, true, your ordinary, run-of-the-mill, mature woman might be vaguely turned off by the news that her dead, married lover's son has likely been beating off to the thought of her since he was running around in pajamas with feet. But not Katie! Katie is haunted by his words. And this being the BBC version of a Harlequin romance, she's damned to a life (or at least several episodes) of mooning and nail biting and gazing out rain-soaked windows, longing for forbidden love! Yes, that's right, with a teenager. (Next time, Katie, try dropping by when he's playing Guitar Hero in his dorm room with his friends. Suddenly the irresistible whiff of scandal will smell more like old pizza boxes and dirty socks.)

Of course, as with most poorly written romance novels, we know very little about Katie beyond her longing gazes and deep horndog sighs. Even a half-hour show like "Sex and the City," the rhythms and naughty girl-talk of which "Mistresses" echoes like a half-dead mockingbird, offers more character development and sharp dialogue than this thoroughly uninspired drama.

Take Jess, the devil-may-care, Samantha-alike slut who amounts to a stock character, trussed up in hip costume. "Married men are a no-brainer," she tells her three lady friends over a few glasses of wine. "They're bedroom trained, they're low-maintenance, and, you've got a ready-made exit strategy. No mess, no fuss!" Did the writers steal that line directly from a "Sex and the City" script? Because they should've left in the disapproving glare from Miranda, the witty quip from Carrie and the prim, hopeful redirect by Charlotte.

Without such lively elements, the joke of Jess falls flat within minutes of her first appearance on-screen. Naturally, she's having an affair with her married boss, Simon, but she doesn't really like him, mostly because he's a tool. But see, Jess doesn't believe in marriage. Jess doesn't believe in love. Jess is utterly happy and free, in fact, until she's charged with planning a wedding for a pretty lesbian bride and she finds herself longing for ... forbidden love! Here's how it unfolds:

Hot bride: Are you shagging Simon?

Hot bride: I'll take that as a yes.

Jess: How did you know?

Hot bride: You're gorgeous. He's your boss. You're totally shameless about the fact that you think he's a prat. What I really want to know, though, is, don't you get fed up with it? Always being second.

Jess: I'm not. I'm first to me. I mean, I have the life I want. No kids, no trips on Sundays to his parents. And I don't have to lie and tell him that I love him. So what's to get fed up about?

Jess: Can I ask you a question? When did you start dating women?

Hot bride: About five years ago. I imagine you want to know why. It's not so much a mechanical issue as -- it's just men are so tedious. Women are so beautiful.

You have to admit, she has a point. But then, some of us are turned on by the hairy tedium of the modern man, and turned off by hairless pretties, sipping white wine from immaculate glasses and gazing thoughtfully out windows, longing, longing for ... forbidden love!

I mean, talk about tedious. All these shameless strumpets do is shower and style their hair and gaze out the window, pursing their glossy lips all day long. When they finally give in to temptation, it's understandable because the men involved are, across the board, madly in love with them. (Yes, this show is obviously made for women.) Now here's Jess, the one exception, joining the gaze-fest over a hot gay bride whom she not so long ago referred to as a "rug muncher."

I could tell you all about the rest of this repetitive "Footballer's Wives" meets "Desperate Housewives" crew, from Siobhan, who's trying to get pregnant with her good-guy husband Harry (who loved her since the moment he saw her) while secretly longing for forbidden copy-room love with her dashing blue-eyed co-worker Dominic (who wanted her from the moment he saw her), to Trudi, who's trying to recover from the unexpected death of her husband on 9/11 by sniffing out forbidden love with a divorced guy (who seems to be madly in love with her but only after her large 9/11 settlement arrives). But really, the whole show is so repetitive and plotless and gutless and beside the point, it's hardly worth your time. Yes, "Mistresses" is just the sort of naughty but hopelessly superficial soap to send us all back to the grubby halls of the police precinct in droves.

Whore to the core

But while we're on the subject of naughty but superficial smut, we should probably revisit "Secret Diary of a Call Girl" (10:30 p.m. Sundays on Showtime), everyone's favorite lighthearted romp through the wild and wacky life of a modern-day prostitute. Yes, being a high-priced whore is still just as fun, glamorous and satisfying as it was the last time we met up with perky Hannah (Billie Piper), aka Belle, the pretty, sharp, totally well-adjusted hooker at the center of this frothy half-hour dramedy.

Even the first season's limited woes have faded into the background: Belle works for herself now, she's an "independent prostitute," which means she has no agency, no madame, no pimp with a violent streak. Belle is a freelance sex worker, earning big money simply by throwing up a Web site, reading through her e-mail, and developing a trusty, clean, highly attractive client base. Yes, enterprising whore-lets, it really is that easy!

In fact, Belle's life is a little bit too bright and pretty this season -- but that's no surprise, I guess, on a show about the endless amusements and countless little joys of prostitution. Hannah is late for her nephew's christening, sure, but otherwise things are going swimmingly. She's started seeing a really nice guy who doesn't know she's a whore yet, but he's bound to be sympathetic about it, once he sees how clean and harmless and lucrative it all is. (Unless he's a possessive, old-fashioned prig!) Belle has taken an aspiring prostitute under her wing and is starting to show her the little ups (it's so fun!) and downs (sometimes clients get a tiny bit creepy!) of the call girl's life. She briefly contemplates getting a boob job, but then her doctor -- who's also her client and pal, of course, since all of her clients are handsome, well-meaning, successful, lovable professionals -- assures her that her breasts are absolutely perfect and she shouldn't change a thing. (Sounds just like your typical whore-frequenting plastic surgeon to me!)

All of this smooth sailing is almost enough to make you want Belle to go crawling back to her former madame, Stephanie (Cherie Lunghi). At least Stephanie had an edge and could be counted on to point out the ugly underbelly of the escort business, since Belle rarely seems to notice. "A city without whores is like a house without bathrooms," she tells Belle in their brief encounter, hinting at the rather demeaning practicality of Belle's one true calling. And then, upon parting, she reminds Belle that Belle can always work for her again, if she so chooses. "[I]f you ever change your mind, the door is always open -- as long as your legs are." Hmm. She makes the life of the streetwalker sound slightly distasteful. What's her problem, anyway?

Although Belle appears to be falling in love with her brand-new doctor boyfriend, it's not hard to guess where she'll wind up in the end, and something tells us it won't involve frilly prams and spit-up bibs. As she states at the start, "I get a rush from this job that I wouldn't get from a normal job."

So you see, girls? Grabbing ankle on demand isn't just profitable, it's thrilling, fulfilling and positively recession-proof! And when you're too old to turn tricks, you can write a tell-all book, option the rights to the TV series, and live happily ever after! Yes, Virginia, sluts' dreams really do come true!