The great California crash and burn

The stimulus package can't save the Golden State, nor can its own government. Who to blame? Californians. 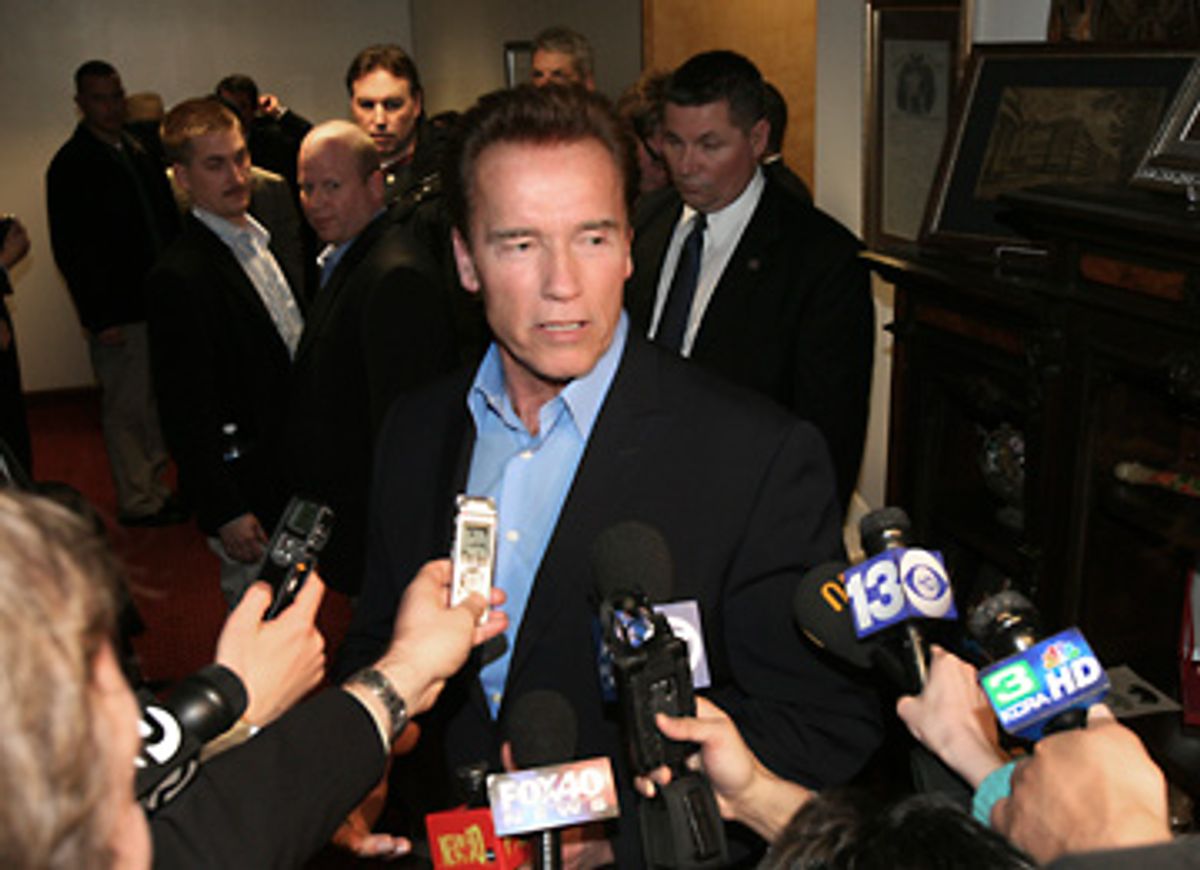 Gov. Arnold Schwarzenegger talks with reporters after meeting with members of the Senate Democratic caucus at the Capitol in Sacramento, Calif., Sunday, Feb. 15, 2009.

The Assembly is a done deal. In the Senate, only one additional Republican must come forward, before California can address a prospective $42 billion budget shortfall in 2010, through a combination of spending cuts, tax hikes and borrowing. When you stop to think about it, it's quite an extraordinary story. One man, Abel Maldonaldo, the only Latino Republican in the California state Senate, has the power to determine whether the eighth largest economy in the world can continue to function as a going concern.

Sen. Barbara Boxer claims that Californians will receive, in total, about $78 billion over the next two years in tax cuts, Medicaid reimbursements, and funding for education and infrastructure and other services. But the budget deal that Republicans are opposing includes $15 billion in budget cuts alone, so a large part of that influx will only help California barely stay afloat. On Tuesday, Gov. Schwarzenegger announced plans to immediately stop work on 275 public works projects that had previously been deemed too essential, or too far along in construction, to be halted. The projects are pegged at costing about $3.8 billion  -- which, coincidentally, is almost exactly how much money California stands to receive for infrastructural improvements from the stimulus package. So, in California, federal help on infrastructure only adds up to covering the cost of the most essential public works projects in the state.

California will get more help from the stimulus package than any other state, and the White House claims that the stimulus will result in 396,000 jobs created in California, but on the infrastructure front, it's hard to see the aid as anything more than a tourniquet that might, at best, slow the bleeding. Some limbs are still gonna have to go.

Who is to blame for California's mess? In large part the problems are self-inflicted. California indulged itself in a runaway housing boom that beggared description, fueled by subprime mortgage lenders headquartered in California's own Orange County. Sure, Wall Street banks aided and abetted the spree, but California took the madness as far, or farther, than any other state, save possibly Florida or Arizona. The housing bust then catalyzed a property tax revenue collapse that gutted the state budget. Plug in the legacy of 1978's Proposition 13, which instituted the two-thirds majority requirement for tax increases, and you've got a mess that's very hard to fix. Over the past decade, the Republican Party has done a terrific job of making itself increasingly irrelevant in California politics, but Proposition 13 guarantees that the state GOP can still play the role of spoiler. The $15 billion of cuts from the state budget will decimate public education and a swath of other government services, but that doesn't appear to be enough for the Republican hardcore.

At this stage, it seems worth remembering that in 1932, when Franklin Roosevelt clobbered Herbert Hoover, Democrats achieved a filibuster-proof majority in the Senate, giving the new administration a relatively free hand to govern as it wished. (It also helped that the Republican minority didn't define itself as Taliban freedom fighters prepared to blow up the government to prove their ideological purity.) Imagine if a two-thirds majority had been required to pass a bill, and the GOP then styled themselves according to how the GOP carries itself now? No New Deal. No Works Progess Administration. No Social Security. No Securities and Exchange Commission. Et cetera.

Hard times are ahead for California, and it's hard not to blame Californians for it. They voted, in 1978, to restrict government's ability to govern. And they, in pursuit of their own McMansion vision of the no-money-down, option-ARM, subprime good life, fueled an unsustainable housing boom that may have wrecked the state's economy for a decade or more to come. They even helped launch the political career of Ronald Reagan, the man who, in 1980, won the presidency in part by tapping the same anti-government emotions in the American public at large as did Proposition 13 in California just two years earlier. If you are willing to trace the recent excesses of Wall Street at least in part to the deregulatory impulses set in motion by Reagan, well then, you have to concede, California has a lot to answer for. And it looks like the piper has arrived, looking for his pay.