In a Fox interview, the new teen mother makes an almost unwitting argument for reproductive choice before Mom barges in and twists her words. 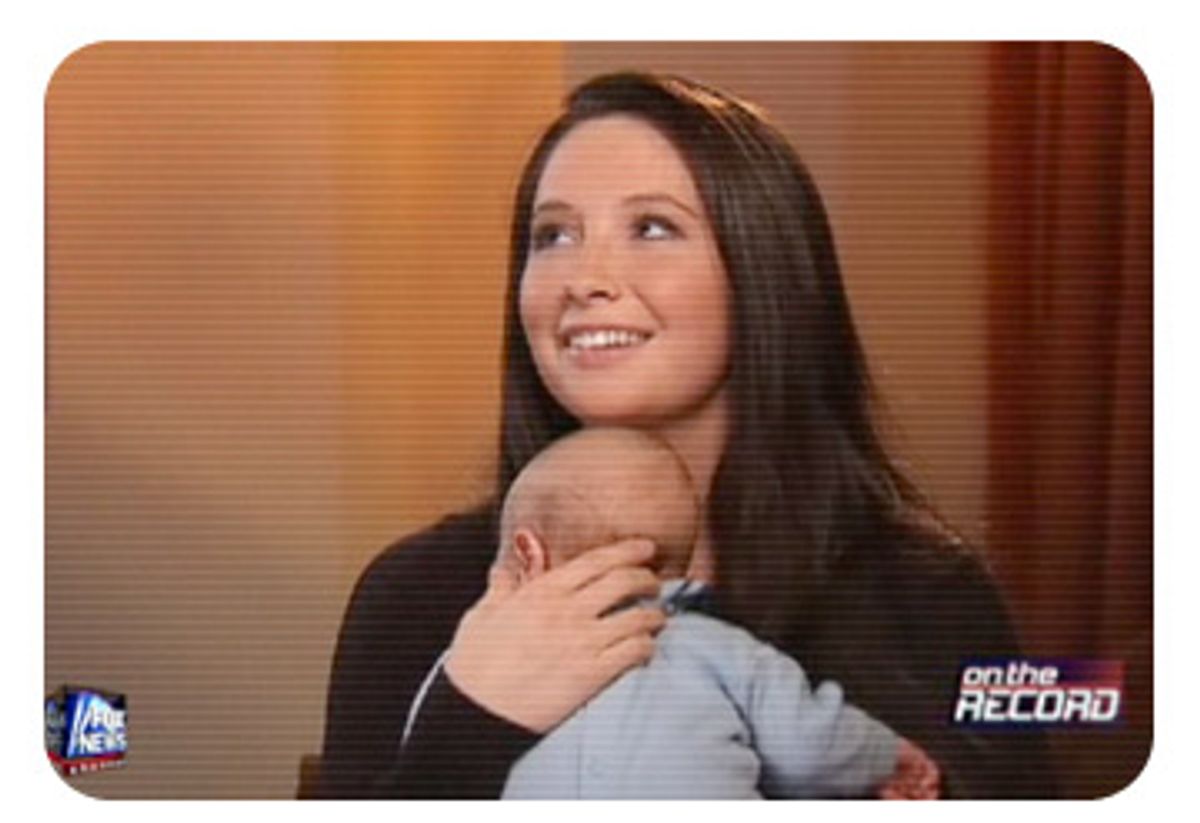 All over the news on Tuesday were clips of 18-year-old new mother Bristol Palin stuttering awkwardly in an interview with Fox News' Greta Van Susteren and saying what many Americans already know all too well: that the idea of teenage abstinence is unrealistic.

But more than just sound bites, Van Susteren's interview with Bristol (and her "surprise-guest" mom) was a vivid reminder of how, sadly, this unremarkable high schooler got dragged into the spotlight by a Republican ticket anxious to paper over its party's family-values inconsistencies with the addition of a just-folks clan led by an Alaskan governor determined to use her family as an illustration of her policies. It was also an embodiment of all that was frustrating and tone-deaf about those policies, and about the governor's candidacy for the vice-presidency.

The Van Susteren interview provided a new chapter in this jumbled saga of gender, reproductive and class politics, kicked off when a craven and desperate John McCain selected Sarah Palin as his running mate in August 2008. Palin's acceptance of the nomination meant the prompt exposure of her then-17-year-old unmarried daughter's reproductive life to the world, a circumstance that made Bristol and her self-proclaimed redneck boyfriend, Levi Johnston, accidental cautionary tales (or poster children, depending on your perspective) for what happens when the faith-infused reproductive health policies favored by her mother's supporters meet real life.

Bristol, sitting down with the Palin-friendly Van Susteren, did not come across as any more eloquent or incisive on matters of sex, pregnancy and new motherhood than anyone would expect of an utterly average teenager, but she did offer up an inarticulate, bumbling and nakedly honest interview about how her life has changed since the birth of her son, Tripp, two months ago. Wittingly or not, she touched on issues close to the heart of reproductive rights activists and feminists who fiercely opposed her mother's candidacy: how her life is no longer her own, how she wishes she had waited 10 years, how the choice to have the child was hers and not her mother's and how abstinence was not a realistic answer. All this was discussed before the governor entered and robbed Bristol of her voice and her arguments, making a mash of everything her daughter had said so far.

According to Van Susteren's slightly implausible setup, Bristol had agreed to do this interview on her own, without the consent of her mother, who had learned of it only the day before. The young woman was talking to Van Susteren, Bristol said, in her plaintive adolescent patois, because, "I hope people learn from my story and just, like, prevent teen pregnancy, I guess."

Van Susteren seemed utterly uninterested in interrogating Bristol in any serious way about what can be learned from her story, or how she would go about preventing teen pregnancy. In fact, the interviewer failed to ask several elephant-in-the-room questions, like whether Bristol supports sex education in schools, the distribution of birth control or the rights of other women to choose abortion.

Fox instead couched much of the story as a cutesy-poo introduction to Tripp (who seems temporarily to have replaced Trig, Sarah Palin's night-owl infant, as the family football), whom Bristol described as both "awesome" and "very, very, very cute."

Bristol told Van Susteren that telling her parents she was pregnant "was, like, harder than labor," and described sitting on the couch with Johnston and a best friend there for support, so petrified about making her announcement that she was "just sick to my stomach," so much so that finally, her best friend had to blurt it out for her. Bristol continued, "I don't even remember it, because it was just like something I don't want to remember."

This young woman, too scared to even enunciate the fact of her pregnancy to her parents, is now a parent herself. Which made it slightly more ludicrous for Van Susteren to ask her whether  her pregnancy was planned. "No, not at all," Bristol replied, laughing nervously. Duh. But Van Susteren was determined, in this mother-and-child-worshiping world, not to lose sight of how blessed and happy Tripp's very existence is. "I realize what joy a child brings to a family," Van Susteren continued delicately, "but was there any sort of sense that maybe this would happen a year or two from now?"

Bristol did a lot less beating around the bush. "Of course," she replied matter-of-factly.  "I wish it would happen in like 10 years, so I could have a job and an education and be, like, prepared, and have my own house and stuff. But he brings so much joy. I don't regret it at all. I just wish it would have happened in 10 years rather than right now."

Bristol also bristled obediently when asked by Van Susteren about how the media "dogged" her a bit. "They thought that my mom was going to make me have the baby, and it was my choice to have the baby, and that kind of stuff just bothered me."

Yes, Bristol insisted, it was her choice to have Tripp. "In terms of the ... whole issue of the right to life and choice and things like that ... this is your decision?" Van Susteren asked. "Yeah," repeated Bristol. "It doesn't matter what my mom's views are on it. It was my decision. And I wish people would realize that, too."

Of course some of them -- not the least of them "The Daily Show's" Samantha Bee -- have realized that Bristol's ability to make her own decision, without regard to her mom's views on the issue, is precisely the freedom for which reproductive rights activists fight, trying to ensure that no daughters surrender control of their bodies to their mothers or fathers or husbands or clergymen or governments.

Bristol went on to make more (perhaps unwitting) feminist points about what, exactly, the responsibilities and consequences are for young women who choose (or are forced down) the path she took.

"I don't know if it's what I expected," Bristol said of young motherhood. "But it's just a lot different. It's not just the baby that's hard. It's like I'm not living for myself anymore. It's for another person." Later in the interview, she again repeated this line -- a heartbreaking point if ever there was one, and one we don't talk about much because we feel obligated to acknowledge that of course motherhood is a sacrifice, of course there are consequences, of course for many women and men, choosing to have children and become less self-obsessed is a pleasure. But so much of what pro-life advocacy is about -- whether it denies people sex education or contraception or access to abortion -- is in valuing the cells that make up a fetus (or baby) more than the woman in whose body those cells have grown.

Bristol's articulation of this quagmire may sound selfish and naive. But what she's describing is how she hadn't fully comprehended that, in having a baby at 18, her value as a young woman with interests and desires and ambitions and goals would now come second to the needs of a child.

"I think everyone should just wait 10 years," Bristol said. "Just because it's so much easier if you're married and you have a house and career. It's so much easier." Bristol described to Van Susteren how caring for Tripp is not glamorous at all. "I'm not the first person it's happened to, and I'm not going to be the last," she said. "But I'd love to be an advocate to prevent teen pregnancy. Because it's not like a situation you want to strive for, I guess."

I guess not. Van Susteren then did ask her, in a roundabout way, about whether she had a religious or philosophical objection to contraception. Bristol said, "No, I don't want to get into detail about that." And then came the line that would come to stand in for the whole interview: "Everyone should be abstinent or whatever, but it's not realistic at all."

Bristol's interview was nearly painful to listen to, so vulnerable and untrained was her description of her love for her son, and her wish that she hadn't had him so young. These sounded like the pure and comparatively unscripted answers of a young woman who was not politicizing her situation, just living in it and trying to describe it to the rest of the world.

But the whole awkward purity of Bristol's interview got wrecked once Mama Palin purportedly "surprised" the pair by entering the room holding Tripp, offering him to her daughter and asking, "You want this joy?"

Gov. Palin opened by claiming to be "proud of [Bristol] wanting to take on an advocacy role and just let other girls know that it's not the most ideal situation but certainly you make the most of it." It was like the elder Palin had put her daughter's words through a meat grinder: What Bristol had said was that she wanted to let other girls know that they should wait 10 years, that their lives would shift beneath their feet.

"Bristol is a strong and bold young woman," Palin said, as Bristol sat quietly -- after her mother entered, she barely spoke further -- "and she is an amazing mom, and this little baby is very lucky to have her as a momma. He's gonna be just fine. We're very proud of Bristol." Palin was missing the point, or part of it, or perhaps making it even louder: Bristol's self-professed desire to prevent teen pregnancy is not just about whether this little baby is going to be just fine, it is about whether his momma is.

But that just wasn't of much concern to Sarah Palin. Noting that, because of her large and helpful family, Bristol "has it perhaps easier, if you will, than other young mothers," Palin pointed out that "many, many, many young parents have been successful in raising their children, and have raised healthy, happy, contributing members of our society. And Bristol and Levi will be parents like that."

To Sarah Palin and Van Susteren's minds, the real story here was not about cautioning other teens, or preventing teen pregnancies, it was about how to deal with them once they'd -- inevitably, it seems -- happened. In Van Susteren's words, about "how important it is for families to pitch in." The Alaska governor, pausing for a moment of generous reflection, said, "I don't know how other families do it. If they kind of assume that the young parent is going to make it on their own, or assume that government would take care of the young parent and child. That's not government's role. This is a role for families to pitch in and help."

So the bigger message here, as spun by Greta Van Susteren and Sarah Palin, is that abstinence is a naive peg on which to hang our contraceptive hopes, but that when our daughters reproduce before they finish high school, we need to move beyond it -- not to discussions of birth control and abortion, but to the fact that the Palins are an unusually big, helpful, supportive group, and that other less fortunate young mothers should go out and get multigenerational families to help them out because it's not the government's responsibility.

How perfectly, sadly nonsensical. And how poignant that the untrained and unrehearsed and inelegant message of the young woman who actually had the baby, the one who said, "I think everyone should just wait 10 years," made far more sense than the politicized jabbering of her elders.