Only losers get the foreclosure blues

Chicago traders applaud while a CNBC stock analyst rants about the unfairness of Obama's housing plan. Is this a great country, or what? 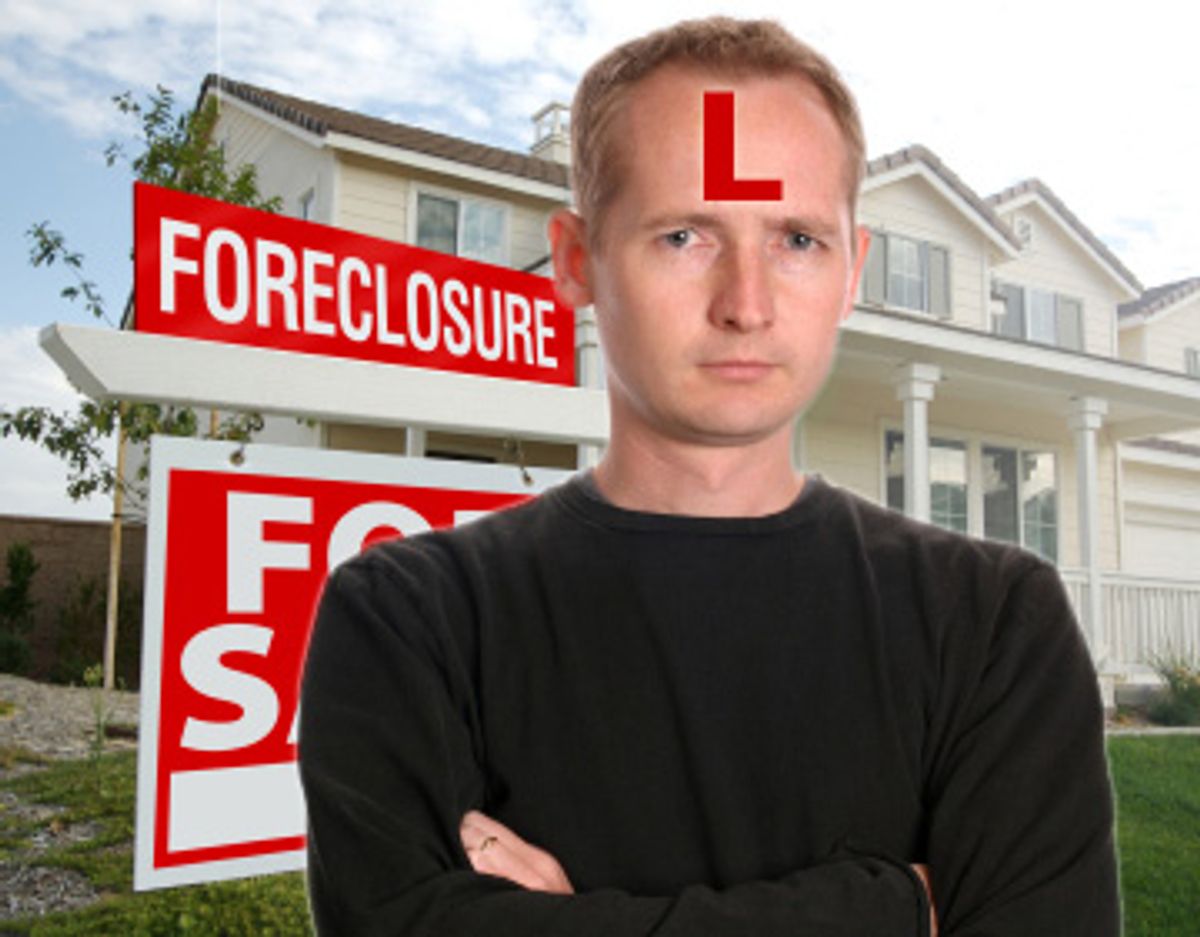 Shouting directly from the floor of the Chicago Mercantile Exchange, Santelli angrily asked why we should be "subsidizing the losers' mortgages."

"The government is promoting bad behavior," he screamed, while a few dozen traders gathered behind him cheered gleefully.

Set aside, if you can, the overwhelming oxymoronicity of stock and commodity traders complaining about government's relationship to bad behavior, just one month after the end of the presidency of George W. Bush. There's little doubt that Santelli was channeling the rage of a significant subset of Americans. Struggling with a mortgage you can't afford? It's your fault. You were irresponsible, or even worse, you were a greedy bastard who thought you were going to score big as housing values continued to appreciate. But you were wrong, and now you should pay the price. You should lose your home, go back to renting an apartment, and stop whining.

Santelli's critical perspective does not lack for support from more serious minds. In "Home Loans in the U.S: The Biggest Racket since Al Capone?," the congenitally caustic economist Willem Buiter, writing in the Financial Times, calls the plan "a tax on the prudent to subsidize the imprudent" that is "both inefficient and unfair." Megan McArdle, always a strong voice for libertarian-accented economy policy prescriptions, calls it "a massive transfer to borrowers from lenders and the rest of us" with "no penalty for having borrowed more than you could realistically afford to repay -- not so much as a speck of dirt on the credit report." George Mason University economist Tyler Cowen just doesn't believe we should be helping anyone whose mortgage payments equal 43 percent of their gross income -- he calls government attempts to force that percentage down "a significant move away from the idea of commercial decisions based on contract."

Buiter, incidentally, delivers a pretty good read that makes some excellent points on how U.S. housing policy is fundamentally cockeyed, but ends up advocating a position that I think will find little political support in the United States. He believes that the foreclosure process is too expensive for lenders, and therefore recommends "simplifying the procedures for foreclosure to reduce their cost."

Increasing creditor rights, limiting the grounds for appeals by the borrower and other measures speeding up the foreclosure process would make mortgage lending a more profitable and attractive activity, and would also make lenders willing to consider application by more risky borrowers.

It might be useful at this point to look at some actual numbers on foreclosures, provided by Mike Lillis in the Washington Independent this morning, in an article that would likely leave Santelli writhing in an epileptic frenzy on the floor, "Housing Groups Fear Obama Plan Falls Short."

Foreclosures nationwide topped 2.3 million last year, up 81 percent from 2007 and 225 percent from 2006, according to RealtyTrac, an online foreclosure database. In December, Credit Suisse estimated that, without government intervention, more than 8 million families could lose their homes to foreclosure by the end of 2012.

I do not know of any good data that can tell us what percentage of those 8 million families fall into the class of irresponsible greedy losers. This is, after all, the United States of America, where, until very recently, greed was considered the grease that kept the cogs of capitalism moving smoothly. So I suppose it is possible that everyone underwater on their mortgage is a jerk. But I'd also guess that some significant fraction of that number includes people who scrimped and saved and perhaps unwisely took advantage of the new mortgage products offered by lenders to get into a home in a market where everything was over-priced. And their lives now fall under the category of economic collapse collateral damage.

But whether or not everyone who gets a foreclosure notice in the mail is a reprehensible grasper at the ultra-good life or not, 8 million is still a big number. It represents immense hardship, and a huge, increasing drag on economic growth. Simon Johnson, the former IMF chief economist who has recently, and rapidly, become a hugely influential voice in the econoblogosphere, spells out the rationale for attempting to reduce that number succinctly, in an article in today's The New Republic.

...It's important to know that there is a clear case to be made for using taxpayer money to reduce the number of foreclosures and help homeowners refinance their mortgages. On the negative side, foreclosures destroy economic value in several ways: transaction costs of foreclosure itself; reduced value of foreclosed houses and impact on houses in the neighborhood; reduced property taxes for local governments; and increased crime due to vacant houses. The death spiral of foreclosure-forced sales, falling house prices, and further foreclosures needs to be broken.

Johnson, like the housing groups in Mike Lillis' article, believes that the chief problem with Obama's housing plan is that it is not bold or aggressive enough to break the "death spiral." Which just goes to prove that you cannot satisfy everyone, no matter how inclusive you aim to be.

But there's another reason to support an effort to reduce foreclosures that doesn't simplify to a strictly economic, cost/benefit analysis.

Maybe it's worth remembering the vision of America that Barack Obama spelled out in his speech at the 2004 Democratic Convention:

"That's the promise of America -- the idea that we are responsible for ourselves, but that we also rise or fall as one nation; the fundamental belief that I am my brother's keeper; I am my sister's keeper.

The Michelle Malkin prescription: "suck it up" and let the weak bleed to death on a pile of their own foreclosure notices was rejected by voters in 2008. Just because someone is a "loser" doesn't mean that we shouldn't feel an obligation or responsibility to help them out. We are better than that.