How to get rid of Roland Burris 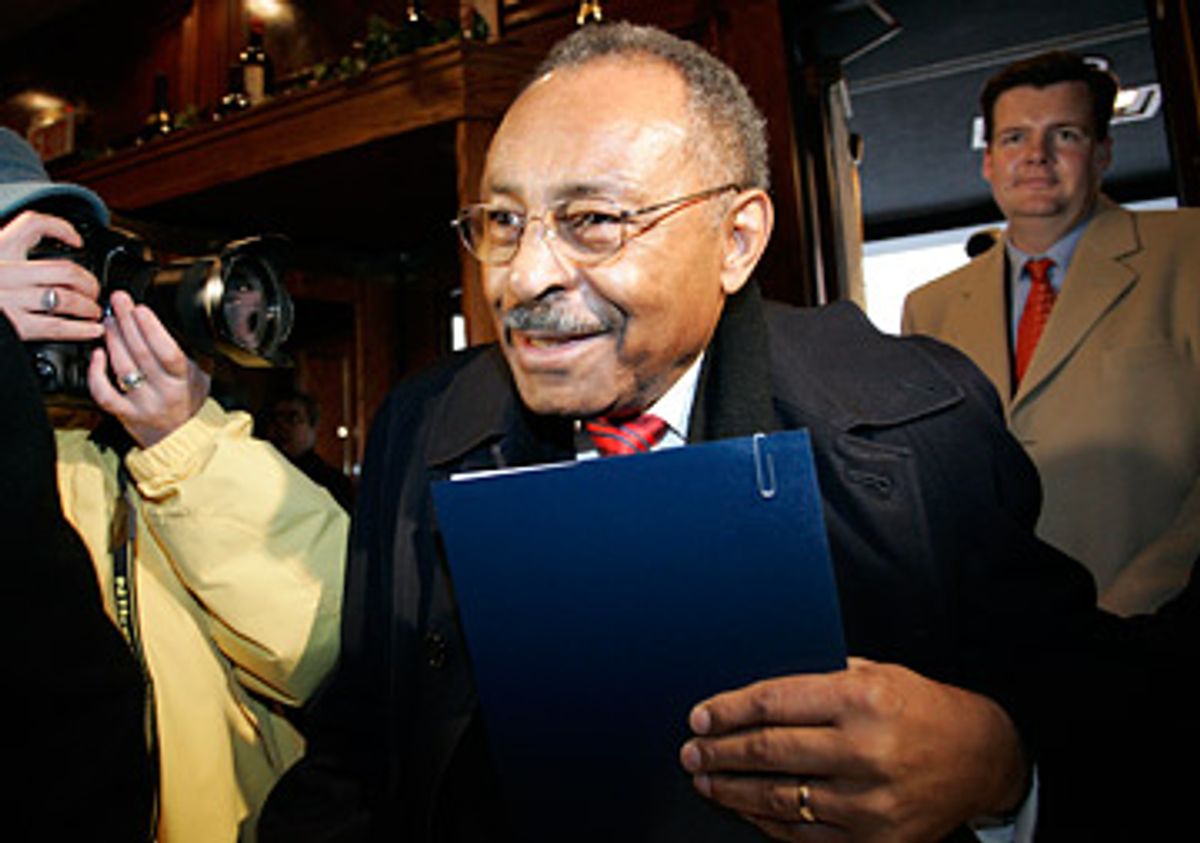 Rod Blagojevich is gone -- but his legacy is tainting both the Illinois political system and, now, the United States Senate. The prospect is for a miserable, drawn-out inquiry into the deceptions of Blago's Senate appointee, Roland Burris. On Wednesday morning, both the Washington Post and Burris' hometown Chicago Tribune called for Burris' resignation, the Tribune noting that the new senator had now offered four different versions of how he came by his seat. Just hours later, Burris spoke at a City Club of Chicago luncheon and said, "I've done nothing wrong and I have absolutely nothing to hide." The likelihood that this ambitious rogue will fold his cards seems slim.

The ambiguities of the United States Constitution, however, offer the Illinois state Legislature an opening to short-circuit this dreary ritual. The Legislature should call a special election in the next few weeks to fill Burris' seat, and offer the voters a chance to weigh in on the artful evasions of their new unelected senator. It would be the constitutional equivalent of a Hail Mary pass, but desperate times call for desperate measures.

Federal wiretaps quote the colorful ex-Gov. Blagojevich as saying, among other things, that the Senate seat "is a f--king valuable thing, you just don't give it away for nothing." Yet a few weeks after his arrest, he asked us to take on faith that he had done exactly that. He appointed Roland Burris, a former Illinois attorney general, to the seat, and insisted that Burris is "an individual who has unquestioned integrity ... a good and decent man." Burris vouched for himself as well, assuring the public that "I have no relationship" with the pervasive corruption alleged against his patron. Senate leaders, having promised not to seat any senator appointed by Blago, meekly seated Burris on Jan. 13.

But the "no relationship" statement is now inoperative. In testimony given to the Illinois Legislature during Blago's impeachment, Burris recalled only one discussion about the seat, with a member of the governor's staff. In the past few days, his memory has improved, and he now recalls that he spoke with, well, five Blagojevich associates, including the governor's brother, and that the subject of campaign contributions did come up. Tuesday he admitted agreeing to raise funds for Blagojevich during those talks. Still, he insists, he has done nothing wrong, and he faults the media for making a big deal of such a small memory lapse.

God alone knows how many other shoes will drop over the next six months, as Illinois prosecutors ponder whether to indict their new senator for perjury, and Senate leaders mull the prospect of an inquiry by the Senate ethics committee. The presence of Blago's protégée on the national scene is both an embarrassment and a distraction. Can nothing be done to bring this tawdry saga to a quicker end?

One possible answer lies in the text of the 17th Amendment, adopted in 1913, which provides for the election of senators by the people. Under the original Constitution, senators were named by the legislatures; the governors had the power to appoint senators if a vacancy occurred while the legislature was not in session. As Edward Zelinsky of Cardozo Law School wrote recently, many legislatures met infrequently. "A temporary gubernatorial appointment was a sensible way to reduce this gap in senatorial representation until the legislature met to elect a new U.S. Senator."

What the 17th Amendment now says is that "the legislature of any State may empower the executive thereof to make temporary appointments until the people fill the vacancies by election as the legislature may direct." In fact, four states currently by statute bar the governor from making any temporary appointments; eight others permit appointees to serve only until a special election can be held. The rest permit the governor to appoint a senator to serve until the next general election.

Illinois is such a state. Its statute currently provides that "the Governor shall make temporary appointment to fill such vacancy until the next election of representatives in Congress." When the Blagojevich scandal broke, the Legislature considered stripping the governor of appointing authority, but punted -- in part, one suspects, because Democrats wanted to keep the prerogative of appointment for Blago's successor. That was the wrong call. Arguably, the Legislature could go back and undo the mistake it made by passing a statute tomorrow calling for a special election to be held on, say, Tuesday, April 7.

Would this be constitutional? The amendment says that a gubernatorial appointee shall serve at most "until the people fill the vacancies by election as the legislature may direct." The Legislature at first directed that an appointee's term should run until January 2011; but there is nothing in the text to suggest that it couldn't change its mind, even after the fact. In fact, the words "may direct" directly echo language in Article II of the Constitution that provides that presidential electors shall be appointed "as the legislature ... may direct." Defenders of the Court's decision in Bush v. Gore argued that this language meant that the Florida Legislature had sole authority for deciding how to award the state's electors, a responsibility that did not arise from or depend on state law and could not be limited by the state courts. The same argument would suggest that the Illinois Legislature could delegate its authority to the governor under the 17th Amendment -- but that no state statute could divest it of its continuing responsibility to determine when "the people [shall] fill the vacancy," even if that means taking back its initial delegation.

This argument is not a slam dunk. Burris could rush into state and federal court and argue that he has a vested right to his seat. There's no case law I can find on this, and one can make a good argument that a court should abstain from such a case as a "political question." But the choice would be Burris': If, as he insists, he is a public servant of spotless rectitude, wouldn't it be better to put the question to the people and let them reaffirm or reject his appointment?

One objection to this procedure would be that it would permit a back-door recall of appointed senators. The Illinois Legislature could spike that argument by doing what it should have done in December -- permanently taking the governor's appointment power away. Replacement senators in Illinois would henceforth be chosen by the people, and like all elected senators, not subject to recall by anyone.

Nowhere else in the United States political system is a powerful office the property of one official, to be awarded without any check to another. Judges, Cabinet officers, ambassadors -- all must be confirmed by the Senate. Members of the House take office only after a special election. Giving the Rod Blagojeviches of the world the power to create senators in their own image is an open scandal.

In the weeks since the 2008 election, we have seen the disadvantages of appointed senators on display. Illinois we know about. In New York, the governor flirted with naming an amiable celebrity who could probably not have been elected in a fair contest. And in Delaware, the governor named an able chair-warmer whose mission seems to be to prevent anyone from earning the seat before Vice President Biden's son Beau can run for it.

To hell with all of that. The people of every state deserve a real choice and a real senator at all times.

As a nation, we made the choice for popular election of senators in 1913. We as a people should carry through the logic of the amendment by getting rid of gubernatorial appointment. Sen. Russ Feingold has proposed a constitutional amendment to fix the anomaly in the amendment; but we needn't wait for the tortuous amendment process. Every state can fix this glitch by statute, and Illinois should be the first.