The pizza restaurant is the last bastion of American small business. Eat a slice today to jump-start our economy. It's your civic duty! 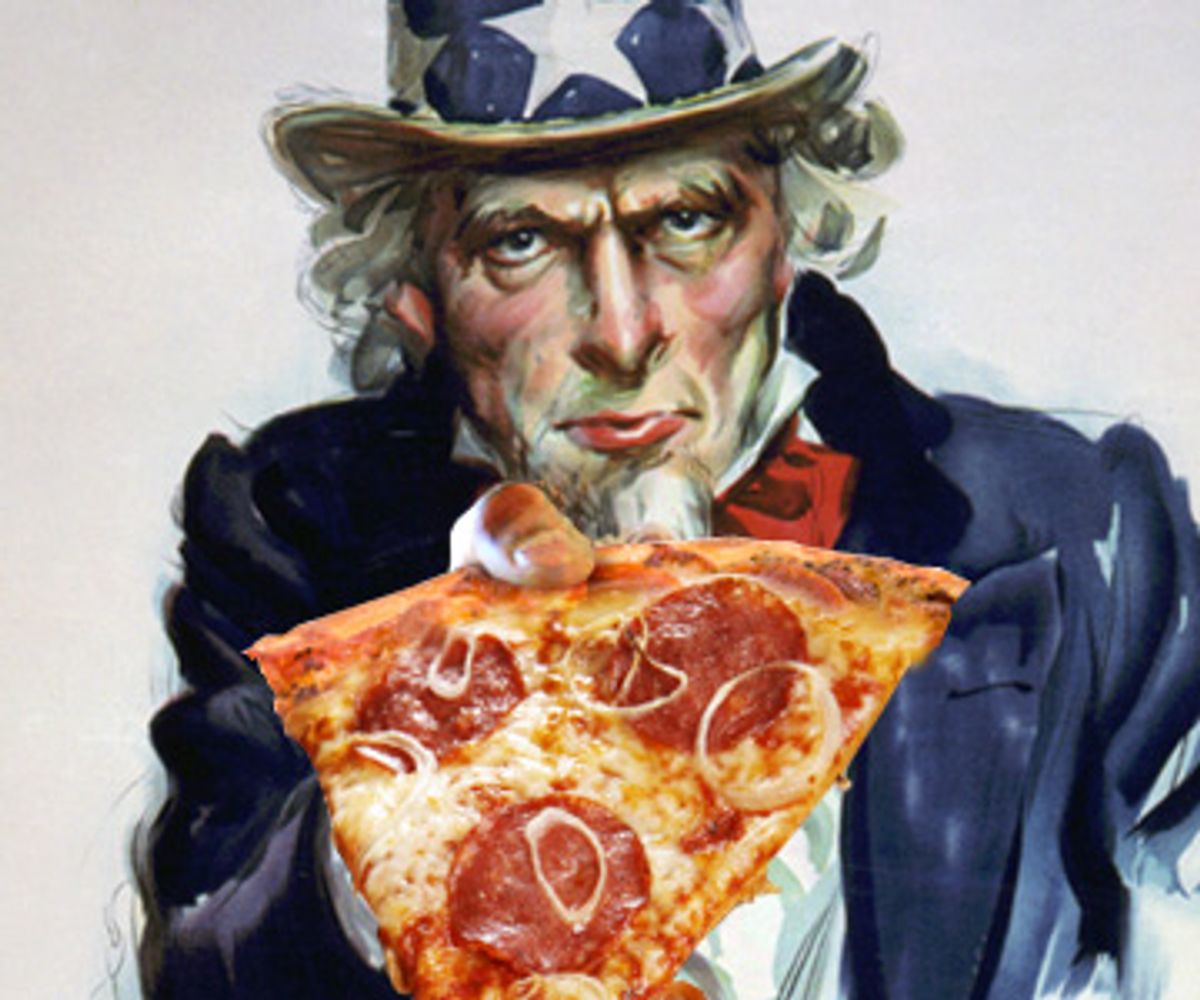 Long after Home Depot has dumpstered its last roll of Tyvek, frayed and unfurling like a forgotten flag; long after Target has baled its remaining Isaac Mizrahi couture collection sweaters for shipment to AAA Closeout Liquidators; long after Walgreens, the Pharmacy America Trusts, has filled its final myeasyconsult.com Vicodin prescription for your neighbor’s 14-year-old son, one business will still be switching on its O-P-E-N sign every day at 9 and off again at 11: Tony’s Pizza.

As will Armando’s Pizza, Enosburg House of Pizza, Flying Pie Pizzeria, Hoss’s Pizza, Koronet (all hail the slab!), Munchies Pizza & Subs, Pizza by Napoli, Scroungymoose Pizza, Zorbas Pizza and whatever the name of the nearest place that suctions you in the door with furnace blasts of yeast and char, the ineffable herb/caramel duality of tomato sauce and the wanton surrender of melting cheese.

The titans -- national hawkers of furniture, shoes, clothing, computers, auto parts, electronics, jewelry and embarrassingly themed steakhouses -- are toppling, fatally bloated by mergers, acquisitions, leveraged buyouts and roll-ups. But amid the colossal corpses strewn on the corporate battlefield, a ragtag army of small businesses soldiers on: the pizza industry, 76,355 restaurants strong across America.

In some places, they are sprinkled (Wyoming: 127; Hawaii: 178; and North Dakota: 198). In others, they are poured (California: 6,789; New York: 6,117; and Pennsylvania: 5,052). Wherever they are, they’re owned by your Uncle Tony, the dude from high school who didn’t make the Winston-Salem Warthogs or Zafar, Rabah and Abdul-Qahhar FOB from Tunis. In the pizza industry, the little guy still prevails. Big chains -- Pizza Hut, Domino's, Papa John's and a few more -- account for only a third of restaurants, a percentage that's been slipping every year since 2000.

It’s not for lack of trying. The annals of pizza industry consolidation are studded with almosts. Take Donatos, an Ohio company specializing in a grotesquerie of toppings.  ("Over 100 pepperoni on every large pizza!") In 1999, McDonald’s bought the chain for $150 million, added a thick-crust option to the menu and launched an assault on the pizza mother lode, the Northeast corridor. First offensive: five new restaurants in Philly, on the theory that the pizza that won over the City of Brotherly Love, capital of the pizza-lovingest state (4.06 stores per 10,000 residents), could make it anywhere. Didn't happen. Instead, in 2003, Micky D's sold  Donatos back to its founder, James Grote, for $50 million and wrote off a $237 million loss. Rued Grote in the trade mag Chain Leader, "Our traditional crust was thin."

Pizza thumbs its nose at going national. For starters, regional preferences are more partisan than red state-blue state during the Dubya dark ages. The Northeast is dominated by the New York type -- thin, zesty and riddled with hot air. The Midwest is surprisingly extremist. On one hand, you have the "more is better" doctrine, which reaches its apogee in the deep-dish style and the 2,310-calorie individual "Chicago Classic" served at Pizzeria Uno’s. On the other, you've got the prototypical maiden aunt: flaky, flatter than Kansas and aggressively sweet. California style is all about surfaces. Look for the slap-happy mixing of the latest food trends: goji and black quinoa or thousand-year egg, single-origin chocolate and bhut jolokias. (The South, hobbled by an early-20th-century Italian shortage, has no native style.) But this diversity is a diversion; the secret to pizza’s conglomerate-fighting chops lies elsewhere.

In the crust. Because no matter how state-of-the-art your mixers, sheeters, presses and ovens; no matter how to-spec your supplier delivers the frozen shells; no matter how much you "relax" your dough with L-cysteine, glutathione, protease enzyme and sodium bisulfite, if you aren't mixing, proofing and stretching on site and by hand, your pie is doomed. It may be doughy. Or tough. Floppy. Or brittle. But it won’t have the airy texture, tender crumb and crisp edges of the stuff produced by the undercapitalized, low-tech operators otherwise known as mom 'n' pops. Over 80 percent of independents make their own dough and almost 55 percent hand-shape their crusts, according to the 2007 Pizza Industry Census. Which is why the pizza parlor, like the bakery of yore, is the true heart of our neighborhoods. Where else can Joe and Jenny Six-pack go to be exalted by the primal smell of baking bread?

The average pizzeria employs an entire family tree -- almost 70 percent have more than 10 employees -- and is forgiving of those who might have dozed through algebra I, algebra II, world history and intro to programming. There's the counterperson (Prerequisites: "a positive, friendly attitude" and "good cash-handling skills." Your little sister Lara?). "What’ll it be?" "A slice." "Two dollars, please." Behind her, the kitchen staff ("Fun to work with! Current food handler’s license!" Maybe cousins Ted and Wheezie?) mixes, kneads, forms and tosses. The twirling skin whizzes back and forth, almost grazing the fluorescent lights. In the background, the owner ("Leadership and management skills are paramount" -- definitely Uncle Tony) and the delivery boy ("No more than two moving violations in the past 36 months" -- that would be you!) argue. The owner throws up his hands; the delivery boy walks out. The owner’s wife ("Motivated self-starter," "Ability to remain levelheaded") bustles over. She throws up her hands. The delivery boy walks back in. The counterperson slides your slice onto a paper plate. Heaven.

So buck up, America! Our free-market fire may have flamed out. But underneath the melted Olefin two-ply, the singed vinyl ceiling tiles and the blackened chunks of cement, an ember still glows: Tony's. Have another slice. Order another pie. If we double our annual pizza intake, the industry's spending on goods, services and wages -- and that of its suppliers -- balloons to $172 billion, based on a restaurant industry multiplier. That's over 150 times the $1 billion in spending on small business provided by the Obama stimulus plan. Blow, baby, blow!