Rush Limbaugh is the leader of the Republican Party

The conservative radio host loves to talk about himself -- and the GOP base loves to listen, as the rapt throng at CPAC Saturday proved. That makes party bosses nervous. 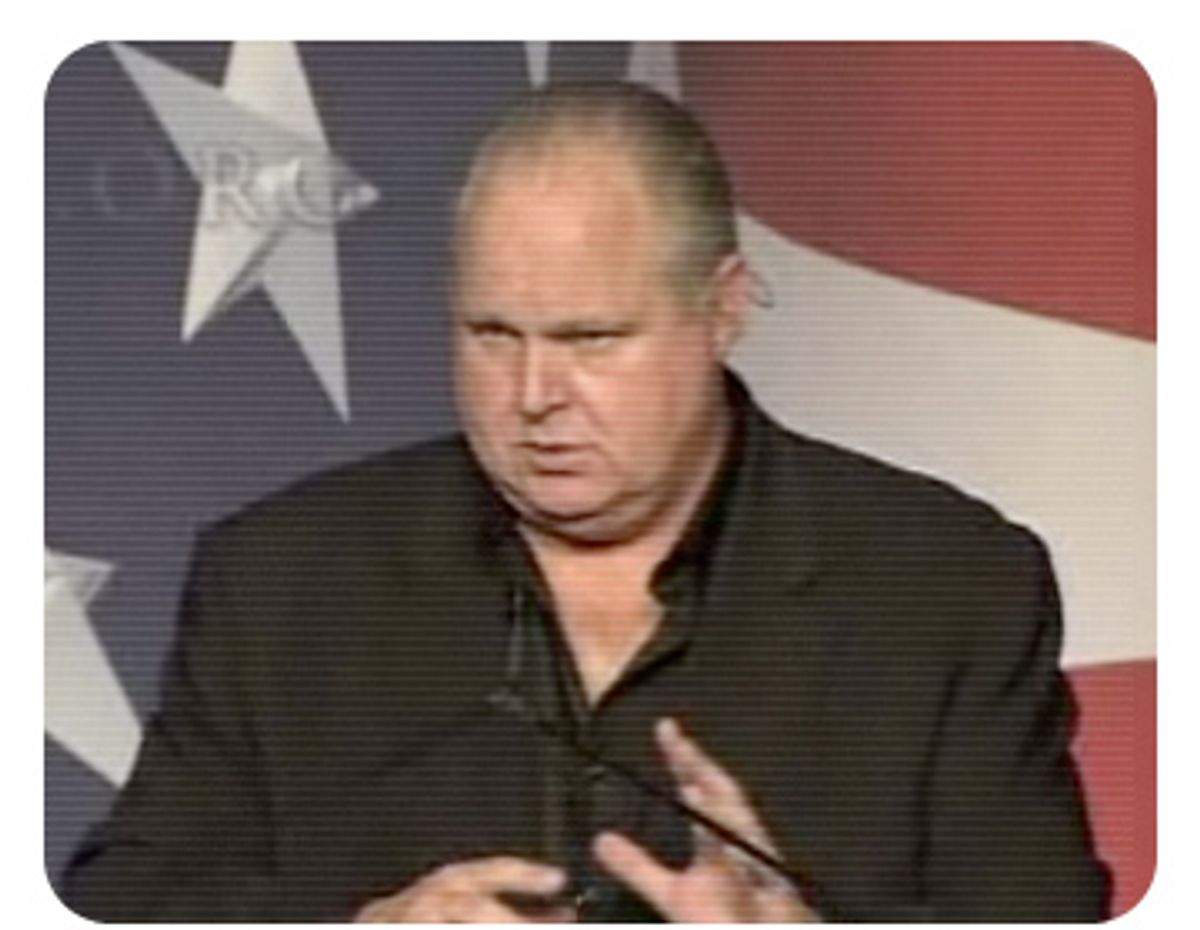 Seizing the opportunity to speak to a national TV audience, conservative radio talk show host Rush Limbaugh told a packed house of cheering supporters at the 2009 Conservative Political Action Committee's annual meeting in Washington to resist President Barack Obama's plans to expand government and not "think like a minority."

As Fox, CNN and C-SPAN carried his speech live and commercial-free, Limbaugh closed CPAC's 37th national convention by rallying conservatives still smarting from the Democrats' 2008 sweep of all branches of the national government and expanded electoral reign in the states.

Limbaugh exhorted conservatives to stay upbeat, blasted the alleged socialist agenda of the "Democrat Party," and called out the new president, the one he hopes will fail. "President Obama: Your agenda is not new, it's not change, and it's not hope," Limbaugh thundered, to wild applause in the Omni Shoreham's packed Regency Ballroom, as overflow crowds in three of the hotel's other convention rooms watched by live feed. "Spending a nation into generational debt is not an act of compassion." Conservatism itself, preached Limbaugh, was the sole bulwark against the frightening possibility of Obama destroying the country and the Republican Party. "[Conservatism] is what it is and has been forever," he said. "It is not something you can bend or shape."

But strip away the platitudes and cheap applause lines about freedom, self-reliance and the virtues of capitalism, and you're left with the subject that really interests Rush Limbaugh: himself. The conservative talker with the self-professed "talent on loan from God" spoke incessantly in the first person: there were more "I's" in his CPAC address than in an Idaho potato field. One clear message emerged from the speech:

And it's a message that makes some of the nominal leaders of the Republican Party uncomfortable.

The reliably self-aggrandizing Limbaugh referred about nine times during his speech to it being his first ever live televised national address. While that ignores the four years during the 1990s when he had a syndicated television program, taped live before a studio audience (and produced by Roger Ailes), it does underscore his relative importance to what remains of the national Republican Party. He spoke on the heels of a CPAC poll that revealed no clear choice among attendees for a 2012 GOP nominee, at the end of a week in which new Republican National Committee head Michael Steele kept finding fresh ways to make America cringe, and in which Louisiana's Bobby Jindal went from Next Big GOP Thing to punch line. Republicans, and some enablers in the media, have complained that "the left" wants to make Rush Limbaugh and Sarah Palin the de facto heads of the Republican Party, but, in fact, it seems to be the right's beloved free market that is doing that. The other contenders have failed -- including the ones for whom Rush Limbaugh admits he used to carry water, and those, like Jindal, for whom he still does. The Republican base votes for Palin in polls like this one, and as his radio ratings and the massive crowd at CPAC demonstrate, for Limbaugh with their ears, feet, hands and voices.

Moments before bringing Limbaugh to the CPAC stage, American Conservative Union president David Keene had gleefully reported a record attendance of 8,500, noting that when Reagan spoke at the first CPAC conference in 1973 only 125 people attended. Keene said the conference, which has steadily moved to larger venues over nearly four decades, had now outgrown the Shoreham and will move to "bigger quarters next year." In a statement that harkened back to Bill Clinton's defiant claims of relevancy in the wake of the Republicans' 1994 electoral victories, Keene assured the audience that "We're here, we're alive, and we're interested in ideas."

Slated for 30 minutes, Limbaugh spoke for more than an hour. His address started out quite strong, interrupted regularly for throaty ovations. In an early, not-so-subtle dig at the president and what he cheekily refers to as the "drive-by media," Limbaugh clarified for anyone wondering that he doesn't need a teleprompter to deliver a speech. He acknowledged Obama's persuasive powers, and even said the Democratic president had the "power to destroy" the Republican Party were he to use his communication skills to inspire Americans. (Apparently, Limbaugh watched a different national election, transition and opening month of the Obama administration, given that three-quarters of the country currently approves of the new president's performance.)

But Limbaugh limped through the final half-hour, rambling and repeating points he had already covered. He may not have needed a teleprompter, but by the end of the speech what he most needed was the hook. And despite buzz in some quarters about a possible Limbaugh bid for the presidency in 2012, if he truly had electoral ambitions, he would speak more often in the second person or first person plural, rather than solely about himself.

In his only mention of the 2012 race, Limbaugh assured his audience that a conservative comeback was not as difficult as some might fear. "All we need is to nominate the right [presidential] candidate," he said. As delivered, his comment was clearly not intended to hint at any potential candidacy of his own, but rather to reinforce his belief that said nominee must be a true conservative, unlike, in his view, 2008 Republican presidential candidate John McCain.

The most-listened-to radio host in America also relished taking some rather thinly veiled potshots at other conservative commentators, specifically those invited by President-elect Obama to a private dinner hosted by Washington Post columnist George Will one week before Obama's inauguration. Because Limbaugh was not on the air that day -- by sheer coincidence he was in Washington that same morning to meet with then-President Bush, whom "Rushbo" mentioned just once in his address Saturday, and then only to describe how the departing president gave the conservative talker a microphone-shaped chocolate cake and sang happy birthday to him -- reporters speculating that Limbaugh might actually be in town for the Will dinner were e-mailing and calling him all day. "I ended up getting more attention than any of them and I wasn't even invited to the dinner," clucked Limbaugh.

Those in the GOP who worry about Limbaugh's outsize influence, and about the tightening grip the conservative elements he represents have on the Republican Party, fear that Limbaugh will become the face of a party that's now lacking in leaders of national stature. (AFSCME and Americans United for Change recently capitalized on this fear with a TV commercial depicting Limbaugh as the person congressional Republicans follow.) But the fear is a bit belated. Limbaugh is no newcomer to national politics. He was named an honorary member of the House Republican Caucus after the GOP's 1994 takeover of Congress. Last year, he signed a new $400 million contract to continue his radio show, which is heard by as many as 20 million listeners per week on 600-plus stations, through 2016. While talk radio has declined as political junkies move online, Limbaugh has managed to retain his audience. And those Republican pols who cross Limbaugh publicly  may have to make abject and equally public apologies.

Meanwhile, Limbaugh has become more important simply by surviving. When the Democrats last controlled the White House and both chambers of Congress, during Bill Clinton's first two years in office, there were other conservative stars competing for the limelight, and more waiting in the wings. Newt Gingrich was the speaker of the House. George Bush had just been elected governor of Texas. This year at CPAC, despite appearances by the likes of Ward Connerly, Ann Coulter, Phyllis Schlafly and Karl Rove, Limbaugh was clearly the superstar draw. As the movement searches for a front-and-center spokesman to provide inspiration and direction, Limbaugh's refusal to tilt toward the center may place him out front in a Republican Party already suffering from a disappearing moderate wing.

At CPAC, I asked Gavin Valle, a 42-year-old strategic healthcare consultant from New Jersey, what he thought about those who have worried aloud that having Rush Limbaugh taking a too prominent or public role might hurt the Republican Party. "Rush is the heart and soul of the conservative movement. He's always a conservative first and a Republican second, and he lets people know that," said Valle, whose jacket was adorned with "Nixon's the One" and "Reagan for Governor" commemorative buttons. I asked Valle what he thought of moderate Republicans and other party leaders in Washington who think Limbaugh wields too much influence. "As far as people on the Hill criticizing him? Frankly, there's a lot of people on the Hill who are Republicans first and conservative second or not at all."

And not everybody who loves Rush is part of the aging angry white male cohort that is no longer sufficient to win an election. CPAC attendee Chelsea Barnett, a 21-year-old student at the University of Central Oklahoma who says she's been listening to Limbaugh since she started driving, was inspired by Limbaugh's address. "Omigosh, I think he energized the base so much," said Barnett, who at one point ecstatically shouted, "Are you single?!" toward the stage. "I think everybody's asking themselves, 'Where in the world has this guy been and why have we not heard from him face-to-face?' He's so effective in person in energizing people. It was so amazing. I think we're going to see a lot more from him in person."