Some Iraq war critics are fretting about Obama's speech on Friday, and his plan to stay a little longer. But here's why there's no reason for alarm. 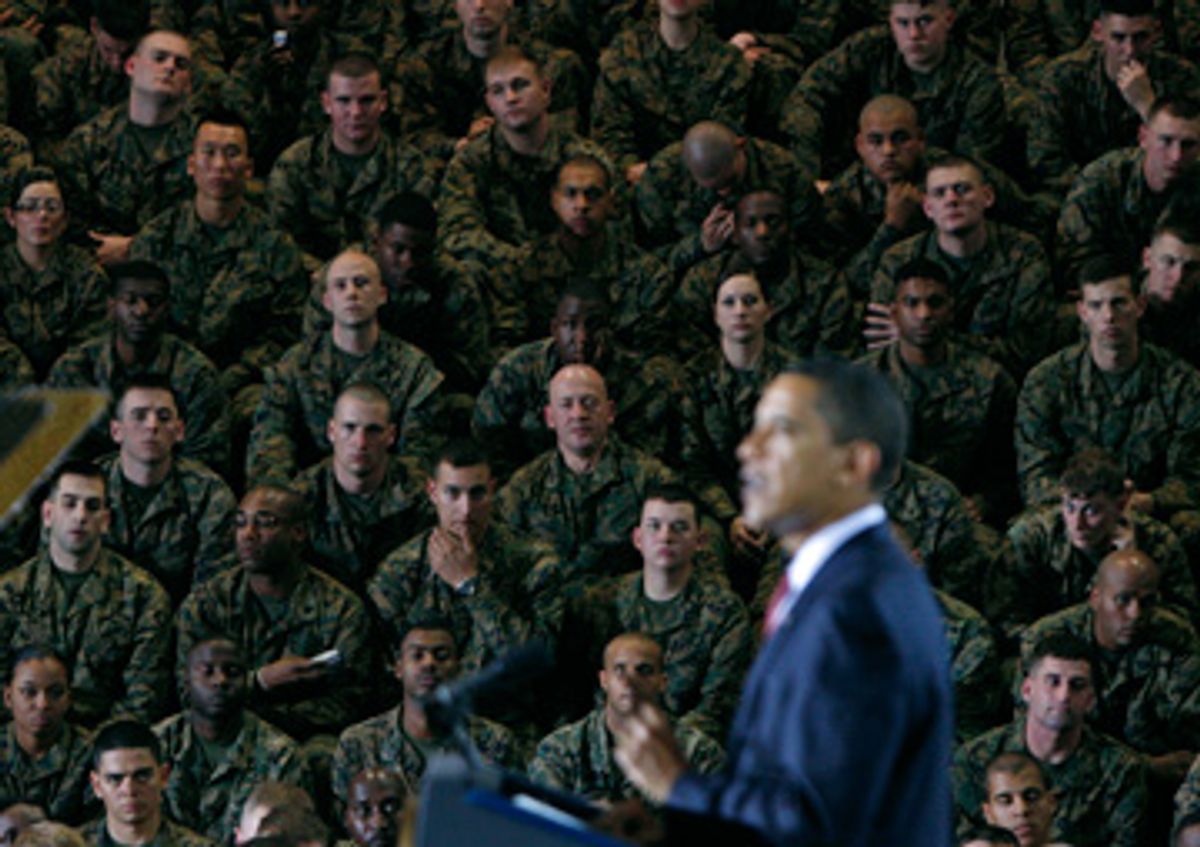 On Friday, nearly six years after George W. Bush's swaggering "Mission Accomplished" speech, a new and humbler president addressed a cheering military audience and declared an end to the Iraq War. But some observers fear that President Barack Obama's blueprint, which extends the American presence for another quarter-decade, raises the possibility of a continued U.S. entanglement in that war.

In particular, Obama's plan to leave 35,000 to 50,000 support troops in Iraq between August 31, 2010 and December 31, 2011,  has made the left of his party as nervous as a vegan in a butcher shop. Congressional leaders like Speaker of the House Nancy Pelosi have urged that the number be reduced to 15,000. One can only imagine that the Democratic Party leadership wants to campaign for congress in fall 2010 on having ended the Iraq War, and retaining 50,000 troops there would make that difficult. So has Obama been reduced to "Bush Lite" on the Tigris? In his first detailed policy speech on Iraq, did he renege on his commitment to get out -- or did he skillfully calibrate his plan to avoid any of the booby traps Mesopotamia might still hold for an American president?

Obama cannot afford to make his calculations about Iraq solely with an eye to domestic American politics. He extended his original proposal of a 16-month withdrawal of active combat brigades to 18 months so as to leave more troops in place to help with the next Iraqi parliamentary elections, scheduled for December 2009. It is stil the case that Iraqi elections can only go forward if the country is locked down and vehicular traffic forbidden, preventing car-bombings and coordinated guerrilla strikes. It might be possible for the Iraqi military to provide security for national elections in 2013 should the country's future ruler or rulers deign to hold them, but the Iraqi military cannot hope to do so this year.

Iraq's military also continues to need logistical support from U.S. forces. Australian commander John Snell warned Agence France Presse, the French news service, of supply chain problems: "If we were leaving today, [the Iraqi army] will be able to defend itself but it would rapidly disintegrate." Iraqi national security director Muwaffaq al-Rubaie listed for AFP other realms in which the new Iraqi army cannot stand alone: "[S]urveillance of frontiers, the air force, the navy, sophisticated counter-terrorism weapons, and we need to make serious progress in intelligence matters." An Iraqi military that altogether collapses, as Snell foresees, would prove a disaster for Obama and might well necessitate a return of U.S. forces to Iraq.

Although Prime Minister Nuri al-Maliki has had military successes during the past year, in the southern port of Basra and in Sadr City (east Baghdad), against the Mahdi Army militia, these campaigns depended heavily on U.S. close air support. Iraq lacks an air force and it will take years to create one. One caveat about Obama's pledge to remove troops by the end of 2011 is that he cannot possibly be including the U.S. Air Force, which is almost certainly in for a longer mission, but can operate from bases outside Iraq. Without a navy, moreover, Iraq cannot prevent petroleum smuggling via the Persian Gulf, which drains billions from government coffers annually and strengthens militias against the state, and this sort of patrol will fall to the U.S. Navy for some time to come.

Some Republicans claimed that Obama's plan vindicated their Iraq policies, which is sort of like claiming that Captain Sullenberger's water landing in the Hudson vindicated the geese that knocked out the jet engines. That side of the aisle, moreover, has consistently hyped the wrong threats. John McCain, like an Arizonan Cassandra, harped on the small terrorist movement that styled itself "al-Qaida in Mesopotamia," and predicted that "If we leave Iraq there will be chaos, there will be genocide, and they will follow us home." Obama's compromise decisively rejects McCain-style fear-mongering and his quixotic quest for long-term bases.

The new president forcefully rejected Bushian mission creep. Obama admitted, "We cannot rid Iraq of all who oppose America or sympathize with our adversaries. We cannot police Iraq's streets until they are completely safe, nor stay until Iraq's union is perfected." In other words, he is prepared to depart Iraq even if it remains somewhat divided, even if a drumbeat of subdued violence continues in its cities, and even if anti-Americanism retains a certain purchase on the population.

It would be wrong to overlook these simple words: "And under the Status of Forces Agreement with the Iraqi government, I intend to remove all U.S. troops from Iraq by the end of 2011." Though the word "troops" referred to the Army and the Marines, not to the Air Force and Navy, what Obama said on Friday was a firm pledge to leave. And by binding himself to a security agreement formally passed by the Iraqi parliament, Obama was eschewing unilateralism and the patronizing hubris that marked Bush's discourse on Iraq. The Iraqi and Arab press understood this point immediately, and led their accounts of Obama's speech with that sentence about removing troops. Obama was not signaling any diffidence about ending the Iraq War before the end of his term. He was attempting to provide for an orderly withdrawal that will ensure that U.S. troops are not drawn back in by a subsequent security collapse.