Lust and the lactating mother

How I went from nursing my daughter to breast-feeding my date. 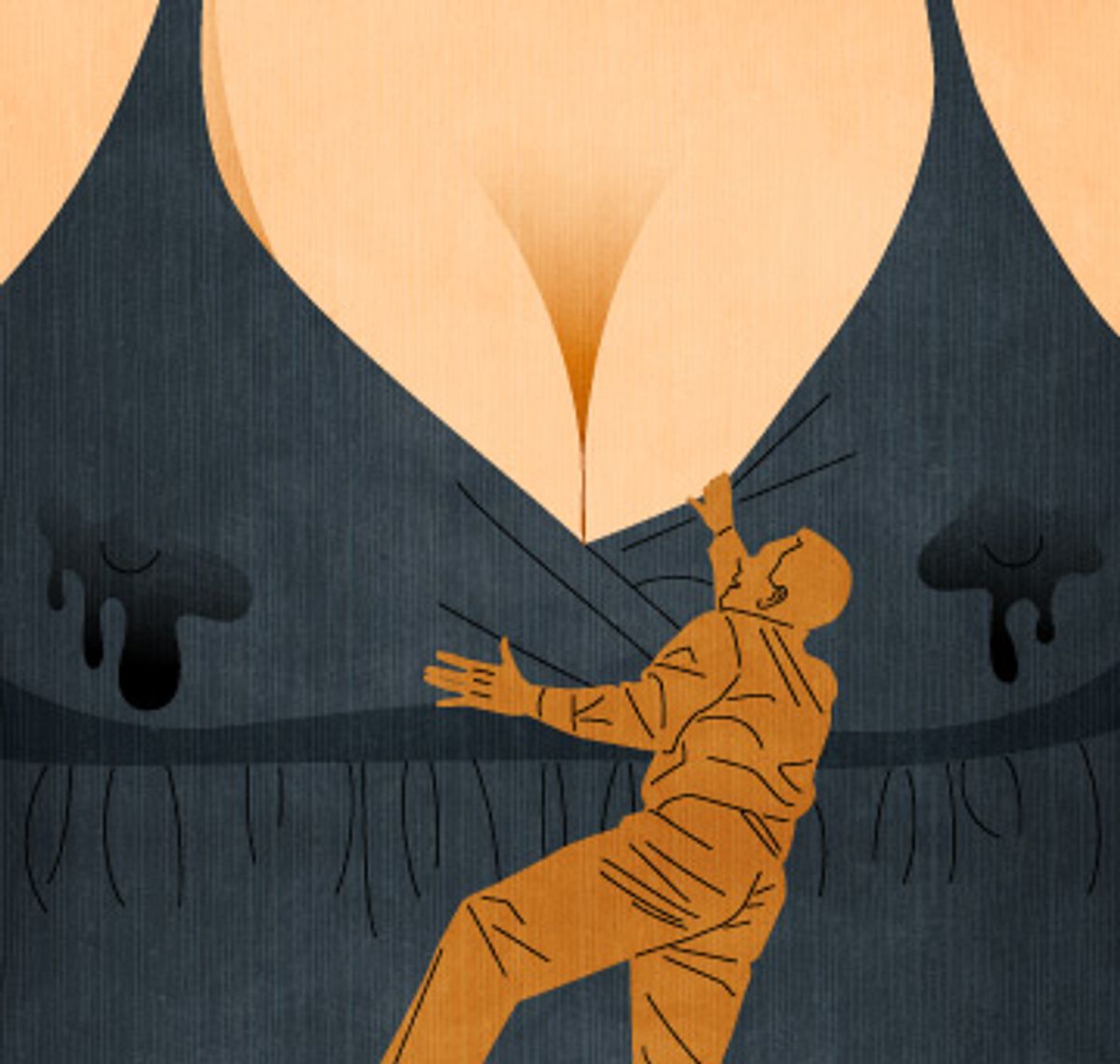 On Thanksgiving Day my boyfriend walked out the door. Our daughter was seven months old, and I'll never know for sure what put him over the edge. He was bipolar. He drank. He was fragile. He didn't leave a forwarding address.

This was a time when I believed that love would overcome anything. Well, it certainly overcame me. The very first thing I did, even before crying, was to sit down on the living room rug and nurse my daughter, M. Nursing was my landing pad. It was the place where my milk could turn my anger into white, warm calmness. Nursing had the same soothing effect on my baby, no matter how hungry, agitated, red-faced and cranky she was at the start. Nothing beat nursing.

No matter how alone I felt, those times that M. lay on my chest, her tiny hands kneading my breasts, milk flowing from me, I knew that I could do this alone. Not only did nursing nourish M., it nourished me. But it wasn't long after her father split town -- as M.'s first birthday approached without a sign from him, I knew he wasn't coming back -- that friends started to ask me, "When are you going to get back out there?"

As in date? They had to be kidding. Not only was I a 29-year-old single mom with dishes in the sink and baby clothes with stains I'd never actually scrub out, but I breastfed "on demand." How in the world could I even think about hooking up with some hot man when my cha-chas were making milk?

"But look at you!" my girlfriends (who were all married) said to me. "You’re attractive, and you're young."

Maybe they were right. About getting back out there, anyway. As the months passed, I started to notice men: our building manager -- who gave M. stuffed animals and called her "Little Guacamole" -- and the UPS man, who rolled his packages past me.

Still, noticing men in the hallway was not the same as dating them. I'm grateful that back then I did not sit down at my computer and type lactating and dating into Google. If I had, I never would have gone on a date. Because recently, while writing this essay, I turned to my computer to do some research, in hopes of finding a thoughtful example of what it means to balance these two acts. I hoped to come across a first-person essay in Redbook about a mother's deep feelings, something to inspire me as I worked.

One of the first things that came up, however, was a site called MilkMyTits.com. Men were looking for "mature women willing to breastfeed me."

Gross. I kept scrolling through the sites that Google brought up; there had to be something. But they were all the same: white men in their forties, in search of sweet breast milk. My breasts had always been one of the most sensual parts of me. Before motherhood, when a man put his lips around my nipple, it made my body rain -- not a light sprinkle, either. If I slept with a man as a nursing mom, my breasts would rain on him. Perhaps, after undressing, I could open my closet, pull out an umbrella, and hand it to him: "You might need this ..."

I couldn't remember if I'd slept with M.'s father in the weeks before he'd left for good. If I had, I didn't remember the details. He was shut down and hungover; I was absorbed with my baby. I lived in the world of womanhood for years, and now I was a mother. But who says that you can't live in both worlds? Some mothers I knew wore bras to bed because they didn't want to leak on the mattress -- or their husbands. That's how they divided their realms. But I wanted to be a woman who lived in both worlds; I wanted to be the kind of woman who didn't care if she spurted.

One of my best friends in New York City told me that she wanted to set me up on a blind date. Ironically, she was the same friend who, in 2002, was thrown out of the public library in Manhattan for breastfeeding her daughter. She'd been nursing in an empty reading room, when a female security guard screamed at her to "take that outside." The guard didn't know that my friend, Susan Light, was a lawyer who took it straight to the media, after which the library expressed "deep regret" over the incident and immediately sent a memo to remind staff of the right of women to breastfeed.

Little did my mother-friend know that the blind date she wanted to set me up with might have had a breastfeeding fetish. She told me that he was a lawyer, too, "a cute one." After chatting on the phone with the lawyer -- his call woke me as I fell asleep while nursing M. in the bed we share -- I decided to go for it. I've always considered myself to be open-minded about anything intimate. Maybe I was rebelling against my Catholic mother, but I certainly was not a prude. I decided that I'd keep the date short and sweet -- and I'd nurse before leaving so (I hoped) I wouldn't leak.

The following Friday, after enlisting another girlfriend to baby-sit, I dashed out the door to meet the lawyer at a bar. When I got inside, he waved. I didn't see the cuteness -- he had a receding hairline -- but maybe I was too nervous.

Still, he did the right thing: He asked if I had a photo of M., and when I pulled one from my wallet, he used the word adorable.

"You were nursing her?"

That's when I noticed the sparkle in his eyes. Maybe I'd misread? But no.

I waited for the punch line, but he was not joking. I've always had this untactful knack for blurting out details that shock people -- I do it without thinking. Why did I tell him that I was breastfeeding? Nursing was such an essential part of who I was, it was like telling someone, "The sitter was running late, I'm sorry --"

It's always after the fact when I realize I should be wearing a soft muzzle. The lawyer's enthusiasm was a sure giveaway that I'd said too much. I didn't know if I should crawl under the table or give him a high-five. Was I flattered or freaked out? Or a little of both?

But the truth was, if any possible romantic date of mine was squeamish about the fact that I was breastfeeding, I did need to know this up front. I mean, if I hadn't said anything, and then all of a sudden he looked down and noticed the wet spots on my blouse, that would have been interesting.

And that's exactly what happened.

If you've ever breastfed, you know that just thinking about nursing can, well, have certain consequences. My breasts were flooding with milk. I had no control over it, and when I looked down, there was a damp spot on my chest.

Maybe it was all in the name of discovery, but perhaps more important, I liked the fact that this man acknowledged who I was: a woman as well as a nursing mother. He could have overlooked that wet spot on my blouse. He could have glanced at his watch, embarrassed, and said, "I'd better get home."

At the time I wasn't interested in having him -- or anyone, for that matter -- as a companion. I was an unseasoned single mom who was trying to get over her ex. I was still trying to get a handle on raising my daughter solo. I wasn't ready for a relationship. But I did crave sex. And I was curious. I wanted to know what it felt like to have a man drink my milk.

Afterwards, when I told a couple of friends what had happened, they scrunched their noses up. "You let him do what?”

Much to the dismay of my girlfriend who was babysitting, I brought him home. As my daughter slept in the other room, I let him unbutton my blouse and run his mouth across the edge of my bra. I let him touch me. When I started to leak, he was ecstatic. He told me that he'd never tasted anything so sweet in his life. (Yes, I wondered if, maybe, his mother had never breastfed him.) But this is what mattered most: He wanted me as I was, and I didn’t have to hide any of it.

Rachel Sarah’s book "Single Mom Seeking: Playdates, Blind Dates and Other Dispatches from the Dating World" was published in 2007. Rachel is the single-mom columnist for LifetimeTV.com, and she has written for Family Circle, Pregnancy, Parenting, Literary Mama, BabyCenter.com and American Baby.