The death throes of my newspaper

Before the Rocky Mountain News expired Friday, management asked staffers like me to do some strange things to keep it alive. We kept doing journalism anyway. 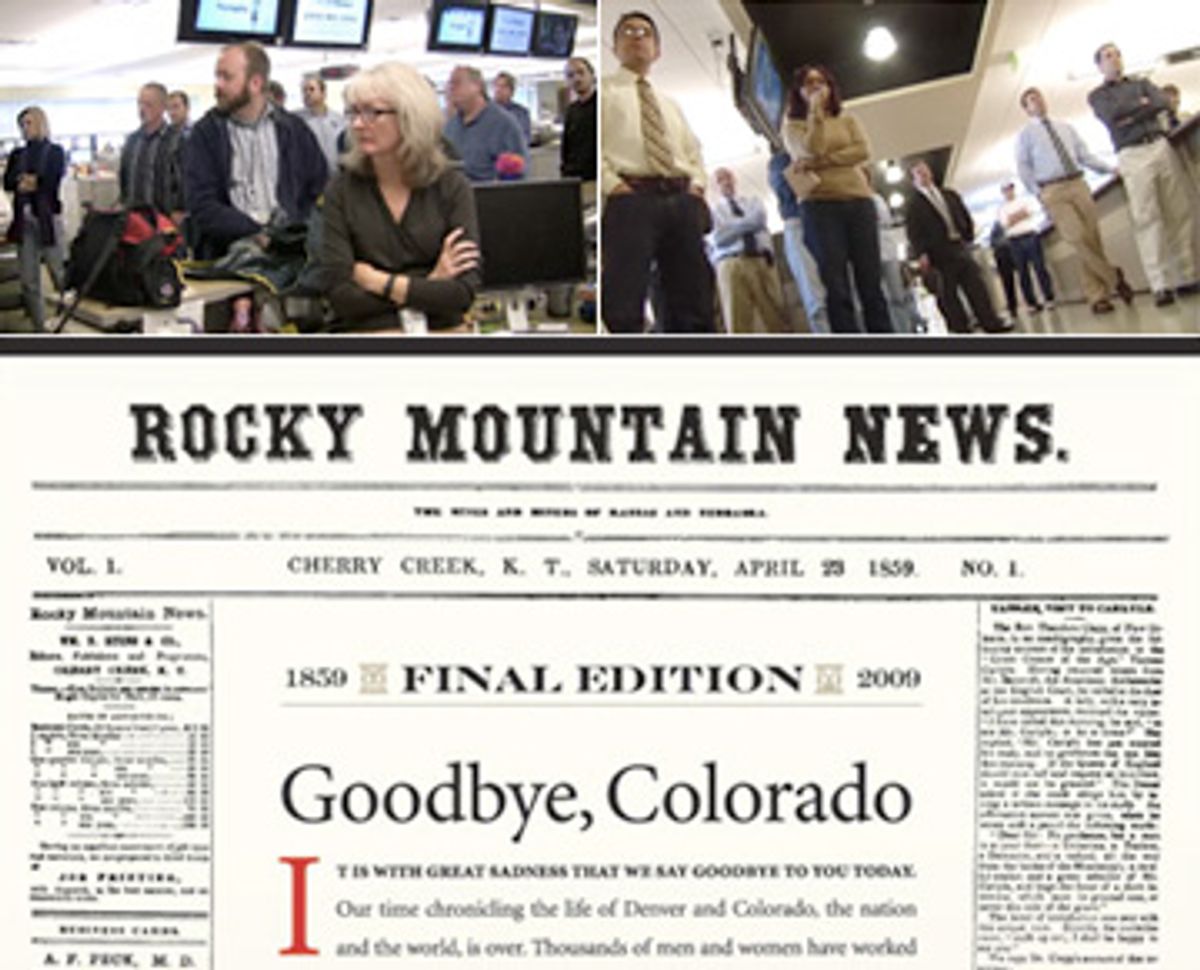 A couple of years ago, back when those of us who worked at the Rocky Mountain News still thought a redesign would save us, management asked some focus groups to "brand" the newspaper for marketing purposes. For reasons that are still unclear, they came back with automobile metaphors: The Rocky is a Ford. Dependable, solid. The working man's vehicle. The words "blue collar" may have been used. Our arch rival, the Denver Post, was deemed a Buick or a Cadillac, something more refined, more expensive. Sleeker.

Great, I thought, sitting in an auditorium of equally confused journalists who wanted nothing more than to get back to the newsroom. So are we an Escort or an Explorer?

The "brand" results were turned into a campaign in which the Rocky was described as a "Power Tool" for our readers. It was plastered across the sides of a newly acquired black Hummer that occasionally drove around Denver but mostly sat in our parking lot.

Friday, the Rocky, with a daily circulation of 210,000 and 457,000 on Saturdays, became the nation's largest newspaper to cease publication in an economic recession that already has sent the Chicago Tribune and both of Philadelphia's daily papers running for bankruptcy cover, among others, and put a For Sale sign on the Miami Herald. If we were a Ford, we ran out of gas 55 days before our 150th anniversary.

"We had a beautiful thing here," our editor, John Temple, told us as we huddled around the news desk on Thursday, 230 writers, editors and photographers about to be jobless in the worst economy since the Great Depression.

"I am sick we have to be here," said Mark Contreras, whose job for E.W. Scripps Co. is apparently shutting down newspapers.

"Not as sick as we are," said one reporter, sotto voce.

"This was one of the best newspapers in America," Contreras said, and the 'was' made our breakup complete.

Soon after that meeting, along with the TV crews and photographers wandering our newsroom to capture the final moments, a couple of guys began dismantling the lights and sound equipment for television production that most of us had forgotten were there.

The TV equipment was the artifact of yet another failed idea to save the paper called "convergence." "Convergence" meant that print reporters tidied up and reported to our miniature newsroom set and tried to breathe evenly while discussing our stories on-camera with our local TV station "partner."

Convergence came after the Power Tools campaign, but before someone in Scripps decided the Rocky should look like a magazine: Stories stayed on only one page, maybe two, and nothing jumped to the back.

Then we learned to Twitter and Flickr, to use our cellphones to take pictures and video and to carry our computers around so we could drop and blog, wherever we were. When the Democratic National Convention came to town in August, we were told we could wear portable tables that hung from our necks and folded out, like the cigarette girls of old. Unfold the table, fire up the laptop, and type. In other words, we didn't even need to sit down to write.

Despite all of that -- the time-suck of the marketing, the anxiety attached to learning the gimmicks -- the Rocky won four Pulitzer Prizes between 1999 and 2009.

I remember the day I decided to become a reporter. I was 17 years old and riding a city bus on a sunny afternoon in a Rust Belt factory town in Indiana. I lived on the edge of a neighborhood called Shed Town and I didn't know anybody who didn't work with their hands, if they worked at all.

I had recently read "All the President's Men" and I was enchanted by the idea that knowledge could right wrongs. But I had no interest in presidents. I wanted to write about people like me.

The Rocky gave me that chance for eight years. I spent most of that time covering Denver Public Schools, a poor, majority-minority (55 percent Latino) district with 75,000 kids desperately struggling to halt the downward spiral afflicting most inner-city school systems today. I was lucky to hang out with Julissa when she rapped to the superintendent with the Yale Law degree that he was treating her classmates like animals, and privileged to follow Ricky as he tried to fit into a high school full of kids from homes that didn't look much like his.

I seldom tripped over TV reporters doing the kind of stories I did and I doubt education stories will ever pull the kind of Web hits that sports stories do. Editor John Temple gave us permission to do that work anyway, spending months on projects tracking eighth-graders through graduation and exploring why one in four children in Denver don't attend the city's public schools. Knowledge may not always right wrongs, I found out, but it is the only thing that's got a shot.

Most of us journalists at the Rocky ignored all the marketing efforts that were meant to save the paper. We shrugged off the "Ford" brand, Convergence and the rest of the gimmicks, even those annoying folding tables. If there is a "brand" that we embraced, it was embodied in the instructions that were once posted in our managing editor's office. Three simple rules, not produced by a focus group: Get the news. Tell the truth. Don't be dull. I'd like to believe we did all three.

Nancy Mitchell is a former reporter for the Rocky Mountain News.