Translation: If your bouts of anti-Rush integrity last longer than four hours, call your doctor. 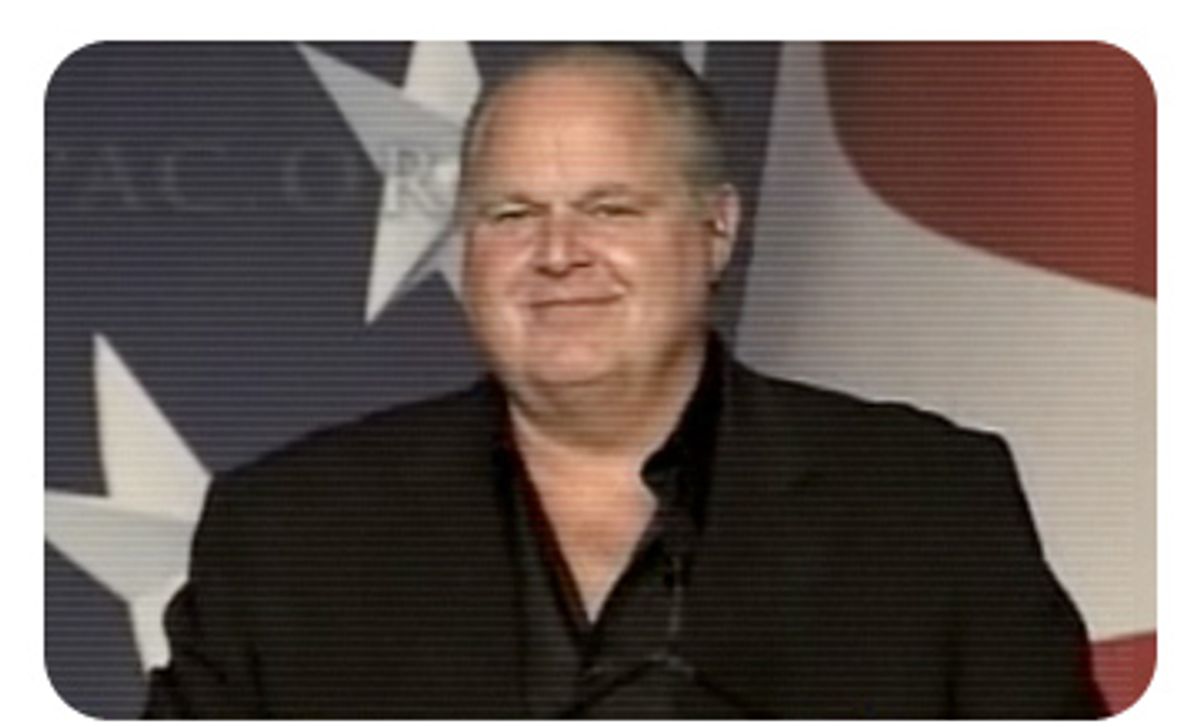 I just watched the disgraced Tom DeLay hail Rush Limbaugh on "Hardball," and warn: "Republicans better understand and look at the role model he's presenting ... Stand up and fight!" At the same time, the former House GOP leader insisted Limbaugh is the leader of the conservative cause, but not the Republican Party, and blamed Democrats for hyping Limbaugh's role.

The GOP's reputation is circling the drain, and President Obama's approval ratings are at an all-time high, according to a new WSJ-NBC poll. Just under 70 percent of Americans approve of Obama's performance, while only 19 percent of Americans disapprove, despite GOP obstructionism and loons like Limbaugh fervently wishing he'll fail. Only 26 percent of those polled have a favorable view of the GOP -- an all-time low. Still, terrified Republicans are trying to have it both ways: Keep the divisive Limbaugh on his big white pedestal, while blaming Democrats for saying he's their party leader.

But come on: Did Nancy Pelosi make Rep. Phil Gingrey apologize to Limbaugh last month for criticizing him? Did Howard Dean make Republican National Committee Chairman Michael Steele crawl to Limbaugh  exactly 51 minutes (according to "Hardball") after Limbaugh attacked him on his radio show yesterday, and say he hadn't meant to call Limbaugh's behavior "incendiary" or "ugly"? Is Harry Reid the reason it's impossible to find one, even one, Republican to criticize Limbaugh on the record -- without then racing to kiss his ring and apologize?

It's Tom DeLay, not President Obama, who is now designating Limbaugh as his party's "role model." It's irresistible to respond: Really? Limbaugh's the "role model" for the party of family values? A thrice-divorced, drug-abusing, Parkinson's-mocking, cigar-sucking egomaniac, a poster boy for meanness, overindulgence and excess? Some folks in my letters lately have objected to my discussing some of Limbaugh's personal traits, particularly his physical appearance at CPAC, where he I said he looked "sweaty and hopped-up." Facts are facts: He was sweaty and hopped-up. And with Tom DeLay saying he's a Republican role model, I think we have to take in Limbaugh -- all of him --to fully appreciate his outsize impact on the shrinking Republican Party.

Imagine if the Democrats had an unelected leader of Limbaugh's stature, who in the wake of 9/11 wished for President Bush to fail -- and who got other Democrats to join him. (I say "him" because it's simply impossible to imagine a female Limbaugh, of similar unlovely temperament and appearance -- a big, pasty, sweaty, nasty Ruth Limbaugh, let's call her, railing against Bush -- getting any kind of national podium, let alone the kind Limbaugh has. Just try that thought experiment for a minute, and then try telling me sexism is history.) Imagine him ranting and raving and sweating and hopping up and down at, say, a MoveOn conference. Imagine that when a few Democrats had the temerity to suggest that this unelected leader might be wrong, might be hurting the party, might even be hurting the country, they had to rush to apologize to said leader within minutes or hours.

Then imagine those same Democrats trying to insist that said leader is a "role model" but not, actually, in fact, technically, their party leader. If Democrats had done anything like any of this in 2001 and 2002, the mainstream media wouldn't be debating whether Republicans were actually to blame for exaggerating said leader's importance -- as MSNBC has done all day Tuesday  -- they'd be denouncing Democrats as the party of treason. To be honest, imagining a Democratic Limbaugh getting away with his brand of demagoguery and treachery is about as impossible as imagining a female Limbaugh.

And what about poor Michael Steele? He told Politico's Mike Allen that he'd been "inarticulate" and that he hadn't said what he really thought about Limbaugh. Do you need help remembering what Limbaugh said that was "ugly," Michael? How about the Chelsea Clinton "jokes," back when she was 13? What about visibly mocking Michael J. Fox for his Parkinson's tremors and insisting Fox was exaggerating his disease for political gain? Remember when Limbaugh complained, "We are being told that we have to hope [Obama] succeeds, that we have to bend over, grab the ankles, bend over forward, backward, whichever, because his father was black, because this is the first black president." Is that "ugly" enough for you, Michael? Maybe you want to rethink your apology? Sadly, I doubt it.

Still, there's one reason to believe Democrats, not Republicans, are to blame for all this mess about Rush Limbaugh, even though it's not true: the reliable old question, qui bono? Democrats certainly benefit from the circular firing squad. The GOP is in free fall, and it just keeps eating its young. Sarah Palin was the first sacrificial lamb, nominated for vice-president before she was ready (if she'll ever be) and then slaughtered (for the time being, at least) by McCain campaign leaders. Bobby Jindal was trotted out to almost certain failure after Obama's speech last weekend. Now Limbaugh has emasculated the brand-new RNC chair, Michael Steele. I'm sure it's an accident all three represented a possible future of the party that wasn't white and male.

So for now the future of the party is an admitted Oxycontin addict who plea-bargained his way out of a drug conviction, who mocks children and Parkinson's sufferers, who exhibits strange sexual fears about our first black president (why is he worried about "grabbing his ankles?"), who was famously detained on a Dominican Republic vacation for carrying Viagra without a prescription? I wouldn't mention that last little issue, except it helps me agree with Tom DeLay that he's a role model for Republicans: Clearly a party that is afraid to stand up to a bully like Limbaugh needs some kind of political Viagra, immediately. It would be nice to see a Republican whose bouts of integrity and courage lasted more than four hours.