The president needs to end Bush's disastrous policies at the Bagram Air Base prison in Afghanistan. 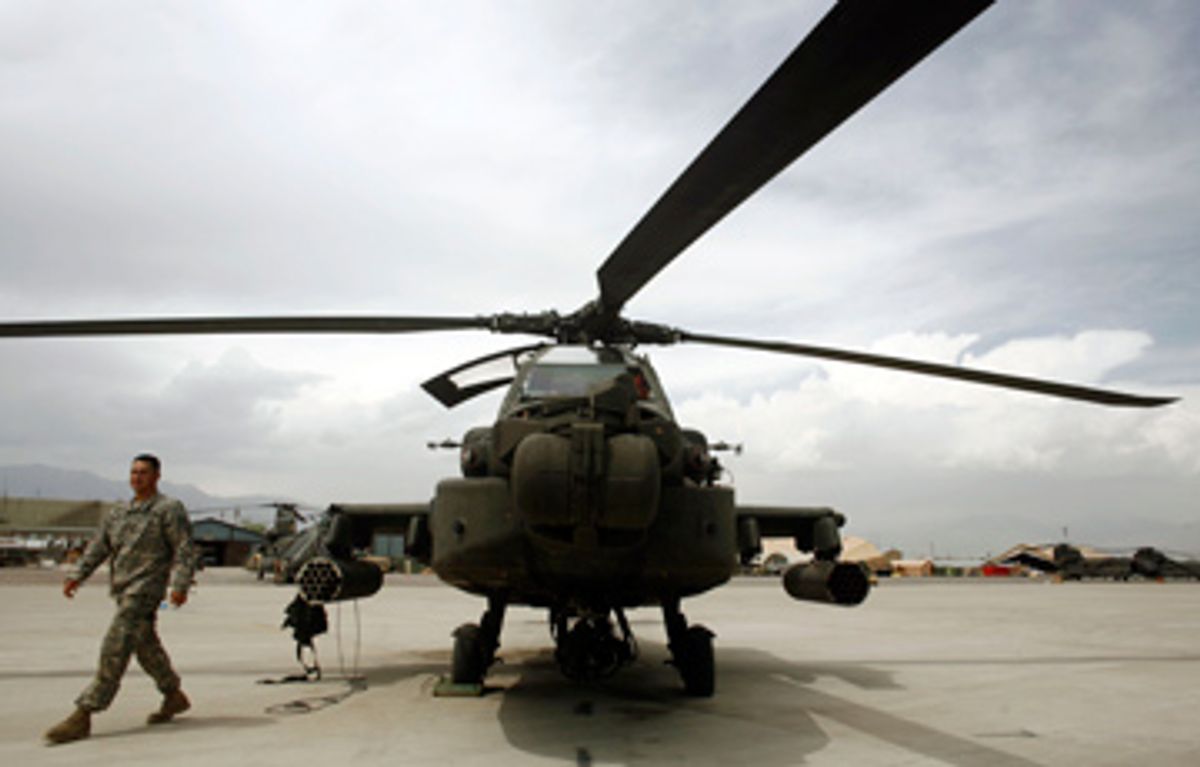 Just when you think you've woken up from a bad dream…

When it comes to offshore injustice and secret prisons, especially our notorious but little-known prison at Bagram Air Base in Afghanistan, let's hope the Obama years mean never having to complete that sentence.

In the Bush era, those of us who followed his administration's torture, detention and interrogation policies often felt like unwilling participants in a perverse game of hide-and-seek. Whenever one of us stumbled on a startling new document, a horrific new practice, a dismal new prison environment, or yet another individual implicated in torture policy, the feeling of revelation would soon be superseded by a sneaking suspicion that we were once again looking in the wrong direction, that the Bush administration was playing a Machiavellian game of distraction with us.

OK, call it paranoia -- a state of mind well suited to the Age of Cheney -- but when Abu Ghraib finally came to light, it turned out that our real focus should have been on the administration's program of "extraordinary rendition" and the secret CIA flights to the countries that were serving as proxy torturers for the United States. And when one case of torture by proxy, that of Maher Arar, achieved some prominence, we began looking at proxy torturers for the United States, when we should have been looking at legalized policies of torture by the U.S.

Several years ago, the British human rights lawyer Clive Stafford Smith placed that jewel in the Bush administration's offshore crown of injustice, Guantánamo, in the category of distraction as well -- distraction, that is, from the far grimmer and more important American detention facility at Bagram Air Base in Afghanistan.

Distracted or not, for at least five years some of us have been seeking the hidden outlines of the torture story. Now, President Obama has given it a visible shape by providing a potential endpoint, if not to our investigations, then to our focus. Much of what we focused on in these past years he has declared to be history. Guantánamo will be closed within a year, and the American role in the war in Iraq will end as well; torture will once again be banned; a new task force, already assembled, will review all the Bush administration's detention policies; and people like me will, assumedly, finally be out of work and able to write those novels we used to dream about. For us, no more unwelcome obsessions with detention, abuse and torture.

Still, ever since the Oval Office changed hands in January, I've had a nagging feeling that something was amiss. And when I finally focused on it, a single question kept coming to mind: What ever happened to the U.S. prison at Bagram?

I knew that it had been opened in 2002 on an abandoned Soviet air base that the U.S. had occupied, that it was being massively upgraded after the invasion of Afghanistan, and that its purpose was to hold prisoners in the global war on terror at a place as far removed as possible from the prying eyes of American courts or international oversight bodies of any sort. In fact, many of those eventually transported to Guantánamo were originally held under even worse conditions at Bagram and, from early on, they reported beatings, abuse and a startlingly wide range of other forms of mistreatment there.

But what else did I know? Thanks to New York Times reporters Carlotta Gall, David Rohde, Tim Golden and Eric Schmitt, as well as to Alex Gibney's documentary film "Taxi to the Dark Side," I knew that two Afghans, Dilawar and Jullah Habibullah, had been beaten to death by U.S. Army interrogators at the prison in December 2002. I also knew that the use of such beatings, as well as various other forms of torture, had been normalized at Bagram at the very beginning of the Bush administration's long march of pain that led to Guantánamo and then on to Abu Ghraib and other prisons in Iraq as well as foreign torture chambers.

From the 2004 Church Report (written by the naval inspector general, Adm. Albert T. Church), I knew that military interrogators and guards at Bagram had been given next to no relevant training for the mission of detention and interrogation. I knew as well that a secret CIA prison was allegedly located apart from the regular detention cells at Bagram. I knew that military officials had declared that the interrogation techniques at Bagram seemed to work better than those being used at Guantánamo in the same period. And that, after the Supreme Court issued a decision in 2004 to allow prisoners at Guantánamo to challenge their detentions, the prison population at Bagram began to grow.

What we don't know about a prison nightmare

But that was the past. What did I know about the situation in the first weeks of the Obama era?

The unnerving answer was precious little. So, as I had done with Guantánamo and Abu Ghraib, I began by asking the simple questions that had once been so difficult to answer about so many offshore detention facilities of the Bush era: Who was being held at Bagram? How many prisoners were there, and from which countries? What status did they have? Were they currently classified as "enemy prisoners of war" or -- in the phrase the Bush administration had so favored in an attempt to confound U.S. courts -- "unlawful enemy combatants"? How were they being treated? What reports on prison conditions had either the U.S. government or interested nongovernmental organizations released?

Setting aside the frustrations of the past seven years, I naively tried a basic Google search to see just what was instantly available, only to discover that the answer was, essentially, nothing.

It turns out that we can say very little with precision or confidence about that prison facility or even the exact number of prisoners there. News sources had often reported approximately 500 to 600 prisoners in custody at Bagram, but an accurate count is not available. A federal judge recently asked for "the number of detainees held at Bagram Air Base; the number of Bagram detainees who were captured outside Afghanistan; and the number of Bagram detainees who are Afghan citizens," but the information the Obama administration offered the court in response remains classified and redacted from the public record.

We don't even know the exact size of the prison or much about the conditions there, although they have been described as more Spartan and far cruder than Guantánamo's in its worst days. Representatives of the International Committee of the Red Cross have visited the prison, but it remains unclear whether they were able to inspect all of it. A confidential Red Cross report from 2008 supposedly highlighted overcrowding, the use of extreme isolation as a punishment technique, and various violations of the Geneva Convention.

We do know that a planned expansion of the facility is under way and will -- if President Obama chooses to continue the Bush project there -- enable up to 1,100 prisoners to be held (a step that will grimly complement the "surge" in American troops now under way in Afghanistan). There are no figures available on how long most of Bagram's prisoners have been held -- although some, it seems, have been imprisoned without charges or recourse for years -- or how legal processes are being applied there, if at all. Last spring, the International Herald Tribune reported that Afghans from Bagram were sometimes tried in Afghan criminal proceedings where little evidence and no witnesses were presented.

To students of Guantánamo, this sounds uncomfortably familiar. And there's more that's eerily reminiscent of Gitmo's bleak history. According to the New York Times, even four years after Bagram was established, wire cages were being used as cells, with buckets for toilets -- as was also true of the original conditions at Camp X-Ray, the first holding facility at Guantánamo. Similarly, as with Guantánamo, the U.S. has no status-of-forces agreement with Afghanistan, and so the base and prison can be closed or turned over to the Afghans only on U.S. say-so. Above all, while some Bagram detainees have lawyers, most do not.

The prison where it all began

While I was wondering about the state of our black hole of incarceration in Afghanistan, the Obama administration issued its first terse statement on the subject. When it came to granting four Bagram detainees habeas rights (that is, the right to challenge their detention in U.S. courts), the administration simply stated that it "adheres to [the Justice Department's] previously articulated position": Habeas would not be granted.

After all, reasoned the new government lawyers (like their predecessors), Bagram is in an indisputable war zone and different legal considerations should apply. But here's the catch neither the Bush administration, nor evidently the Obama administration, has cared to consider: It's quite possible that these four individuals, like others at Bagram, were not captured on an Afghan battlefield (as the prisoners claim), but elsewhere on what Bush officials liked to think of as the "global battlefield" of the war on terror, and then conveniently transported to Bagram to be held indefinitely.

The U.S. government refuses to make public any documentation that would support its case, and the new court documents, submitted by the lawyers of the Obama Justice Department, are frustratingly blacked out just as those of the Bush-era Justice Department always were. At least for the moment then, when it comes to Bagram, the administration's tactics and arguments remain unchanged from the Bush years. No wonder journalists and human rights lawyers have lately taken to referring to that prison as the "other Guantánamo," or "Guantánamo II," or more combatively, "Obama's Guantánamo."

Sadly, however, even this is inaccurate. From the get-go, Guantánamo was actually the "other Bagram." The obvious question now is: How will the Obama administration deal with this facility and, in particular, with matters of detention, "enforced disappearance," and coerced testimony? Will these be allowed to continue into the future, Bush-style, or will the Obama administration extend its first executive orders on Guantánamo and torture practices to deal in new ways with the prison where it all began?

Facing crimes of the Bush era

President Obama has given a newly convened task force six months -- a long time when people are being held in harsh conditions without charges or recourse -- to consider the matter of Bush administration detention practices and formulate new policies (or, of course, retain old ones). Here are some guidelines that may prove helpful when it comes to Bagram:

In the Bush years, we taught the world a series of harmful lessons: Americans can be as cruel as others. Americans can turn their back on law and reciprocity among nations as efficiently as any tribally organized dictatorship. Americans, relying on fear and the human impulse toward vengeance, can dehumanize other human beings with a fervor equal to that of others on this planet.

It's time for a change. It's time, in fact, to face the first and last legacy of Bush detention era, our prison at Bagram Air Base, and deal with it.

Call me a perpetual optimist, but President Obama has the right team in place to address this nightmarish legacy in a wise and timely way. We should expect no less from them than a full restoration of a government responsible to the law and confident of its power to deter enemies legally -- be it on the battlefield or in the courtroom. So, too, we must expect them to possess the courage to confront truths, even if those truths mean heading down the path toward the prosecution of crimes of the Bush years.

Karen J. Greenberg is the director of the Center on National Security at Fordham University Law School and author of "The Least Worst Place: Guantanamo's First 100 Days."