My girlfriend and I are happy except for one small detail -- we just can't seem to make new friends. 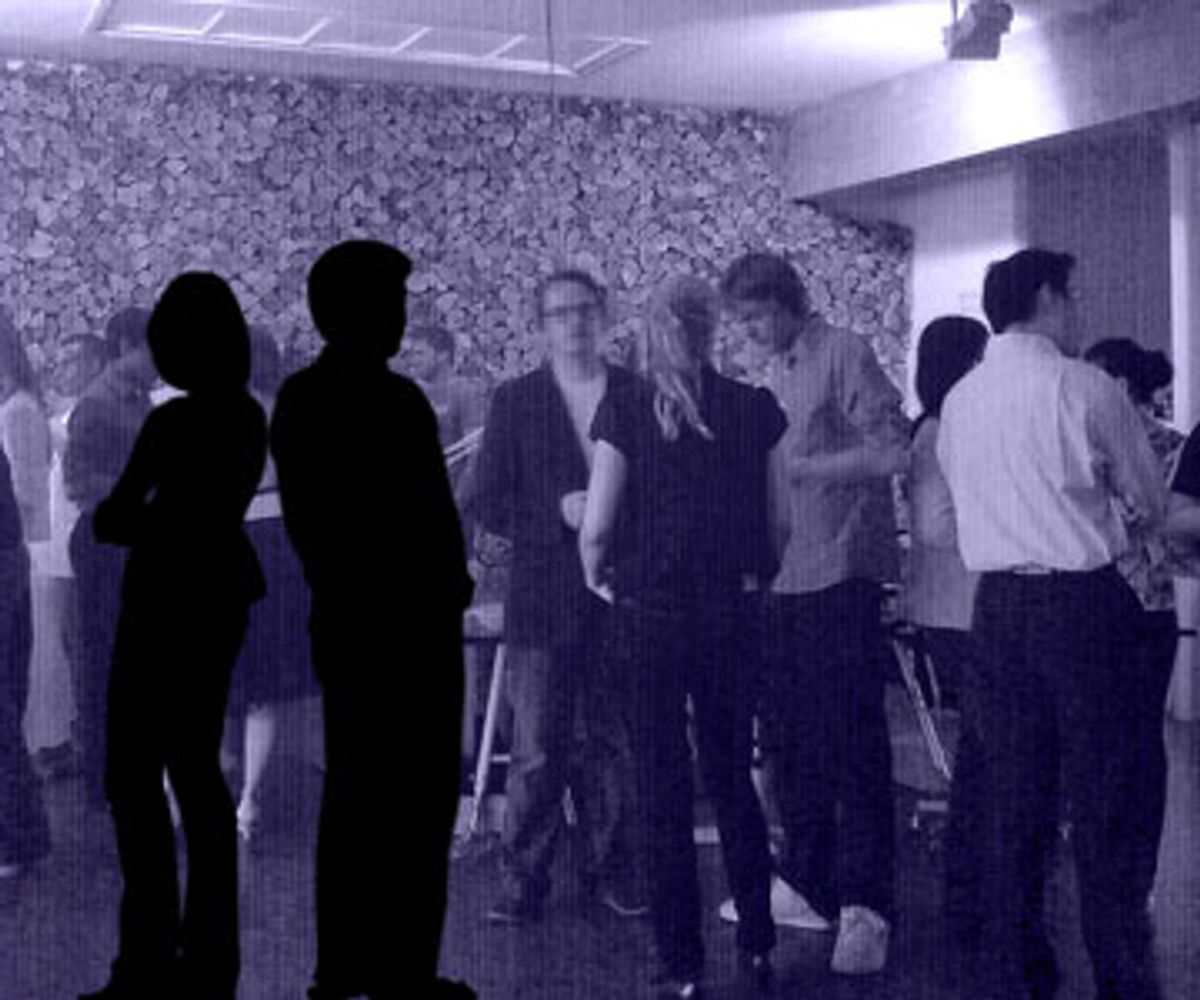 My wingman is outside on the back porch, chatting up a Grecian MILF with fake boobs. I hover near the dessert table, sipping a potent margarita and trying to follow as a married woman describes life as a social worker in an HIV clinic. She has no idea I'm judging her every word and action, each joke and cultural reference. I am assessing her husband as he looks on, too, and obsessing over what their clothing -- his corduroy jacket, her baggy jeans -- might say about them. My wingman returns from the porch without scoring even a phone number, and we bolt for the next party.

My wingman, for better or worse, is my girlfriend, but we're not swingers. We are on the prowl for friends -- because we don't have any.

Last year, I relocated from San Francisco to Chicago to live closer to my family and girlfriend, and to escape the bicoastal rat race. It was a successful move in every way save one: I have almost no friends here. That is, none in the real world. My Facebook profile is bursting at the seams with hundreds of acquaintances, colleagues and contacts, many within walking distance. But I can count on one hand the number I'd even take out for a drink. So much for the brave new world of social networking.

I suspect my predicament is fairly common, if somewhat embarrassing to talk about. It's even the inspiration for a new lowbrow comedy, "I Love You Man," in which Paul Rudd plays a guy who gets engaged only to discover he has no one to be his best man. For me, part of the problem is that, like so many 20-somethings, I've moved metro areas four times in the past 11 years, leaving close friends and boxes of useless tchotchkes in my wake. This peripatetic lifestyle is compounded by the fact that my girlfriend and I don't have traditional office jobs. She's an artist who works out of a private studio. I'm a freelance writer. It's great not to have a boss lurking over my shoulder, and to wear a robe and slippers to work most days. My after-hours life, however, has taken a serious nose dive.

So my girlfriend and I have embarked on a process akin to a platonic version of dating. Parties, for us, resemble nothing so much as speed-dating events. We search for friends of either sex, sending garbled nonverbal signals back and forth, waiting to gush about our new same-sex and opposite-sex crushes on the train ride home. I search for wedding rings on the fingers of women I like -- not because I'm hoping they're single, but because I'm hoping they're not, and that maybe their husbands will be willing to double date.

One weekend morning, my girlfriend and I lie in bed with a laptop, searching sites like Craigslist and MeetUp for activity groups. We're overwhelmed by the number of couples who like what we like, all posting profiles about themselves as they search for friends.

My girlfriend wants to volunteer at a green festival to meet new people. I'm more into the hiking clubs. Then we see a post by a woman wanting to trade nerdy theories about "Lost." That's us! We recently started watching the show. We love trading nerdy theories.

My girlfriend begins writing the woman an e-mail.

Before I met my girlfriend, I tried online dating on and off for five years. It didn't seem strange. I'd spent tens of thousands of hours on the Internet, and as far back as adolescence, I'd log on to the old BBS's (bulletin board systems), chatting late into the night. For some reason, though, online friend-finding feels icky. Weirdly taboo. When you're looking for that special someone -- or, say, a person willing to have sex with you -- it seems natural to search using any means necessary. But is it that hard to find someone to sit and talk about a television show? Can these people really be this desperate? Are we really this desperate?

"This is absurd," I say, and I shut the laptop.

I sometimes worry my social patterns are tending toward those of my father, a wisecracking physician who's the life of every party he attends, but like many boomer males, has few close friends. Sure, he has his weekend golf buddies, and college and med school pals dotted across the country. But when my mom hasn't liked the wife (or the husband) enough to make an effort toward socializing, my dad's friendship usually fades away, overwhelmed by a gale of 12-hour workdays and family obligations. If he retired tomorrow with a datebook blank for the whole year, I wonder how he'd fill it.

Until recently, I thought of myself as different, especially when it came to maintaining friendships with other men. I am not afraid to ask a guy out on a so-called man-date. I don't need to use SportsCenter or an action movie or an indie rock show to overpower the supposed latent homoeroticism that some men attribute to one-on-one male socializing. I'm as comfortable talking about relationships with another dude as I am arguing about politics. But it seems the older I get, the harder it is to find new people to engage in these conversations.

I scan my Facebook news feed throughout the day, taking stock of the soap opera digest version of my friends' lives and accomplishments, travails and oddities. Laura changed her relationship status to engaged. Ed joined the group "People who don't sleep enough because they stay up late for no reason." Paul just teabagged someone with the Super Poke application.

Who are these people, anyway? High school acquaintances with whom I lost touch before "Titanic" hit theaters and will never reconnect with outside the virtual realm. School classmates I'd love to meet for a drink, except they live on the other side of the world. Time slowly wrenches apart even the strongest ties, and phone calls start to feel like spoken versions of Facebook updates: My relationship status is this, my career status is that, my housing status has changed.

There is a vast gulf between vaguely keeping in touch with someone and actually sharing, experiencing, exploring and all the other things you give and get and take from a close friendship. I find it increasingly difficult to cross over that gulf with those I'm meeting now. It's a poignant thing to be a full-grown human and realize you're deficient in something that seems so effortless for children.

The night after my 29th birthday, I went to a bar up the street from my apartment. I'd just met this guy Andy through a long chain of mutual friends, and over time, our conversations slowly matured from basic biographies to life updates to, once in a while, topics of actual consequence. These talks echo my late-night college discussions -- about politics and science and artistic creativity. The relationship may lead to nothing. It may lead to something great. But I know that Andy and his crew have given me a small sense of belonging -- something I hadn't craved so badly since I was a teenager.

As I walked into the bar, Andy yelled out "Happy berfday!" in an endearing, ironic, I'm-extremely-white-but-I'll-talk-like-a-rapper sort of way. It was only a small gesture. But it felt better than all the Facebook comments, e-card, e-mail and voice-mail birthday wishes in the world.

Ryan Blitstein is a contributing editor at Miller-McCune. His reporting on national affairs, business and culture has appeared in publications including Time, New York Observer and Chicago Tribune Magazine.