A eulogy for my father's words

Critic and novelist John Leonard built grand cathedrals out of language. His son pays tribute to his lexicon and his passion. 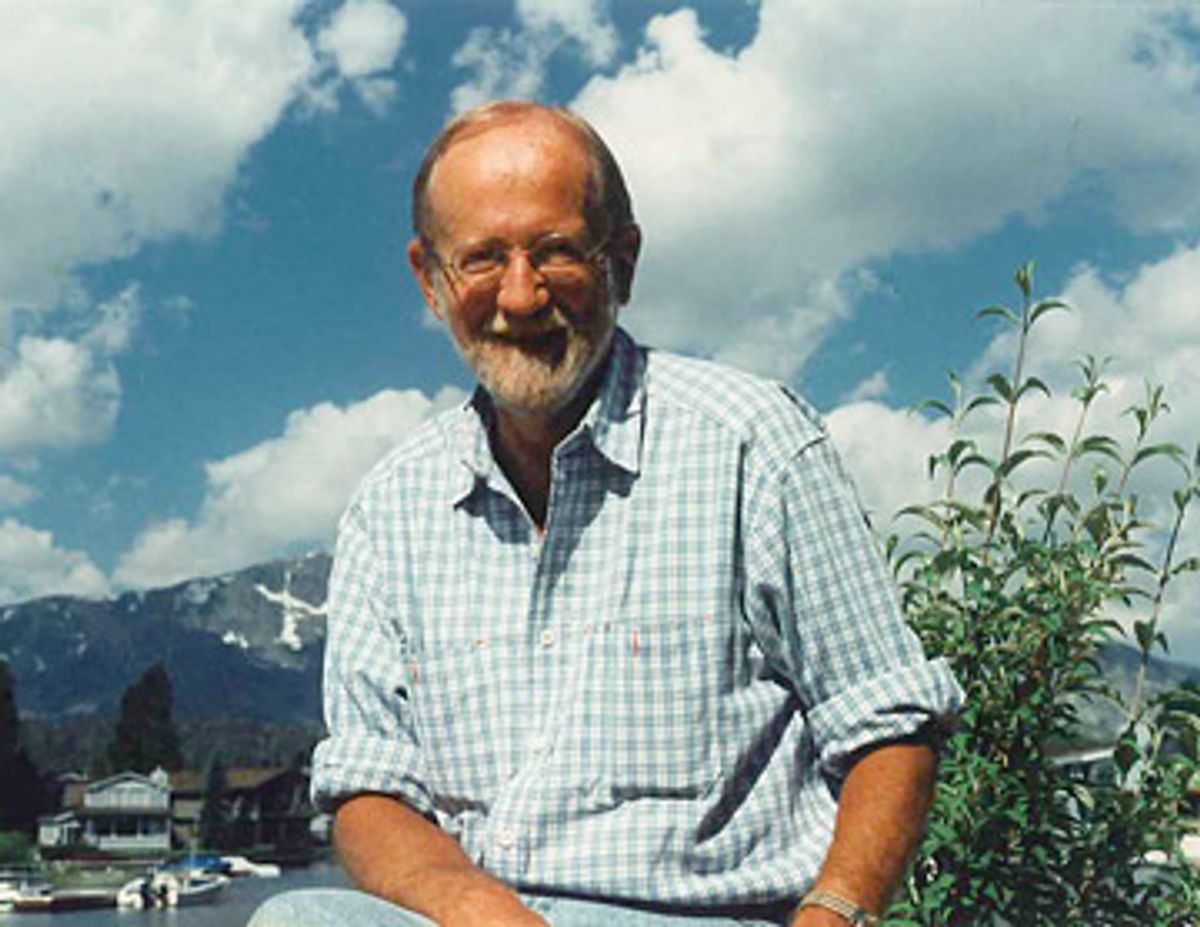 Last November, the day after the presidential election, my father, a well-known critic and multimedium commentator, died. I wrote my own personal memorial at the time and my colleague Laura Miller wrote a moving tribute.

So many of the ensuing obituaries and appreciations focused on my father's extraordinary love affair with the English language that I decided to see if I could celebrate his words, rather than tell some more stories about him, at his official memorial ceremony. Some 300-400 people attended the wake, held at the Landmark on the Park in New York City. Toni Morrison spoke, as did E.L. Doctorow and Gloria Steinem. If you enjoy some wordplay, then you may enjoy my eulogy.

I recently completed a comprehensive computer analysis of my father's collected works and confirmed what I have long only suspected: 97.4 percent of everything that ever emanated from his typewriter, keyboard or mouth can be safely ignored. All that verbiage is utilitarian scaffolding, employed to hold up 10 critical words.

Many of you who are familiar with my father's literary tendencies may feel the urge to quibble. Where are the mystagogues and omophagous worms; the looming haruspex and the stunning cathexis? My father was famous for his erudition. And you give us moxie and thug?

But as exciting and impressive as the fancy-pants silver-dollar words may be, they are not essential to understanding the John Leonard Project. They are baroque ornamentation. Strip them away and you lose nothing.

Others of you may contest the computer findings, with your own list of high-frequency-per-page words. But I had to make a judgment call. I excised all words that my father delighted in simply because they pleased his ear. Words such as "kayak" and "aikido," "guppy" and "rutabaga." It would be a mistake to embody these words with metaphorical power, or to hope for revelatory insight from them into the essence of my father. Quite the opposite: I am unaware of any physical evidence proving John Leonard was ever within 50 yards of a kayak, and the only time he suffered the discipline of the dojo was when witnessing his granddaughter perform her kata. And I am skeptical as to whether he could have told the difference between a rutabaga and a Brussels sprout.

Freud, I'm sure, would caution against the perils involved in posthumously editing one's father, and I will admit to some qualms as I guide my own kayak through these treacherous waters, but in one of my father's columns, the word "rutabaga" appears five times. That, I think, is excessive.

Even more problematic is a third category: reoccurring compound phrases of two or more words that do hint at murkier depths. Categorical imperatives, imperialist lackeys, internal contradictions and unindicted co-conspirators, all of which have a habit of showing up in the unlikeliest of places, such as snuggling up next to Blythe Danner in a Lifetime TV movie review. My father rarely missed an opportunity to brandish such jargon, and I cannot dismiss them as baroque ornamentation. They mean something.

But then I realized that I, too, do my best to get away with such high jinks. Indeed, I have come to think that any self-respecting writer who does not seize the chance to weave Hegel, Kant, Mao and Watergate into an appreciation of "CSI:Miami" is falling down on the job. My father was more successful in his efforts at infiltration than most writers, but this does not, I think, fundamentally distinguish his cathedrals from those built by others.

I will not bore you with an exegesis of each and every one of the Ten Foundational Pillars of the John Leonard Lexicon. But they are clues that deserve investigation. My father cherished tantrums. A well-executed tantrum is a wondrous thing, whether performed by a 2-year-old or on "CBS Sunday Morning." As for thugs -- they swarmed whenever the enemy showed his or her flag. Hitler had his thugs and so did Nixon. As did Werner Erhard, and even the French! There are few things my father detested more than a post-structuralist thug.

Which brings us to "libidinal."

In my interpretation of the lexicon I have relied heavily on "Private Lives in the Imperial City," the columns he wrote for the New York Times in the late 1970s. There's a lot of libido in "Private Lives." More than I counted on. But I didn't grasp the true depths of my father's obsession until I witnessed, in two consecutive columns, my father dropping the smart-bombs, "libidinal cathexis" and "libidinal compost heap."

Talk about excessive! In the latter case, the children are playing downstairs, in the libidinal compost heap. We'll just leave that be. But, in the case of the former, after, with a deep and heavy sigh, I cracked open a dictionary -- and may I just say that at age 46 it is insufferable that I am still reaching for the dictionary to decipher what my father was going on about -- I learned that "cathexis" is a Greek word, employed to translate the German word "bestzung," which was itself used by Sigmund Freud to refer to the "concentration of psychic energy on some particular person, thing, idea, or aspect of the self." An expert in Freudian psychotherapy could probably provide more nuance, but I choose to define "libidinal cathexis" as the concentration of psychic energy on some person, thing, idea or aspect of the self, for the purpose of gaining great pleasure.

That is the John Leonard Project -- both his means and his ends. He did not like to pan books or movies or TV shows or children, except when absolutely necessary. Instead, he lived to exalt, to spread the dazzle, and in the process of doing so, make of his own words a libidinal tsunami that brooked no resistance. When my father was on, and he was almost always on, even to the last, his words, properly lingered over, incited passion, got the heart racing, stirred the blood and the mind and the soul. Their libidinal flow was, and is, extraordinary. In the midst of it all, one unself-consciously gasps. Afterward, even those of us who don't smoke reach for a cigarette.

This was true from the very beginning. After generating my list, and poring over "Private Lives," I opened up my father's gin-soaked debut novel, "The Naked Martini," for the first time since I was a senior in high school. I was comforted to discover, like old friends, the word "brood" on the first page and "libido" on the second.

"Qualm," however, made no appearance in the entire first chapter. I found this enlightening because qualms fester in roughly 30 percent of his "Private Lives" essays. "Dmitri" -- my father's alter ego -- is constructed of qualms, as are his friends, as are the writers he embraces. Qualm by qualm, we descend into the nether reaches of his psyche, Scotch in one hand and a carton of Tareytons in the other.

This makes sense to me. Too many qualms felt at too young an age and that first novel never gets written. But for the honest and sensitive artist, qualms accumulate with experience. They must be admitted -- they are part of the permanent record. I think my father may have overindulged, but I will not edit him on this point.

And I must also concede that there are a group of words that transcend the lexicon, which have so far been left out of the accounting. In one column, my father, who did not particularly care for cats, told of watching a kitten named Gulliver convert an inadvertent fall off a window sill into a perfectly executed double back flip. My father was charmed, despite himself. The kitten imperative cannot be denied. And so he delivered himself of the following line:

"If there is a chord in us that kittens strike, maybe there's one for justice, and for mercy, for sacrifice and reciprocity, kindness and respect."

My father believed in all those words and lived up to all those words. And he loved every last one of his words, the fancy and the salt-of-the-earth, the scaffolding and the ornamentation and the raw bones. I have no qualms in suggesting that all of us gathered here, in this regard, are his willing and eager, even if unindicted, co-conspirators.

My eulogy for my father mentioned Werner Erhard in a manner intended to be humorous, part of an illustration of how my father used the word "thug" to apply to anyone he didn't care for. The eulogy was not intended to imply that Mr. Erhard employed or associated with criminals or other violent or anti-social people.