The weirdest Rachel Maddow interview ever

Vanity Fair's Q&A with the MSNBC host is a special kind of crazy. 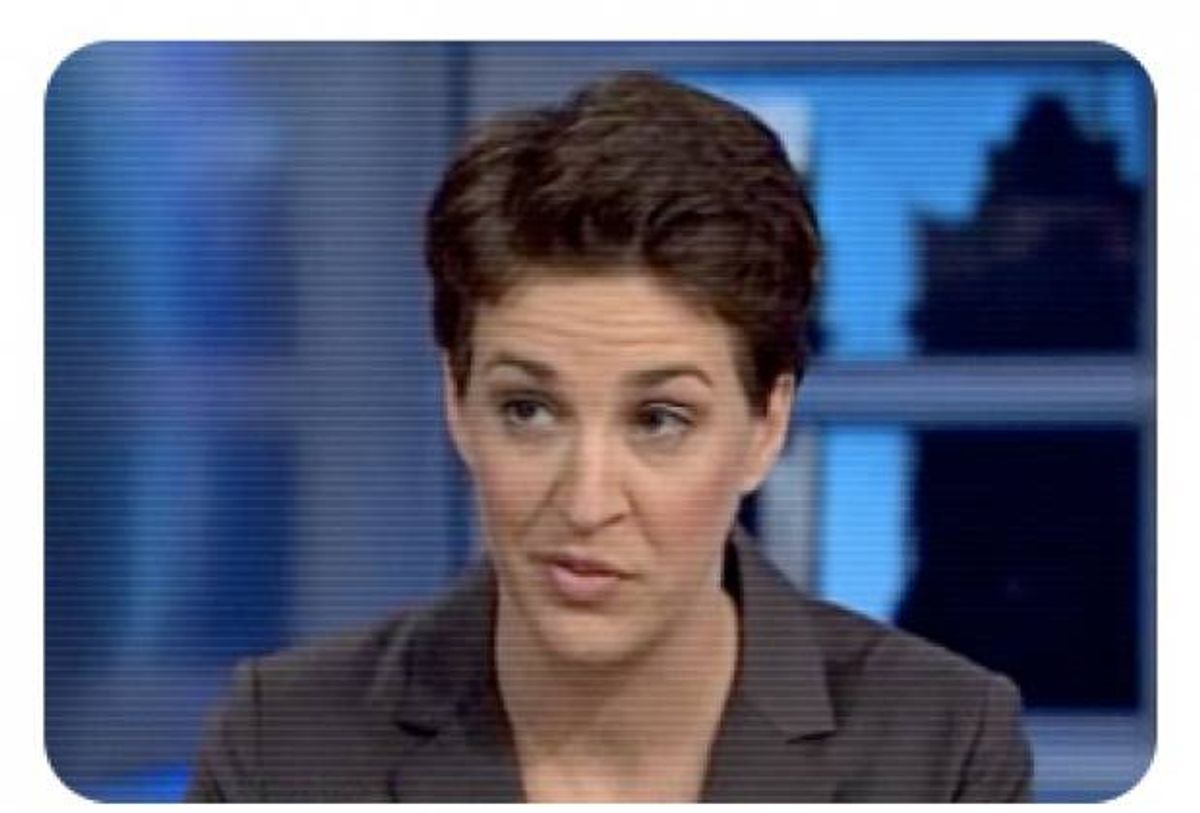 Vanity Fair's interviewer George Wayne isn't exactly known for being on-point. Or sane. No, G.W. is an old-school queen who fancies himself Oscar Wilde, refers to himself in the third person and tosses out sexual overtures generally reserved for a five-martini blackout, all of which makes for schticky, love-em-or-hate-em interviews you won't read anywhere else. But this month's Q&A with Rachel Maddow is a special kind of crazy. We begin semi-normally enough:

Now here you are, the most famous television dyke, well, since Dinah Shore!

Ellen and Rosie are more famous.

You are the smartest. What thought crossed your mind when you first shook the hand of potus 44? Was it "Wow, your ears are really big"?

No, it was more like "Boy, he's relaxed. He's as cool as a cucumber." He is like this incredible center of cool.

G.W. does ask about cable news (kind 0f) and manages to coax out a bit of relevant information from Maddow -- like the summer she spent running a campaign for HIV-positive prisoners with the ACLU in Mississippi -- but soon gallops off on bizarre tangents about paraphilia, the eroticism of farting and G.W.'s throbbing boner for Prince Harry. ("G.W. has been fantasizing more than ever of tossing that royal salad. I would floss every strand of that red burr to perfection!") All that, and it's a really short interview.

Jezebel's Megan Carpentier has gone on rage sessions about the media's fixation with Maddow's sexual orientation, and Wayne is certainly stocking up her ammunition. He ends with an exchange that's meant to be funny but just comes off as hostile:

By the way, before your Peacock Network makeover, didn't you have a dyke-stache?

Facial hair over your lip -- a dyke-stache.

I never had any facial hair in my life.

And on that note, they end the interview, which doesn't seem particularly fair, giving the punchline to old G.W. and leaving Maddow tarred with the ignorant "dyke-stache" smear. But you have to give the whole thing points for pure self-satirical weirdness. Charlie Rose never called anyone a "saucy pedant." Yet!