Like a Virgin Megastore, shut for the very last time

All U.S. outlets of the music chain will be closed before summer in another sign that the record store as we knew it is dead. 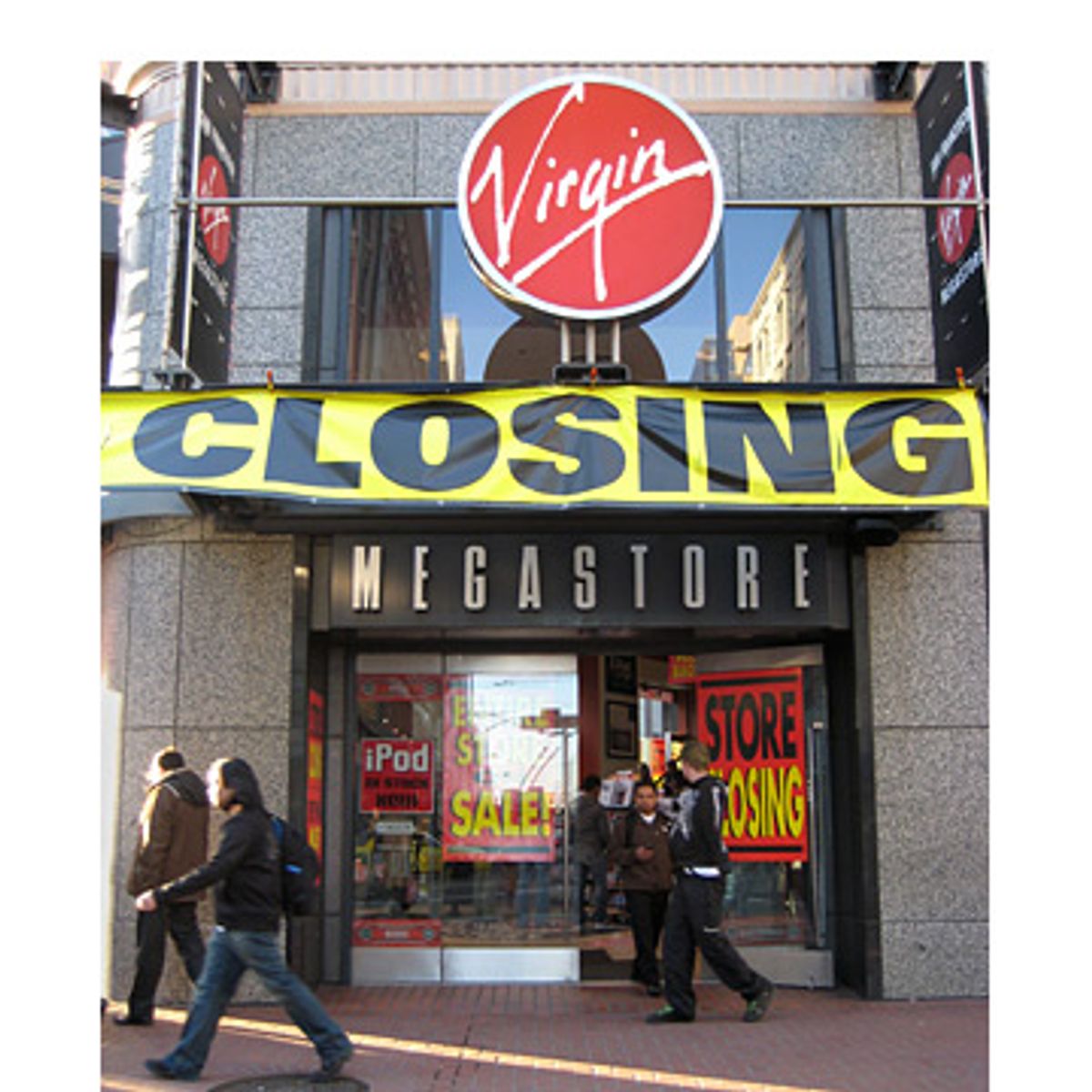 The ground floor of the Times Square Virgin Megastore has an air of chaotic neglect. Generic "Everything Must Go!" and "Nothing Held Back!" signs hang over shelves crammed with recent DVDs, "Guitar Hero" dolls and PS2 games. Downstairs in the deserted music section, one person distractedly stops at the table piled with box sets of Springsteen and Björk. Almost everything is 40 percent off, but that's not convincing enough. I walk over the image of Nirvana's "Nevermind" cover projected onto the floor -- a reminder of a time when people actually got excited about buying records -- and try not to step on the floating baby.

This branch of Virgin Megastore at Broadway and 46th Street in Manhattan, apparently the single highest-volume music store in all of America, is closing in less than a month. In fact, all six remaining U.S. Virgin branches are being shuttered this spring, leaving more than 1,000 people jobless and leaving New York City without a major record store. It's not just the chains and the big names that are suffering. Some genre-specialist outlets are hanging in there, but generally speaking the independent record store is also teetering on the brink of extinction. It's the same story from big cities like New York and Los Angeles to college towns across the country. The current economic crisis is the death blow to an already weakened species. Even an economic uptick in the near future probably wouldn't save the retail music industry, which was staggering even when times were good. Sales of CDs have fallen in seven of the past eight years, and were down a full 20 percent from 2007 to 2008.

We know why people aren't buying music from stores the way they used to: online purchasing for those laggards who still crave albums in physical form, legal and illegal downloading for everyone else. I can't even recall the last time I bought a CD from a flesh and blood salesperson. But sometimes when an old song pops up in my iPod, my mind inadvertently flickers back to the place that I first touched that record, and the epiphanies that punctuated my record store rambles. Maybe it was something I heard in the cramped second floor backwater Connecticut dump where the guy at the register played a Joy Division single on the store turntable, causing me and everyone else there to stop in our tracks; or the impossibly narrow West Village basement hangout where I always met people I knew who pointed me toward vinyl I needed to have. Yes, vinyl, as in a "record," from whence record stores got their names, the kind that had cover art big enough to see as well as a satisfying weight as you sifted methodically through the overstuffed record store racks.

And then there was Virgin Megastore on Oxford Street in London, which I visited on my first trip abroad as an Anglophile teen in the '80s. I was pretty wowed by everything English (a fast food chain called Wimpy Burger! Toilet paper made out of wax!), but I can still feel the special frisson of entering what appeared to be a music-lover's paradise: an enormous space pulsating with music and light, packed with miles of aisles of cool vinyl. Sure, you lost the intimacy of the independent store, but you also lost the potential downside: the "High Fidelity"-style resident snobs/experts, invariably male, ready to congratulate you when you made an aesthetically impressive choice or humiliate you with their withering looks when you failed to meet their standards. Virgin had an in-store D.J., private listening booths and plenty of room to mingle with records while also flirting with cute, lanky boys in eyeliner. Alongside the diversity of music, the megastore stocked a selection of culty and esoteric books, adding to the sense that Virgin offered a magical combination of mall-like consumer convenience and independent-minded cool. In America at that time, there was really nothing in between your Sam Goody chain store and the tiny mom-and-pop.

If I had known anything about Virgin's origins, it probably wouldn't have surprised me so much to find a place that seemed both mainstream big and underground intimate. Virgin mogul Richard Branson, now one of the most famous entrepreneurs (and richest men) in the world, had begun his career selling records out of the trunk of his car. That led to a mail order record company specializing in European imports of cosmic rock and progressive music. When a postal strike screwed with his mail-order business, Branson opened his first Virgin outlet in 1971 -- a groovy record store in Notting Hill Gate, then London's equivalent to San Francisco's Haight-Ashbury. Customers would hang out in the store all day, smoking joints while plopped on beanbags. Propelled by the fingers-in-too-many-pies ambition that would be the hallmark of his entire career, Branson also started a fashion company (called Virgin Rags) and a health-food store around the same time. Neither did as well as the record store or his next big venture, a music label that supported a roster of audaciously non-commercial music from its birth in 1973 right through to punk (Branson famously signed the Sex Pistols after they'd been kicked off two other labels).

The Notting Hill store begat the first megastore, which launched on Oxford Street, London's most bustling shopping boulevard, in 1979. Over the next decade and a half, Virgin would export the megastore concept all around the world, including the U.S. At its peak in 2002, the U.S. chain counted 23 stores and $230 million in sales. Those American spots generally offered the same kind of range as the Oxford Street store I visited all those years ago (even if they seemed a little less glamorous here on familiar ground, where the boys wore a lot less eyeliner). But it did have a rival, in the form of Tower Records, another store that made the record fiend feel giddy at the sheer scale and range of its stock, and also wore its alternative cred on its sleeves.

Tower went bankrupt in 2006. But Virgin Megastores in the U.S. is being dissolved because its current owners -- not Branson, who long ago sold off his retail chain, but a joint venture of real estate companies that bought the chain in 2007 -- believe they can make a lot more money from the property that the Megastores occupy than from CD sales. (The British chain of megastores is also shutting down, though stores in places like Australia and Japan survive.) In other words, the new U.S. owners are betting on something, anything, other than music.

Virgin, like Tower, started to lose its luster a long time ago, of course, becoming more like a shopping mall than a record-geek haven. Still, for those who remember its prime, it's another melancholy reminder that an era is ending. In fact, there's been a whirlwind of commemorative activity recently dedicated to the independent record store, from the book "Old Rare New" (a collection of testimonials and essays) to the documentary "I Need That Record!: The Death (Or Possible Survival) of the Independent Record Store," which continues to make the rounds of the festival circuit. There is even a Record Store Day -- April 18 -- devised as a way to support independently owned American stores with special releases and performances. The only area of record retail that seems to be doing OK, even prospering, is used vinyl, especially the high-end, boutique sector catering to collectors willing to pay good money and who are still addicted to the thrill of the hunt and the random discoveries that you don't get from eBay or Gemm. But that only serves to reinforce the grim truth: The future of the record store lies in music's past. The Times Square Megastore, meanwhile, will be replaced by an outlet of the clothing chain Forever 21.