Cramer vs. Stewart, in person

"I understand you want to make finance entertaining. But it's not a f---ing game," the "Daily Show" host tells Cramer during an epic interview. 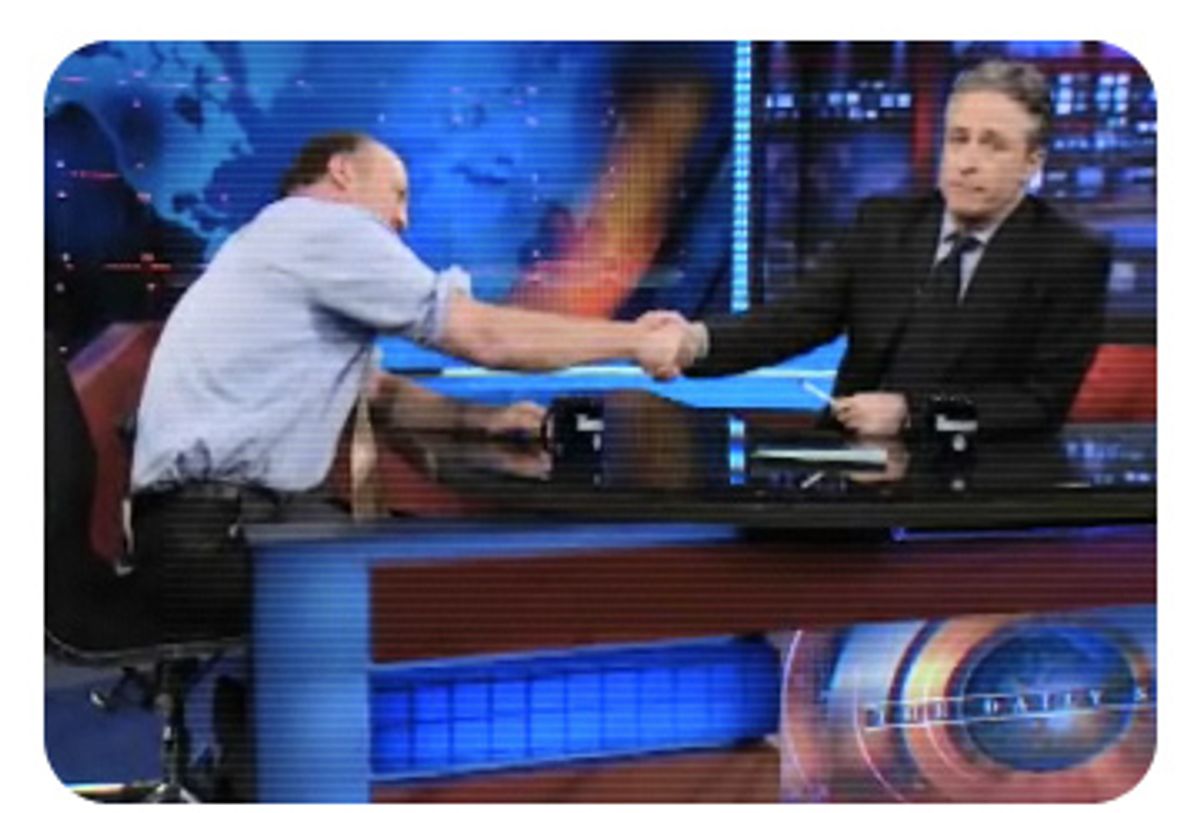 In the day leading up to Thursday night's face-to-face meeting between feuding cable hosts Jim Cramer and Jon Stewart, both men seemed to be trying to defuse tensions and downplay their very public spat. Stewart even told his audience on Wednesday that the interview, when it happened, was, "by all measure, bound to disappoint anyone that's been following."

He was wrong. What "Daily Show" viewers saw on Thursday night wasn't a boring love-in; it was a smackdown, or perhaps an homage to the human sacrifice scene from "Indiana Jones and the Temple of Doom" -- the one where they rip out the victim's heart and show it to him. At the very least, it was a riveting half-hour, something almost completely unlike anything else ever seen on television. (You can watch it below.)

The clue that the interview wouldn't be rainbows and hugs came early on, when Stewart told his guest, "Look, we're both snake oil salesmen to a certain extent." Cramer, still eager to please, jumped in to say, "I'm not disagreei--" before being cut off by Stewart, who said, "But we do label the show as snake oil here." At this, the CNBC host visibly grimaced.

At points like that during the interview -- and there were many of them -- you almost had to feel sorry for Cramer. It was clear he'd come to the interview prepared to make nice, even desperate to. His voice was plaintive and cracking, his eyes were watery, he seemed willing and eager to agree with any and all of Stewart's criticisms in a futile effort to make the pain stop. Besides, just Wednesday night, the "Daily Show" host had been playing down the feud, and now here he was rolling numerous clips from a 2006 interview that shows Cramer discussing some unsavory practices from his hedge fund days, the kinds of things that could get the Securities and Exchange Commission involved.

And then, on the other hand, so much of the beating Stewart delivered felt deserved, especially when, towards the end, he started getting mad.

"I understand you want to make finance entertaining. But it's not a fucking game," he told Cramer. Then, referring to that video, he continued:

And I -- when I watch that, I get, I can't tell you how angry that makes me. Because what it says to me is that you all know. You all know what's going on. You can draw a straight line from those shenanigans to the stuff that was being pulled at Bear and at AIG and all this derivative market stuff that is this weird Wall Street side bet... Listen, you knew what the banks were doing and yet were touting it for months and months. The entire network was. And so now to pretend this was some crazy once-in-a-lifetime tsunami that no one could have seen coming is disingenuous at best and criminal at worst.

"Look, nobody's asking for them to be a regulatory agency. But can't -- whose side are they on?" Stewart asked Cramer at one point. "It feels like they have to reconcile: Is their audience the Wall Street traders... These guys at these companies were on a Sherman's March through their companies financed by our 401Ks... And they burned the fucking house down with our money and walked away rich as hell and you guys knew that that was going on."

It's hard to knock Stewart for this kind of thing, as he's absolutely right about what financial journalists should have been doing and about their failure to report a realistic picture of the big banks rather than the rosy one painted by their executives. But he did come across a little naïve, especially for someone who works in television. CNBC's audience is absolutely the traders -- they're the lifeblood of the network. Lay people don't watch business news 24 hours a day, but people in the field do, and so CNBC and plenty of other financial journalism is made by them and for them. Doing the kind of hard-hitting reporting Stewart is calling for would screw up the business model.

Still, it's a nice dream to have, and Stewart at least got his opponent to agree to try it his way.

"Maybe we could remove the financial expert and the 'In Cramer We Trust' and start getting back to fundamentals on the reporting as well and I can go back to making fart noises and funny faces," he said at the close of the interview.

"I think we make that deal, right here," Cramer responded, and the two men shook hands.

Update: Comedy Central's now posted the video of the interview, which you can watch below. The three clips that I've included here appear to be all the material that was broadcast as well as quite a bit of stuff that ended up on the cutting room floor before the actual show.