The comedians behind "The Whitest Kids U' Know" cram their film debut with boobs and poo jokes -- but end up with a serious stinker. 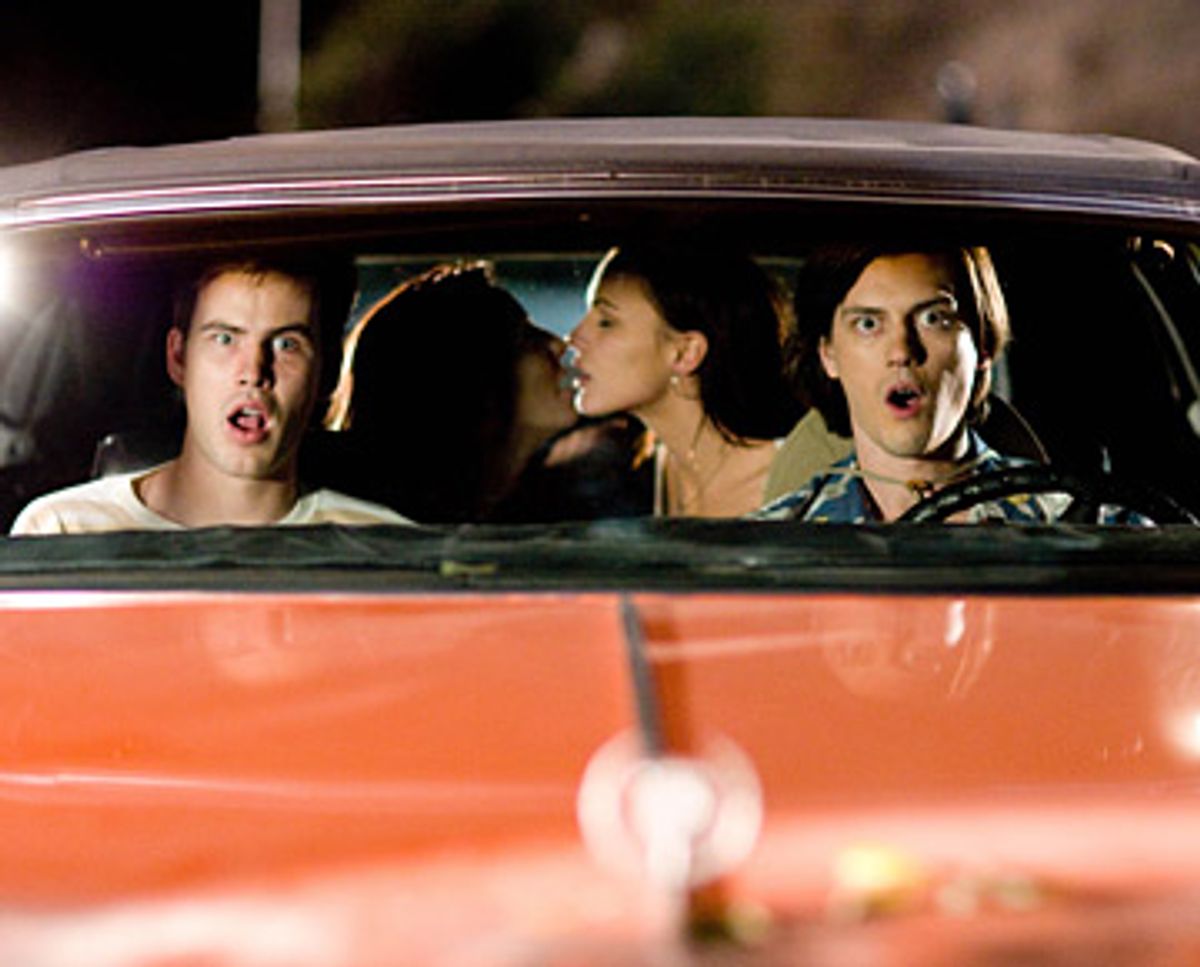 We've all been reading that box office sales are up because out-of-work or just generally depressed people want to go out to the movies and have fun. Escapist action movies and comedies, like "Taken" and "Paul Blart: Mall Cop," have become big winter hits. We've also been reading about how even when movies like "The Reader" win Academy Awards, no one wants to trek out to see them. The common wisdom is that those are take-your-medicine movies, pictures that actually demand that you think.

I'd argue that responding to an expressive, alive (if dumb-bunny) picture like "Taken" actually uses more brain cells than dipping into the puddle-size pseudo-depths of "The Reader." But if escapist entertainment is going to be the wave of the future -- or at least the near-future -- it's time to start recognizing that not all escapist entertainment is created equal. And that some of it isn't even entertainment. "Miss March" is, to use the vernacular of the escapist moviegoer, the biggest pile of crap I've seen in ages. This so-called comedy, about a chaste young man who awakens from a four-year coma only to learn that his equally chaste girlfriend has become a successful Playboy model, reeks of derision for its intended audience. I can just see some cartoony executive signing off on it with a smirk, saying, "You know those moviegoers -- they'll buy a ticket to anything with tits and poo in it."

I've gone on record more times than I can count about how much I love looking at naked and semi-naked bodies, male and female, on-screen. And boy, do I enjoy a good poo joke. The problem with "Miss March" isn't that it disrespects women: It's that it disrespects poo and tits. The movie is the directorial debut of Zach Cregger and Trevor Moore, both members of the TV comedy-sketch troupe "The Whitest Kids U' Know." Cregger and Moore also wrote the script and star in the picture as, respectively, Eugene, an upstanding teen who has vowed not to have sex with his extremely sexy girlfriend Cindi (Raquel Alessi) until after marriage, and Tucker, Eugene's best friend, who beds as many babes as he can. His seduction technique apparently consists of staring at them, hard, with unblinking eyes and dangling his tongue out of his mouth like a wolf in a Tex Avery cartoon. (Always works for me.)

Eugene has an accident on prom night and falls into a coma. He's awakened when Tucker hits him on the head with a baseball bat, and shortly thereafter, because he's not yet fully in control of his body, he lets out a splat of cream-corn-style diarrhea. Further hilarity ensues when Eugene and Tucker hit the road, trying to get to the Playboy Mansion: Eugene wants to confront Cindi, who, he believes, abandoned him in his hour of need.

The road-trip format gives Eugene lots of time to mope and complain, and Tucker lots of chances to ogle cleavage. (His perpetual wet dreams come true when, while hitchhiking, the duo are picked up by a pair of buxom lesbians with Eastern European accents, who need someone to drive while they make mad passionate love in the backseat.) Some of this could, potentially, be funny. But in "Miss March," virtually none of it is, partly because of the total charmlessness of the two lead actors: What gaze, male or female, wouldn't drift toward stacked, good-looking babes, if the other option is spending 90 minutes parsing Cregger's dullard dopiness and Moore's Jim Carrey-wannabe mugging?

Only one gag consistently made me laugh in "Miss March": Craig Robinson appears as a DJ called Horsedick.MPEG, which is his full and proper name. (Anyone who dares to call him just "Horsedick" is met with an icy glare and a frosty "DOT EM-PEG!") But the other jokes -- including riffs on the earlier bowel-movement motif, and a sequence in which Tucker's epileptic girlfriend (played by Molly Stanton) suffers a seizure while giving him a blow job -- never achieve liftoff. They're the comedic equivalent of erectile dysfunction.

Also, if you're heading out to "Miss March" in the hopes of seeing naked boobies, you'll want to know that they're in relatively short supply: Most of the boobies here are encased in tight T-shirts or miniature halter tops, although it's easy enough to use your imagination.

It should also be noted that Hugh Hefner makes a cameo (although, as a critic friend sitting next to me pointed out, he never appears on-camera with any other character) and gives a sweet-enough speech about true love. But that speech makes "Miss March" even more loathsome: This is a picture made by people who think they can get away with crass jokes if they just proffer an ostensibly sweet message with it. It's a drive-through version of the genuine sweetness the Farrelly brothers used to give us with movies like "Shallow Hal." What's more, I'm baffled that Hefner would even want to be associated with this flaccid turkey. Tucker claims to worship Hefner, and at one point tells his idol that he's applied his "teachings and principles" to every aspect of his life. That could hardly be true of this semi-literate moron: When I was a journalism student in the early 1980s, I had teachers who cited Playboy as recommended reading, because at that time Hefner was still seeking out the best writers and journalists for his magazine. In the old days -- not, alas, today -- you could read the likes of Truman Capote, Margaret Atwood, Isaac Bashevis Singer and Marshall McLuhan in the pages of "Playboy." Hefner himself has said that if it weren't for the girls, he'd be remembered as the editor of a literary magazine.

You may be asking: Why beat up on "Miss March," a relatively small picture (it's being released by Fox Atomic, a division of Fox Searchlight) that isn't likely to become a bazonga hit like "Paul Blart"? It's broad comedy; it's not pretending to be anything else.

But the mere existence of "Miss March" should be treated as a cautionary tale. Broad comedy doesn't necessarily have to insult our intelligence. And if we're entering an age when depressed moviegoers are looking for fun, we still have the right to demand comedies into which someone has put some thought and care, instead of just assuming that, in our current dejected, addled, penniless state, we'll buy a ticket to any old thing. As a palliative to "Miss March," I suggest last year's "The House Bunny," starring the wonderful Anna Faris, a comedy with sly intelligence beneath its glossy surface. "The House Bunny" is the sexy librarian of so-called dumb comedies. "Miss March" doesn't even have what it takes to be their video clerk.