Caught in a Steele trap

Affirmative action, Republican-style, doomed party Chairman Michael Steele to failure before he ever took the job. 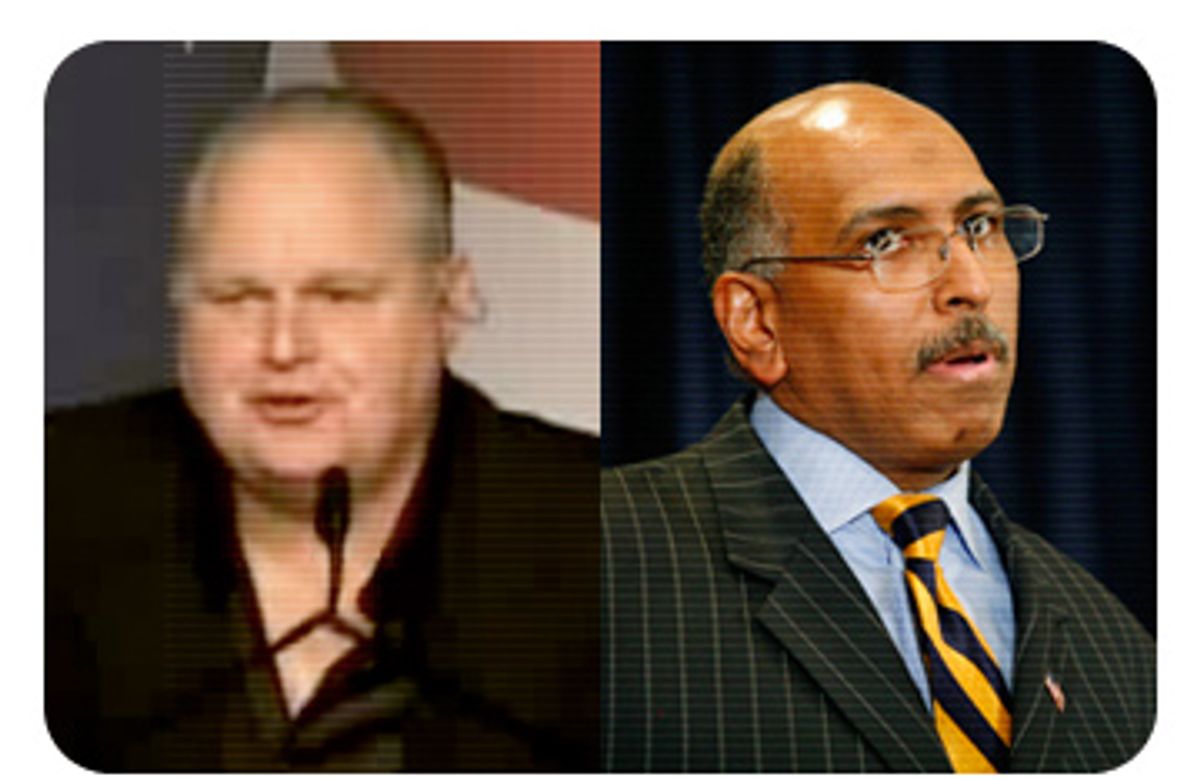 Pity Michael Steele. Even before he began to bury himself beneath daily gaffes, the imperiled Republican chairman was doomed to fail. He aspired to stand for a new, cool and refreshing conservatism, only to find that his party’s base and its top tastemaker, Rush Limbaugh, still prefer the old, bitter and nasty flavor.

Steele's ordeal should scarcely be surprising to anyone who has been paying attention to the evolution of the right over the past four decades. Conservatives and Republicans have long faced the same dilemma concerning issues of race, gender and sexual preference. Their habits of pandering to prejudice, which once seemed so advantageous, have eroded the brand badly and created a sclerotic image that is repellent to the nation’s young.

Pasting on a black face as political disguise is an old tactic that doesn't work so well anymore. It was a marvelous gag back when someone like the late Jesse Helms would hire an African-American in order to "prove" he wasn’t racist. It intimidated Democrats when the first President Bush nominated Clarence Thomas, an African-American whose sole qualification was his fidelity to rightist ideology. And it has certainly enhanced the career of many a black conservative elevated to prominence in the media or on Capitol Hill. Now the GOP reaps the consequences of cynicism as its latest black frontman pratfalls toward the exit.

But affirmative action, Republican-style, has also always imposed certain constraints on beneficiaries like Steele. For example, they were not permitted to speak out on behalf of their race, unless they were attacking Democrats or liberals. And they were certainly not encouraged to speak honestly about the likes of Limbaugh.

What did Steele mean, after all, when he described the Limbaugh show as "ugly" and "incendiary"? Why wouldn't the Republican chairman, or any other self-respecting African-American figure, feel that way about a radio host whose aired remarks are so replete with rancid racial comments?

While Limbaugh may or may not be a racist himself, he has never hesitated to indulge bigotry among his listeners -- sometimes in the whining tone of the victimized white male, but often in an aggressive skinhead style. Not long ago, he mixed up a cocktail of slurs to express his contempt for the man he calls "the magic Negro," complaining that we all have to "bend over" for Barack Obama merely because "his father was black."

Then again, Rush is the kind of compassionate conservative who cannot imagine why anyone would support aid to the genocide victims of Darfur except for "the color of their skin," which happens to match that of a certain Democratic "voting bloc" here at home.

Limbaugh’s catalog of slurs, both ugly and incendiary, dates back to the earliest days of his radio career, when he brusquely ordered an African-American listener to "take that bone out of your nose and call me back" and sneeringly asked, "Have you ever noticed how all composite pictures of wanted criminals resemble Jesse Jackson?" He once suggested that the NAACP, an American institution devoted to nonviolence and the rule of law, "should have riot rehearsal. They should get a liquor store and practice robberies."

His obnoxious remarks drone on and on in a depressingly long monologue that also targets other minorities, women, gays and so on. It used to be excused as "politically incorrect humor" but it was always just unfunny and hateful bilge.

Even Rush now seems to understand that he has a serious problem with women, who cannot stand him, yet he plainly has no idea what to do about it. He isn't quite Michael Savage, but he too voices the frustration of a diminishing segment of white males who cannot reconcile themselves to the social change of the last four decades.

For someone like Steele, who was hired to become the moderate and minority-friendly face of the GOP, the power of Limbaugh represents an insurmountable problem. He couldn't ignore forever the extremism and festering rage of the party base -- and they couldn't ignore forever his connections with centrist Republicans, his suspiciously moderate pronouncements on gays and abortion, and his past support for affirmative action and other policies that make them angry.

Steele's offhand remarks about ole Rushbo merely accelerated the inevitable, despite his groveling apologies. His chronic case of foot-in-mouth and his overall ineptitude have only justified the sense among his detractors that this was another case of affirmative action gone sour. But then why would a truly talented black politician -- such as a Barack Obama or a Cory Booker -- devote his life to a party that really doesn't want him?

Meanwhile the bad old habits die hard in the Grand Old Party. While a coup against Steele is reportedly brewing within the Republican National Committee, the first member to demand his resignation was a black state committeewoman from North Carolina named Ada Fisher. Is it a coincidence that Fisher supported Katon Dawson for the RNC chairmanship? Dawson is the South Carolina state party chair who belonged to a whites-only country club before he entered the RNC race last year. The runner-up to Steele in the RNC contest, he has now called for a special election to oust the man who beat him. Using a black woman as front to oust a black chairman may just be the latest evidence that the Republicans have yet to acknowledge the legacy of Lincoln -- or the realities of America in the 21st century.