Amy Adams washes up crime scenes and her troubled life in this quirky comedy-drama that could be the next oddball indie sleeper. 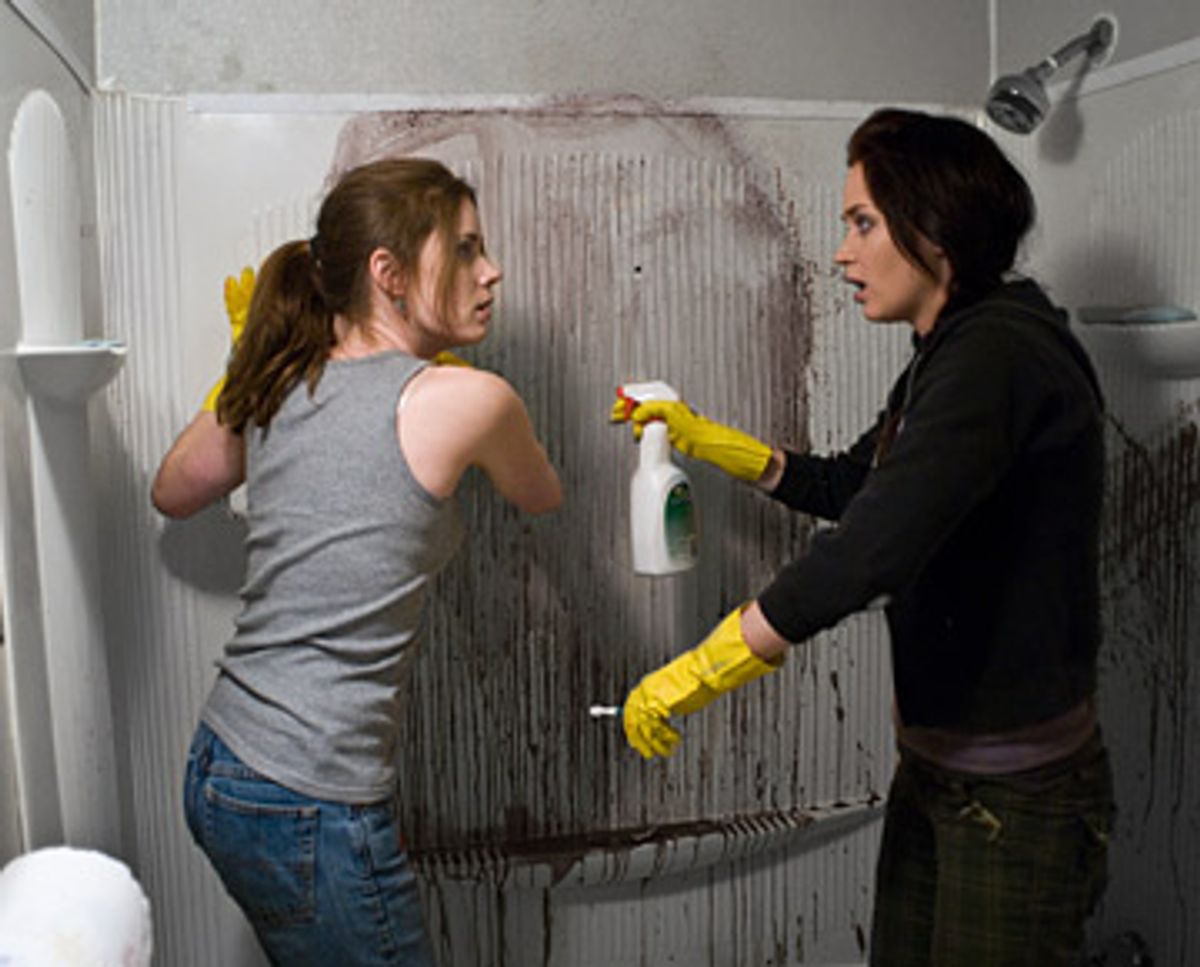 "Sunshine Cleaning" is one of those movies that appears to have been sprayed with a thin Sundancey coating as it came off the assembly line, giving it just enough of an indie glow to attract the moviegoer who's looking for that vague "something different" that isn't really so different. The movie wants so badly to be the next "Juno" or "Little Miss Sunshine" you can almost smell the desperation wafting from the screen. The ad campaign even touts the fact that it shares producers with "Little Miss Sunshine," so at least the studio releasing the movie, Overture, is being honest about its motives.

"Sunshine Cleaning" is something like "Little Miss Sunshine," in that its quirkiness has a facile, efficient quality. It has nothing of the openheartedness of "Juno" (a quality that softens even the aggressive cleverness of Diablo Cody's script). So how you'll feel about "Sunshine Cleaning" probably depends on your tolerance for slender, semi-hip comedic dramas about oddball families grappling with sometimes overwhelming problems.

Those kinds of movies generally make me want to jump out of a window, and "Sunshine Cleaning," even when it tries to wipe away some of the glossiness of its conceit to get at some raw feeling, is no exception. Amy Adams plays Rose Lorkowski, an exhausted single mom in Albuquerque, N.M., who cleans houses for a living; her son (played by Jason Spevack), a sweet if somewhat mixed-up kid, needs to go to private school, and she's wondering how she'll make ends meet. Rose feels she hasn't gotten very far since high school. Back then, she was a cheerleader, going steady with the captain of the football team. Now the football-captain dream guy, Mac (Steve Zahn), is a cop, and he and Rose still have a thing going on. But he's married to someone else, a classmate he chose over her, and that stings Rose, for understandable reasons. To bolster her sunken morale, she relies on little Post-it Note affirmations she's affixed to her bathroom mirror, Stuart Smalley-style slogans that reassure her she's in control of her life.

She's not, but she's a lot more together than the other adult members of her family, which include her sister, Norah (Emily Blunt), and her father, Joe (Alan Arkin). Norah, her sullen eyes rimmed with dark eyeliner, is ostensibly a grown-up, but she still insists on being something of a punky troublemaker. Joe, apparently, has never been very good at making money, but he's gotten even lousier at it as he's grown older. He's always coming up with wobbly business schemes that fall flat. His wife, Norah and Rose's mother, died long ago under circumstances that are revealed late in the movie.

One day Mac suggests to Rose that she could make a lot more money doing specialized cleaning jobs -- in other words, putting her skills to work at crime scenes, or in houses where people have recently died (a profession that also features in Charlie Huston's recent novel, "The Mystic Arts of Erasing All Signs of Death"). Rose doesn't much like the idea, but she desperately needs the money, and so she enlists Norah to help her. An early scene, in which the two women gamely go after a gruesome bloodstain with spray cleaner and little toothbrushes, has a dash of charm: Their chutzpah in the face of recent tragedy is touching.

But before long "Sunshine Cleaning" devolves into a not-very-deep drama in which Rose must learn to love herself and Norah must come to terms with the pain she's been carrying since her mother's death. The director of "Sunshine Cleaning" is New Zealander Christine Jeffs (who previously made the flawed but fascinating Sylvia Plath picture "Sylvia"); Megan Holley wrote the script. And although Adams and Blunt work hard at giving dimension to their characters, they can't overcome the fact that the story is essentially a greatest hits of family trauma. The dead mom, the capable sibling who tries to hold everything together at her own expense, the fragile sibling who's always relying on everyone else for help: Neither the actors nor the filmmakers can cut through those stock ideas to get to anything meaningful or moving. And the movie has one colossal opportunity that it simply blows. Clifton Collins Jr. -- the actor who so superbly played killer Perry Smith in "Capote" -- appears here as a guy named Winston, a nerdy cleaning-supplies salesman who treats Rose so kindly that there's little doubt he's the guy for her. The movie tiptoes right up to giving them an actual romance -- and then refuses to give us the payoff, as if doing so would make the story too predictable.

Which means that everything around the potential love story between Rose and Winston is dull and predictable, while a love story between them would at least be interesting and predictable. A filmmaker who simply trusted her instincts would know that, but Jeffs and Holley aren't following their instincts; they're following a plan. "Sunshine Cleaning" doesn't include Winston, its most likable and most human character, in its Snuggie of a happy ending. He's been washed away with the rest of the debris.