The battle of the boob

What's wrong with a controversial Atlantic Monthly article about breast-feeding? Plenty, say the editors of a new anthology. 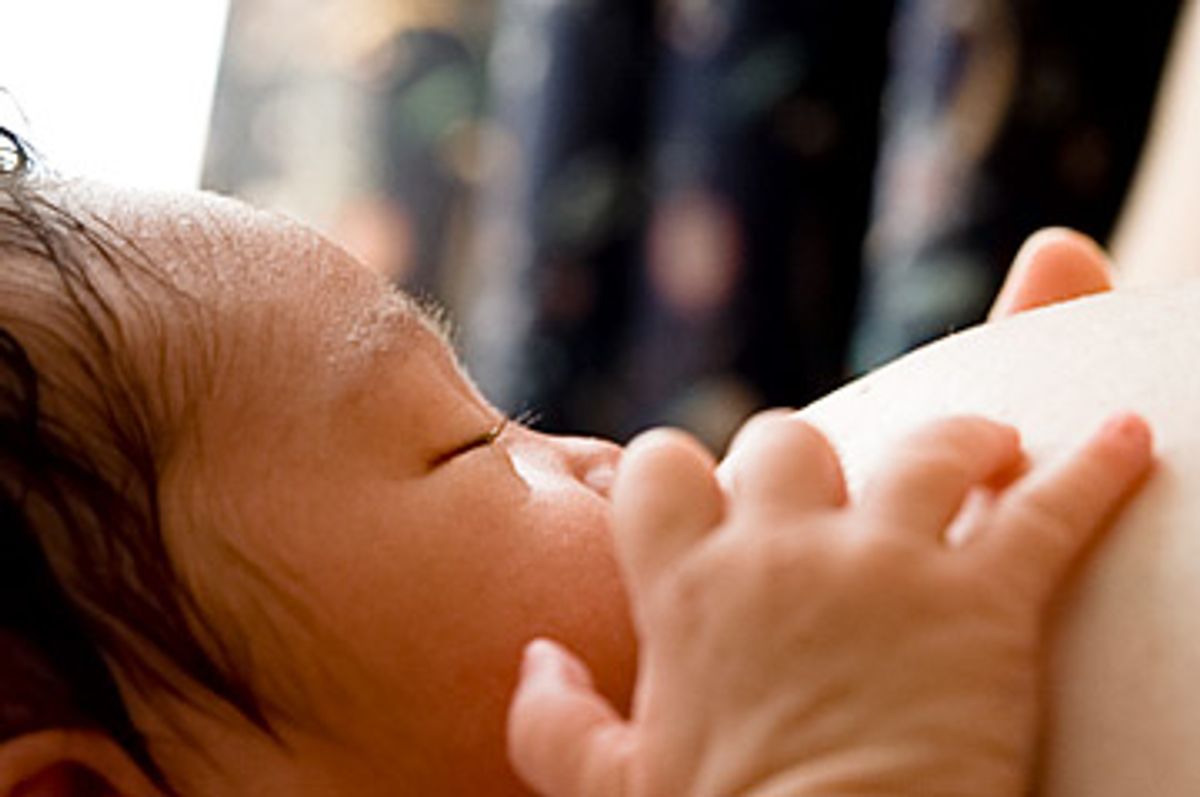 Ed. note: Hanna Rosin's recent Atlantic Monthly article, "The Case Against Breast Feeding," created quite the controversy by questioning the health benefits of breast milk as well as the prevailing wisdom that Breast is Best. Broadsheet asked the editors of an upcoming anthology about breast-feeding, "Unbuttoned," to respond to the piece.

When we read Hanna Rosin’s feature, she amused us with her interesting and witty observations. But we were also left wondering what her true objective was. Did she intend to knock breast milk's "liquid gold" status off its throne? Did she want to assuage guilt about her personal conflicts surrounding breast-feeding? Did she hope to make women think twice before judging one another for the parenting choices we all make every day?

We agree with Rosin that misconceptions surround breast-feeding. (That’s why we spent 18 months working on "Unbuttoned.") For too long, a lot of the attention has focused on the women who have successful breast-feeding experiences. Maybe it’s because some "winners" feel entitled to bragging rights. While "losers" (read: The ones who, thanks to societal pressures, have been made to feel as though they’ve failed) quietly recede, egos and breasts deflated, and (egads) go off to formula feed their children.

But where Rosin falls short is citing the "evidence" against breast milk’s role in preventing or reducing the risk of a host of illnesses in children, including ear infections, asthma, obesity and SIDS. She backs her claims up by a handful of medical studies from reputable journals, university researchers and other sources she refers to as highly regarded. She also tries to build a solid argument against the breast-feeding hype and hysteria that she believes has taken hold of U.S. women and breast-feeding advocates.

But the problem with the piece is that, on closer inspection, we have to conclude that her reporting is biased. She cherry-picked research that suited her agenda, the research suggesting that breast milk isn’t really all it’s been hyped to be. Yet between us we have interviewed dozens of highly regarded researchers and pediatricians who could offer a point-counterpoint to the research Rosin highlighted.

We also take issue with Rosin’s suggestion that the decision to breast-feed drives women out of the workforce. Our experience couldn’t be more different: We have friends and colleagues who hold positions of "serious power." They are doctors, lawyers, sales executives, television producers, writers and government lobbyists, and they all breast-fed for as little and as long as they wanted to -- with careers intact.

Rosin's damned-if-you-do, damned-if-you-don’t take on breast-feeding is a letdown. She, like so many other women, has every right to feel irritated, even pissed off, about the societal pressures to Do The Right Thing and breast-feed. But like it or not, there’s a lot of convincing evidence in support of breast-feeding. And like it or not, there are many really good reasons to breas-tfeed that have nothing at all to do with science. We’d argue that the same could be said of formula feeding.

As with most things in life, what ultimately works for one may not work at all for another. But at the very least we should remind ourselves of the common denominator here: As mothers, we’re all in uncharted waters and doing the best we can to stay afloat.