But a tepid Senate hearing on Wednesday, with no testimony from lower-ranking combat troops from Iraq or Afghanistan, does little to explain why. 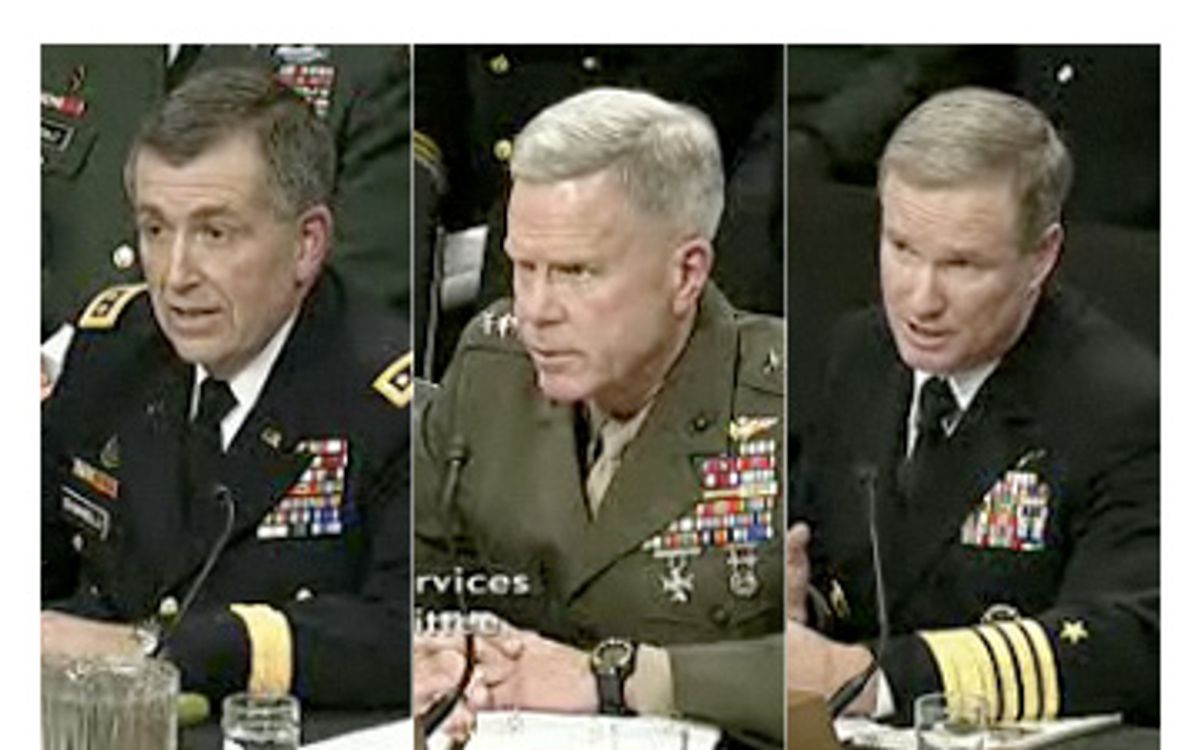 The Senate Armed Services Committee hearings Wednesday on the rising suicide rate among U.S. ground troops in Iraq and Afghanistan revealed some frightening new data, but did little to investigate the underlying causes of what is emerging as one of the darkest, most disturbing legacies of the wars.

Last year the Army had its highest suicide rate on record -- 140 soldiers. But new data from the Army on Wednesday showed the number jumping even higher. Forty-eight soldiers have already killed themselves so far this year. If that rate keeps up, nearly 225 Army soldiers will be dead by their own hand by the end of 2009.

A Senate hearing is an oddly sterile way to plumb the depths of this heart-wrenching problem. The soldiers overdosing in the barracks at Fort Carson or putting their M16s to their heads in Iraq are mostly lower-ranking troops, privates and specialists. But on Wednesday, the Senate only heard testimony from star-studded top military officials, such as Chiarelli, Marine Corps Gen. James Amos and Navy Adm. Patrick Walsh. There wasn't a private or specialist in the room, much less one who had attempted suicide who could tell the senators why he tried. Nor did Congress hear from any of the hundreds of frazzled, overworked and overwhelmed behavioral healthcare providers at Fort Bragg or Fort Campbell or any other base who seem ready to throw up their hands in frustration.

"The Army is taking a hard look at every single facet of our organization to make a determination on what can and should be done to address this problem," Chiarelli announced antiseptically.

A recent series in Salon revealed that soldiers returning from long tours in Iraq or Afghanistan suffering from combat stress were sometimes met with scorn from their superiors and something bordering on neglect from some medical officials. As their largely untreated problems deteriorated, their marriages unraveled under the strain. They turned to alcohol and drugs and in some cases saw no other way out than suicide.

Meanwhile, healthcare officials at various installations who are struggling to help say they're overwhelmed by huge numbers of troops returning from two, three or even four deployments with acute mental problems from combat.

Top brass in the military continue to be evasive about the problem, however. While some admit that combat stress may be a factor, others deny that seven long years of war with multiple deployments has anything to do with escalating suicide rates.

"We have been concerned that one outcome of the stress from operational deployments might be increased suicides," said Amos, the assistant commandant of the Marine Corps. "However, to date, we have not seen that hypothesis prove out," he added, noting that Marines with multiple deployments to war are not "overrepresented in the suicide population."

Rather, Amos pointed the finger at relationships."We have looked at the data to try to find answers that will enable us to address this needles loss of life," he said. "The most likely cause is a failed relationship with a woman," Amos said flatly.

Chiarelli, the Army vice chief of staff, inched toward admitting that war-related stress constituted part of the problem. "We are at war, and we have been at war for the past seven-plus years," he noted. "That has undeniably put a strain on our people and equipment," he admitted. "The reality is we are dealing with a tired and stretched force."

He quickly added that other factors, including marital discord, family disagreements, legal, financial and work problems, may have caused the spike in suicides.

Even without an Army private or healthcare worker in the Senate hearing room to pierce through the fog of data, the numbers themselves seem to blame combat-related stress. The Marine Corps, the other service besides the Army doing the grunt work in Iraq and Afghanistan, has also seen significant increases in the number of suicides over each of the past three years. Two-thirds of the Army soldiers who committed suicide had deployed to Iraq or Afghanistan. And while the suicide rates among the Army and Marine Corps ground troops reached an all-time high of around 19 suicides per 100,000 troops last year, rates in the Navy and Air Force have remained relatively flat at around 11.5.

The Army has implemented a "chain teaching" of suicide prevention for a 120-day period, according to Chiarelli. Army commanders along with their troops recently received a two-hour training session on suicide prevention and each unit also got a video on the subject.

But a behavioral health worker at a southern Army installation described her current job climate like a car repair shop, with every slot full in the garage and a line going down the block. I asked her if the new programs would stem the tide of suicides. "No," she answered.

History may not look kindly on the Senate's efforts to oversee the matter, either. "The committee staff of the Senate Armed Services Committee have been advised of the reasons for increasing suicides over the last four years," said Steve Robinson, a veterans advocate who has tried to alert the Senate of the problems while working for a number of advocacy groups. "They have had medical records delivered to them showing inappropriate care and cases of service members who have not received proper treatment," he added. "When they say they are mystified as to why suicides occur, it mystifies me why they don't understand and refuse to talk about what is really happening," he said. "This was not an honest assessment of why people are committing suicide."