Animal activists have denounced the delicacy as torture. But as a new book explains, the truth is not as simple -- or as sensational -- as they'd like you to believe. 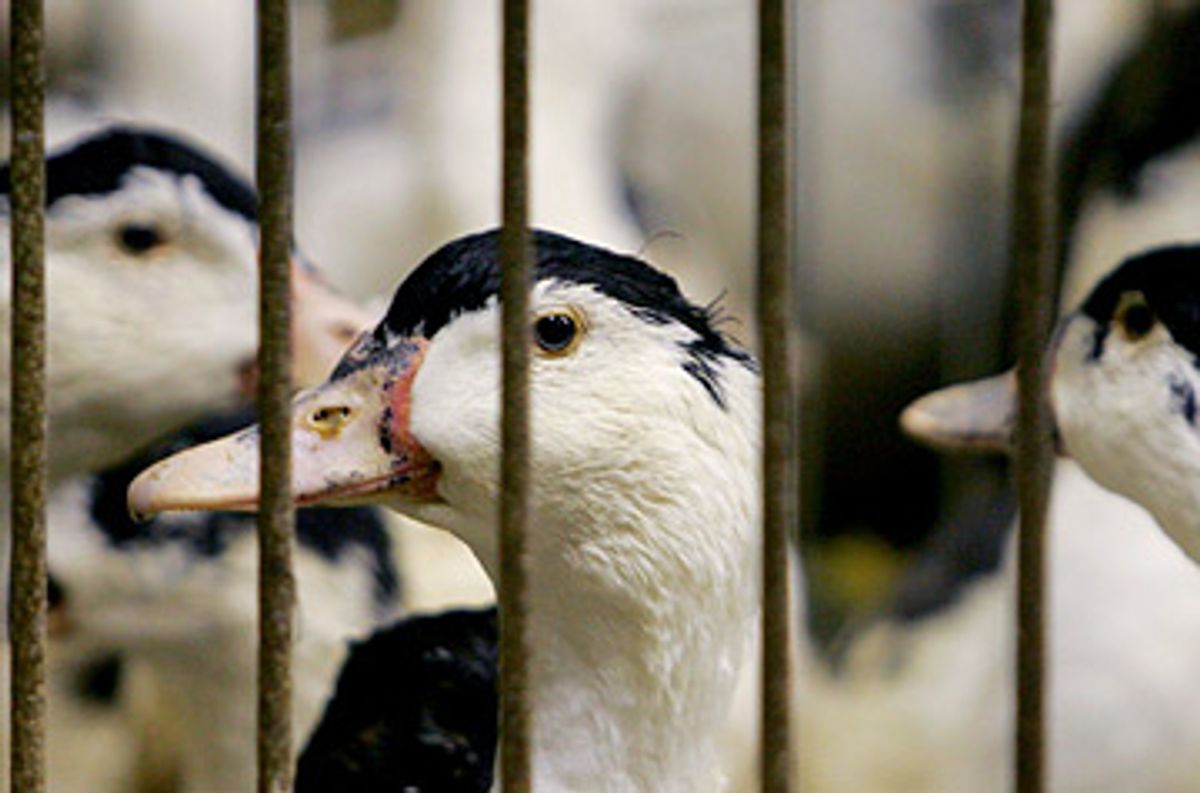 Whatever else you want to say about it, at least acknowledge this: Foie gras, the fattened liver of a duck or goose, is truly, indisputably, delicious. Roasted whole, pan-seared, combined with brandy and turned into a pâté, even poached, rolled in a dish towel and left to sit for a couple of days, the stuff just tastes good.

It's no secret; in fact, humans have known it for thousands of years now, ever since the ancient Egyptians -- who had noticed that geese that ate too much developed fat, tasty livers -- devised force-feeding techniques to speed the process along.

Still, none of that deliciousness matters (or, at least, none of it should matter) if, as animal-rights activists claim, the process of creating this delicacy involves torturing the birds. In fact, as the Chicago Tribune's Mark Caro writes in his new book, "The Foie Gras Wars: How a 5,000-Year-Old Delicacy Inspired the World's Fiercest Food Fight," even Izzy Yanay, the owner of Hudson Valley Foie Gras, the most famous producer in the U.S., believes that.

"The foie gras could be delicious, but if it's being produced with the torture of animals, it should not be produced. It should be banned, and I'll be the first one to close the farm if the duck would not be comfortable," Yanay told Caro in one of the book's more memorable quotes. "The fact that my neighbor is a child molester doesn't give me the right to do the same thing. People that have tried to help me, they always say, 'What about the lobsters? What about how chickens --' I don't care about the lobster or about the chicken! I do not torture the animals!"

Life would be a lot simpler for Yanay if everyone else saw it his way, but an increasingly large number of people don't. Hence the "wars" of Caro's book title, which he's in a unique position to document, as it was his March 29, 2005, Tribune article that sparked this country's most famous fight over foie gras, the one that resulted in Chicago's ordinance (since repealed) prohibiting restaurants from selling the dish.

If he bears any guilt over what his work wrought, Caro doesn't show it, although he doesn't particularly seem enthused about it, either. Instead, he uses that particular war -- which ended up accomplishing little save embarrassing Chicago -- as the jumping-off point for a tour of the world of foie gras, in which he visits with the farmers and chefs who produce and sell it as well as, most memorably, the activists who protest their doing so.

After all that, Caro ends up coming down on the side of the people producing foie gras, not the ones pushing to have it outlawed. His readers are likely to do the same, largely because that's the side supported by nearly all the available evidence.

That's the dirty little secret of all this controversy: The fight isn't between evil farmers on one side and pure animal lovers concerned about obvious torture. Actually, the anti-foie advocates are more like, say, advocates of abstinence-only sex education: The objective evidence isn't in their favor, and every time someone points that out, they tend to simply stick their fingers in their ears and start singing loudly.

There's no better example of that than Holly Cheever, a veterinarian who sometimes consults for one anti-foie group, Farm Sanctuary, as well as People for the Ethical Treatment of Animals. When she visited Hudson Valley, she didn't see the kind of unhealthy, cruelly treated birds she had expected. Her reaction? She says the farmers were hiding those ducks from her and that they do the same for any other visitors, like Caro or the Village Voice's Sarah DiGregorio, who went there for a recent article and came away convinced the ducks were not being tortured -- far from it, in fact.

It's undoubtedly true that some farms use inhumane methods, like caging the birds in tiny, individual cages that cause them pain and distress, but when foie gras is produced the right way (the way Hudson Valley does it, for instance) it's simply not torture. It's just a process through which humans take advantage of the duck's natural biology, which is very well suited to the kind of force-feeding involved in producing these fatty livers.

Despite what Yanay says, there is an appropriate comparison to be made to all the meat we eat on a regular basis.

Face facts: If you oppose foie gras, even if the only thing you've ever done about it is to make a dinner companion feel guilty, and you still eat conventionally raised meat, you're a raging hypocrite and a silly one at that. The eggs you ate for breakfast, the cheese that came on top, and the bacon on the side, all of it is produced using methods more torturous than the ones employed on a good foie gras farm. Animals on a typical farm these days are confined in spaces so small they can't turn around, much less do any of the things they'd normally do in nature. And in order to keep them at least somewhat healthy and functional despite those conditions, which tend to make them stressed and unhappy, their bodies are altered to keep them from harming themselves and their fellow animals -- chickens have their beaks trimmed, pigs and cows get their tails docked.

None of that would excuse bad practices employed in the production of foie gras, if indeed any were used. But the typical farm conditions do go to a deeper point, one Caro explores thoroughly in his book: These wars are not, ultimately, about foie gras at all. They're being waged by vegans who believe that all meat eating inevitably involves torture but who are smart enough -- and disingenuous enough -- to focus on a product the average person might never eat, one that can easily be portrayed as a decadent luxury enjoyed only by fat cats who could not care less about animals.

That's the saddest, and probably the most interesting, takeaway from Caro's book -- whatever these activists are doing, it's not really about caring for anyone, human or no. It's about purity, about the cause, and if factory farms get a free pass, if a few restaurateurs just trying to make a living have to be intimidated, if even their children have to be threatened (and they have been), then all that is just collateral damage.

Maybe those means could be justified if the ends were truly worth it. But they're not. The anti-meat activists can't very well persuade Chicago to ban beef or pork or chicken, so they focus instead on something easier, arguably to the detriment of general livestock. They're demonizing and hurting small farms that care about the health of their animals. Meanwhile, factory farms that do unspeakable things to the creatures in their care are let off the hook.