Would you abort a child just because it wasn't yours? 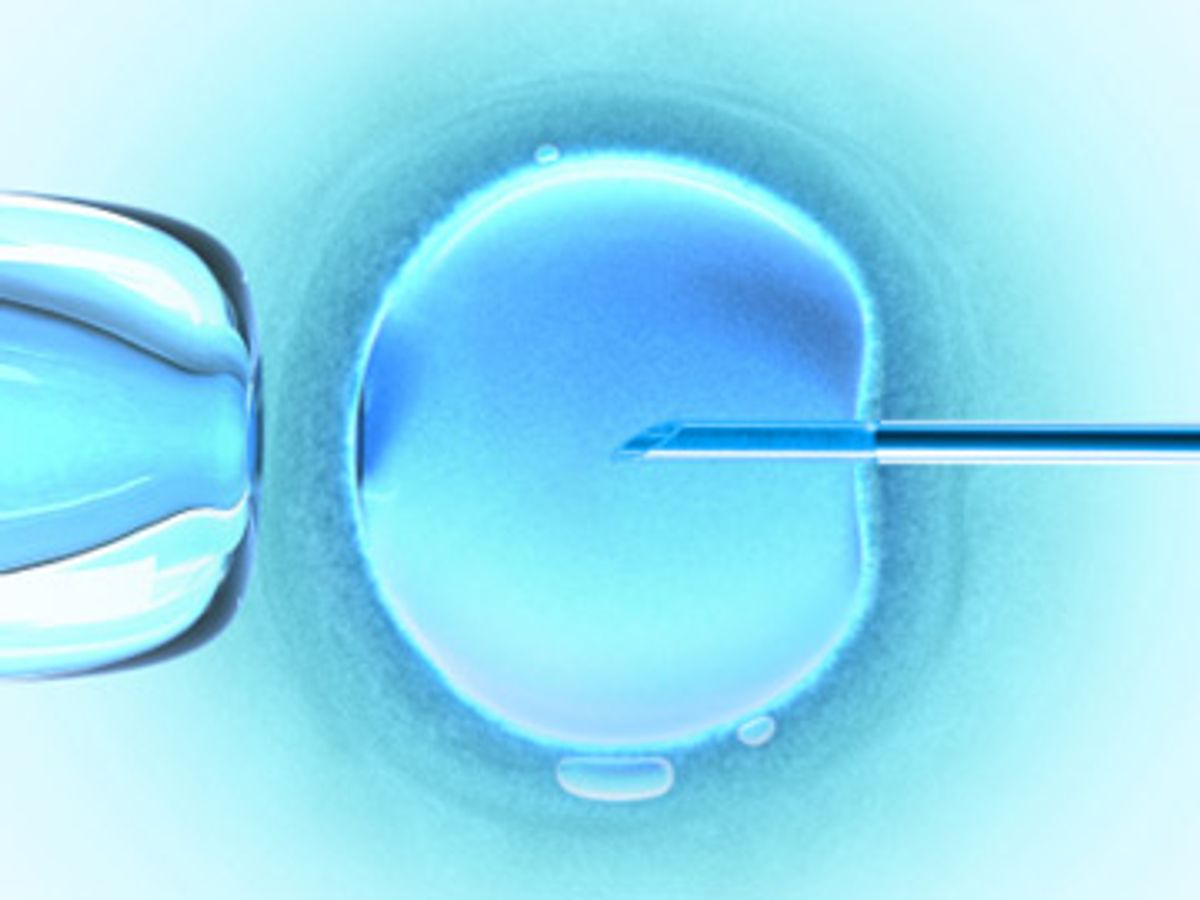 William Saletan's most recent column in Slate is a booby trap of sorts, expertly designed to make any person foolish enough to take the bait look like an ass while tripping all over themselves trying to justify a situation that from just about any perspective looks twisted and wrong. Saletan, who calls himself a "liberal Republican" and "pro-choice moralist" specializes in digging up the weirdest cases from the outlying frontiers of reproductive medicine and using them to call into question some of the most cherished precepts of pro-choice thinking. But I'm feeling scrappy -- or reckless -- today. So what the hell? I'm going to follow him down that rabbit hole anyway.

Here's his opening volley: "Would you abort a fetus just because it wasn't yours?"

You are supposed to stumble at that first line which, intentionally I think, evokes another, more common scenario: a man who discovers a child is not his. But wait, in what twisted universe is a woman pregnant with a child who is not hers?

The answer, of course, is the world of in vitro fertilization. The case that Saletan chooses to discuss is a particularly grim one in Japan in which a woman was implanted with three embryos -- two were the product of her egg and her husband's sperm; the third was (allegedly) the embryo from another couple undergoing treatment at the same hospital. When she became pregnant, doctors told her they suspected the child she was carrying was not her own. She and her husband decided to abort the pregnancy at eight weeks.

This isn't so much a test case for abortion as it is a medical ethics case. And it's flat-out appalling from any angle. But in asking readers to put themselves in the position of the woman who must decide whether or not to abort an embryo that is not her own, it's clear that Saletan's point is to call her morality into question. No one would argue with him that, from a pro-life standpoint, "the whole thing is grotesque." But he seems to think that this particular case should change the way we think about choice:

... from a pro-choice standpoint, it's agonizing. One woman who wanted a child aborted, in her own body, another woman's healthy, wanted child. It's generally understood that if you hire a surrogate to carry your embryo, she, not you, gets to decide whether to abort it. It may be your baby, but it's her body, and that's the legal trump card. A woman who's carrying your child against her will, as in the Japanese case, presumably has an even greater right to end the pregnancy. But what about you? You didn't sign a surrogacy contract. You made that embryo so you could give it life yourself. The doctor picked it because it looked like a good candidate to become a child, and the subsequent pregnancy proved him right. A healthy child, your child, was terminated without your consent, consultation, or knowledge. Is that right?

The agonizing part of this story is that two women went into a hospital, presumably after months and likely years of trying for a child, and ended up embroiled in some ghastly plot out of a dystopian sci-fi novel. But at the risk of sounding cruel and callous myself (and Saletan has stacked the deck so that it's difficult not to do so), the questions he raises have familiar, if uncomfortable, answers in any discussion on legal abortion. One would hardly call an embryo conceived in a Petri dish, then surgically implanted, an unplanned pregnancy. But it seems unnecessary, even cruel, to perform Saletan's sleight of hand by which a donated embryo becomes a "healthy, wanted child." (In another recent column, Saletan seemed to equate parents who left their unused embryos in cold storage to those who would ditch a full-term newborn in a hospital bassinet). And the uncomfortable moral truth is that every single pregnancy involves at least one person who may be genetically related to the embryo, but who, under current law, cannot ultimately compel a woman to carry it to term -- the biological father. Many men may find out that a woman has had an abortion without his "consent, consultation, or knowledge," and no doubt some of them find this agonizing. Does Saletan really mean to suggest that the situation is somehow worse when the person in this scenario is a woman? And does he think that this is some sort of special case that requires a different set of rules? Apparently so. He writes:

If you think this is an easy call, hang on: It gets worse. The woman who aborted the fetus was in her 20s. The woman who lost it was in her 40s. If the elder woman has since become pregnant, I can't find any record of it. Can you imagine losing your last chance at motherhood this way? What would you have said to the woman carrying your child, if you'd had a chance to speak to her in time?

What, indeed? Might you donate nine months of your life to be my unwilling surrogate mother? Will you take cash? Two weeks in the summer and every other Thanksgiving? Who knows what extraordinary lengths of generosity people of outlandish good will might go to for one another? One can imagine it making for some kooky screwball comedy, à la "Baby Mama," in which two couples who seem to have nothing in common learn they both know all the words to the same ABBA songs and agree to co-parent their kids together, or at least meet twice a month for pizza. (And calling attention to the age of the woman who "lost" the embryo is another low blow: Why would this particular embryo be a woman's "last chance at motherhood"? Why are we to assume she wasn't implanted at the same time? And why on earth does Saletan assume that she would wholeheartedly endorse the idea of her genetic offspring gestating in another woman's womb, with all the emotional and legal ramifications that would surely ensue?)

While there are certainly couples so moved by the first stirrings of embryonic life they would choose to see a pregnancy brought to term, no matter what the cost, it's not at all difficult to imagine there are many others who would be horrified at being forced to navigate this murky terrain.  Still, Saletan ends his piece with a plea: "Next time," he writes, "I hope the woman who conceived the embryo might get a chance to talk to the woman who decides its fate." I would not presume to know what the actual people involved in this case felt, but according to the original article on the case, the older woman "did not seem dismayed or upset" when she learned about the mistaken implantation, but later "expressed concern" when she heard the younger woman had undergone an abortion, saying, "I'm sorry to hear that." To me that sounds more like she was empathizing with another woman in a difficult situation, but that may be my own biases coming into play.

Clearly, every single person involved in this case  was put in an impossible situation. And yes, they all deserve some sort of restitution from the doctors who put them in this fix. But to pretend this case has something new to tell us about the way we think about abortion is to complicate unnecessarily some of the simplest bedrock precepts on which the legal right to abortion is based. Women do not have the right to choose because we are somehow morally superior to men: It’s all about the pregnancy, stupid. While some women do choose to selflessly bear children for others, most of them quite reasonably choose to go through nine months of pregnancy and deliver only the children that they fully expect to raise as their own. And just as some women may be persuaded to continue a pregnancy by their child's genetic father, or to, say, bear a child for another couple deemed to be more socially suitable to parent, I suppose some women might decide to go ahead and bear another woman's genetic child, and sort the rest out later. But she doesn't need anyone else's permission to choose whether or not to do so.