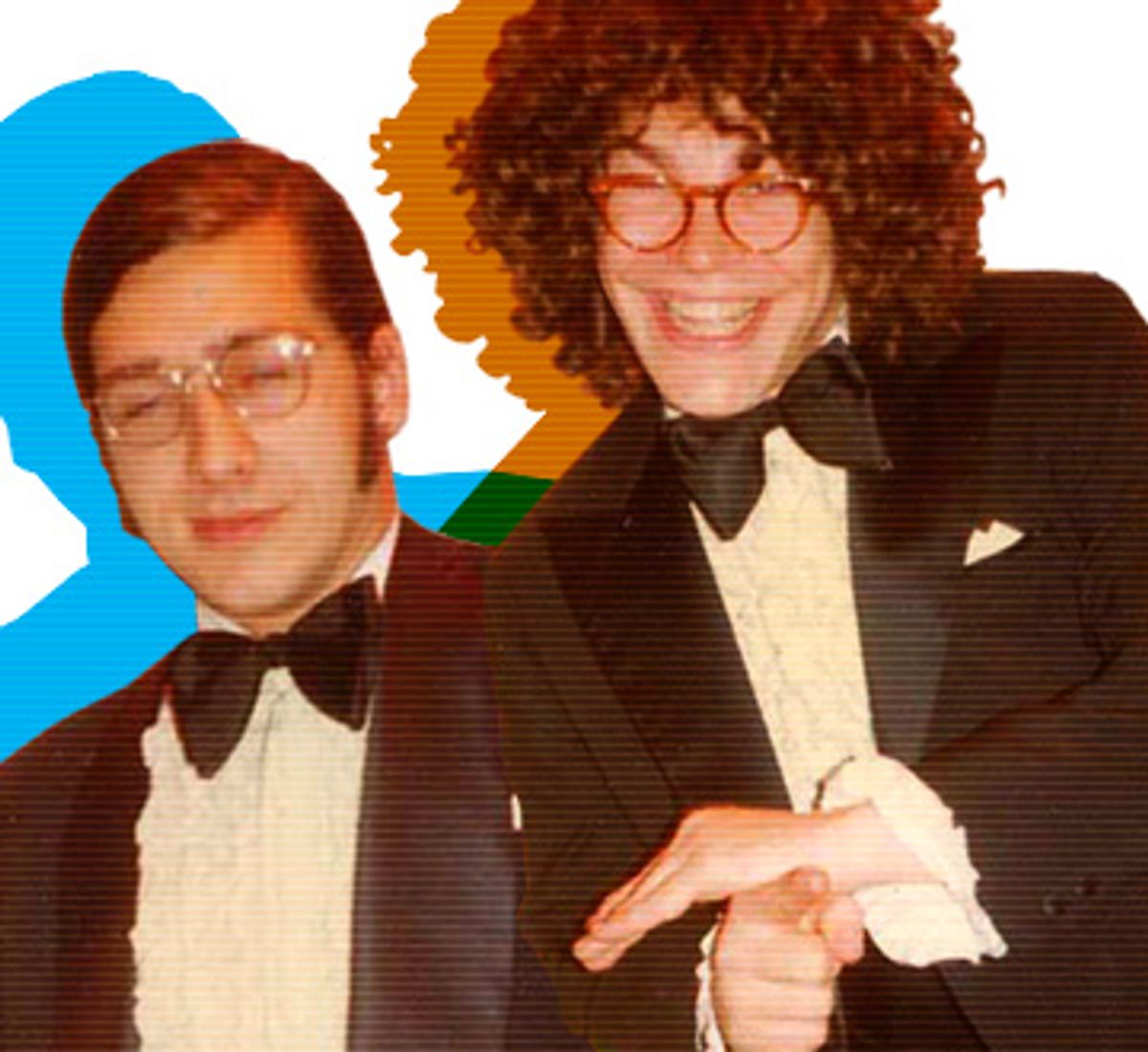 At this point "Saturday Night Live" has been around so long that for many of us, it's as much a habit as an institution, a thing we tune in to on most weekends with some vague hope that this week -- or this season, or this decade -- it might actually be funny. That it sometimes is funny, either for a sketch or two or for months at a time, is almost beside the point. The flexible format, the revolving cast, the fact that the show is done live -- an idea that was quaintly old-fashioned even in 1975, when the first episode aired -- all mean that, even in a weak season, there's always the chance we might see lightning caught in a bottle. "SNL" isn't selling comedy; what it's really selling is possibility.

But even possibility needs a form and a shape to be poured into, and no matter what "SNL" has become, anyone who ever loved the show recognizes that its early cast -- including John Belushi, Dan Aykroyd, Jane Curtin and Gilda Radner -- and the writers who helped shape those first few astonishing seasons set an almost impossibly high bar for their successors. Tom Davis was one of those writers, and his memoir, "Thirty-Nine Years of Short-Term Memory Loss," should win a truth-in-advertising award for its title alone. The book is sometimes charming and often scattered; Davis' recollection is sharp in places and maddeningly fuzzy in others. As a narrative, "Thirty-Nine Years" is probably about as cohesive as a toddler's recounting of the plot of "The Wizard of Oz," which is to say it's repetitive and somewhat disorganized. With that title, Davis has warned us that he isn't even pretending to give us a straight-ahead history of the show, à la Doug Hill and Jeff Weingrad's 1986 "Saturday Night: A Backstage History of Saturday Night Live," and it's a nonpromise he fully lives up to.

But even if "Thirty-Nine Years of Short-Term Memory Loss" is a book filled with memory blips and half-shaped anecdotes -- Davis owns up freely to having done his share of drugs over the years, and now lives, as the jacket-flap bio tells us, "alone in the woods of upstate New York" -- it's also an entertaining, pointillist account of what it was like to help shape one of the greatest comedy shows in television's history. Davis' book suggests that in comedy, it's imperative that you don't set out for greatness. Maybe great comedy comes only as a result of working really hard at fooling around.

And Davis would be the first to tell you that he fooled around a lot. He's probably best known as one-half of the comedy duo Franken & Davis -- the more or less forgotten half. Tom Davis and Al Franken met in prep school in Minneapolis in the late 1960s. As Franken explains in his foreword to the book, every schoolday began with chapel. The Blake School, as Franken notes dryly, began admitting Jews in the mid-1950s "to get the SAT scores up." But the tradition of chapel, including the singing of a Protestant hymn, persisted. Chapel also included announcements made by various groups within the student body, and one day Franken and Davis made one for the drama society. The kids loved it, and before they were even out of high school, the nascent comedy duo had begun performing at Minneapolis' Dudley Riggs' Brave New Workshop, a Second City-style theater founded in 1958, specializing in political and social satire.

The connect-the-tokes structure of "Thirty-Nine Years of Short-Term Memory Loss" sometimes makes it a little difficult to piece together exactly what happened when. But at some point in 1975, after Franken had gone off to and graduated from Harvard, and Davis, a college dropout, had wandered around the United States and India sampling, ahem, alternative states of consciousness, the two were brought to New York to meet with Lorne Michaels -- formerly a member of a successful comedy team himself -- who was putting together a comedy show and needed writers.

From that point, Franken and Davis, together and separately, wrote or helped write some of the finest and strangest comedy of the era, including Dan Aykroyd's 1978 turn as a bleeding-to-death Julia Child (the skit included the triumphant slogan "Save the liver!") and the cable-access-show parody "E. Buzz Miller's Art Classics" (inspired by a man Aykroyd and Davis met in real life), which featured Aykroyd as a self-styled art expert who titters over the name "Titian." As Franken & Davis, Al and Tom also appeared in their own spots on the show, among them "The Brain Tumor Comedian," a brilliant bit involving a bandaged, out-of-it Al Franken and the memorable punch line, unassumingly lovely by itself, "He only took tips!"

Davis has filled his book with reminiscences about the old days, some of them significant and some, well, not so much. In the book's livelier passages, he describes what it was like to be part of a group of people dedicated to working their asses off, just to get a few laughs out of people come Saturday night. As in any stressful workplace, "SNL" employees have to let off steam: Davis tells a story about how George Harrison came to visit Michaels in the office one day and distracted everyone by playing the piano. Franken, annoyed that no work was getting done but also, presumably, out of a sense of mischief, got up and slammed his office door. Harrison slunk out of the building soon thereafter. Davis also writes about sneaking into Michaels' office at 30 Rockefeller Plaza early one Saturday morning and watching in horror as one of his boss's favorite office gewgaws -- a battery-operated '50s toy television truck with the NBC logo on the side -- apparently "drove" itself off a window ledge, crashing to the street below. (Oops.) Michaels noticed the truck's absence first thing Monday morning and grilled the writers about it. Davis says he "didn't have the balls to tell him what happened," and Michaels kept his door locked after that.

Davis' book includes anecdotes about his upbringing in Minnesota (his dad was a strict, controlling character), stories about his various girlfriends and infidelities, and affectionate tributes to former friends and colleagues who are now gone. Those include John Belushi (when guest host Karen Black began breast-feeding her infant during a rehearsal, he quipped, "I'm next!"); the legendary, cantankerous writer Michael O'Donoghue, aka Mr. Mike, whose bits, including a "Starsky and Hutch"-style parody, complete with a voice-over intoning, "This week's episode: 'If He Hollers,'" often pushed the limits of good taste, as great comedy often does; and Chris Farley, whom Davis saw was headed for trouble and tried to help. ("You know you're in trouble when I'm the one intervening," he writes wryly.)

Reading "Thirty-Nine Years of Short-Term Memory Loss," you get the sense that Davis, like so many human beings, is a real sweetheart at times and sort of an asshole at others. The most tedious sections of the book may be the passages, scattered throughout, about Davis' friendship with Jerry Garcia. These accounts are interesting, to a point -- Garcia was a smarter, funnier guy than most "Grateful Dead" haters (I raise my hand here) probably realize.

But the book's Garcia sections -- as well as a chapter on acid guru Timothy Leary -- have too much of an "I used to hang out with so-and-so" quality, rather than an "I was there" definitiveness. And Davis' chief selling point is that he was there. Luckily, that's what he stresses in "Thirty-Nine Years of Short-Term Memory Loss." Franken and Davis both left "SNL" in the early '80s (although both would return later) and broke up, bitterly, as a comedy team in 1990. Now they've reconciled, if a bit tentatively: As Davis puts it, beautifully and succinctly, "I love Al as I do my brother, whom I also don't see very often."

In the time since that breakup, Franken went on to become a host on Air America Radio and now -- we hope -- is about to begin a new act as a Minnesota senator. Davis, as that jacket flap tells us, now lives alone in the woods. He notes that one night in 2004, he was watching "Jeopardy!" when he heard the clue "He was the comedy partner of Al Franken." "Everyone was stumped," Davis writes, with unself-pitying amusement, including Ken Jennings, the greatest 'Jeopardy!' champ ever."

Davis' book may be a little woolly at times, but it's very rarely sour. A few years before "SNL" was even conceived, Davis was trekking around the country, having just returned from a not-so-pleasant trip to India. In New York, he wandered past the art-deco glory of 30 Rock and thought, "What a magnificent structure for people to work in." That's a touchingly openhearted, appreciative sentiment, one made even more resonant by the fact that eventually Davis would land at 30 Rock himself, doing work he could be proud of. Making people laugh is among the hardest work there is. But as Davis knows, and acknowledges with the right amount of self-deprecation and gratitude, it's nice work if you can get it.