Julia Roberts is back! And in the charming Clive Owen, the actress has found a true partner in crime. 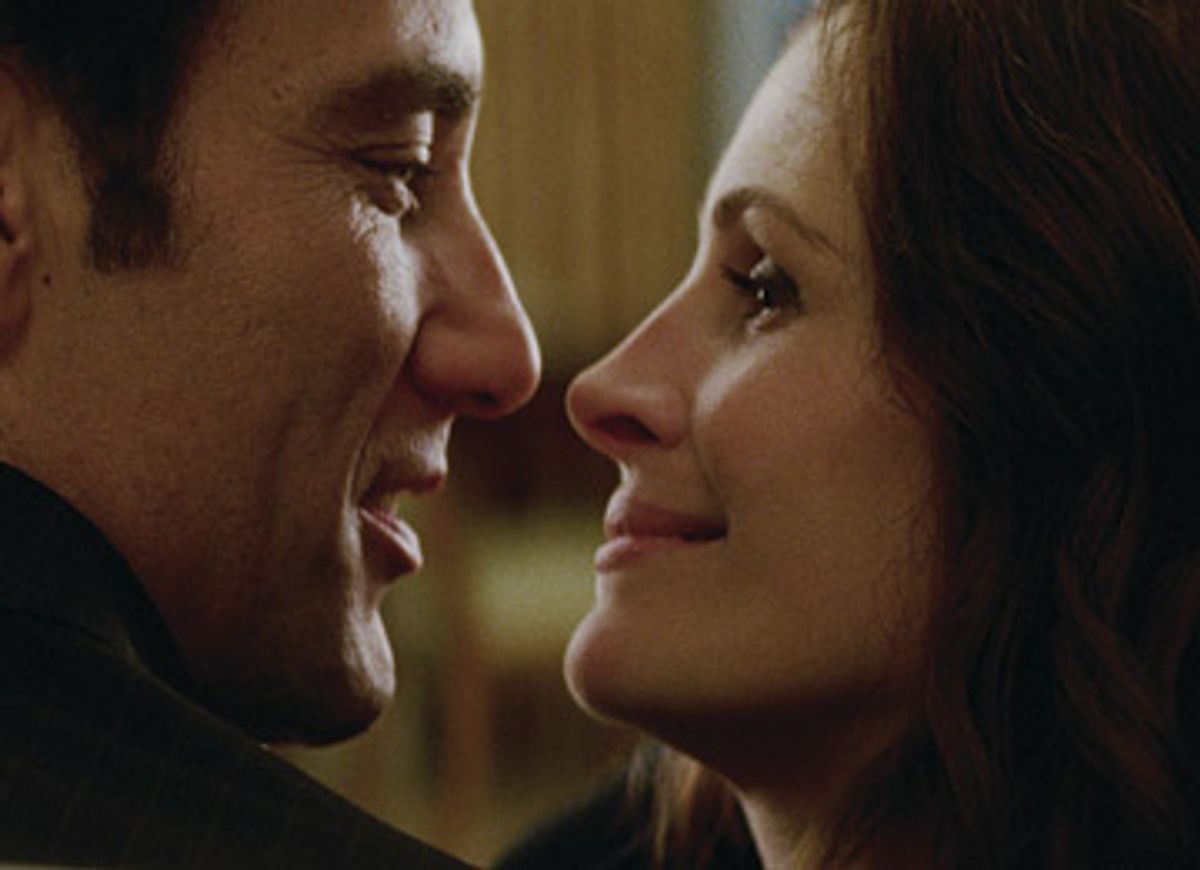 Tony Gilroy -- the writer of the "Bourne" movies and the writer-director of "Michael Clayton" and now the romantic caper "Duplicity" -- is supposedly one of the smartest screenwriters we've got. The bummer is that he's too tricky for his own good. In "Duplicity," Julia Roberts and Clive Owen play Claire Stenwick and Ray Koval: She's CIA, he's MI5, and when they meet at a July Fourth party in Dubai, it's lust at first sight -- until she drugs him, rifles through his stuff for valuable top-secret information, and slinks off into the ether, never to be seen again. Until, that is, the two re-encounter each other some time later and engage in a prickly exchange that suggests neither has been able to forget the other. "The last thing I remember before I passed out," Ray tells Claire, fixing her in the gaze of his unblinking bedroom eyes, "is how much I liked you."

"Drop dead," says Claire, though not in so many words. Now the two are employed by rival companies whose presidents can't stand each other. (They're played, respectively, by Tom Wilkinson and Paul Giamatti.) Each of the honchos knows the other is out to steal vital company secrets, which is why they need corporate spies to keep an eye on things. From there -- or maybe even before that -- Gilroy launches into a conspicuously noodly narrative filled with double- and triple-crossings and spiced up with the occasional bedroom encounter.

"Duplicity" begins brilliantly: For one thing, you've got clever banter between two classy, sophisticated characters played by exceedingly attractive stars. Gilroy also gives us a great comic moment very early on, when Wilkinson and Giamatti's characters engage in a slow-motion playground-style fight, punching at and grabbing one another with ludicrous inefficiency.

I started out loving "Duplicity"; by the end, I wanted to strangle it. Gilroy has tried to make a sophisticated adult entertainment, and Lord knows there aren't enough of those around these days. Gilroy wants to keep us thinking, and laughing, and by themselves those goals are admirable.

But the structure of "Duplicity" is its own worst enemy. In his efforts to keep us on our toes, Gilroy tosses in so many plot reversals that what he's reversing ceases to matter -- we know it's only a matter of time before he'll turn the tables again, and thus the plot's alleged slipperiness becomes just another kind of predictability. Worst of all, Gilroy saves the biggest twist for the wrap-up at the end, leaving the wrong characters -- and the audience -- stranded and screwed. The overall effect is one of convoluted slickness.

That's a bigger shame than Gilroy obviously realizes, because there's so much in "Duplicity" that's right. Shot by Robert Elswit, the picture has a luxe, sophisticated glow. The jazzy, grown-up score is by James Newton Howard, who for once has written movie music on something other than autopilot.

But the two biggest reasons to bother with "Duplicity" are its stars, Roberts and Owen. They're such a pleasure to watch that it only increases my frustration with Gilroy for not building a better movie around them. Owen probably doesn't know how to give a bad performance: Most recently, in Tom Tykwer's smart, intense thriller "The International," he played a troubled Interpol agent, bringing multiple dimensions to brooding and paranoia instead of treating them as flat, cardboard constructs. In "Duplicity" he plays another kind of secret agent, a swinging one, and the role gives him a chance to stretch out and play. Owen has a panther's stride; no matter what he's wearing, he always moves as if he's dressed in the most comfortable, well-cut suit in the world. His comic timing is breezy and elegant, and his banter with Roberts, at its best, achieves a kind of Grant-and-Hepburn syncopation.

Owen's scenes with Roberts are close to perfect: He's the partner she deserves. Over the course of Roberts' career, I've sometimes loved her and sometimes been bored with her. But "Duplicity" -- in which she plays her first leading role since Mike Nichols' 2004 "Closer" -- made me realize how much I've missed her. Roberts is commonly referred to as beautiful, but her beauty is far from the average kind: With that too-large mouth, those wide-open alien eyes, she looks like no other creature on earth -- and yet, paradoxically, she leaves no doubt she's a real person. Beauty takes work, but there's nothing about her that looks tinkered with or fussed over, and she makes the movie's dialogue seem equally casual and effortless. When Roy challenges her after a sexual tête-à-tête -- he thinks she's played him for a fool -- she waves her arms in the air and asks crisply, "What was the objective -- rug burn?"

Both Owen and Roberts are so good that I missed them desperately whenever they weren't on-screen, and that's a filmmaker's trick that can work if the surrounding distractions are engaging enough. Ultimately, though, Gilroy lets them down, and he lets us down, too. "Duplicity" ought to be filled with all kinds of delicious trickery. But we shouldn't be the ones getting duped.