Paul Rudd hugs it out -- and gives the finest performance of his career -- in this hilarious bromantic comedy about the unspoken codes of male friendship. 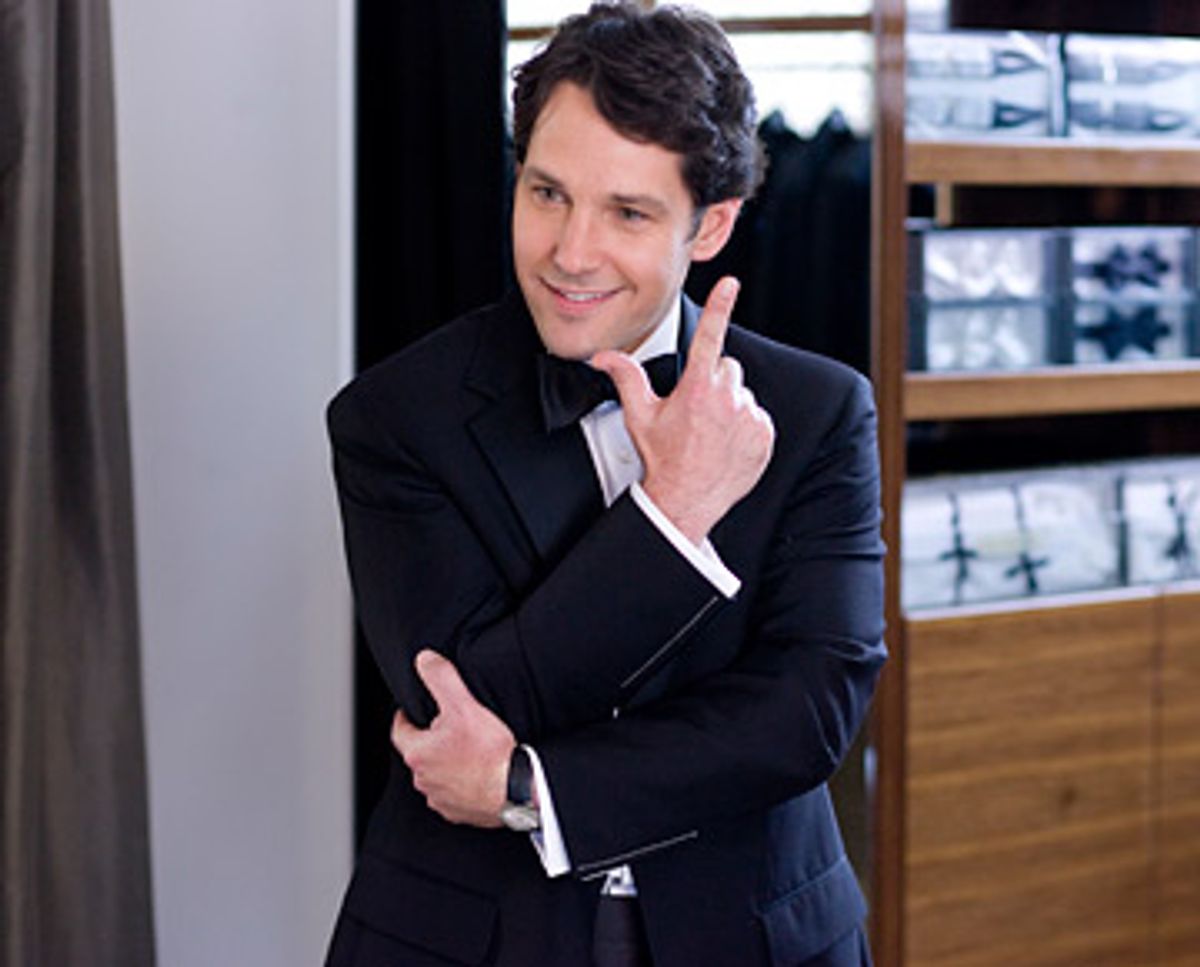 Anyone who thinks friendships between men can't be tricky and delicate things should heed the tragic tale of Jerry Lewis and Dean Martin, who, even before they went on to make ridiculous (and sometimes ridiculously enjoyable) Hollywood movies, were the most successful live comedy act of their era, rock stars before the notion of rock stars even existed. To watch Martin and Lewis in the early 1950s (DVDs of their work on the Colgate Comedy Hour are readily available, and worth checking out) is to see two performers so wholly in sync, so appreciative of each other's strengths and quirks, that they seem closer than brothers -- maybe even closer than spouses. As Lewis explains in his superb 2005 memoir "Dean & Me: A Love Story," Martin and Lewis played their last show together on Tuesday, July 24, 1956, at the Copacabana in New York, 10 years to the day after they'd become comedy partners. "When I awoke on Wednesday afternoon," Lewis writes, "I understood how an amputee must feel."

Now the idea of close friendship between straight men has its own handy identifying catchphrase, "bromance," a jocular, self-effacing way of describing close buddyhood -- the kind of bond shared by George Clooney and Brad Pitt, or Matt Damon and Ben Affleck -- that protects the parties involved from any perceived emasculation. The term is the equivalent of two pals' sitting one seat apart from each other in the movie theater, just so everyone knows for sure they're not gay.

But the marvelous thing about John Hamburg's new comedy, "I Love You, Man," is that rather than conforming to fit into (or make money off) some preexisting trend, it recognizes and even exalts in the reality that close male friendships can be a source of confusion and awkwardness. Paul Rudd plays Peter Klaven, an almost-successful Los Angeles real-estate agent who's more comfortable with women than he is with men: You can see it in the way he teases and jokes with his woman co-workers, who all seem to harbor, for good reason, a platonic mini-crush on him. But shortly after he asks his girlfriend, Zooey (Rashida Jones), to marry him, he realizes that he doesn't have any close male friends -- he's more comfortable making root-beer floats for Zooey's "girls' night" gatherings than he is chugging brewskis with the guys. After trying, and failing, to retrofit some of his male acquaintances into the best-buddy mold, and after a few disastrous attempts at recruiting brand-new pals, Pete falls into a sort-of friendship with a tall, schleppy charmer who shows up at one of his open houses just to eat the free food. Sydney (Jason Segel) is an easygoing but eccentric truth-teller dressed in mismatched bachelor duds: He lives in a tiny cottage fit for a he-man, stuffed with televisions, guitars, amps and assorted other guy playthings. It's love, sort of, at first sight.

"I Love You, Man" isn't a comedy about a weirdo with boundary issues, along the line of "The Cable Guy." Instead writer-director Hamburg (who previously directed the misshapen, undercooked "Along Came Polly," and co-wrote both "Meet the Parents" and "Meet the Fockers," hardly paragons of subtlety) focuses on the unspoken codes of male friendship that few people -- male or female -- ever think about. I doubt most women give much thought to how friendships develop between men, and if you ask, you usually get an answer like, "We just sat next to each other in the cafeteria one day in the 7th grade, and we've been friends ever since." But it can't always be that easy. How does a guy make friends when he's just moved to a new town? How do you call another guy up and ask for what is essentially a platonic date? As Pete's brother (played by Andy Samberg), who's gay and works as a personal trainer, tells him, "Hooking up is easy. Making platonic male friends? Not so much."

Hamburg explores that idea in some novel ways that play off our expectations: He gives us a version of the stock movie montage in which a lonely, single person looks around and sees nothing but people in love -- only in this case, Pete sees guys on the street slapping each other on the back, or groups of carpooling dudes laughing uproariously at one another's jokes. Pete tries to join in, casually, and gets nothing but dirty looks in return. When he asks a bunch of male acquaintances if they'd like to "get some grub or grab a beer," the words tumble from his lips as if it were his first time attempting to speak a foreign language.

So Pete is understandably relieved to meet Sydney, whose business card suggests he's in finance although he seems to spend most of his days loafing around Venice Beach in surfer shorts and Uggs, often with his dog (whom he's named Anwar Sadat, citing a strong physical resemblance between the two) in tow. Sydney is an unusual guy, all right: He allows Anwar Sadat to relieve himself anywhere and everywhere, and bullishly threatens any bystander who dares call him on it. A corner of his bachelor pad is specially equipped with a selection of condoms and a giant jug of hand lotion. (Don't ask -- although you probably don't need to.) But he also comes off as something of a gentle soul, and he and Pete have a good time when they go out for drinks and fish tacos. Pete and Sydney have, as they say in the dating world, hit it off, but the rules of romantic comedy apply to straight men, too: We can't be sure it's a match made in heaven until the very end.

Segel is better as a second or third banana than he is as a star. In "Forgetting Sarah Marshall" (which he also wrote) he had the requisite regular-guy schlubbiness, but he was conspicuously lacking in charisma. He's more relaxed, and much funnier, in "I Love You, Man," and his character allows for both inexplicable idiosyncrasies (why does this guy appear to be wearing a too-small woman's cardigan over a T-shirt?) and genuine sweetness -- Sydney may be a little odd, but he has a heart of sterling, if not gold.

In "I Love You, Man," some good comic actors (like Jon Favreau and J.K. Simmons) have small roles but get the most out of them. The women here are secondary characters, and they're exaggerated -- perhaps too much so -- just to score comic points. They squeal and squeak at one another as they leak all kinds of secrets that ought to be private: "He goes down on you, like, six times a week!" one of them says when she learns of Peter and Zooey's engagement. (She doesn't know she's on speakerphone and Peter can hear the whole thing.) But Hamburg isn't out to make women the villains -- they're hardly even the mysterious "other," because Pete gets them so much better than he understands his fellow guys.

This role is perfect for Rudd, a terrific if often underappreciated actor, and he's the movie's killer not-so-secret weapon. Rudd's timing has always been good, but in "I Love You, Man" he gives the finest performance of his career, breaking his comic beats down into weird and wonderful fractional increments. It's as if he's invented a new comedy dialect.

Pete is a naif in the world of regular guys -- he's as confused as women are when they try to communicate with these fascinating but befuddling creatures. Trying to learn their language, he riffles through his brain and can't seem to locate the appropriately masculine expressions. He leaves a long, rambling message for his potential guy-pal that ends, "Hope you have a great day! OK! Bye now!" He conjures the long-lost spirit of Gidget when he says cheerily, "I'll see you in a jiff!" In the presence of other men, he loses whatever cool he's got. While he's trying on wedding tuxes, Sydney tries to coax him into affecting a James Bond pose. After a few tries, Pete gets it right -- almost. He crooks his elbow, holding aloft an imaginary pistol. "The name's James Bond." He waits a beat before adding, helpfully: James Bond."

Rudd has always been an endearing actor (in "Clueless," especially, he was the kind of guy women wanted to squeeze and take home), but in more recent roles, like those in "Anchorman: The Legend of Ron Burgundy" and "Knocked Up," he's had more of a chance to show his deadpan, devilish side. In "I Love You, Man" he brings everything together, and it works perfectly. The movie features a projectile-vomiting scene whose kick lies not in the flying puke itself, but in the look of shame that shadows Rudd's face afterward. In "I Love You, Man," he gives his all -- and then some.