Will the cylons triumph? Will Baltar and Roslin survive? All these answers and more as the celebrated science-fiction epic comes to an end. 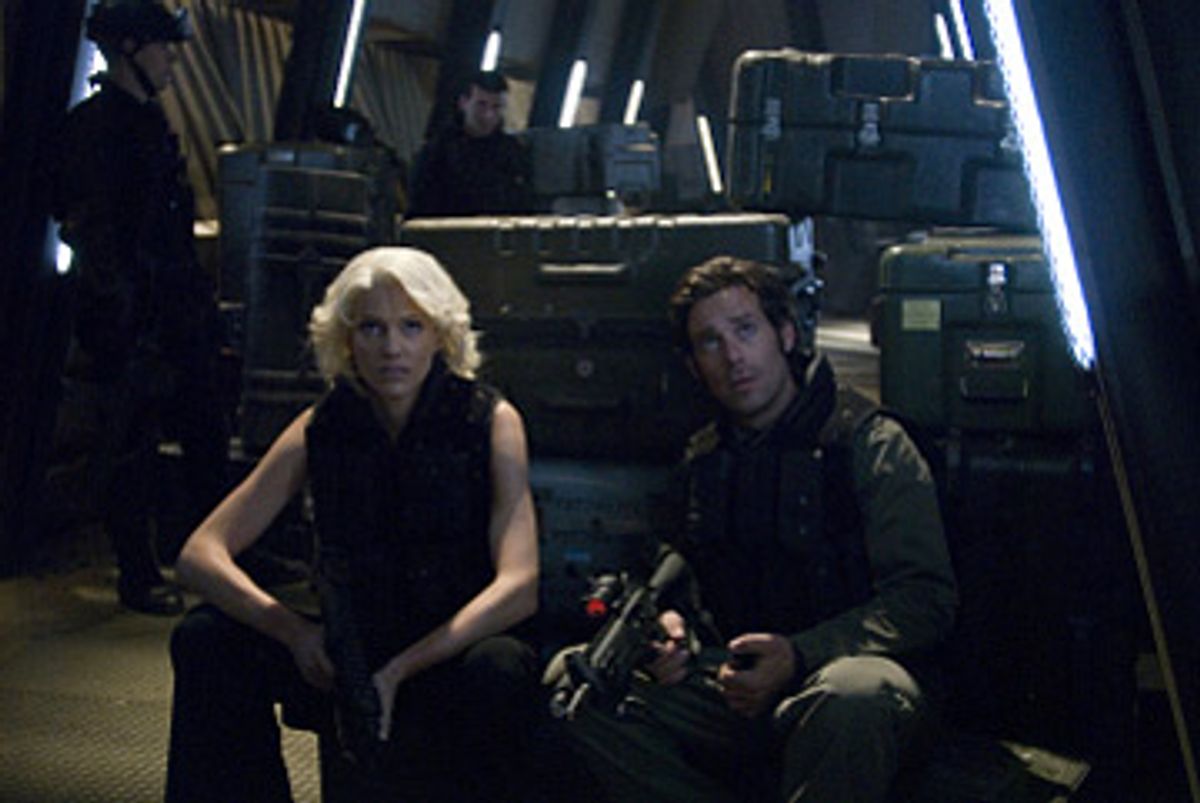 It must have been cosmic irony: As the wandering tribes of "Battlestar Galactica" finally arrived on Earth (well, Earth II, but still), the series itself never felt more disconnected from solid ground. Main plots and subplots zeroed in on their resolutions, questions big and small were answered, tantalizing references to "destiny" made in earlier episodes finally paid out, and even God's plan for Dr. Gaius Baltar -- the existence of which always seemed so improbable -- was at last made manifest in a crucial showdown on the blood-soaked floor of the CIC. It was all very epic and mystical and tidy and morally straightforward: in other words, not much like the "Battlestar Galactica" we've come to know and love.

This year's half-season began in an existential funk, with humanity's remnants and their cylon allies poleaxed by the discovery that Earth, the planet they'd spent the whole series chasing, had been rendered a smoldering, toxic wasteland by its previous residents -- who, to add insult to injury as far as the humans were concerned, turned out to be cylon skin jobs. You had to sympathize with the show's writers: No narrative twist could equal the end of Season 2, in which Baltar was elected president, the refugees foolishly settled on New Caprica, and suddenly it was a year later and cylon centurions were striding through the bedraggled little settlement in a scene that was a frank citation of the Nazis marching into Paris. After you've dared to flip the premise of your show entirely, what can you do next to upend your audience's expectations? Allowing the characters to find their ultimate goal and then making it really, really suck was pretty much the only card left to play.

And then where do you go? There was way too much wallowing, weeping and 'splaining in this season, but things did briefly return to form in the two-episode mutiny arc. That was "Battlestar" at its best: the "good guys" (Roslin and Adama) were compromised by their semi-dictatorial high-handedness while their antagonist, Tom Zarek, was conversely doing the right thing for the wrong reasons. As for his co-conspirator, Felix Gaeta, would he have been driven so relentlessly to the brink if not for a maddeningly shoddy prosthesis and the humiliation of staggering around the Galactica like Captain Ahab without a whale? That peg leg was like the proverbial nail for want of which the war was lost. Exquisitely played by Alessandro Juliani, Gaeta has long been one of the series' most intriguing minor figures, a man who disastrously combined the best of intentions with the worst possible judgment of character.

Then again, the true colors of Tom Zarek were difficult for anyone but Roslin and Adama to discern -- until, that is, he finally went Stalin and massacred the Quorum. "Battlestar Galactica" made itself distinctive with moments just like that one, drawing its events and dilemmas from 20th-century history rather than the moral simplicities of space opera. When Roslin's swearing-in echoed LBJ's, when she and Adama hovered on the brink of fixing the election, when Starbuck tortured Leoben and the human insurgency resorted to suicide bombings to resist cylon rule, the show became electrifying, frank about the predicaments of the present in a way that a TV drama about the present could never be.

It wasn't just that "Battlestar Galactica" dealt with "issues" -- "Star Trek" did that, in its own pat, right-thinking liberal way. It wasn't even that the series was "dark," in the callow sub-noir fashion of a Zack Snyder movie. What "Battlestar Galactica" showed us over and over again was just how hard it is for real, complicated and contradictory people to find their way in a universe that offers them one impossible choice after another. It refused to provide any easy or obvious solutions. Should Roslin and Adama have fixed that election? If they hadn't, then the Baltar presidency, the settling of New Caprica and the cylon occupation would never have happened. Hundreds of lives would have been saved. You can understand how the two of them must have lost their faith in democracy and ethical rectitude as the result of the New Caprica debacle. But from that loss of faith, the slow creep toward despotism began. By the end of the series last night, the political legitimacy of the Adama and Roslin regime had almost withered away.

Adama was always the series' most conventional figure, the old-fashioned, admirable leader-hero that American popular culture typically insists upon. This also made him the least interesting character psychologically, but he was essential all the same; the rest of the survivors needed him as a fixed point, a star to steer by. Understandably enough, in moving their convention-busting story through its endgame, the show's creators decided to attack that final redoubt of certainty by dismantling Adama himself along with his ship. His best friend was a cylon, Earth was a bust, the woman he loved was dying and even the Galactica itself was crumbling -- talk about piling it on! Adama hit the sauce, prowled the corridors peering at cracks with a hunted expression (to the extent that Edward James Olmos exhibits any expression), and spent a lot of time sprawled on the floor, crying. This tactic backfired, making much of the final season feeling labored and maudlin. Take away Adama's strength, and there didn't seem to be much left to the guy. There's something to be said for never getting a glimpse behind a revered leader's facade.

Friday night's finale, at least, provided an Adama who'd snapped out of it. The first half of the two-hour conclusion offered a hearty serving of something else the creators of "Battlestar Galactica" supposedly didn't care about: action. The last-ditch assault on the cylon's colony by ramming it with the rattletrap Galactica was thrilling and gorgeous, providing a final showcase for the centurions, surely the scariest monsters on television. Then came 40 minutes of speeches about lessons learned and the need to "break the cycle," the naiveté of which did indeed feel like a break -- from the knowing, worldly stoicism that made "Battlestar Galactica" so refreshing to begin with. The last flash of that sensibility came when the corpse of poor Racetrack got knocked against the wrong button and wound up nuking Cavil's cylons to Kingdom Come just as everyone had decided to get along for a change.

Then we got to Earth, and saw one scene after another of people standing in green fields saying, "But what will you do now?" (And how preposterous was the idea of the survivors splitting up and forsaking all technology to go native? The first case of strep throat would have made short work of that vow.) Laura Roslin died with the heart-rending dignity that Mary McDonnell never failed to bring to the finest role of her career, and most of the other actors (James Callis, Katee Sackhoff, Tricia Helfer, Grace Park, Aaron Douglas, Tahmoh Penikett) got a final chance to remind us of just how good they are. The initially puzzling flashbacks to the pre-attack days on Caprica turned out to depict the key decisions that led all of the series' characters to the Galactica, and ultimately to the founding of a new human race.

It was the opposite of David Chase's famous non-ending for "The Sopranos," and it demonstrated that tying up every loose end also has its pitfalls. Granted, it can't be easy to cap off a serialized drama this avidly followed. On one hand, the audience craves resolution, answers to all the mysteries and prophecies and visions; on the other, "Battlestar Galactica" isn't "Lost," a comic-book epic in which the puzzles and their solutions are the main point.

What made "Battlestar Galactica" great was the uncertainty of its characters' condition; were they part of a divine plan, or pinging randomly around an empty universe? Was there a reason to be good, to be selfless, or was it every man for himself? How much of our better nature should we be willing to sacrifice in order to survive? How can we tell where our loyalties lie? They didn't know. We don't know. They were racing around in a spaceship fleeing killer robots, yes, but the ambiguity of their circumstances made them so much more like us than 99 percent of the people on television. It made them seem so real. When they got their answers, they became finally and irrevocably fictional.