It's time to reform offshore banking, and see what untaxed wealth big business is hiding in overseas tax shelters. 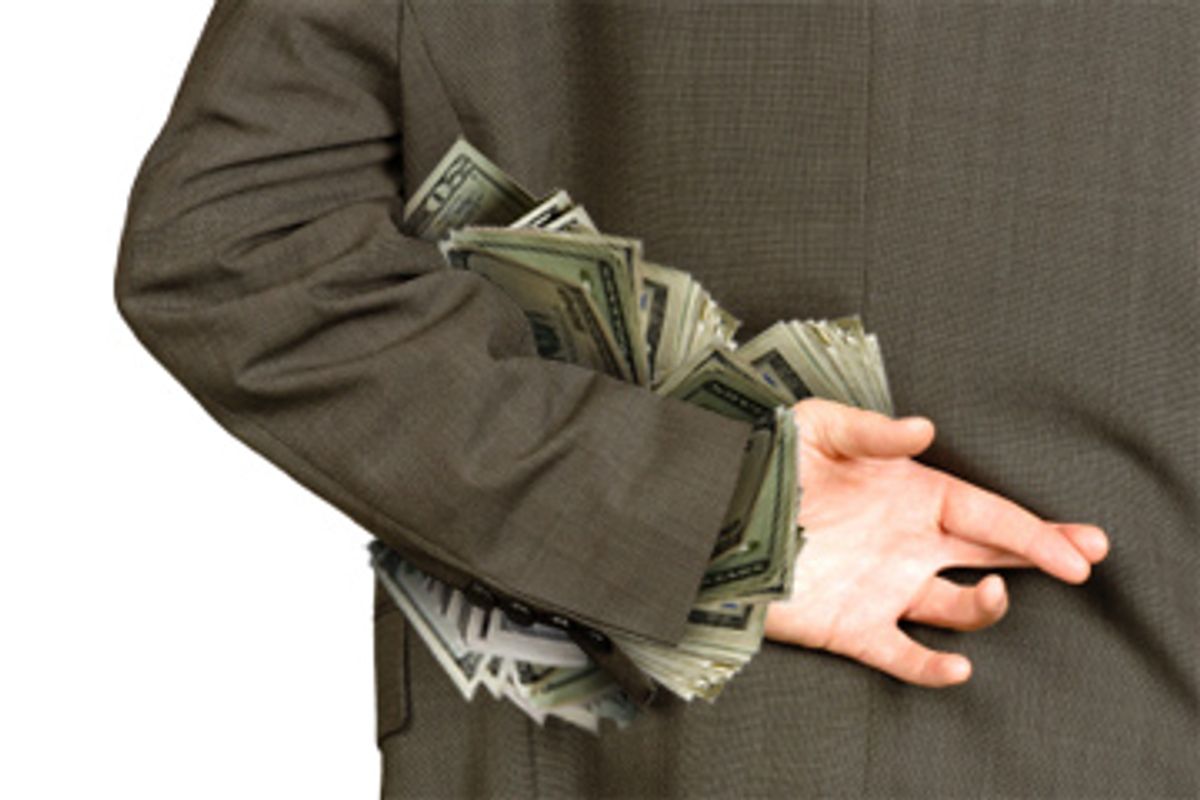 The popular urge to claw back the bogus bonuses paid by American International Group is irresistible and fully justified, but should the Treasury someday retrieve every single bonus dollar, that total of $165 million will make no difference to anyone except a few disgruntled traders. From the jaded perspective of the financiers, the uproar over the AIG bonuses may provide a welcome distraction from far more important (and lucrative) abuses in the world's offshore tax havens.

So rather than continue arguing over chump change, it is long past time for the United States, with its international friends and allies, to demand accountability from the long list of tiny countries and principalities, from Andorra and the Cayman Islands to Singapore and Switzerland, where corporations, wealthy clients and unrepentant evildoers hide their assets.

The big claw-back will reach into quaint islands and mountainous principalities, because the same banks, hedge funds and private equity firms responsible for the world financial meltdown keep their profits in those "secrecy spaces" -- alongside the ill-gotten gains of numerous drug dealers, dictators and delinquents of every description.

According to the Government Accountability Office, nearly all of America's top 100 corporations maintain subsidiaries in countries identified as tax havens. As the GAO notes, there could be reasons other than avoiding the IRS to set up branches in places such as Singapore, Luxembourg and Switzerland, where taxes are light or nonexistent and keeping clients' illicit secrets is considered a matter of national pride.

When the cost of these shenanigans was last estimated two years ago, the U.S. government's annual loss in revenue due to tax avoidance by major corporations and super-rich individuals was pegged at about $100 billion -- considerably more than a rounding error, even today. But of course that is only a rough assessment, as is the estimate of $12 trillion in untaxed assets hidden around the world. Nobody will know for certain until the books are opened and transparency is established.

Whatever the accurate accounting proves to be, it is certain to exceed hundreds of billions annually worldwide. That is money every country will need badly for years, to repay debt, finance reconstruction, and fund services, as the world economy struggles to revive itself. Even in the developing countries, where incomes are much lower and billionaires tend to be scarce, the annual revenue loss could be as much as $50 billion -- enough to meet the U.N.'s Millennium Development Goals (if only the money were not stolen by local elites and wired away to numbered accounts in tax havens).

None of these tax havens could exist without the connivance or at least the cooperation of the world's most powerful governments, which remain dominated by financial industry lobbyists even now. The Organization for Economic Cooperation and Development has sought greater transparency from the tax havens for years, hearing promises from most and defiance from a few.

But in reality almost nothing was accomplished until last year, when U.S. law enforcement authorities began to pursue Union Bank of Switzerland (UBS) executives with criminal indictments. The UBS probe led to a settlement last month that included a fine of $780 million and an agreement to provide information about tens of thousands of American clients maintaining secret accounts at that huge bank.

Over the past several years, however, the trend has gone the other way, with abuse of bank secrecy and the expatriation of investment and profits growing rapidly. On the tiny island of Jersey in the English Channel, for instance, the authorities responded to political pressure from hedge funds, which have placed more than $80 billion in deposits there, by establishing a "zero regulation regime" last year that literally removed all restrictions and reporting on financial transactions. Jersey's counterparts in Guernsey and the Cayman Islands responded by assuring the hedge funds that they, too, would consider abolishing all regulation.

Perhaps the UBS case indicates a change in that unwholesome trend and a renewed willingness on the part of American authorities to crack the tax havens -- which was not a priority, to put it mildly, of the Bush administration. As a senator, Barack Obama supported legislation to break open the secret financial regimes, by retaliating against countries and principalities that refuse to cooperate. Now Congress and the White House should pass such legislation and make breaking the tax havens a high priority in partnership with the European Union, the OECD and World Bank. They could start by threatening to outlaw transactions between American banks and financial institutions in any country that rejects new rules for transparency and reciprocal information.

If Americans want to make the authors of our misery pay up, then the auditors must go where the money is, as Willie Sutton might have explained -- and take hundreds of billions back.