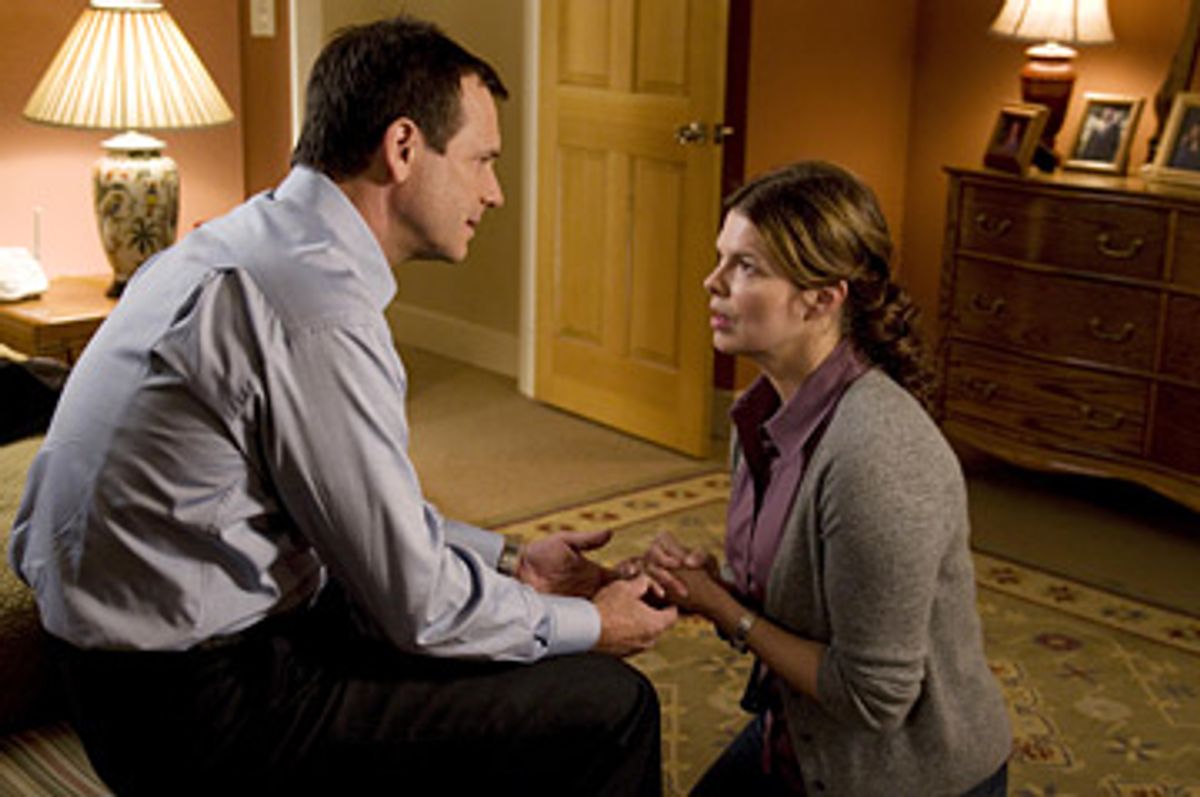 In its third season, which ended last night, "Big Love" finally became a little less coy about the biggest love of all, the religious faith that has gotten all of its characters into the situations that currently bedevil them. The most obviously weird thing about the Henrickson family is that it's polygamist, but over the past three seasons, the series has made a persuasive case for Bill and his three wives as an otherwise utterly normal suburban clan who would be contentedly toddling around in their minivans to barbecues, parent-teacher meetings and Costco if not for the weirdos (fundamentalist Mormons at the Juniper Creek compound) and prigs (conventional LDS Mormons) who persist in tormenting them.

With the series' controversy-stirring depiction of a secret LDS temple rite last week, the show stepped closer toward acknowledging the fact that religion, not marriage or sex, lies at the heart of the Henricksons' woes. Poor Barb, driven to the brink by the double-barreled conniving of Nicki and her own awful family, discovered she was about to be excommunicated from the LDS, and begged her mother and sister to help her visit the temple one last time. "This is just a foretaste of what eternity will be like!" rhapsodized her mother (the ever-masterly Ellen Burstyn), as the three women fluttered around what looked like the side lobby of a turn-of-the-century hotel, clad in gauzy wimples.

The goofiness of this scene makes the dilemma of "Big Love" manifest. Religion is a lot like sex in this: If you're not into it, it looks ridiculous. Barb, the series' most sympathetic, relatable character, finds the odd outfits and rituals of the LDS deeply meaningful, and the naked craving for peace and belonging on Jeanne Tripplehorn's face demanded that even the unbelievers in the audience allow her that. When two church elders, finding her unrepentant about her marriage, sever her from the rest of her family and church for all time, we must accept that all that matters is that Barb believes they have the power to do so. Unless we're willing to respect that belief (and it's taken three seasons to build that kind of relationship between Barb and the viewers), then everyone in "Big Love" just seems nuts.

Authority and where we find it was the theme of this season, and the key moment for the future came when Bill, having quarreled with Joey about how to hold Roman accountable for Kathy's death, falls through a hayloft and finds himself staring upward through a hole in the roof at the starry sky. The revelation that led Bill to embrace "the principle" of polygamy surely came at just such a moment, and when he returns to his own mini-compound, he announces the founding of his own church by dispensing a homemade communion to his gathered family in the backyard.

Bill had spent the whole season chasing after a letter, concealed by the church, that would, he believed, prove the "legitimacy" of polygamy; in an echo of a real-life forgery racket that preyed upon the LDS, it turned out to be a fake, manufactured by Roman. We learned that Nicki had long ago been put into the "Joy Book," a sort of marriage catalog that lists eligible teenage fundamentalist girls for old men seeking fresh wives, and sealed to a man she clearly hates. And gentle Joey finally reached the limit of what he was able to tolerate from Roman after the secular justice system utterly failed to bring him to account for his crimes. With so many of the Powers That Be proven false, ineffectual and abusive, you can't blame people for taking matters into their own hands; "We're in free fall, Bill!" Barb says, and so her husband decides to catch them all by himself.

In a way, Bill's choice was even more daring than Alby's abortive campaign to kill his parents. But it comes with a warning. Whatever message the cosmos sent to Bill in that barn, he's also acting on Roman's advice: "You have to take authority from God," he told Bill after delivering an ultra-creepy kiss. "I took it. I made myself." Smothered by Joey just at the moment he'd completed his transformation into an antediluvian unshelled tortoise, Harry Dean Stanton's Roman has at last been eliminated as the series' Big Bad. I'd bet serious money that Season 4 will show us Bill coming to resemble him in assorted uncomfortable ways.

That's a lot about Bill, though, when everyone knows that Chloë Sevigny owns "Big Love." Her Nicki got a taste of the excitement awaiting her in the outside world when her mother sent her to spy on the prosecution of her father. She found it intoxicating. Wouldn't it be grand if she were lured further out of her cocoon by the promised freedom to exercise her oversize will on a larger stage? Barb suggested last night that Nicki was a "sociopath," but she's really just a shark who's been absurdly transplanted to a fishpond. She needs a whole ocean to swim in.

Unfortunately, "Big Love" has recently shown a disappointing inclination to patly explain away Nicki's behavior -- the scheming, the histrionics, the spite and the sudden blossoming in moments of crisis -- as the result of her guilt at having been forced to abandon her daughter by her first husband. Meeting the girl again forced Nicki to do something unprecedented: admit she was wrong, apologize and confess her self-hatred to Barb. These are ominous signs that even this gloriously impossible woman will be forced to genuflect before the supreme idol of mainstream American culture: the family. "Your family should mean more to you than some church!" Margene chirped at one point last night, but truth be told, on TV there really isn't any difference between the two. Some authorities, it seems, can never be challenged.