Yes, the treasury secretary's fix-it plan sounds like something his predecessor Hank Paulson could have cooked up. With one key difference: It actually exists. Maybe we should give it a chance. 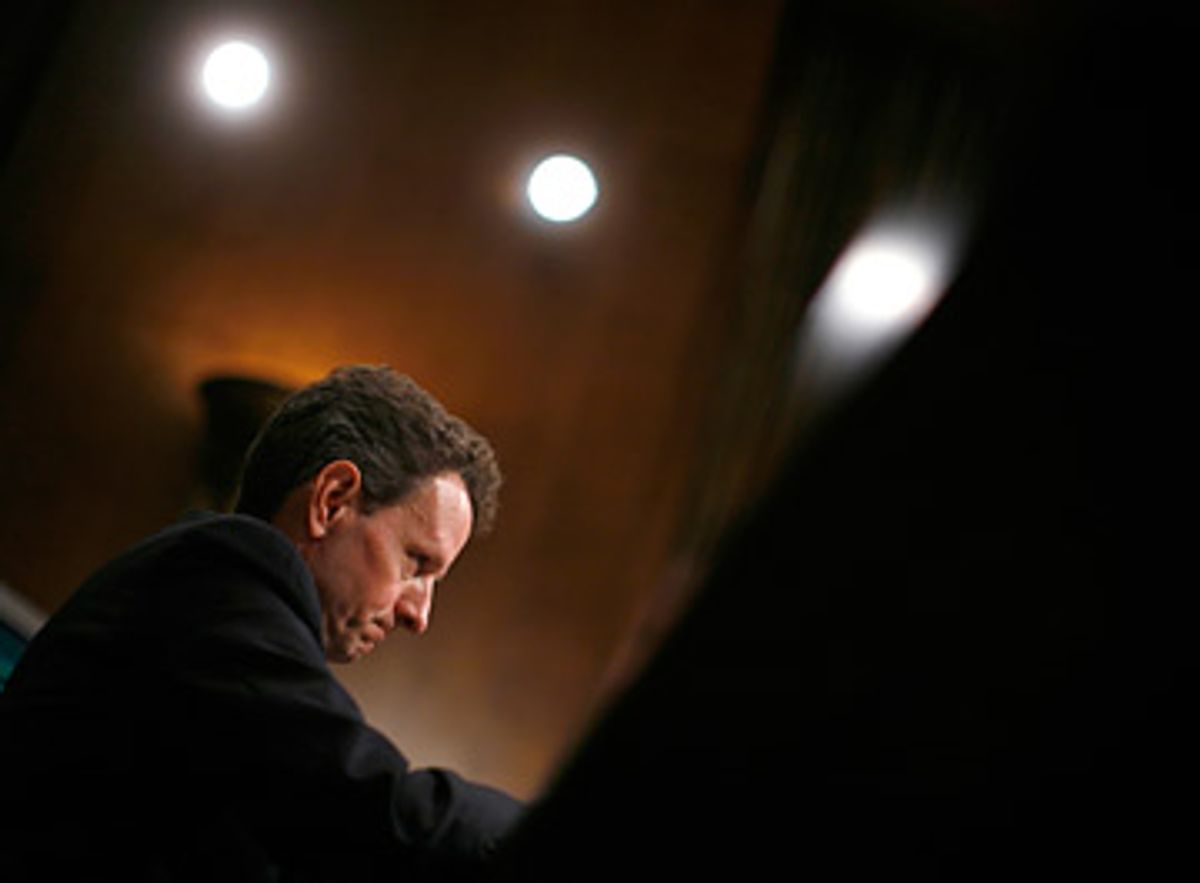 You know Treasury Secretary Tim Geithner is in a tough spot when one of the most compelling defenses of his plan to fix the banking system is that its inevitable failure will leave us no other option than bank nationalization. In this scenario, Geithner will have given it his best shot, but credit markets will remain stuck, and the big banks will be proven once and for all insolvent, since it will be clear that there are no buyers for the toxic mortgage-backed securities that are annihilating their balance sheets. At that point, President Obama can turn to Congress and the American public and say: We tried everything, but now there is only one alternative -- the most ambitious government takeover of banks in U.S. history.

Paul Krugman's position is that by choosing to delay the decision to nationalize, Obama is sacrificing the political capital he currently enjoys and thus will have less freedom of action in the future. (Krugman made the same case with respect to the insufficient size of the stimulus, although, if anything, Obama has proved steadily more ambitious in his policy proposals since the passage of the stimulus, not less.) But as Kevin Drum notes in Mother Jones, Krugman's assertion is debatable. Once there are no other options left on the table: "Far from making nationalization more difficult, [the Geithner plan's] failure would make it both inevitable and broadly acceptable."

Could this possibly be part of the Obama administration's political strategy? Or is the more common perception among the swelling ranks of Geithner's left-wing critics the real bottom line: White House economic policy is being dictated by incompetent Wall Street plutocrats, and we will all be the worse for it? It is sometimes hard to distinguish whether critics of Geithner are taking issue with the possible efficacy of his plan or the Wall Street-friendly politics of it. But Geithner's dilemma (if not his disaster) is that he could easily be both: a failure and a sellout. And then there's the Geithner paradox: The more euphoric Wall Street becomes (with an hour to go before the close of trading Monday, the Dow was up 370 points), the more suspicious his critics become that the plan stinks.

The hardest truth for Obama supporters to swallow about the Geithner plan is that it is essentially an extension of former Goldman Sachs CEO and Bush administration Treasury Secretary Hank Paulson's much derided scheme to end the credit crunch by having the government step in and buy all the toxic assets from the banks at inflated prices. But that much is undeniable. Paulson wanted to straighten out the balance sheets of banks by using government funds to initiate a process of "price discovery" that would bring liquidity to the frozen markets for mortgage-backed securities. Without getting bogged down in the details, that is precisely what the Geithner plan aims to do -- it clearly fits on a direct continuum with what Paulson outlined in his initial pitch to Congress for TARP authorization.

But there is at least one crucial difference. Geithner has delivered an actual, actionable plan to the American public and Wall Street. Hank Paulson never achieved even that much. In his testimony before Congress, Paulson could not explain how his plan would work, or how the government's efforts would encourage the private sector to get involved. Even more embarrassingly, once Congress did, after much agonizing, authorize TARP, Paulson abruptly abandoned his initial plan. Indeed, looking back at the Bush administration's strategy for dealing with the financial crisis, it is increasingly striking just how ad hoc and zigzag Paulson's approach turned out to be. Plans were proposed and abandoned. Companies were bailed out or left to fail without coherent explanation. From the very beginning, when Paulson told us that the subprime meltdown would be contained, to the very end of his tenure, there was never the sense that the Bush administration had a coherent strategy of any kind.

The same cannot be said of the Obama administration. Geithner's plan may well not work, and it may be too beholden to Wall Street, but its rollout has not been an exercise in helter-skelter chaos. In dealing with the economic crisis as a whole, the Obama administration has put into play a steady flow of initiatives that should, in theory, all work together. In addition to the stimulus, the housing plan and credit relief for small businesses, there's also been a budget proposal addressing long-term issues that even Paul Krugman found impossible not to praise. The Fed has been doing its part by engaging in its own extraordinarily broad-scale stimulative monetary policy.

All along, it has been universally agreed that the most glaring weakness of the Obama portfolio has been the lack of detail on how Geithner intended to tackle the banking system. But there is a difference between a lack of detail and utterly contradictory confusion. If we can hold our breath long enough to calmly assess the last two months, one can see that amid all the noise, the Obama administration has been moving carefully forward in one direction.

Geithner was very careful not to pin himself down on details during his confirmation hearing, except to say that the goal of his eventual plan would be to encourage more lending than would otherwise happen without government intervention. His first speech was widely criticized because he neither endorsed bank nationalization nor provided enough detail for Wall Street to chew on. But ever since that speech, he's done pretty much exactly what he said he would do. The banks are being stress-tested to determine their ability to survive an even worse downturn than we are currently experiencing. Capital will be made available to them to weather that storm. A "public-private" venture to create a market for toxic assets has been laid out. We have timelines and we have a strategy. The scheme outlined in the Treasury Department's white paper may share an intellectual heritage with Hank Paulson's original cockeyed dream -- except for a rather large difference. It exists. It is real. It will either work or it will not.

There is every reason to believe it will not work, and may even make things worse. There is every reason to doubt the fundamental assumption being made by the Treasury -- that the "true" value of the toxic assets is higher than their current market value (or, as the Treasury puts it, "there is evidence that current prices for some legacy assets embed substantial liquidity discounts"). There is more than enough evidence to support James Galbraith's cutting denunciation -- that it is "a Rube Goldberg device for shifting inevitable losses from the banks to the Treasury, preserving the big banks and their incumbent management in all their dysfunctional glory," and that "the cost will be continued vast over-capacity in banking, and a consequent weakening of the remaining, smaller, better-managed banks who didn't participate in the garbage-loan frenzy." The government is taking a big risk, and there is no guarantee that it will pay off. Meanwhile, the very same Wall Street speculators who helped wreck the economy are getting a big assist from the government to try to profit off the fix-it plan. That just doesn't sit right with anyone except a hedge fund manager.

But all the Sturm und Drang expressed hither and yon about how the Obama administration is damning us all to a decade or more of economic doldrums by not pursuing immediate bank nationalization today is just a bit overwrought. The U.S. economy is not going to stop shedding a half-million jobs a month if we nationalize Citigroup today, instead of two months from now. We are deep in a recession and it will be quite a while before we crawl out of it. Two months of caution do not mandate a "lost decade." Indeed, we will know in a matter of months whether the Obama administration's current efforts are gaining any traction, and if they aren't, then there will be no other alternatives. Perhaps the smartest thing that Geithner's critics could do is just step aside and let him fail.